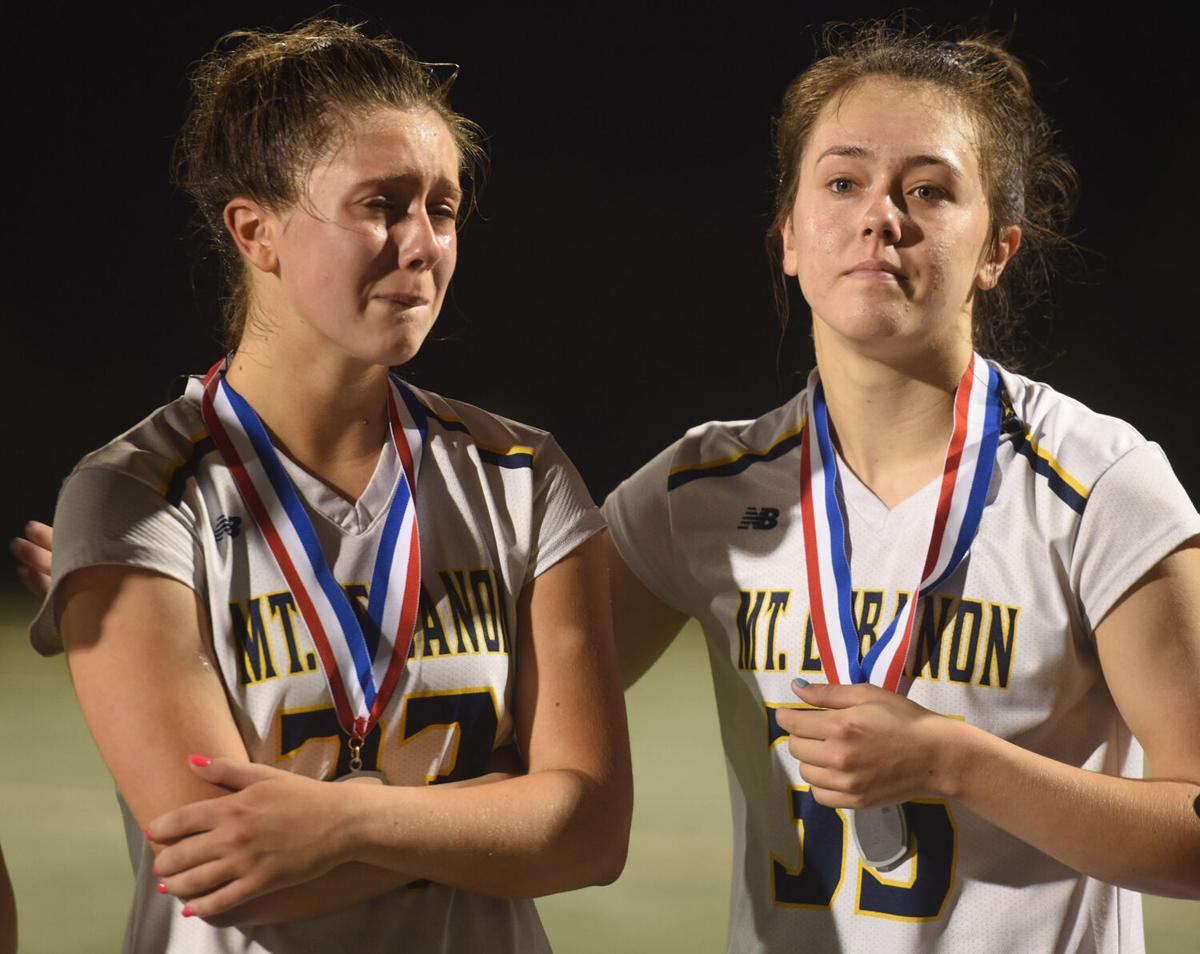 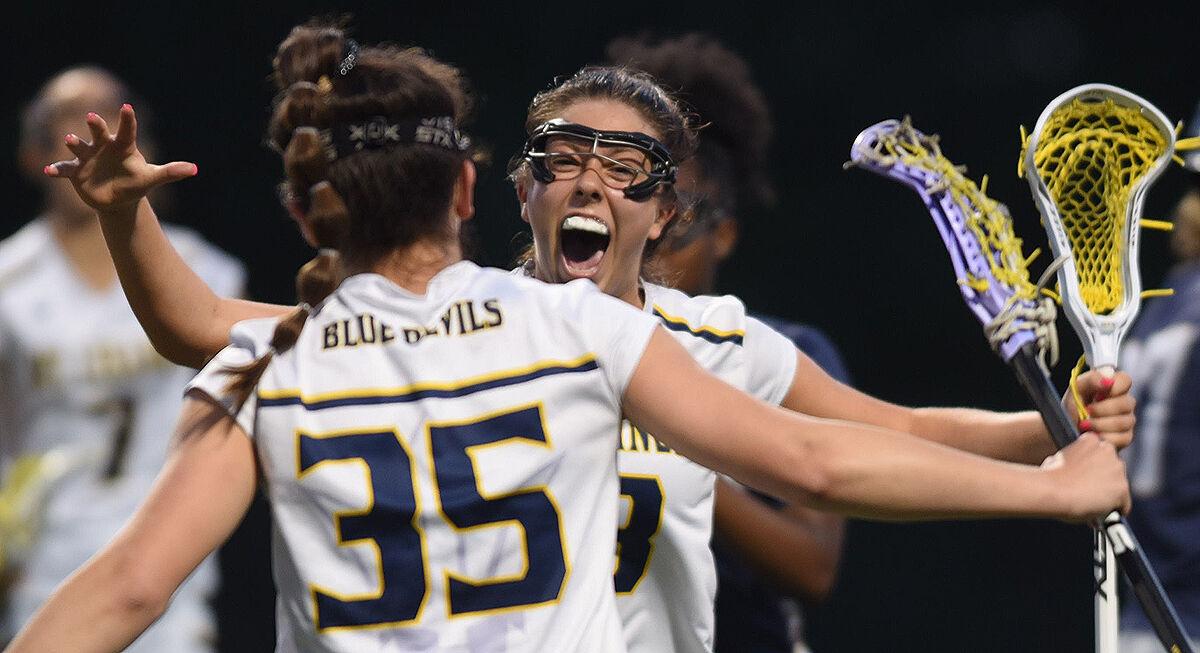 A jubilant Reagan Murdoch rushes into the waiting arms of her sister, Addie, after scoring one of her six goals in the WPIAL Class AAA championship game. 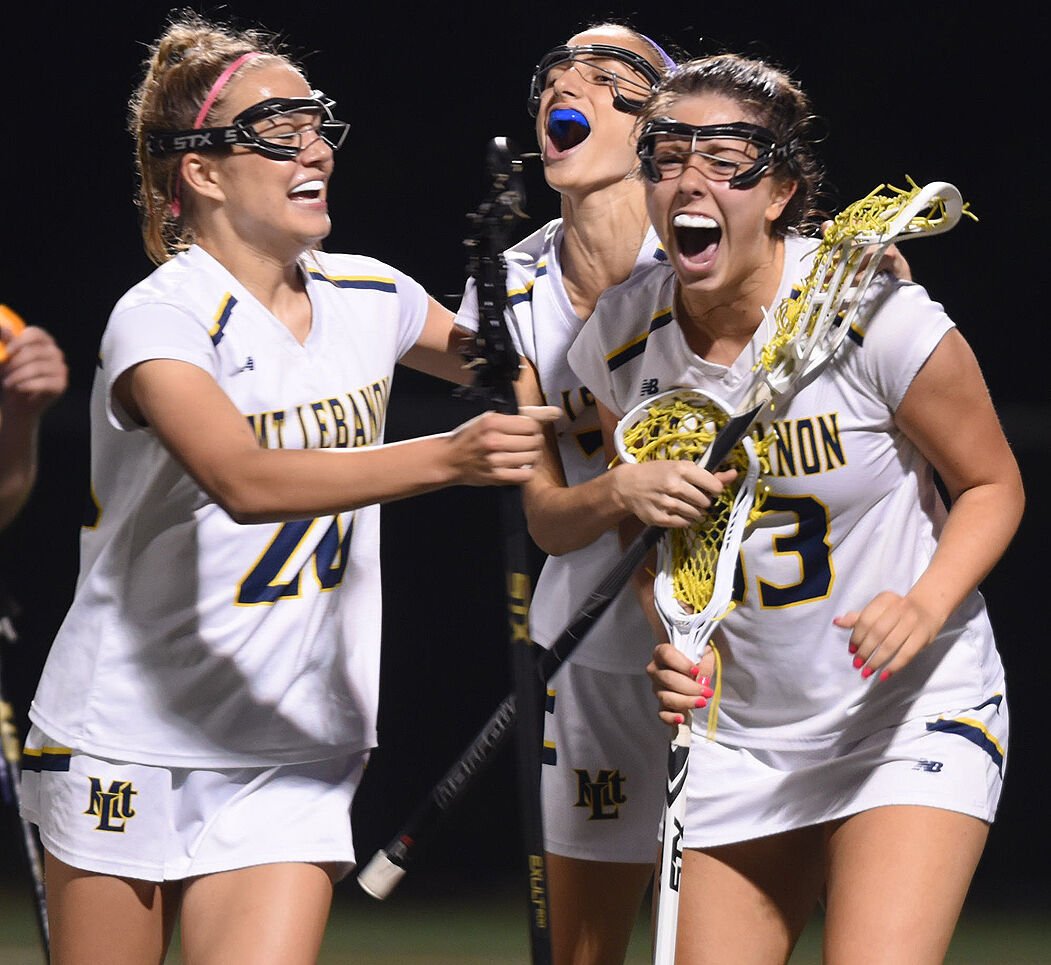 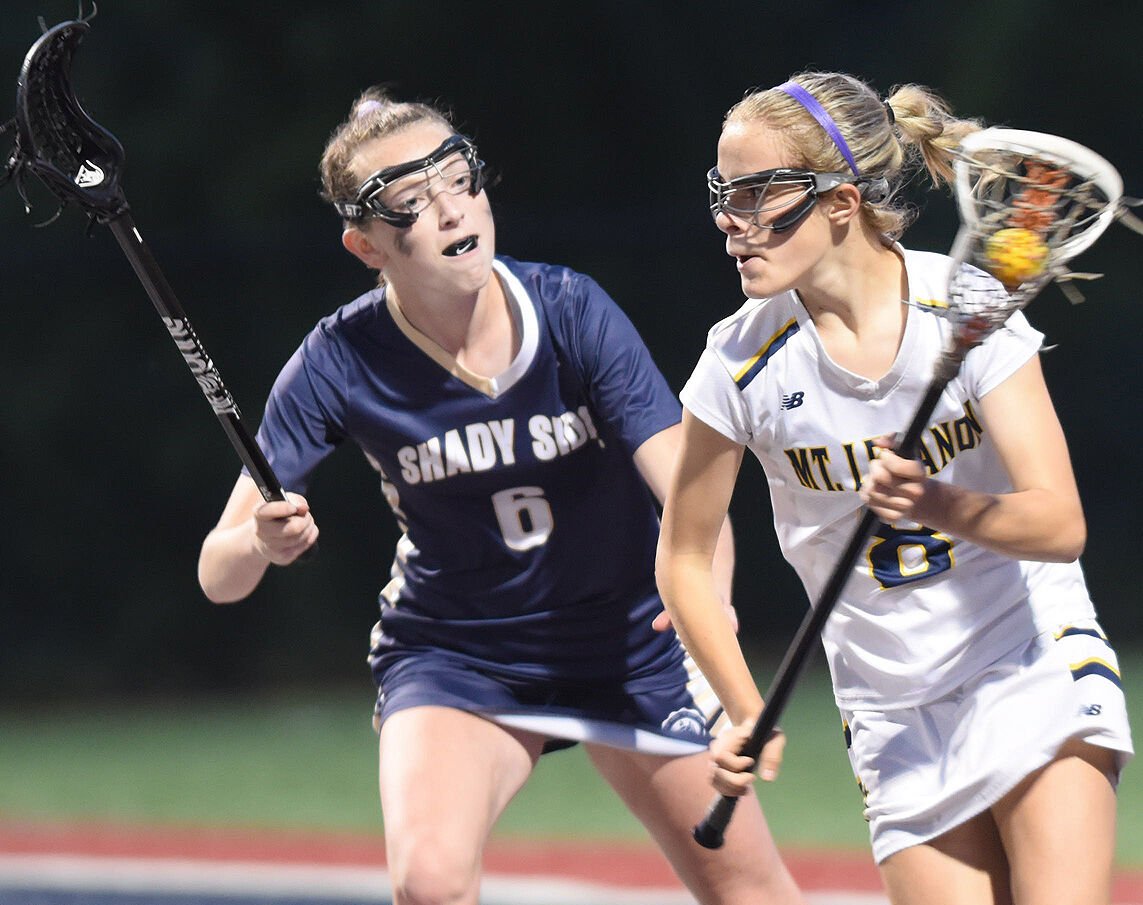 Mt. Lebanon’s Lillian Girod cradles the ball while being defended by Shady Side Academy’s Autumn Casey during the WPIAL Class AAA championship game. 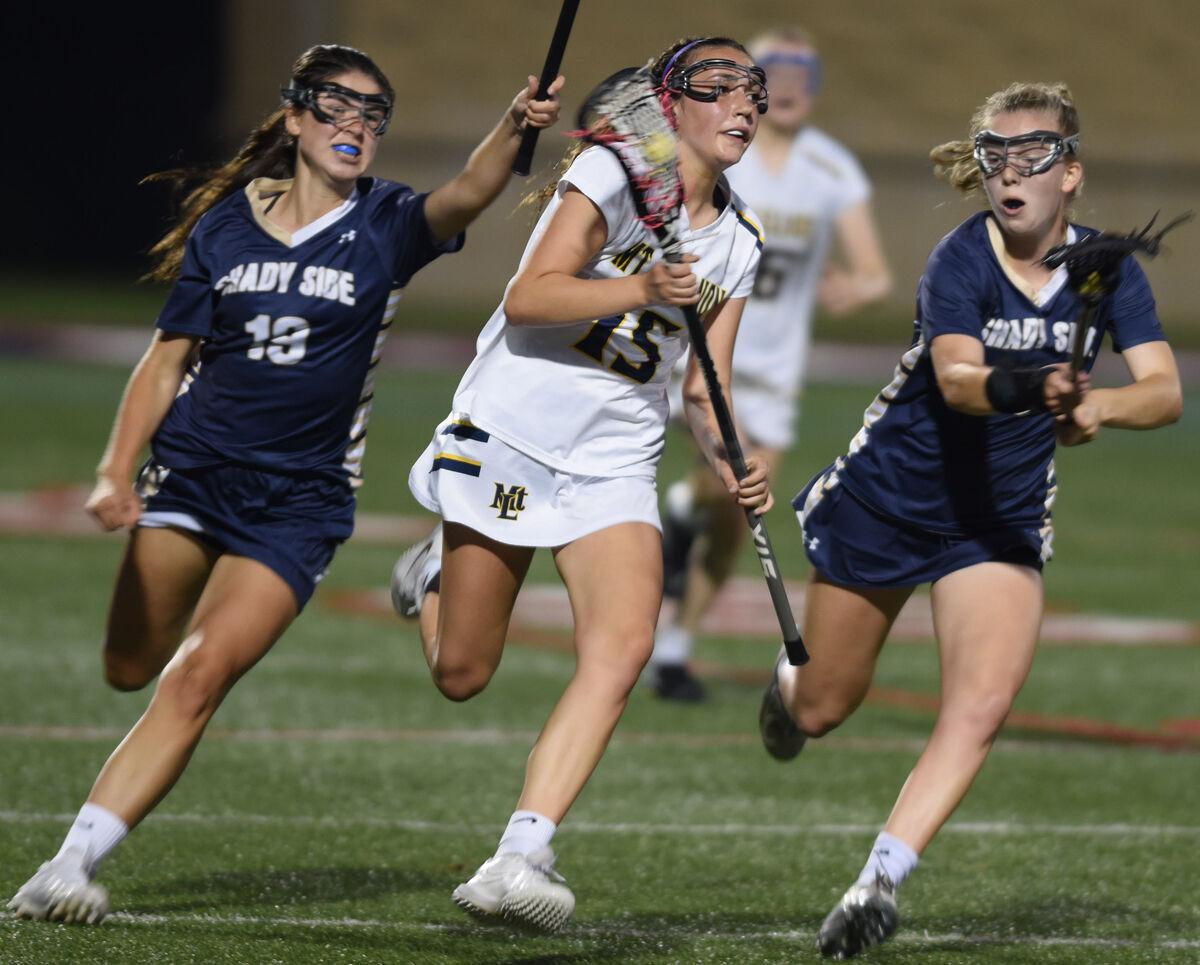 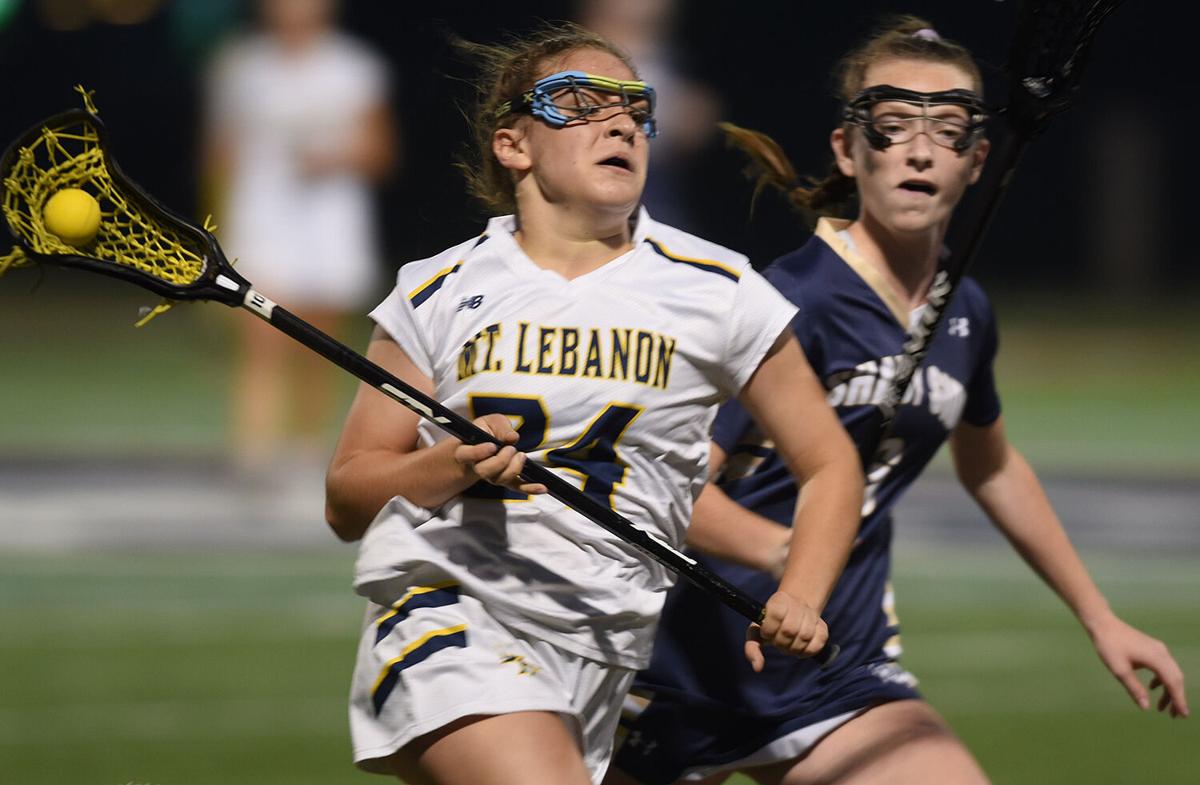 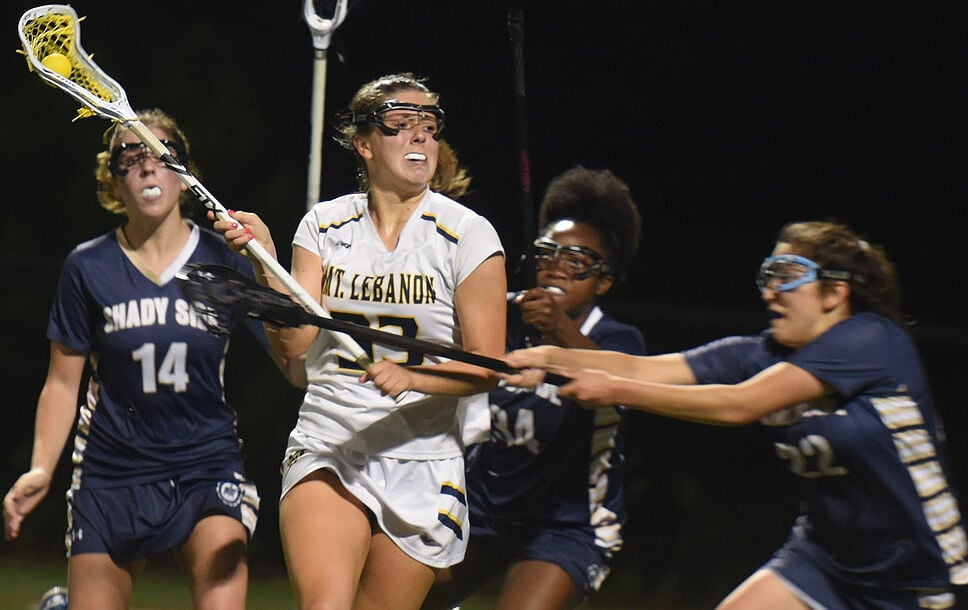 A jubilant Reagan Murdoch rushes into the waiting arms of her sister, Addie, after scoring one of her six goals in the WPIAL Class AAA championship game.

Mt. Lebanon’s Lillian Girod cradles the ball while being defended by Shady Side Academy’s Autumn Casey during the WPIAL Class AAA championship game.

Reagan Murdoch’s six-goal effort went for naught as the Mt. Lebanon girls lacrosse team was unable to hold off Shady Side Academy, which came from behind to defeat the Blue Devils 9-8 and win the WPIAL Class AAA championship May 26 at Robert Morris University’s Joe Walton Stadium.

“It is not a wasted effort but a great effort by Reagan that just didn’t come to fruition,” said Lebo coach Brian Kattan.

Murdoch scored five of her six goals in the second half as the Blue Devils traded leads with the Bulldogs six times. An American University commit, Murdoch afforded Lebo an 8-7 advantage with 3:06 remaining.

“The whole thing is disappointing,” Kattan said. “We wasted a great defensive effort, too, because they are a great offensive team. Everybody played their hearts out. It’s unfortunate that we ran into Shady Side.”

The Blue Devils proved to be unlucky in the final two minutes as they turned the ball over attempting to run time off the clock in their offensive end.

Cat Johnson scored the tying goal for Shady Side with 61 seconds to play.

Jenny Woodings capped a four-goal, one-assist performance for the Bulldogs by punching in the game winner with 26.8 left on the clock.

“The turnover was a killer,” Kattan said, “but they weren’t giving up. Shady Side played a great game. They are a really great team. We knew they were going to put pressure on us and we just made a bad turnover. It happens at times. It just happened at the wrong time.”

The Blue Devils opened the first half by racing out to a 3-1 lead but relinquished it in just 30.5 seconds. By then, Woodring had registered the hat trick.

In the opening minutes of the second half, however, back-to-back goals from Murdoch launched Lebo back into the lead, 5-4.

CeCe Messner would rally the Bulldogs. She gave Shady Side a 6-5 lead with her second goal with 15:27 to play. She completed the hat trick to tie the game at 7-7 with 6:26 to play.

SSA improved to 15-1 overall and grabbed its second title in school history. The Bulldogs won the 2019 championship but could not defend because the 2020 season was canceled by the coronavirus pandemic.

Lebo dropped to 16-2 overall. The Blue Devils were seeking their sixth district title, having won the first three championships from 2004-06 and in 2014 and 2016.

“This game does not define our season,” Kattan said of the 2021 final. “We had a great season and need to think about that. We just ran into a really, really good Shady Side team.”

The Blue Devils will now challenge for a state championship as they are qualified for the PIAA tournament. Lebo is scheduled to play June 1 against the District 6 or 10 champion in the first round of the playoffs.

“We will be ready,” Kattan said. “We have another chapter to write.”