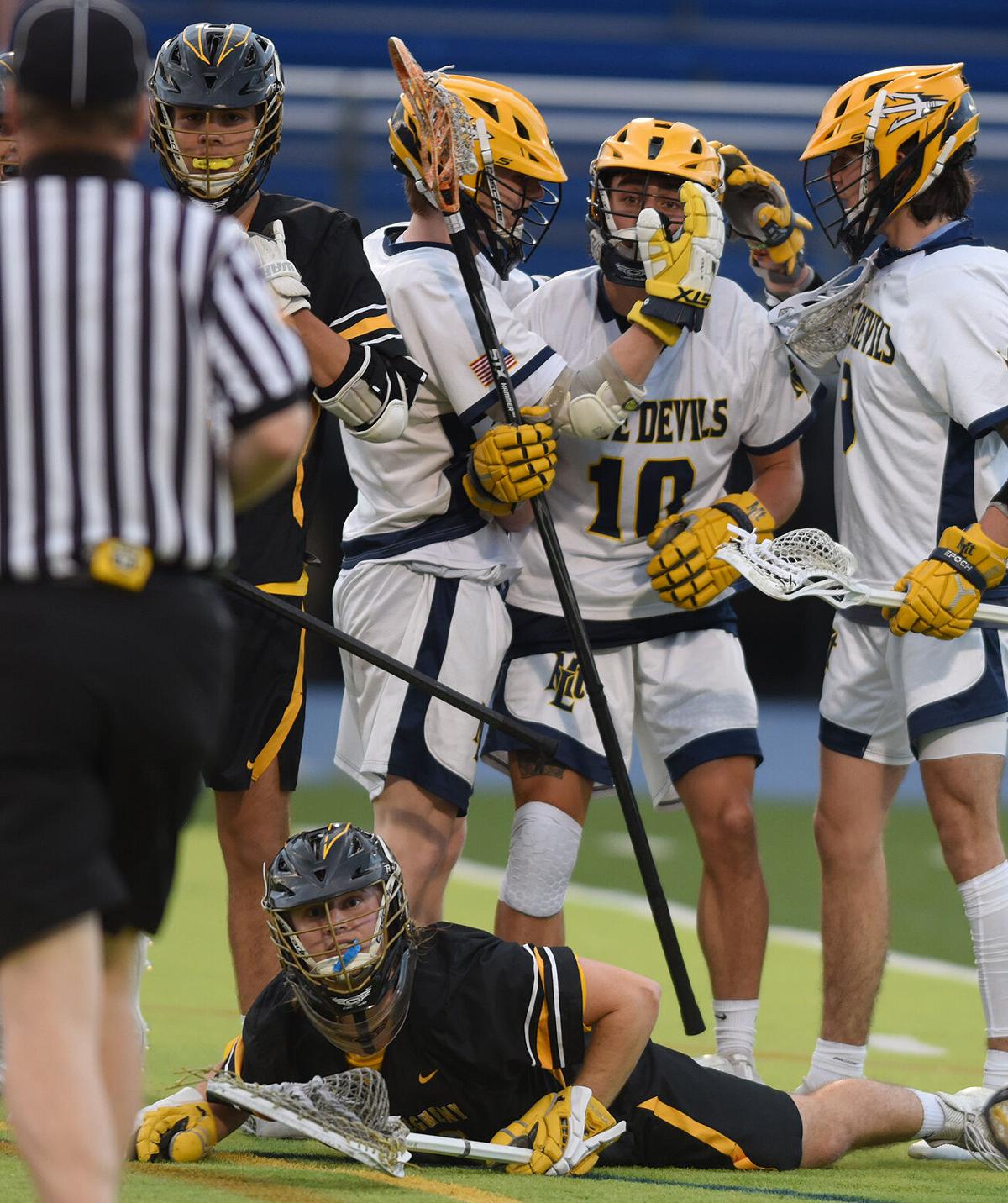 North Allegheny players, including goalie Aiden Miller, as well as Mt. Lebanon's Joe Gibbons look for the official to rule on the legality of his goal as teammates congratulate him. While the score counted and tied the contest in the first frame, the Tigers went on to beat Lebo, 11-9, in the WPIAL Class AAA semifinals played at Canonsburg Memorial Stadium. 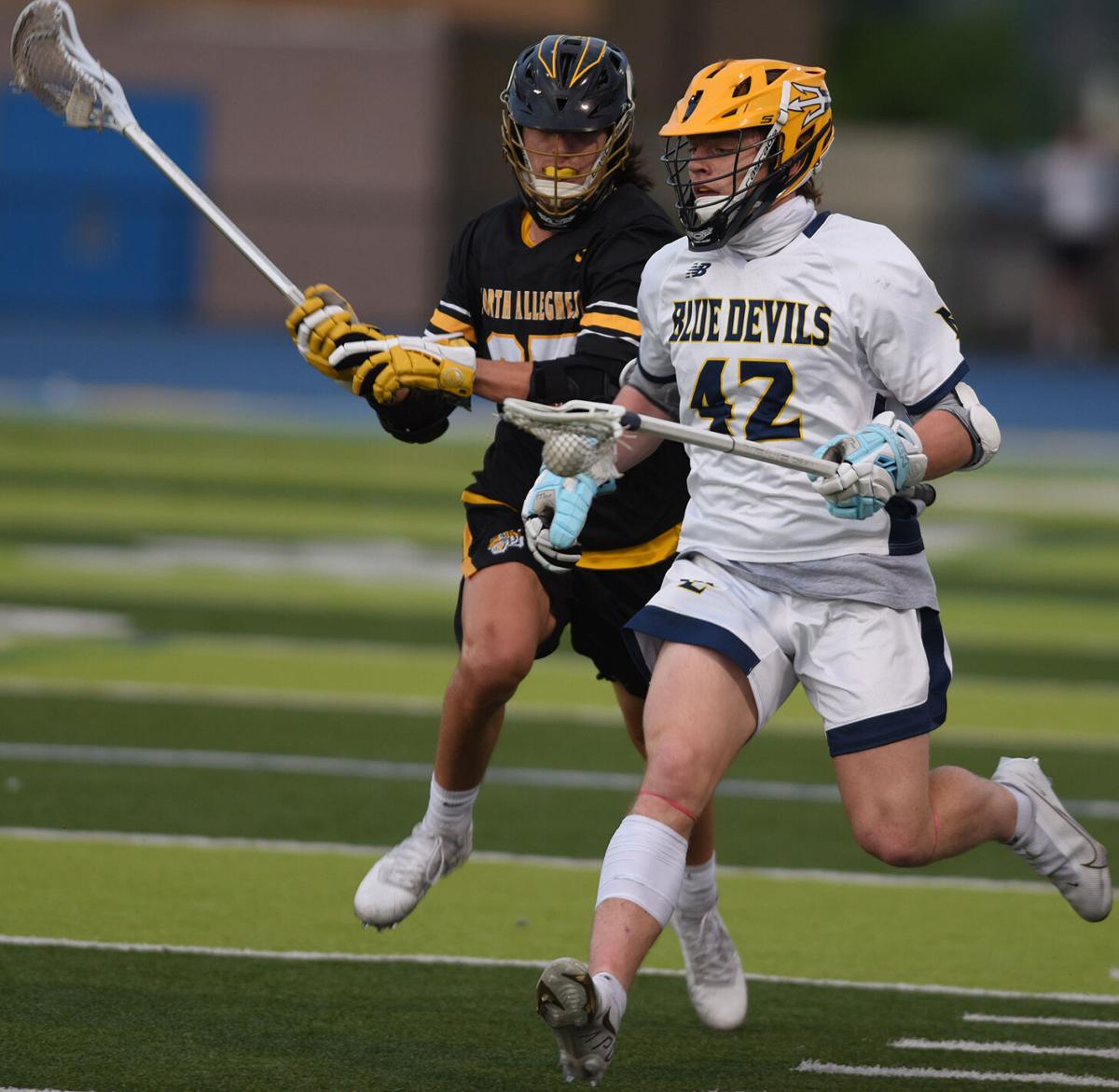 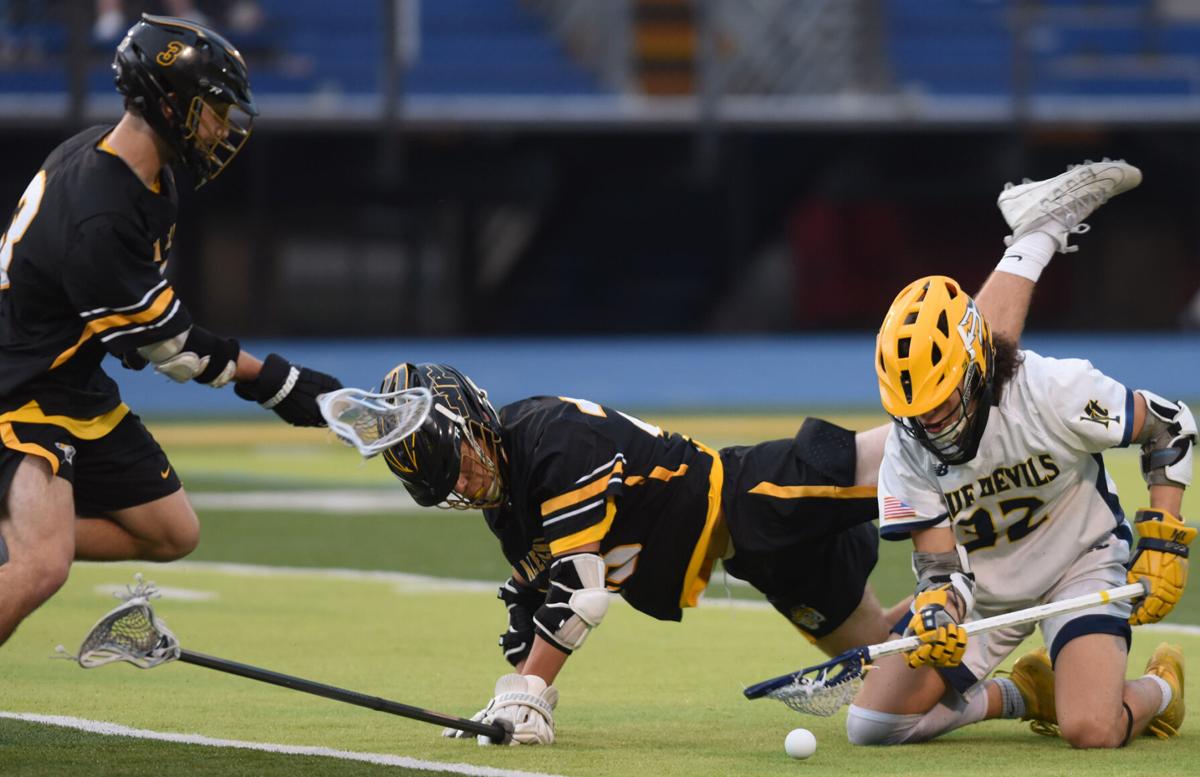 North Allegheny players, including goalie Aiden Miller, as well as Mt. Lebanon's Joe Gibbons look for the official to rule on the legality of his goal as teammates congratulate him. While the score counted and tied the contest in the first frame, the Tigers went on to beat Lebo, 11-9, in the WPIAL Class AAA semifinals played at Canonsburg Memorial Stadium.

When it comes to analyzing an outcome of a lacrosse match, Mt. Lebanon head coach Mike Ermer becomes philosophical.

Ermer believes the sum of Lebo’s actions, not particular plays, resulted in the Blue Devils’ 11-9 loss to North Allegheny in a WPIAL Class AAA semifinal game played May 24 at Canonsburg Memorial Stadium.

For example, the goal the Blue Devils surrendered with 25 seconds left in the third quarter factored into the defeat, but did not cause the loss.

“Every goal counts the same,” Ermer said. “Some say some count for more than one. But we lost by two. That was just one people see and they say, ‘hey look at that’”

Lebo also lost its share of faceoffs, but not every single possession contributed to the defeat.

“Possession is nine/tenths of the law,” Ermer said. “You get the ball, good things happen. You don’t get the ball, things don’t work out for us.

“I never look at one particular play and say that was the play,” he added. “There are hundreds of plays throughout the game that can go either way.”

“They outworked us on ground balls,” he said. “I tip my hat to them. Ground balls win championships.”

Because NA won the ground-ball war, the Tigers earned the right to battle Shady Side Academy for the WPIAL title.

Though Lebo forged ahead, 4-3, after the first quarter, the Tigers dominated the second. North Allegheny scored four goals within a 2:44 span to take a 7-4 lead.

Though Lebo tied the match, 8-8, when Brodie Campbell scored off a rebound, NA ignited another rally when Christian Tedder scored off an assist from Cole Bordo with 25 seconds left in the third quarter.

Bordo capped a five-goal performance with a tally that afforded NA a three-goal advantage with 8:26 to play. Bordo also picked up two assists in the game.

Campbell fired in four goals for the Blue Devils, including the final tally with 1:46 to play.

Somber had two assits for the Blue Devils, whil Gus Cramer and Wertz added assists of their own.

Upper St. Clair ended its season at 11-4 overall after falling to Shady Side Academy, 20-13, in a Class AAA boys semifinal game.

The Lions jumped off to 2-0 lead on goals from Logan Purdy and Brandon Waskowiak.

After the Planets tied the match, Waskowiak scored, giving the Lions a 3-2 edge at the end of the first quarter.

Dimitri Gonzalez helped the Lions to a 4-2 advantage with a goal, but Mars vaulted into the lead with four unanswered goals before Justin Vezzi cut the margin to 6-5. The Planets erupted for another five-goal explosion before Gonzalez snapped the run.

The Planets advanced to the finals to face Chartiers Valley, a 7-6 winner against North Catholic.