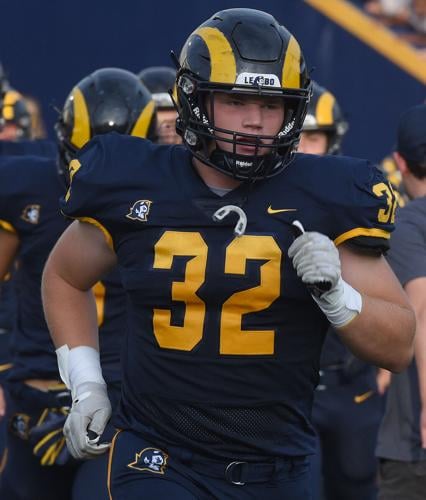 Grayson Dee (32) is one of the seniors that have helped Mt. Lebanon turnaround a 2-5 start and qualify for the WPIAL Class 6A football playoffs. The Blue Devils host Central Catholic at 7 p.m. Nov. 11. 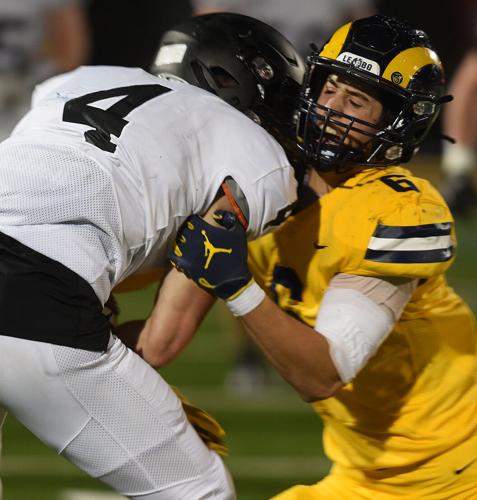 Alex Gevaudan (6) is one of Mt. Lebanon’s unsung heroes, taking on tough assignments as blocking Upper St. Clair’s top receiver, Adian Besselman (4). Gevuadan has the Blue Devils contending for a WPIAL championship. They will host Central Catholic at 7 p.m. Nov. 11 in the Class 6A semifinals. 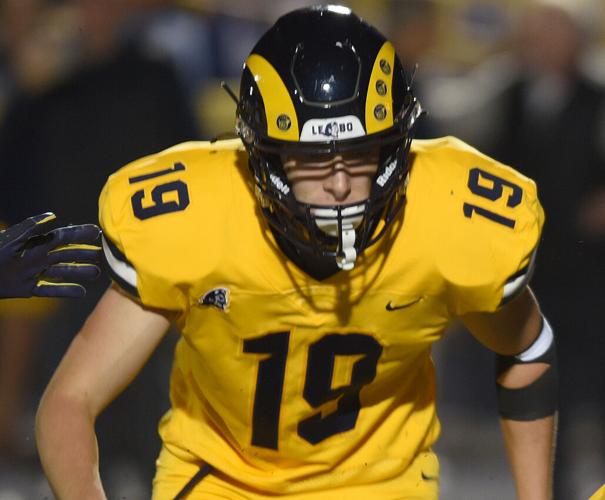 Michael Beiersdorf (19) of Mt. Lebanon has made an impact offensively as the team’s second-leading receiver and on defense with two interceptions and a fumble recovery this season. 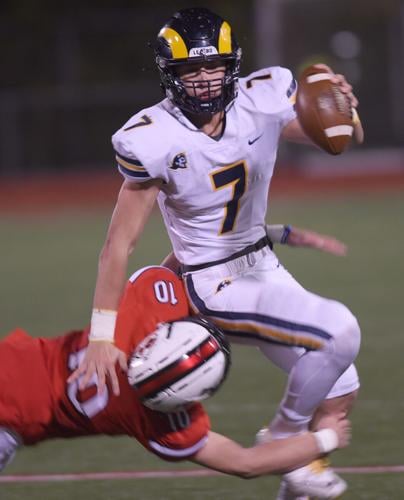 David Shields (7) scrambles for yardage in a non-conference contest against Peters Township earlier this season. The sophomore leads the Mt. Lebanon offensive attack, passing for 979 yards and seven touchdowns.

Grayson Dee (32) is one of the seniors that have helped Mt. Lebanon turnaround a 2-5 start and qualify for the WPIAL Class 6A football playoffs. The Blue Devils host Central Catholic at 7 p.m. Nov. 11.

Alex Gevaudan (6) is one of Mt. Lebanon’s unsung heroes, taking on tough assignments as blocking Upper St. Clair’s top receiver, Adian Besselman (4). Gevuadan has the Blue Devils contending for a WPIAL championship. They will host Central Catholic at 7 p.m. Nov. 11 in the Class 6A semifinals.

Michael Beiersdorf (19) of Mt. Lebanon has made an impact offensively as the team’s second-leading receiver and on defense with two interceptions and a fumble recovery this season.

David Shields (7) scrambles for yardage in a non-conference contest against Peters Township earlier this season. The sophomore leads the Mt. Lebanon offensive attack, passing for 979 yards and seven touchdowns.

Less than three weeks away from Thanksgiving and Bob Palko is already counting his blessings. After a 2-5 start, his Mt. Lebanon football team qualified for the WPIAL playoffs.

“We are grateful to be in the tournament and to be hosting,” said Palko, who coached the Blue Devils to last year’s WPIAL title as well as a PIAA championship. We happened to be invited to the prom and now we have a chance to dance with the queen. We are very honored.”

The Blue Devils slipped into the playoffs by blanking Canon-McMillan, 31-0, in the final regular-season game.

With the win, Lebo improved to 2-2 in the Tri-County Five Conference. Central Catholic also finished 2-2 in the conference, which was won by North Allegheny (4-0, 9-1).

The Blue Devils and Vikings are familiar foes.

Lebo beat Central Catholic twice during their championship run in 2021. The Blue Devils also used a walk-off field goal by Ben McAuley to edge the Vikings, 17-16, on Sept. 16. In the game, Lebo trailed 16-0 before rallying for the victory.

Palko acknowledged that drawing Central Catholic as a first-round opponent was “out of the control” of the Blue Devils and that the only way to compete is to prepare to face a team that was considered one of the top teams in Class 5A in the state at the start of the season. The Vikings, like the Blue Devils, have won their last three games.

“We know how good they are and what they have done. Plus, they have that whole revenge thing and that’s going to be their rallying cry,” Palko added. “We have to prepare the best we can. Come up with a game plan that is going to enable us to go in there and compete and hopefully play well enough to win.

“At the end of the day, we all have goals and aspirations but it will all depend on what we can control and how well we play. Obviously, we can’t control the talent Central has and they have changed defensive coordinators and other things since we played them.”

The Blue Devils are a different club as well. They are healthier than when they played the Vikings.

Back in the lineup is Kade Capristo. The all-state lineman and Richmond recruit missed several starts because of a severe ankle injury. Additionally, Johnny McGhee, Nate Sala, Frank Tinnemeyer and Mike Beiersdorf are recovered significantly from their nagging injuries.

“We are healthy,” Palko said, “but the injuries forced us to develop depth and some of our younger players. They were up to the task and have come along way.

“Johnny really made some big plays against Canon-Mac. Mike has been learning to play two ways. Frank has been banged up all year but he’s ready to roll. And Nate, people don’t see the impact he makes, especially on defense. He’s solidified us.”

Ten games into the season and the Blue Devils are still discovering who they are. Palko says that playing football is not like playing individual sports like tennis or golf.

“Football is a team sport and we count on 10 other guys to make a play work. It takes time. We are still learning to play together as a team, our strengths and weaknesses, and meshing personalities together. That’s one of the most important things. Developing an identity as a team. We hope we continue to get better at that and do the things necessary to be successful.”

In beating the Big Macs, Lebo did several things well, particularly on defense as Fred Lasota had a pick-6 for 30 yards and Cole Marker returned a fumble 22 yards for another touchdown. Sophomore quarterback David Shields hooked up with Beiersdorf for a 79-yard scoring strike. Sala rushed for a 52-yard touchdown and McAuley kicked a 27-yard field goal.

Shields has completed 85 of 146 passes for 969 yards and seven scores. Sala is the leading rusher with 327 yards on 59 carries. Garrett Pavlick is the top target with 451 yards on 26 receptions.

Beckham Dee, who ranks second in rushing with 320 yards and three scores, is the top defender with 50 tackles, four sacks and one interception.

“Defensively, we have to not give up the big plays and make them earn everything they get and we need to establish our offense so as to keep the ball away from them because they are very dangerous,” Palko said.

Palko also believes that turnovers and penalties will factor into the outcome.

“They are always huge in games like this. You can’t run from them but you can play smart and be disciplined enough to not have the penalties like offsides. I don’t mind the hustle penalties but the one that you can control that drive you crazy are the ones you commit because of lack of discipline.”

Lebo has no lack of desire. Palko has been pleased with the passion players like Will Hartung, David Tower, Michael Devauden, Anthony Pietragallo, Grayson Dee and Beckham Dee have displayed throughout the season.

“Will has been marvelous. David has been playing at a high level and Michael has been lights out,” Palko said. “I can’t say enough about those three. They are doing all the dirty work behind the scenes.

“I could name all the guys but those (mentioned players) immediately pop into my head when I think of their intensity, what kind of teammates they are and how hard they work. I can’t tell you how important it is to have guys like that on your team. Guys that really care, put the time and effort in and lead by example. They have that it factor and it’s through the roof. You win with guys like that.”

That statistic is most precious to Palko.

“The last time I checked, the W and the L is what counts,” he said.