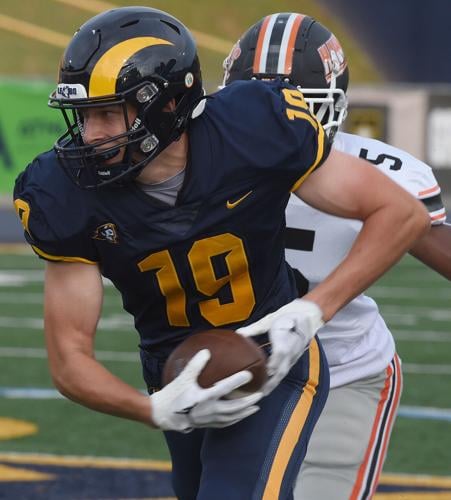 Mike Beiersdorf (19) is one of the players to watch on defense when Mt. Lebanon hosts arch rival Upper St. Clair at 7 p.m. Sept. 30. Beiersdorf had a Pick-6 that helped propel the Blue Devils to a come-from-behind victory, 17-16, against Central Catholic in the conference opener. 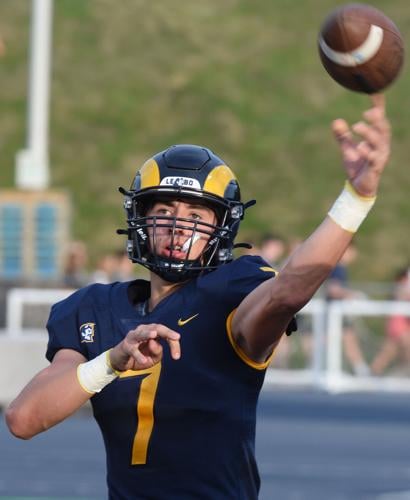 David Shields (7) will be a focal point of the Mt. Lebanon offense when the Blue Devils take on rival Upper St. Clair at 7 p.m. Sept. 30 in non-conference football action. The Blue Devils are coming off a big win against Central Catholic, 17-16, where Shields tossed a 26-yard scoring strike to Fred LaSota before Mike Beiersdorf had a Pick-6 and Ben McAuley kicked the game-winning field goal on the final play.

Mike Beiersdorf (19) is one of the players to watch on defense when Mt. Lebanon hosts arch rival Upper St. Clair at 7 p.m. Sept. 30. Beiersdorf had a Pick-6 that helped propel the Blue Devils to a come-from-behind victory, 17-16, against Central Catholic in the conference opener.

David Shields (7) will be a focal point of the Mt. Lebanon offense when the Blue Devils take on rival Upper St. Clair at 7 p.m. Sept. 30 in non-conference football action. The Blue Devils are coming off a big win against Central Catholic, 17-16, where Shields tossed a 26-yard scoring strike to Fred LaSota before Mike Beiersdorf had a Pick-6 and Ben McAuley kicked the game-winning field goal on the final play.

Though the football game happened more than three decades ago, Mike Junko remembers Upper St. Clair shutting out Mt. Lebanon, 14-0, as if it was yesterday.

Back then, Lebo was ranked No. 4 in the country by USA Today and Junko was the quarterback on a USC team that eventually played for a WPIAL championship that fall.

“While it was a great night for our team, I did not have a great night personally,” said Junko. “It was an old-school Jim Render three yards in a cloud of dust kind of game. The passing game was almost . While I hate to admit it, my greatest contribution was probably punting the ball. We won the field position battle all night.

“My friends and I still remember that night and the indelible mark it left on our collective memory,” added the 1992 USC graduate.

Junko is still at USC. Now as head coach, he is preparing the Panthers for a non-conference clash against their arch rivals.

Though a non-conference clash, Lebo vs. USC is the classic “backyard brawl” like college games such as Alabaman vs. Auburn or West Virginia against Pitt, says Lebo coach Bob Palko.

“In the big scheme of things, because it’s a non-conference game, it doesn’t mean anything, but when you talk about community and pride, it means a lot because of the great teams and history they have had at both schools.”

Not until he became the head coach of the Blue Devils in 2019, did Palko realize how fierce the rivalry is.

“Then you find out,” he said. “Whether the teams are playing tiddilywinks or darts, it would be a rivalry. It’s neat that the communities have that. We have the utmost respect for them.”

Palko has deep regard for Junko, too. He had gotten to know the family because his son, Tyler, played at the University of Pittsburgh.

Junko’s dad, Bob, spent 29 of his 54 years of coaching at Pitt before retiring this spring. He was a defensive coordinator and later served as the director of player development and high school relations.

“I have the utmost respect for Mike and his family,” Palko said. “He’s had to follow Render and he has established what he believes in. And, it’s working.

“I watch and learn from (Junko). The way his teams go about their business, how they gear up for games and how they work.”

By starting the season with four consecutive victories, including a 49-7 triumph against Fox Chapel on Sept. 16, USC has worked its way to the top of the rankings in Class 5A. They are also No. 8 in the state.

The win against the Foxes avenged a first-round playoff loss, 13-10, last season. Highlights from the game included a 176-yard rushing performance by Jamaal Brown, who gained 73 of those on a TD run; three TD passes from Julian Dahlem to Aidan Besselman, Jacob Hufnagel and Cody Marn; two TD aerials from Ethan Hellman to Cameron Phillips; a pick-6 by Besselman and seven extra points from Bennett Henderson.

“Our kids played focused and exorcised some demons that had haunted us,” Junko said. “Picking up the win helps us move forward now that that game is behind us.”

Lebo took a huge step forward when the Blue Devils came from behind to knock off Central Catholic, 17-16, in their Tri-County Five Conference opener Sept. 16 at CMU’s Gesling Stadium.

The Blue Devils overcame a 16-0 deficit to defeat the Vikings. Fred LaSota pulled in a 26-yard scoring strike from David Shields. Shields also hooked up with J.P. Walters for the two-point conversion. Mike Beiersdorf then picked off a Central pass and returned it for a 38-yard touchdown. Ben McAuley kicked an 18-yard field goal to clinch the win as time expired.

The win over Central was the third in a row for the Blue Devils. They beat the Vikings in last year’s conference clash as well as in the WPIAL Class 6A championship game. Lebo went on to complete a 15-0 season that included a PIAA title, a first in school history.

“What happened last year was awesome. We were humbled and blessed,” Palko said. “But that’s been over and the kids have been working hard at establishing their own chemistry, work ethic and mantra. Our job as coaches is to get this team prepared to be the best it can be.

“We felt that the (Central) win was a good thing but if we lost, we still played well enough to establish certain standards moving forward.

“A win can mask some things that still need to be worked on,” he continued. “We are not closing our eyes or running from the things that we did not do well. The kids realize they need to continue to work and get better.”

While the win against Central provided a tremendous uplifting feeling, it did not distract from the main ingredient that defines this year’s Blue Devils.

“The thing I admired is the way the kids hung in there,” Palko said. “They did not quit, did not stop. That’s the great lesson we take away from the win.

“As coaches, we try to guide them, teach and move them along but it’s all up to the leaders on the team to look at the game, digest it and be comfortable with the effort and outcome. It wasn’t the prettiest but the cool thing is we came out with the win.”

A win for USC or Mt. Lebanon in the rivalry classic means little in the standings. It is a non-conference showdown but it does little to alter prep work for the game.

For the Panthers, the marquee matchup comes in between games against Peters Township on Sept. 23 and Bethel Park on Oct. 7.

“We really don’t give much thought to where games land on our schedule. It just is what it is,” Junko said.

“Mt. Lebanon is the defending state champion and they already defeated this year’s 6A favorite Central Catholic in Week 3. We will prepare for that game like we would any other on our schedule.”

Junko added that all his players are geared up for the battle.

“It is every kid’s dream to get to play in a game like this,” he said.

Beside being a player, Junko once served as an educator and as a football coach at Mt. Lebanon. He said he remembers working with a great group of coaches and players.

“They gave me the opportunity to coordinate and advance my career. Many good people came alongside me to help make me a better teacher and a better coach,” he said.

Junko predicts that Shields and his artillery will be key to the outcome of the game.

“Mt. Lebanon’s quarterback seems to be improving with each new game. He is a really talented kid that has a number of weapons at his disposal.

“They have also found their running game as of late and they will be difficult to contain,” Junko added.

“Offensively we have to deal with an opportunistic defense that loves to bring pressure from all angles. Our kids need to be assignment sound or they will really make you pay.”

In four games this fall, USC’s own defense has made the opposition pay. The Panthers have outscored the opposition, 181-34. The defense is limiting opponents to 8.5 points per game, has eight interceptions and four forced fumbles.

“We are preparing for USC like every game,” Palko said. “We’ll do the best we can. Without a crystal ball, I can’t predict what will happen but we are just very honored to be part of a tradition and a rivalry like this. You have to take it all in.”