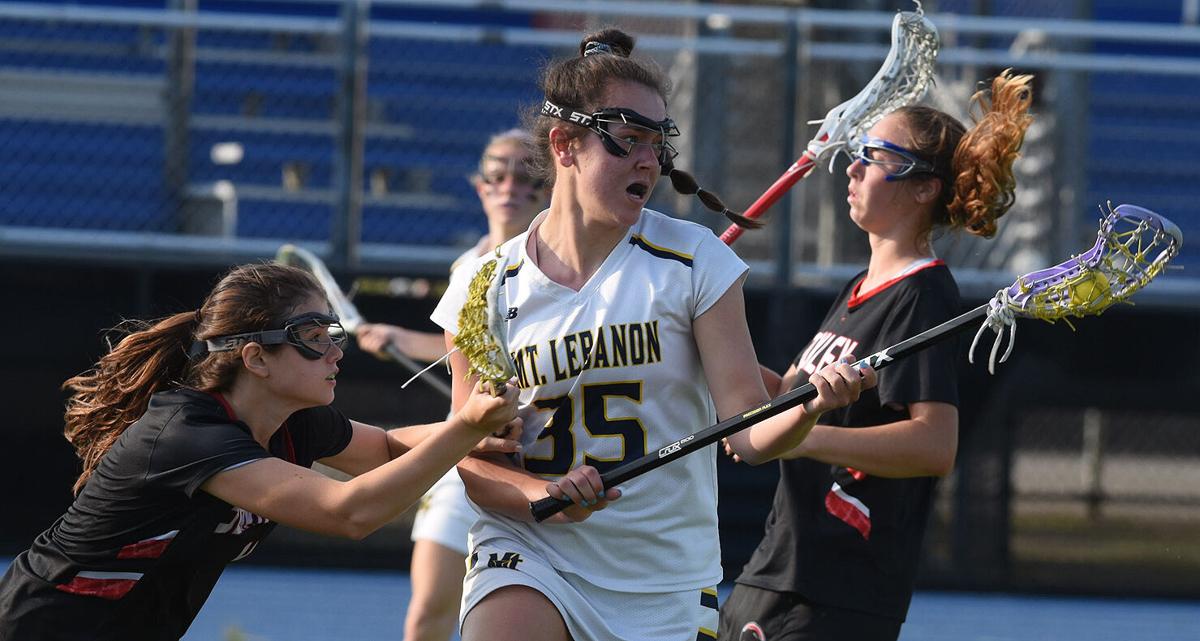 Mt. Lebanon’s Addie Murdoch holds off a Sewickley Academy defender as she makes her move to the goal. 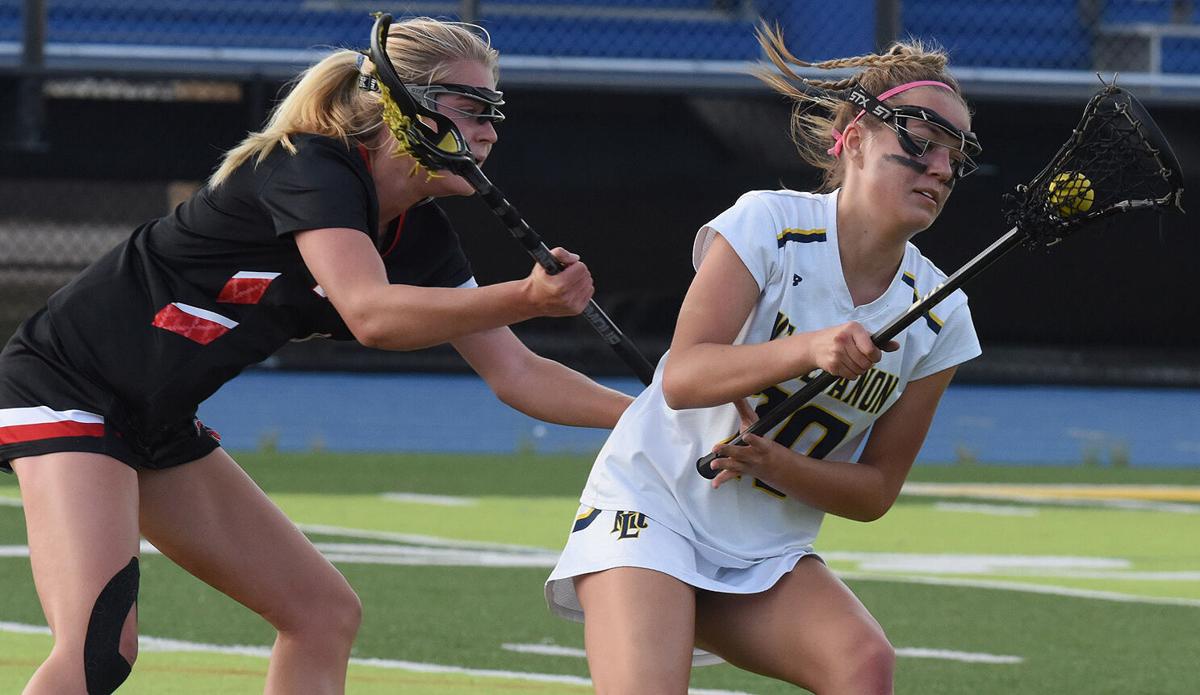 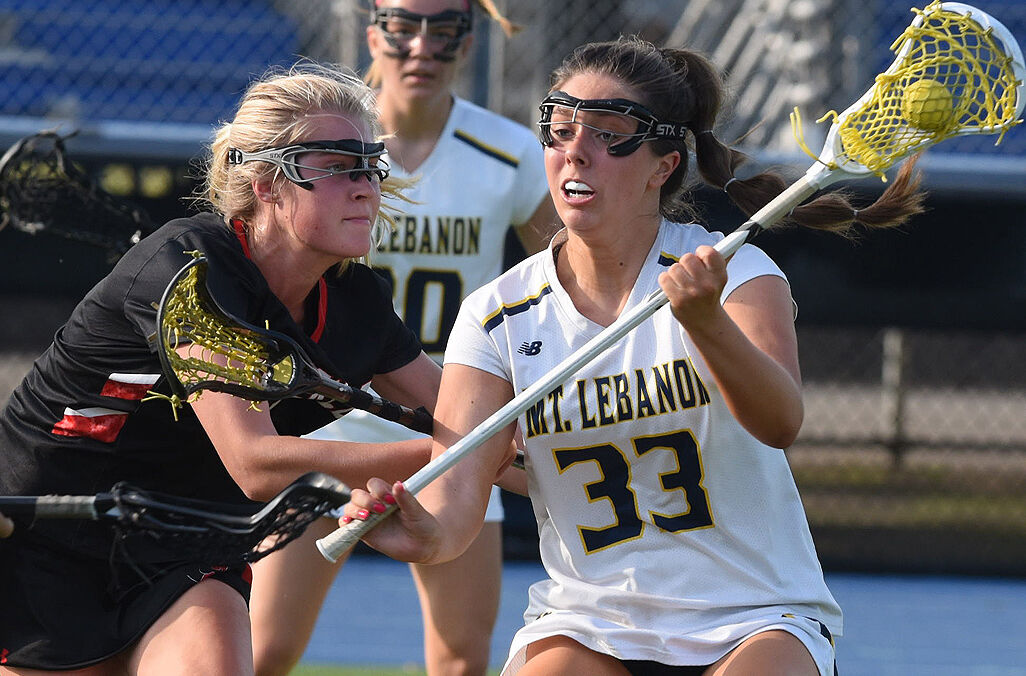 Mt. Lebanon's Reagan Murdoch charges into the teeth of the Sewickley Academy defense and scores a goal during a WPIAL semifinal playoff game.

Mt. Lebanon’s Addie Murdoch holds off a Sewickley Academy defender as she makes her move to the goal.

Mt. Lebanon's Reagan Murdoch charges into the teeth of the Sewickley Academy defense and scores a goal during a WPIAL semifinal playoff game.

The Mt. Lebanon girls lacrosse team jumped to a five-goal lead and held on for a 13-10 semifinal playoff victory over Sewickley Academy May 24 at Canonsburg Memorial Stadium.

With the win, the Blue Devils advanced to the WPIAL Class AAA championship game May 26 at Robert Morris University.

“It just gives you a cushion that we needed at the end especially and just let’s everybody relax a little bit especially in big games like this,” Kattan said. “If you start out slow, sometimes it gets into your head. So to get out fast really helps.”

Murdoch and her sister, Reagan, registered two critical goals for the Blue Devils as Sewickley closed to within two goals twice in the game’s final five minutes.

Addie’s tally preserved a 12-9 advantage with 5:04 to play. Reagan, who finished with a hat trick, scored the Blue Devils’ final goal with 3:21 remaining.

“I am not going lie. It got nerve-wrecking,” Kattan said of the game’s final minutes. “We have never been up late in a close game against a really, really good team like Sewickley, so I was a little nervous. But they came through with flying colors. That is all that counts.”

Kattan added that he was “extremely pleased” with how his team responded in the second half, particularly when the Panthers dominated much of the action.

Elsa Gordon and Emma DeSantis rallied Sewickley Academy. They each scored back-to-back goals during a four-goal run that pulled the Panthers within 11-9 with 5:38 to play.

“(Sewickley) got to every ground ball,” Kattan said. “They are a great team.

“Even though we jumped off to a great lead I knew that it wasn’t going to be a 10-goal game,” he added. “I knew they were coming back, that they weren’t giving up. They kept going after it and getting every ground ball that we weren’t and really played a great second half. They put the first half behind them and went for it.”

“Balance is one of our biggest things,” Kattan said. “You can try and do things against Reagan or Addie but we have enough players and are deep enough that you can’t just shut out one or two girls. They keep coming at you.”

“Addie has been tremendous,” Kattan said. She always comes up with a big save when you need it. She has that knack for it.”

Sydney Saba, Kate Lamendola, Allie Hyland and Brooke Loughran have a propensity for shutting down the opposition.

“Defensively they have been great all year,” Kattan said. “Everyone does a little something different. They all help out everywhere. It’s been great.”

Upper St. Clair dropped a 12-7 decision to Shady Side Academy in the other Class AAA semifinal girls game played at North Allegheny.

The Panthers (12-3), however, are still alive for a PIAA playoff berth. USC will challenge Sewickley Academy for the final state postseason berth in the consolation match played May 26 at Robert Morris University.