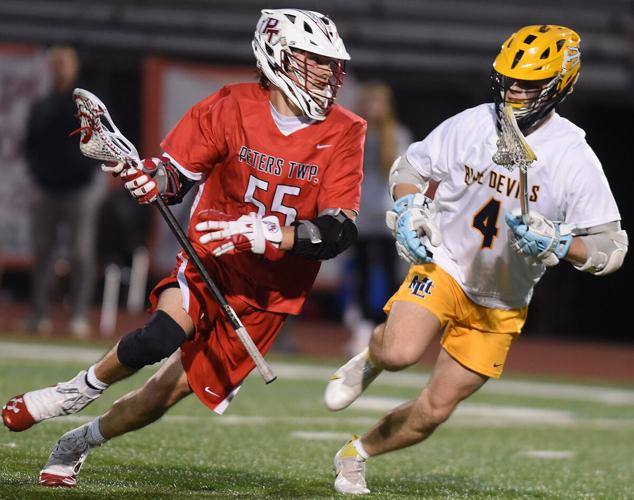 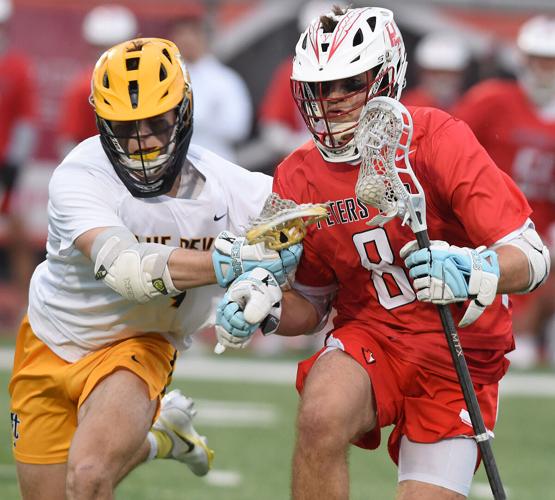 Cullen Gillespie (8) fends off a check by a Mt. Lebanon defender as he carries the ball into the Peters Township offensive zone during WPIAL Class 3A semifinal lacrosse action. In overtime, Lebo defeated the Indians, 10-9. 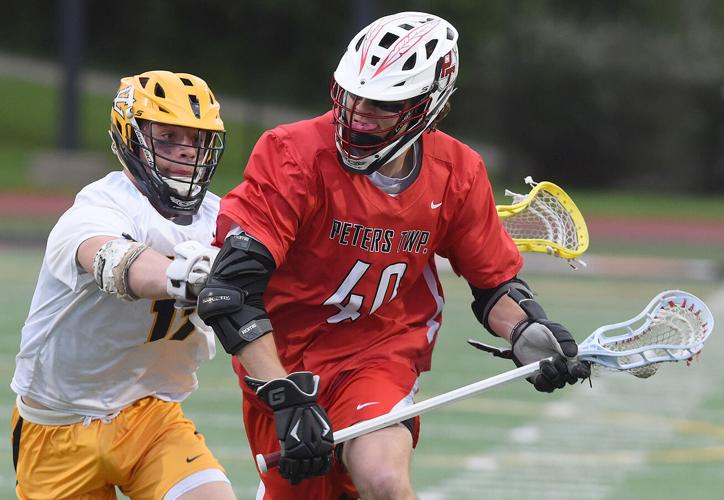 Keyan Moser (40) shakes off a check by a Mt. Lebanon defender during WPIAL Class 3A lacrosse semifinal action. Moser scored a goal and provided two assists but Peters Township dropped a 10-9 decision in overtime to the Blue Devils.

Cullen Gillespie (8) fends off a check by a Mt. Lebanon defender as he carries the ball into the Peters Township offensive zone during WPIAL Class 3A semifinal lacrosse action. In overtime, Lebo defeated the Indians, 10-9.

Keyan Moser (40) shakes off a check by a Mt. Lebanon defender during WPIAL Class 3A lacrosse semifinal action. Moser scored a goal and provided two assists but Peters Township dropped a 10-9 decision in overtime to the Blue Devils.

John Porretta drove four daggers into the heart of the Peters Township boys lacrosse team. The final one proved fatal as Porretta killed the dreams of a WPIAL championship for the Indians.

With his overtime goal, Porretta led Mt. Lebanon to victory, 10-9, at Bethel Park stadium. The Blue Devils advanced to the Class 3A finals on May 25 at Robert Morris University while the Indians wrapped up a 14-3 season.

In addition to two losses to Lebo, the Indians dropped a regular-season match to Mars, which vied for its sixth straight Class 2A title.

“Obviously, our goal is always a WPIAL championship but it’s hard to complain after a year we had,” said PT head coach Mike Kaplan. “We lost to good teams. So we can’t complain too much.”

The Indians could curse their inability to cling to a three-goal advantage they had constructed by the fourth quarter. Riley Grudi, Ryan Shannon and Chase Cogley provided the edge before Lebo exploded for three tallies in a 1:49 span to knot the contest, 8-8, with 6:04 remaining.

“Lacrosse is a game of runs,” explained Kaplan. “You get hot at the right moment and score a couple of goals. Unfortunately for us, those goals came at the end of the game.”

Liam McCall struck with 2:57 left in regulation to lift the Indians back into the lead, 9-8. McCall finished with three assists to go along with his two tallies.

“(McCall) plays bigger than he is. He puts his body on the line for us,” Kaplan said. “He did that for us there and throughout his career.”

With the season on the line for Lebo and with 28.9 seconds left in regulation, Bryce Pavlik scored the equalizer. Colton Cramer assisted.

“I have a lot of faith in these guys and their ability to handle adversity,” said Blue Devils coach Mike Ermer. “I had a lot of confidence. These guys are battle tested. They showed a lot of heart.”

Elmer wasn’t certain victory was in hand once the game shifted in Lebo’s favor. Though they attempted to control the faceoff, Grudi gained possession and put a shot on goal that Sam Meyers turned back. Shortly after, Porretta punched in the game-winner.

“Momentum is a fickle mistress,” Ermer said. “Especially in lacrosse with a faceoff, that’s where momentum starts.

We rolled out some guys for the faceoff and No. 4 got it. He’s an excellent player. He managed to get it but Sam made a big save and things started going our way.”

Things went Lebo’s way at the start as Miles Halter and Porretta provided a 2-0 advantage seven minutes into the game.

McCall and Eliot Schatz tied the game before Matt Wertz gave the Blue Devils a 3-2 edge at the end of the first frame.

Shannon and McCall scored for the Indians and Porretta for the Blue Devils as the teams were tied, 4-4, at the half.

Kenyan Moser and Porretta traded goals before PT embarked on its three-goal run, taking the lead, 8-5, with 11:38 to play in regulation.

“Coming into overtime with that kind of momentum, it was definitely difficult. It was a difficult shift for us,” Kaplan said of Lebo’s rally.

“With that said, we had a great opportunity at the end but their goalie made a great save. It goes the other way but they put the ball in to end the game.”

It was a rough ending for PT goalie Zach Courie and the defense in front of him.

“The team as a whole had a great year. It’s unfortunate to see it go down in overtime.”

Lebo beats P-RLebo defeated Pine-Richland, 18-7, to reach the championship match while SSA advanced with a 13-5 victory against Upper St. Clair.