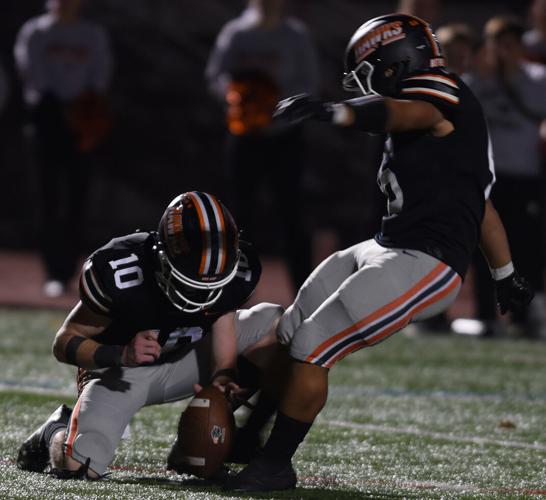 After Jack Bruckner sets the football, Kaden Wetzel boots a 22-yard field goal to seal a 19-17 victory for Bethel Park against North Hills in the quartefinals of the WPIAL Class 5A football playoffs. 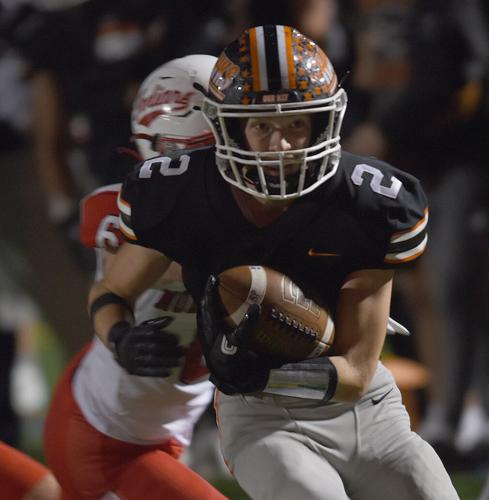 Jason Nuttridge heads for the end zone after making a reception during Bethel Park’s 19-17 win against North Hills. In addition to his play on offense, Nuttridge had an interception on defense that sealed the victory with 1:27 to play in the game.

After Jack Bruckner sets the football, Kaden Wetzel boots a 22-yard field goal to seal a 19-17 victory for Bethel Park against North Hills in the quartefinals of the WPIAL Class 5A football playoffs.

Jason Nuttridge heads for the end zone after making a reception during Bethel Park’s 19-17 win against North Hills. In addition to his play on offense, Nuttridge had an interception on defense that sealed the victory with 1:27 to play in the game.

A 5-10, 180-pound junior, Wetzel kicked the game-winning field goal in Bethel Park’s 19-17 victory over North Hills. His 22-yard kick from the right hash mark with 6:38 to play catapulted the Black Hawks into the WPIAL Class 5A semifinals.

Great players also plug through adversity and maintain their confidence when others may doubt them.

Facing a fourth-and-1 situation, DeLallo called for the field goal unit. Someone on the sideline shouted ‘right hash’ as a reminder to DeLallo of Wentzel’s challenges from that angle in practice.

“The right hash has been his bug-a-boo, but I said this is his chance right here,” said DeLallo. “Here’s a guy who waited for his opportunity and stepped up, banged that thing through and performed for his teammates.

“We knew Kaden was going to have to step up and make a big kick for us and this one was huge. We needed it. We don’t win without that kid.”

Upper St. Clair doesn’t upset Gateway, 24-21, without Henderson. In the quarterfinal triumph that sent the Panthers into a semifinal showdown with BP, Henderson connected on three field goals that measured 34, 47 and 25 yards.

“Bennett has made a number of big kicks in big games,” said USC skipper Mike Junko. “He is a weapon to put points on the board any time that we get inside the 30.”

A 5-10, 165-pound junior, Henderson has kicked eight field goals for the Panthers. His 43 extra points make him the team’s second-leading scorer with 84 points.

“Bennett works very hard at his craft,” said Junko. “His greatest attribute as a kicker is his accuracy.”

A couple of other unsung heroes for the Panthers as well as the Black Hawks were on the mark in their quarterfinal triumphs.

Sophomore quarterback Julian Dahlem sparked USC. Inserted into the game in the fourth quarter, he guided the Panthers on an 11-play, 65-yard scoring drive that was highlighted by Aidan Besselman’s 26-yard TD reception. The fourth-and-11 grab with 2:22 remaining capped the come-from-behind victory for the Panthers.

USC had forged a 10-0 lead on Henderson’s 34-yard field goal and Jamaal Brown’s 80-yard touchdown run but the Gators took the lead by halftime, 14-10, on two scoring strikes by Bradley Birch.

On a blocked field goal attempt, Gateway recovered and Anex Jordan took it to the house for a touchdown and a 21-13 Gator lead midway through the third quarter.

“What an emotional roller coaster of a game,” Junko said. “The kids played so hard. Showed a lot of resilience. I am so proud of them.”

Besselman had four receptions for 63 yards and the game-wining score. In 11 games, he has 37 catches for 743 yards and 10 scores.

Cameron Phillips had one catch for 63 yards against the Gators. He is second behind Cody Marn in receiving. Man has 14 grabs for 242 yards and three TDs.

Van Hellman led the defense, which limited Gateway to 34 yards rushing. He finished with 8.5 tackles. Nathaniel Stohl and Tyson Swigart followed with five and 4.5 tackles respectively.

Meanwhile, Jason Nuttridge provided late-game heroics for BP against North Hills. The senior intercepted the Indians’ last gasp for victory on a fourth-and-long play with 1:27 left to seal the victory for the Hawks.

“Jason has a lot of experience. He has a lot of high pressure experience with those back-to-back state championships with the baseball team and that pays off in a game like (North Hills). It was pressure.”

Nuttridge is under added stress because he is filling in for his teammate. Ryan Petras, who also played on BP’s state winning baseball club, broke his collar bone in the last regular-season game, a 27-21 victory against Peters Township that insured the conference championship. Petras had 1,156 combined yards rushing and receiving as well as 17 touchdowns before he was injured.

“One thing we have is depth,” DeLallo explained.

He noted how BP plugged Gavin Moul and Blake Striegel into the H-back position while leading rusher Austin Caye nursed an injury throughout the regular season. Now Nuttridge is not only playing in the secondary, he is a target for Tanner Pfeuffer on offense.

“We’ve had a couple guys step up and Jason has made some great catches. We know he’s capable.

“There’s just only one football,” DeLallo continued. “So many guys to spread it around to so he doesn’t always get a ton of opportunities. But it’s really fulfilling to see Jason shine. He has to continue to do that for us to keep winning.”

BP won against North Hills also because Pfeuffer threw for 194 yards and two touchdowns, one to Moul for 25 yards and the other to Nuttridge for 17 yards. Additionally, Moul’s tackle in the end zone netted the Hawks a safety and a 16-7 lead with 10:15 left in the second quarter.

The WPIAL Class 5A and 6A football championship games will be played Nov. 19 at Norwin High School stadium.

Winners will enter the PIAA tournament as a quarterfinalist. Games will be played Nov. 25 and 26 at neutral sites. The semifinals are set for the following week.

The state championship games will be played at 7 p.m. at Cumberland Valley High School. The 5A final is set for Dec. 9 and the 6A clash will be played Dec. 10.

The South Hills is assured of at least one team in the WPIAL 5A final as the winner between Bethel Park (10-1) and Upper St. Clair (9-2) advanced to the championship contest.

Mt. Lebanon hosted Central Catholic in one of the 6A semifinal games played Nov. 11.

Results of both semifinal games occurred too late to be published in the Nov. 13 edition of The Almanac.