Skip to main content
You have permission to edit this article.
Edit
Welcome, Guest
News
Sports
Life & Culture
Events Calendar
Lottery Results
Fish Fry Map
Weather
Sponsored Content
Classifieds
e-Edition
South Hills Living
Get Our Newsletter
Get the Almanac
Advertise With Us
Submit Content to The Almanac
Contact Us
About Us
1 of 4 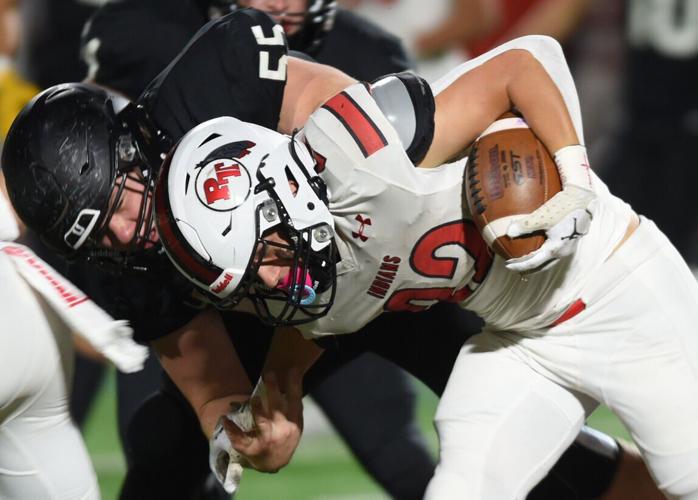 Mark Banbury (55) puts the hit on Richie Woods (22) during Upper St. Clair’s 17-10 victory against Peters Township. Banbury along with Zach Ehasz and Nate Stohl anchor the Panther defensive line and will play a pivotal role as USC hosts Bethel Park at 7 p.m. Oct. 7 in a key Allegheny Six Conference clash. 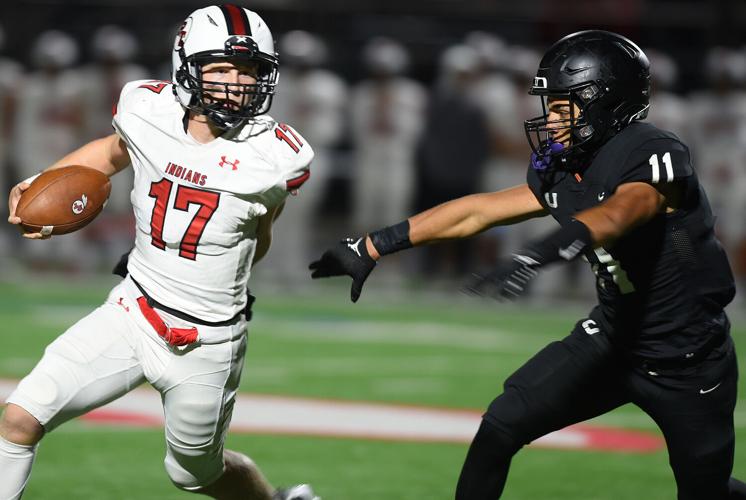 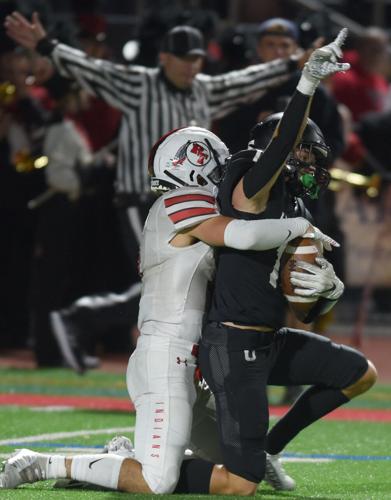 Jacob Hufnagel (10) signifies his Panthers of Upper St. Clair are No. 1 after making an interception during a 17-10 victory against Peters Township. Both teams came into the conference clash undefeated at 4-0. 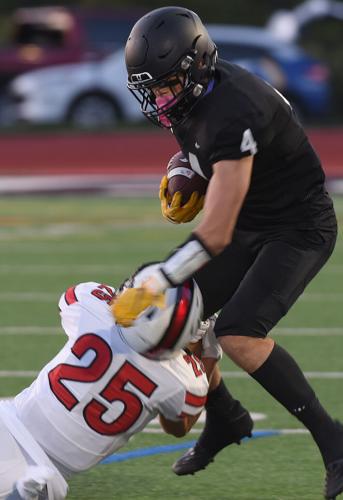 Mark Banbury (55) puts the hit on Richie Woods (22) during Upper St. Clair’s 17-10 victory against Peters Township. Banbury along with Zach Ehasz and Nate Stohl anchor the Panther defensive line and will play a pivotal role as USC hosts Bethel Park at 7 p.m. Oct. 7 in a key Allegheny Six Conference clash.

Jacob Hufnagel (10) signifies his Panthers of Upper St. Clair are No. 1 after making an interception during a 17-10 victory against Peters Township. Both teams came into the conference clash undefeated at 4-0.

UPPER ST. CLAIR – Former Ohio State coach Urban Meyer once referred to a defensive struggle with Michigan State as “two sledgehammers hitting into one another.”

Though this wasn’t a matchup between two Big Ten heavyweights, the Peters Township-Upper St. Clair clash indeed carried some percussive ramifications. Both entered the game with spotless records and a win would put one squad in the catbird seat in the Class 5A Allegheny Six Conference.

Though both squads were known for their potent offenses, defense was the name of the game. USC’s defense was a touch more dominant as the Panthers secured a 17-10 win over the Indians.

PT’s offense was held to 139 total yards and did not find the end zone until 35 seconds remained in the game.

Quarterback Chris Cibrone was sacked twice and threw an interception. He was injured before halftime, according to Peters Township coach TJ Plack, and did not return to the ballgame.

“His mobility just wasn’t there,” Plack noted. “We needed a more of a running quarterback so we went with Nolan (DiLucia) the rest of the way.”

USC (2-0, 5-0) scored the game’s first touchdown with 8:35 left in the third quarter when Jamaal Brown barged in from five yards. Brown’s 30-yard run off left tackle set up the score that gave the hosts a 10-3 lead.

Ethan Wertman appeared to have given the sluggish Indians a jolt when he recovered a muffed USC punt on the Panthers’ 31. But the PT offense was only able to move to the 28, where on 4th-and-7 Joe Bedillion’s 45-yard field goal attempt was partially blocked, leaving the Panthers’ advantage at seven points.

The Panthers took command early in the fourth when Ethan Hellmann lofted a rainbow of a throw to Aidan Besselman for a 70-yard TD. The Indians attempted to get pressure on the passer with a middle blitz. But it was picked up by the Panthers offensive line, which gave Hellman time to strike and give USC a 17-3 advantage.

Wertmann again recovered a fumbled USC punt. This one was on the Panthers’ 27. But again the USC defense held firm when Nate Stohl sacked DiLucia on fourth down from the 25.

Besselman also got into the act when he intercepted a DiLucia pass on the Upper St. Clair 33.

But USC was not ready to wrap it up just yet as another fumble recovered by the Indians put them near the Panthers’ 25.

DiLucia finally pushed the Indians across the goal line with a three-yard scamper up the middle, slicing the Upper St. Clair advantage to 17-10 with 35 seconds remaining. Besselman put an end to the game when he recovered the onside kick.

“They beat us up front,” Plack said. “We just could not run the ball at all. It seemed as if we’d have a play blocked up and we’d get only a yard out of it.”

“We know for us to be the best team in 5A we need to have the best defense, and I think we’ve shown that so far,” Junko added. “Even though Peters is known for throwing the ball, we knew we had to stop the run first and foremost. I say we did that tonight.”

Peters Township broke the scoreless seal late in the first period with a 22-yard Bedillion field goal. The points were set up by an Indians defense that forced a punt from inside the Upper St. Clair 10 that was fielded by Brendan McCullough near midfield and returned it to the USC 23. The Indians were able to move to the Upper St. Clair 5, but was stopped there, bringing on Bedillion, who gave the visitors a 3-0 lead with 2:10 left in the first quarter.

Upper St. Clair responded with a scoring drive that netted three points by kicker Bennett Henderson, who made his field goal from 25 yardst with 6:55 left in the second quarter.

Peters Township appeared to have handed momentum to the Panthers towards the end of the half when they went for it on 4th-and-5 on their own 48 and failed to convert when Cibrone’s pass fell incomplete. But the Indians’ defense squashed the threat when they forced a three-and-out on the Panthers’ ensuing possession.

Cibrone attempted to strike with a deep ball on the Indians next drive, but it was intercepted by Jacob Hufnagel on the Panthers 20 to end the half.