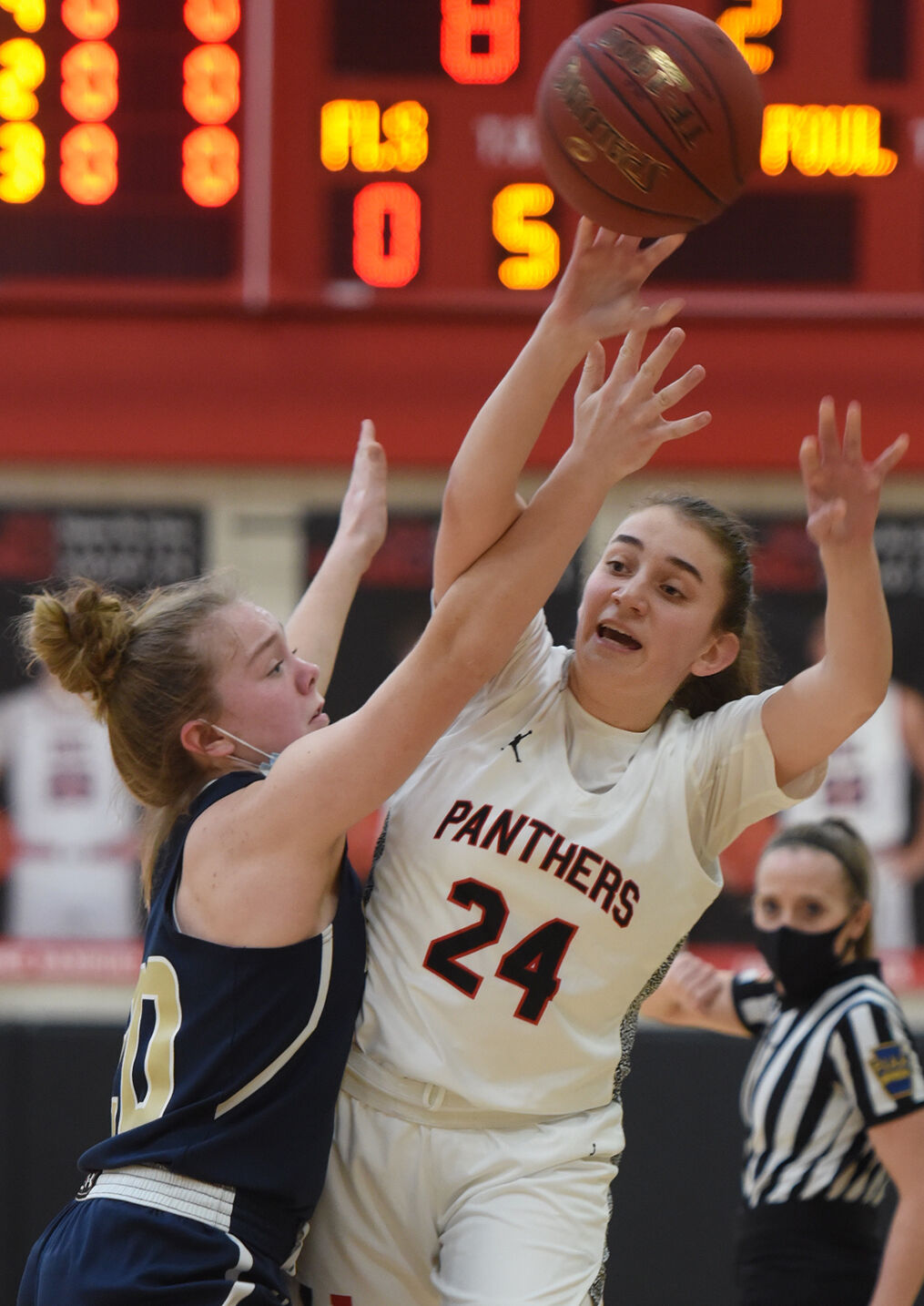 Upper St. Clair's Ava Keating fights off Norwin's Mara Polczynskito get off a pass during a WPIAL girls Class 6A semifinal game. 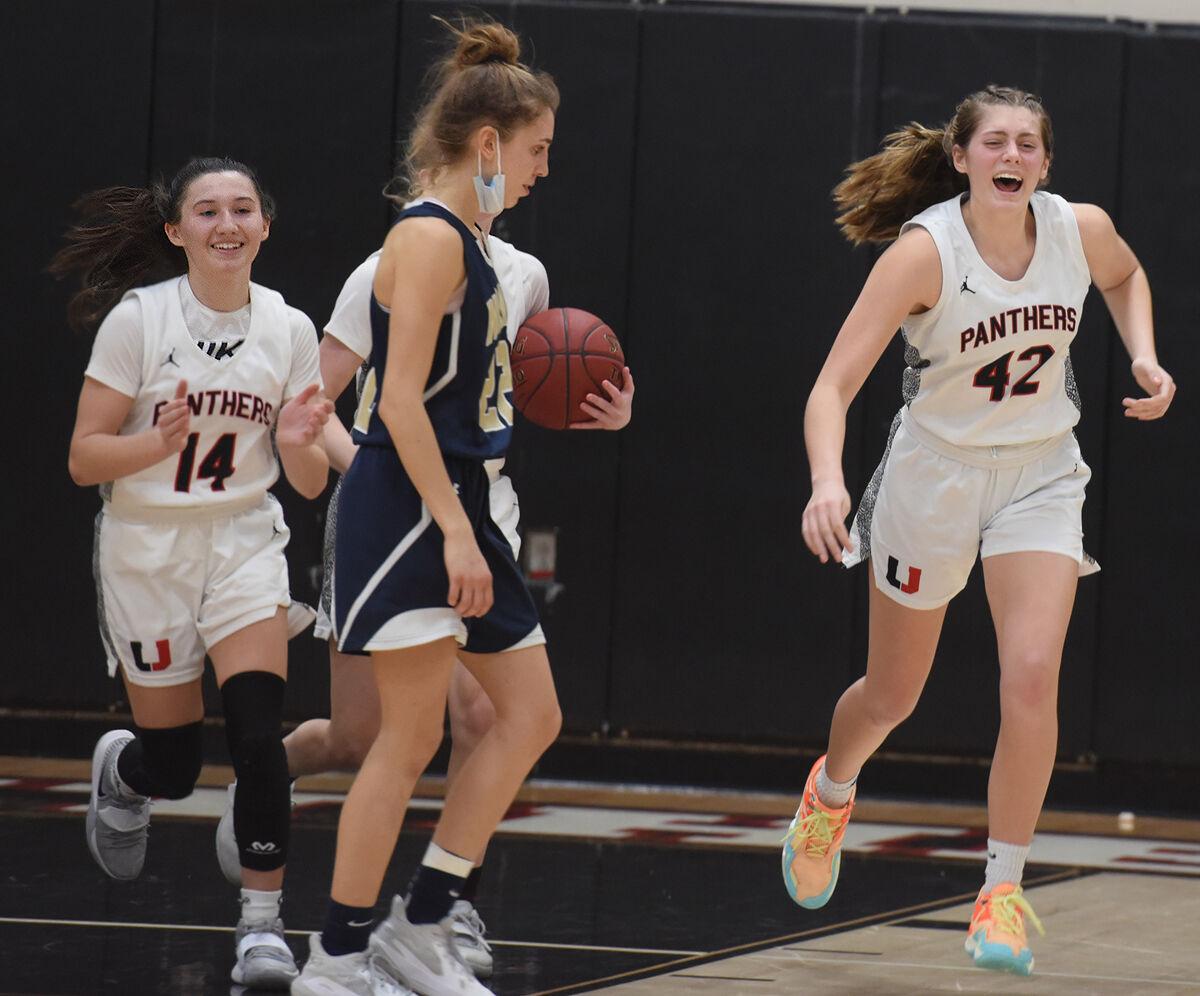 Upper St. Clair's Ava Keating fights off Norwin's Mara Polczynskito get off a pass during a WPIAL girls Class 6A semifinal game.

Ava Keating was not.

When play resumed, she responded with a 3-point field goal that sparked the Panthers on an 11-6 run and an eventual 33-31 victory over the Knights.

The win advanced USC to the WPIAL Class 6A championship game played March 13 against North Allegheny (23-1). The Tigers, who have won the past two titles, defeated Mt. Lebanon 49-36 in the other semifinal match-up.

Keating, a 5-8 sophomore, missed all but one game of the regular season because of a shoulder injury. She and Mia Brown, who injured her knee at the start of the year, were starters on last year’s 14-9 squad that lost to NA in last year’s semifinals, 39-27.

“Ava gave us a huge three,” Serio said. “For anyone to expect her to be Ava, well she hasn’t played in 11 months and she just got back. Without her and Mia, the girls really had to step up all year.”

In the fourth quarter, guards Sam and Alex Prunzik stepped up in surprising ways, grabbing offensive rebounds and controlling the tempo until the Panthers found Kate Robbins inside for back-to-back buckets. Abby John also had a basket.

Sam Prunzik provided the game-winner to give USC a 33-30 cushion.

However, in those remaining 42 seconds, USC’s insecurities surfaced again. Down the stretch the Panthers missed the front end of two potential bonus free throws. With .3 seconds left, Norwin made a free throw, but could not convert after intentionally missing the second shot.

“One of my concerns was our inexperience. We don’t really have a go-to player, especially on the perimeter,” Serio said. “I thought the first three quarters we played afraid to win. Usually, it’s afraid to lose. We did just enough to win. In the fourth quarter, we played to win instead of trying not to lose.”

The Knights contained Robbins with a smothering defense. The sophomore center, who was averaging 15 points per game, finished with eight.

Paige Dellicarri, another sophomore, scored all nine of her points on three treys in the first half as USC opened up a 20-15 lead.

Sam Prunzik, also a sophomore, had a 3-pointer and finished with five points.

“Hats off to Norwin,” Serio said. “Their defense was fabulous. The change-ups the made from zone to man really confused us at times. They played great.”

With 4.5 seconds left in overtime, Mt. Lebanon’s Morgan Palmer drained a free throw to seal a 59-58 victory that ended Bethel Park’s season at 15-4 and advance the Blue Devils to the semifinals in the WPIAL Class 6A tournament.

Mt. Lebanon’s Palmer finished with 16 points while Ashleigh Connor tossed in a team-high 28.

Olivia Westphal was the big gun for the Hawks. The Duquesne recruit exploded for 39 points. She scored BP’s final 18 points. Westphal buried six 3-pointers in the game, including one that tied the game at 49 and forced overtime.

BP, which has four players foul out of the game, opened up a 24-12 second-quarter lead on a pair of Westphal 3-pointers. However, the Blue Devils used a 15-4 run to close the gap to 28-27 by halftime.

The Panthers scored a 63-39 win against Pine-Richland (7-11) to advance to the final four.

Kate Robbins tossed in 16 points and cleaned the glass 10 times to complete a double-double.

Paige Dellicarri buried four 3-pointers and finished with 16 points, 12 coming in the second half.