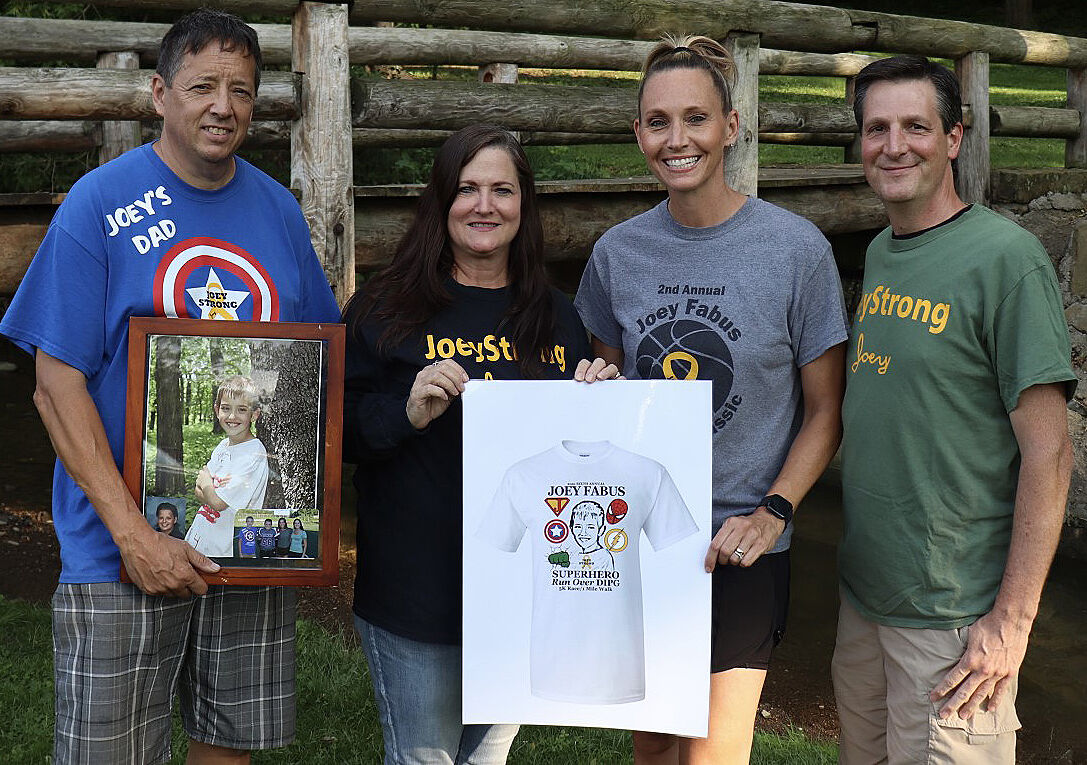 From left, Dave and Cindy Fabus, posing with race directors Jonna Burke and Jeff Smith, unveil the prototype for the T-shirts for the fifth annual Joey Fabus Superhero Run Over DIPG. The 5K race and 1-mile fun run are set for 9 a.m. Sept. 12.

Jenna Lang of Bethel Park was the top female finishers at the Joey Fabus Superhero Run Over DIPG last held in 2019. 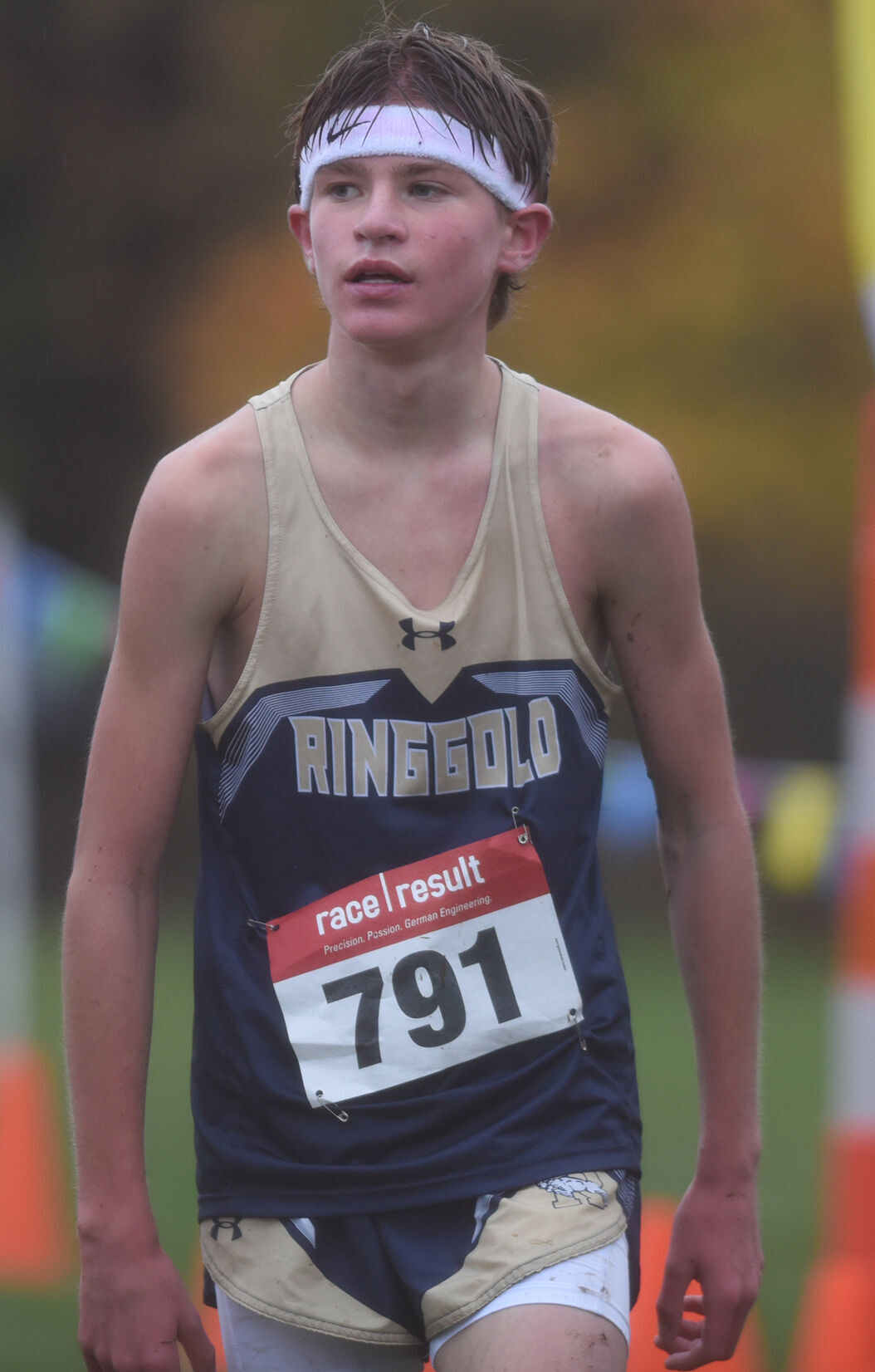 Ryan Pajak from Eighty Four was the top male runner in the 2019 Joey Fabus Superhero Run Over DIPG.

From left, Dave and Cindy Fabus, posing with race directors Jonna Burke and Jeff Smith, unveil the prototype for the T-shirts for the fifth annual Joey Fabus Superhero Run Over DIPG. The 5K race and 1-mile fun run are set for 9 a.m. Sept. 12.

Jenna Lang of Bethel Park was the top female finishers at the Joey Fabus Superhero Run Over DIPG last held in 2019.

Ryan Pajak from Eighty Four was the top male runner in the 2019 Joey Fabus Superhero Run Over DIPG.

Logan Burke, 16, runs to stay in shape for soccer and basketball. She races for philanthropic reasons.

A rising sophomore at Bethel Park High School, Burke will be among the participants in the Joey Fabus Superhero Run Over DIPG, which is returning after a one-year hiatus imposed by the coronavirus pandemic. The 5K race and 1-mile fun run is scheduled to start at 9 a.m. Sept. 12.

“I’ll run as long as I can because it’s definitely for a very good and important cause,” said Burke.

“It was a horrible case,” said Burke. “Obviously, it breaks your heart how cancer can take a life away that quickly.”

Though he attended George Washington and she went to William Penn, Fabus and Burke were in the same grades for elementary school. They knew each other’s friends.

Now, Burke runs in Fabus’ memory. She has competed in the event every year since its inception in 2015.

“The race is a hard course but it’s definitely good motivation,” said Burke. “When you are out there running, you can’t help but think about what the kids with childhood cancer went through. So running these three miles is not nearly as hard as what they have gone through.”

The Fabus family has survived much.

Married for 28 years, Dave and Cindy Fabus raised children, Nick, Josh, Clarissa and Olivia in addition to Joey. The couple also had another daughter, Hannah, who died from complications arising from a kidney condition at just 15 months old.

In 2018, Dave Fabus underwent heart transplant surgery. So in addition to crusading for DIPG, he expends energy on the Center for Organ Recovery and Education and organ donations.

“This helps keep us alive,” he said.

Dave Fabus said the foundation does not just help kids with brain cancer. It channels assistance to families for many other childhood cancers.

“The hope, particularly with the race, is to get to a cure but when you are going through raising a child and dealing with cancer, there are so many other factors involved. People have to live and pay their bills. If we can make it easier for them, then that would be great,” he said.

Dave Fabus said he is thankful the race is being held this year.

“We really missed it last year,” he said. “It’s really nice we are able to get it back up and running. I’m very excited and glad it’s back because it helps us raise so many funds.

Bethel Park girls varsity basketball coach Jonna Burke co-directs the race with Jeff Smith. She handles the volunteers and logistics, while Smith handles the technical side of the event, including registrations and communicating with race participants.

“The foundation relies on the race. It’s the biggest fundraiser we do. So it is with a sigh of relief that we can have this,” said Burke. “The thing that this pandemic has taught us to take nothing for granted. So the fact that we are having an in-person event this year is a big deal.”

The race committee is offering a virtual option. Fees are $25 for the 5K run/walk and $15 for the one-mile walk. July 31 is the registration deadline for the virtual race.

T-shirts are guaranteed for in-person participants only if registered by Sept. 1.

“We decided to offer the virtual race for those that did not want to participate for whatever reason. It was too far away, they would be away that day or the just did not feel comfortable running in crowds,” Burke said.

Historically the race has attracted between 400 and 500 runners but Burke said she anticipates an uptick in registrations because people are anxious to return to normal after a year of isolation from the pandemic.

“It seems like everything is bigger and better than ever,” she said. Maybe we are just not used to seeing the crowds but it seems to be following a trend.”

Participants are encouraged to dress up in their favorite superhero costume to celebrate Joey’s passion for caped crusaders. He particularly enjoyed Captain America.

“That has always been a theme,” Burke said. “Ultimately, Joey is a super hero to every one. Bottom line is all of these kids with cancer, and Joey, are the super heroes.”

Dave Fabus appreciates the heroic efforts of all the runners and walkers. As they negotiate the challenging course along roads near the high school, he positions himself at the starting and finishing lines of the race.

“It’s emotional seeing the runners come through,” he said. “Obviously it’s tough but it’s worthwhile hearing how people remember Joey and how they come out because they want to find a cure for cancer. It makes you really appreciative. All around this is an amazing thing.”

For more details about the race and DIPG, visit runsignup.com.