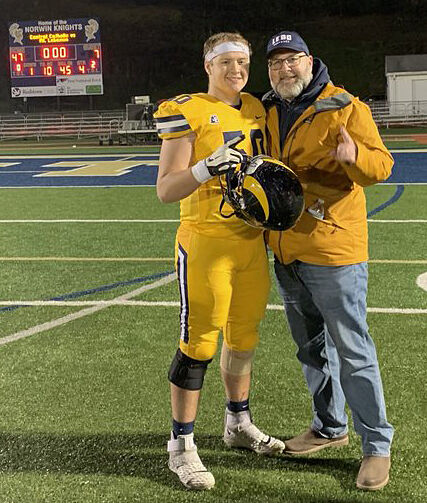 James Kline and his dad, Steve, each won WPIAL championships as members of the Mt. Lebanon football team. James is a center on this year’s title team that also competed for a PIAA crown in Hershey. Steve won his title in 1981 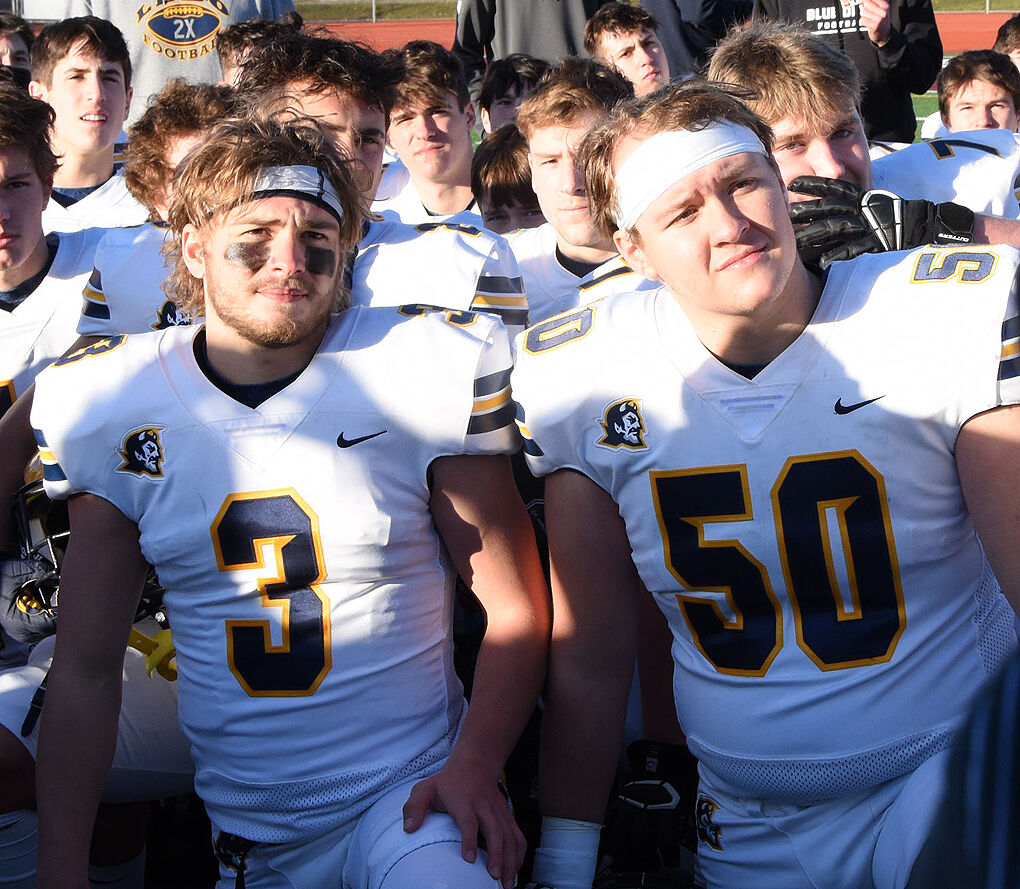 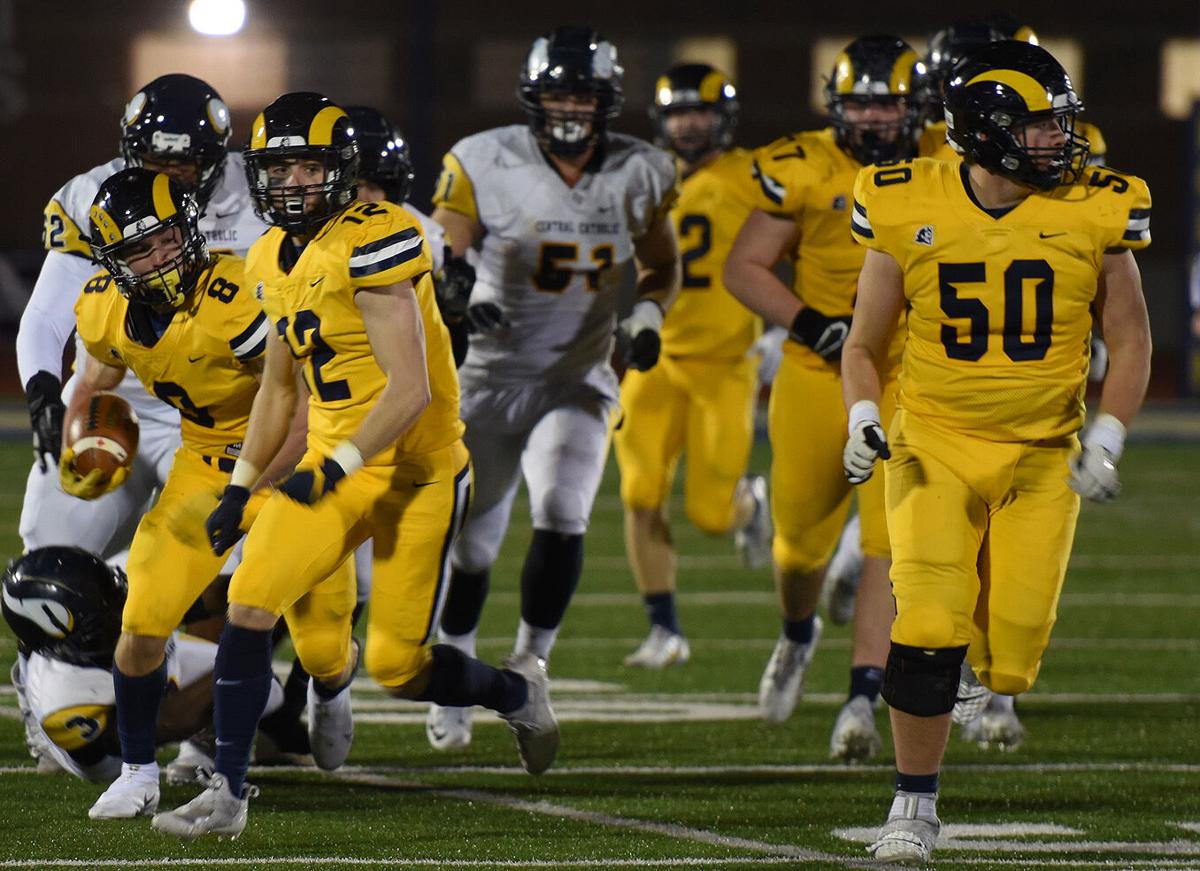 James Kline (50) and Brendan Anderson (12) lead a host of blockers clearing a path downfield and into the end zone for Eli Heidenreich (8) during the WPIAL Class 6A championship game.

James Kline and his dad, Steve, each won WPIAL championships as members of the Mt. Lebanon football team. James is a center on this year’s title team that also competed for a PIAA crown in Hershey. Steve won his title in 1981

James Kline (50) and Brendan Anderson (12) lead a host of blockers clearing a path downfield and into the end zone for Eli Heidenreich (8) during the WPIAL Class 6A championship game.

James Kline may not be the center of attention but he is the hub of the Mt. Lebanon football team’s offense. A 6-2, 255-pound senior, Kline snaps the football.

“As a center, I need to make sure I am fully prepared. I need to know what all the defenses look like so we won’t be surprised by what the other teams are doing,” he said.

“All of us on the line have got to make sure we follow our roles. We can’t be out freelancing. As long as we are technically sound and know our assignments then we are good to go.”

Kline and his teammates on the line have performed their tasks so well this season that the Blue Devils landed in the PIAA finals for the first time in school history after a 49-28 victory over State College Dec. 4 at Altoona’s Mansion Park Stadium.

The Blue Devils will travel to Hershey and put their undefeated record (14-0) on the line when they faced St. Joseph’s Prep (12-2) in the Class 6A state championship game Dec. 11.

It’s also thrilling for Kline to walk in his father’s footsteps.

Forty years ago, Steve Kline won a WPIAL championship. In 1981, however, there were no state playoffs so Lebo’s season ended at 13-0.

This fall, Lebo won its first WPIAL title in 21 years when the Blue Devils defeated Central Catholic 47-7 in the Class 6A final played Nov. 20 at Norwin Stadium.

With the victory over the State College, though, Kline had the opportunity to do his dad one better.

“It’s awesome to walk off the field and see him there and just knowing and feeling like I am filling his shoes,” Kline said after the State College win.

“It’s definitely an exciting prospect,” he added. “Winning two championships has been the plan. I will be able to hopefully look forward to family dinner and slapping down a big, ole ring on the table and saying ‘beat that dad.’”

Playing football at Mt. Lebanon has suited Kline since the sixth grade. As a junior, he earned a starting slot on the line, filling a void caused by an injury. This season, Kline earned Quad County All-Conference honorable mention status.

His play at center has enabled the Blue Devils to mount an offensive attack that averages 38.9 points per game.

Kline is one of Lebo’s front five that has blocked for Alex Tecza and protected Joe Daniels. Tecza has accumulated 1,987 yards and 24 touchdowns on 221 carries. Daniels has passed for 1,903 yards and 29 scores.

“It’s been special this year and really amazing to see everyone come together,” Kline said. “Everyone always is believing in each other.

“Our chemistry has played a big part in our success. Most of us have grown up playing together. We’ve been together our entire lives and are all real good friends. We know how to lock arms and play as brothers.”