Ryan Magiske returns a fumble into a touchdown during Peters Township’s semifinal win against Penn-Trafford. The senior safety also rushed for a score in the 28-10 victory. 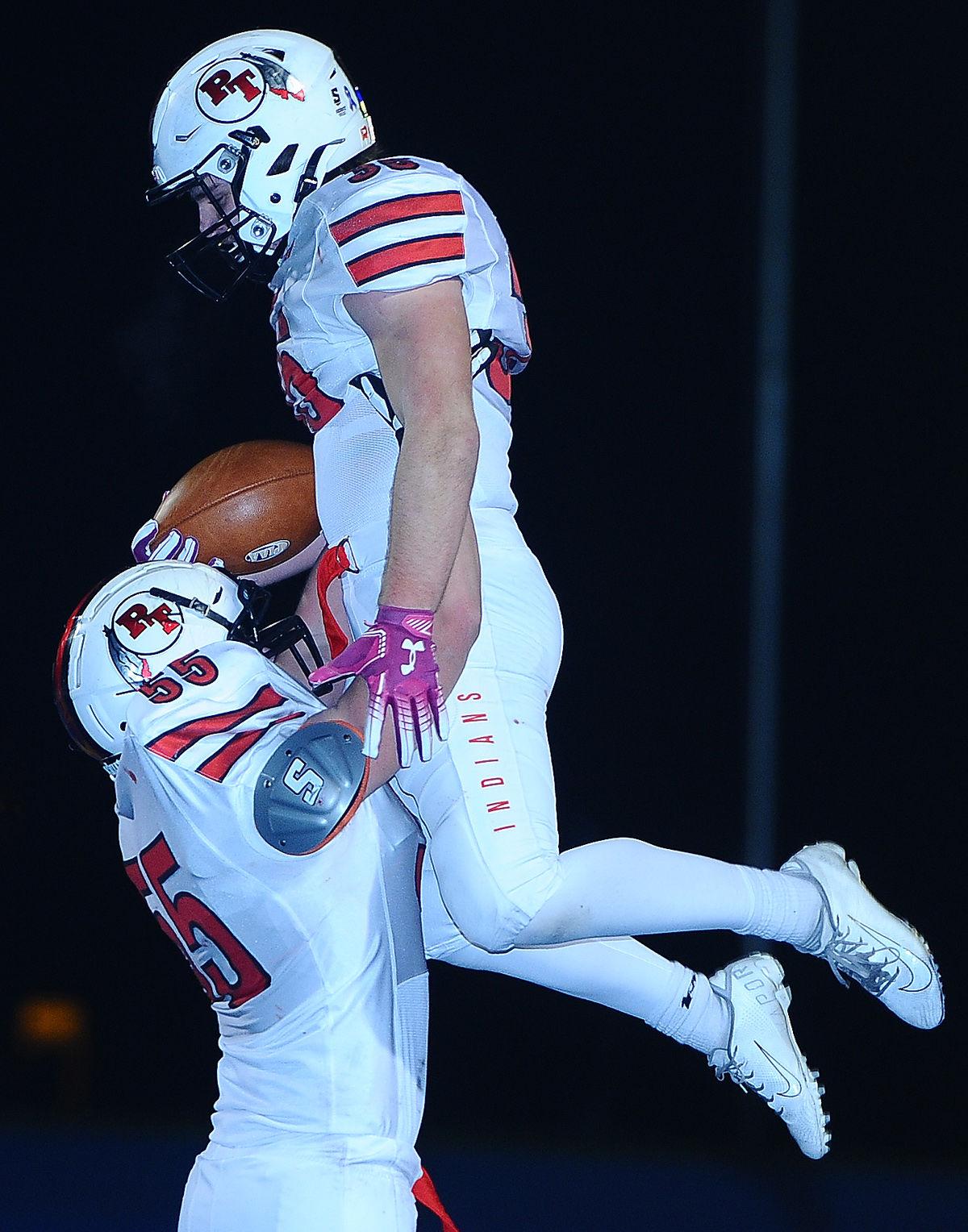 Ethan Spangenberg (55) hoists Ryan Magiske (35) after he returned a Penn-Trafford turnover for a touchdown. Magiske credits linemen like Spangenberg for his success on offense. Magiske ranked among the Top 20 rushers in the WPIAL this fall.

Ryan Magiske returns a fumble into a touchdown during Peters Township’s semifinal win against Penn-Trafford. The senior safety also rushed for a score in the 28-10 victory.

Ethan Spangenberg (55) hoists Ryan Magiske (35) after he returned a Penn-Trafford turnover for a touchdown. Magiske credits linemen like Spangenberg for his success on offense. Magiske ranked among the Top 20 rushers in the WPIAL this fall.

Ryan Magiske may not have grown up in a mill town but the Peters Township tailback certainly possesses a steelworker’s mentality when it comes to playing football.

“By far, Ryan is the toughest high school football player I’ve ever been around,” said head coach T.J. Plack. “He is a throwback football player, to the WPIAL days when steel mills lined the rivers.”

Magiske plows away, making the most of every single carry on offense and each hit on defense.

Magiske has fought his way into the record books.

As he entered the WPIAL Class 5A championship contest against Gateway on Nov. 23 at Norwin, the 5-10, 190-pound running back needed only 96 yards to break the school’s single season and career rushing records. Additionally, he tied the single-season record for touchdowns (19) and eclipsed the career TD mark. He entered the season tied with teammate Josh Casilli, who had 22 TDs heading into the final. So Magiske or Casilli will end up in the top two once the season is complete.

A three-year starter and leading rusher, Magiske has produced back-to-back 1,000-yard rushing seasons as the Indians won consecutive conference championships and have reached the WPIAL finals for the first time in school history.

Magiske entered the game against Gateway with 1,291 yards on 219 carries for 17 scores. He also ranks fifth on the squad with eight receptions for 103 yards (a 15-yard average).

“When Ryan’s running the ball, what immediately sticks out to me, is his vision and balance,” said Plack. “Even when watching film the next day, I am still amazed at how he anticipates and makes some of his cuts. He may not be the faster running back but when he changes directions, he never changes speed and that catches defenders off guard.

Magiske fights as voraciously on a defense that has only allowed 8.5 points per game this season. The defensive back ranks third on the squad with 80 tackles, half of them solo, one interception, five TFL and two fumble recovers, one of which occurred in the semifinal win against Penn-Trafford and was returned for a touchdown.

“On defense, I’m always reading the play, alway in the play,” he continued. “I’m just looking to make a stop. If an opportunity comes though, I’ll take advantage of it.”

“His ability on defense to close ground from his safety position is stunning,” he said. Plack quickly added, “When he gets there, it is surely a tackle.”

Surely Magiske has broken his share of tackles but it has been the O-line that has carved his path to back-to-back, 1,000-yard performances. Magiske credits David Dicio, Dylan Wente, Zach Magnotti, Ethan Spangenberg and Austin McKinnon for their role in the team’s success.

Noting there were question marks at the start of the season because Peters had graduated an experienced line that feature many two- and three-year starters, Magiske had faith in his mates up front.

“I knew we had pretty good linemen and they turned out to be great players. They improved each week. I could not have done what I did without them. Those guys don’t get enough credit for what they do. The coaches, too,” he added. “With them, it’s been a great combination.”

In his own manner, Magiske has contributed to PT’s great passing combination. Logan Pfeuffer passed for 2,165 yards and 25 scores in guiding the Indians to the championship contest while Casilli has hauled in 47 of those aerials for 861 yards and 15 scores.

“The one aspect of (Ryan’s) game that I believe is overlooked, is his pass protection,” Plack said. “He has saved Logan Pfeuffer, on many occasions, with a tremendous ability to pick up a blitzing backer.”

According to Magiske, it’s all part of the game. Since he started playing football at age 6, he has been competing with many of the same players that remain his teammates today.

“We are all friends and it’s all about being a team,” Magiske said. “Being close and trust in each other is the key ingredient as to why we have been successful.

“Determination to play for the team and help each other out has made us so good. It’s not thinking about rushing for 1,000 yards or other personal goals. It’s just trying to get yards or tackles to help my team win games because this is the best group of teammates and great guys that I could ever play with. So it’s always about doing your best and always about giving 100 percent on every play.”

Once his scholastic days are completed, Magiske will devote 100 percent of his efforts to his career goals. While he is considering extending his playing career in college, looking at the Case Western program, Magiske expects to pursue an engineering degree. Penn State, where his older brother, Michael, is nearing completion of his studies, Pitt and Ohio State as well as Duquesne University are interested in his 3.9 GPA.

Magiske accepts the fact that these may be his final playing days.

“I like math and science,” he explained why he is considering engineering. “They’re subject I’m good at and like.”

Magiske has relished being a part of an historic football run at Peters Township. He said beating Penn-Trafford probably has been his best experience because it put the Indians in their first championship game ever.

“There’s no bigger experience than playing in a championship game,” he said, “so it’s hard to explain how it feels but it’s pretty exciting to represent our township and it’s pretty important that we have been able to reshape the program ever since Coach Plack arrived.”

As they prepared for the Gators, the Indians never wavered from Plack’s plan of attack.

“Each week is a new week and the last week doesn’t matter,” Magiske said. “The thing is to treat the game like any other game. We looked to go 1-0 every week. Win that week is the goal.”

Magiske doesn’t feel pressure to rush for a certain number of yards. Not does he feel compelled to steer the defense.

“We try to get turnovers together,” he said. “The whole team has to do their job. If we execute and not have many mistakes,” he added, “then we’ll come out with the victory.”

Whether or not the Indians extend their season into the PIAA tournament, with a win over Gateway, Magiske has already scored a triumph in life thanks to his participation in football. He said the sport has taught him many life lessons.

“Team work and working together,” he said immediately. “Those are very important,” he emphasized to being successful later in life.