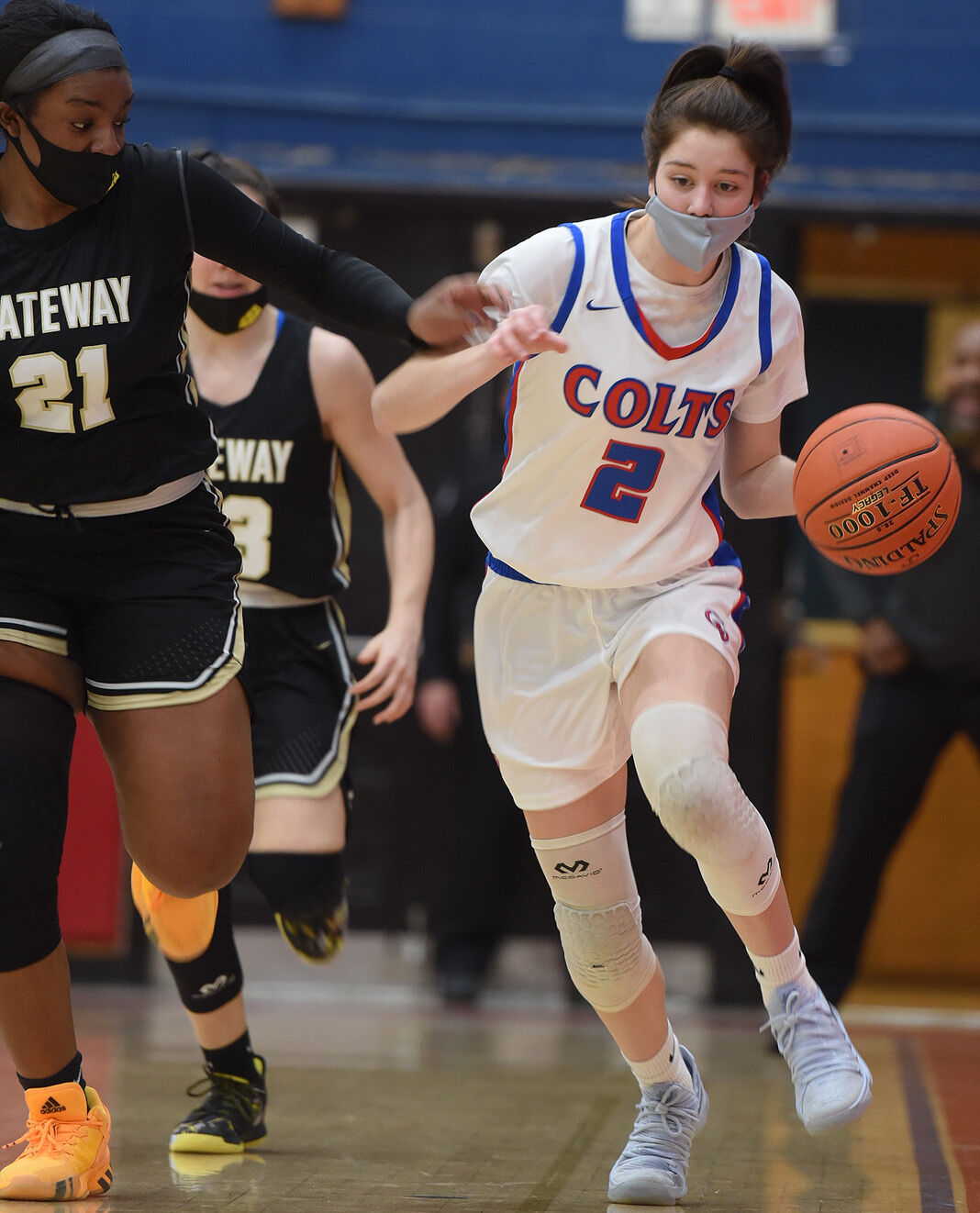 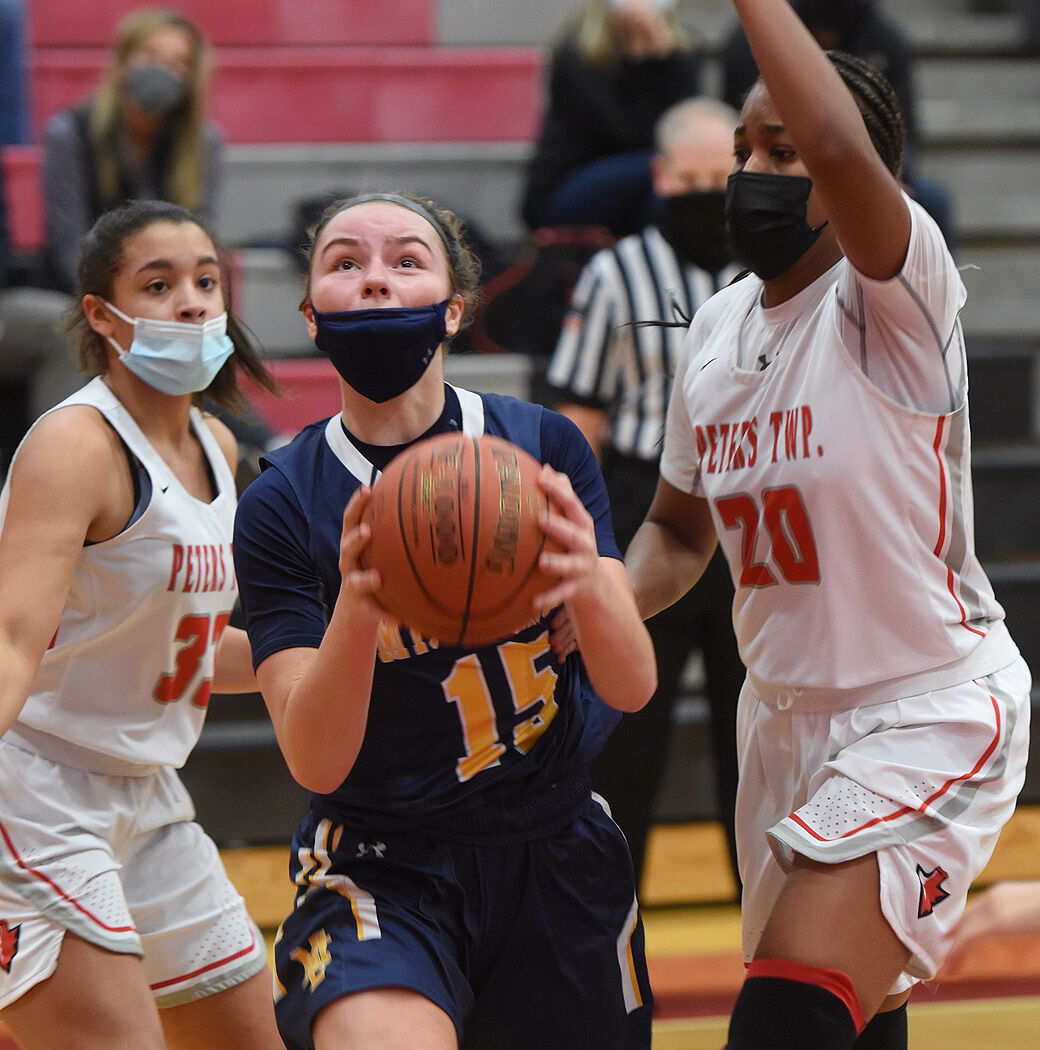 Mt. Lebanon’s Ashleigh Connor drives into the lane during a section game against Peters Township.

Mt. Lebanon’s Ashleigh Connor drives into the lane during a section game against Peters Township.

Aislin Malcolm from Chartiers Valley and Ashleigh Connor of Mt. Lebanon are proud of reaching the 1,000-point plateau as juniors, but they each still have other objectives on their minds.

“It’s a memorable moment,” Malcolm said, “but something that can be celebrated later. We are focused on more important things right now like winning WPIALs and states.”

Malcolm already is a two-time WPIAL champion and a PIAA winner. Her Colts were 9-0 in section heading into a battle at Oakland Catholic. CV was also 14-2 overall ahead of games at Peters Township Feb. 22 and at home against Rochester Feb. 25 to wrap up the regular season.

Connor, meanwhile, has Lebo poised to also wrap up a perfect record in section. The Blue Devils were 4-0 in Class 6A, Section 2 with home games left against Baldwin and Canon-McMillan before embarking on a playoff run.

Lebo, which was 12-3 overall heading into their final regular season games, has competed in the district and state playoffs in both of Connor’s previous seasons. The Blue Devils were WPIAL semifinalists in 2020.

“Scoring 1,000 points is pretty awesome and it’s a night I will always remember, but I’m glad it’s in the past,” said Connor. “There are new goals to be reached now.”

Malcolm and Connor are both on pace to become the all-time scoring leaders in their schools’ histories.

When she buried a 3-pointer during a Feb. 3 66-36 win over South Fayette, Malcolm became one of a handful of females in CV basketball history to surpass 1,000 points. MacKenzie Wagner ranks No. 1 with 1,670 points. Wagner played on CV’s state championship team in 2019 when Malcolm was a freshman starter.

Malcolm said eclipsing the school record is an “outstanding goal, but she wants another state tile most of all.

“Being the all-time scoring leader would rank up there with 1,000 career points, but states was more memorable than this,” she said. “With my team, we should be able to get it.”

When Connor scored a floater in the lane during a 48-28 win against Canon-McMillan Feb. 10, she became the sixth girl in Mt. Lebanon history to surpassed 1,000 points. Kim Seaver Robbins holds the school record with 1,806 career points.

While scoring 1,000 career points and breaking the school record rank “high” among her list of achievements, Connor said winning a team championship trumps any personal goals.

“Winning games is all that matters,” she said. “If points get us there, then that’s perfect because we are reaching for bigger things.”

While Malcolm is already committed to the University of Pittsburgh, where she will apply her 4.7 GPA towards an engineering degree while playing basketball, Connor is still weighing her collegiate options.

Ivy League schools, such as Princeton in her New Jersey birthplace, are interested in her 4.6 GPA as well as her skills on the court. Connor, who maintains a 4.6 GPA and hopes to pursue a pre-med or engineering degree, also has several other offers, including from Kennesaw State, Boston University, Villanova, Davidson and LaSalle.

“Obviously, I want to go to college and play,” Connor said. “Once I get to the school I like, I want to make an impact as a freshman and win whatever division we are in and go far in the NCAA tournament.”

As a freshman, Malcom averaged 11.6 points and 3.6 rebounds as the Colts rolled up a 30-0 record that included section, WPIAL and PIAA championships. As a sophomore, she gained all-state acclaim by averaging 16.7 points, 4.1 rebounds and 1.5 steals a game as the Colts posted a 27-0 record.

“Aislin is special,” said CV head coach Tim McConnell. “She can score. She may be one of the best shooters I have coached, but she’s also a great passer. She loves the game and she works very hard at it.”

As a freshman, Connor garnered The Almanac Rookie of the Year laurels and all-section acclaim by averaging 10.6 points and 3.1 steals per game. As a sophomore, she gained all-state accolades by managing 20.2 points, 5.6 rebounds and 2.9 steals an outing.

“Ever since she stepped on the court as a freshman, I knew that Ashleigh was a special player,” said Lebo head coach Dori Oldaker. “She has the ‘it’ factor.

“She loves the game. She competes everyday in every drill, in every play. She hates losing at anything,” the coach added. “She is a hard worker that continues to work at her craft. She is not afraid to have the ball in her hands when the game is on the line. She thrives on competition. She is a fun-loving, tough kid who has an amazing basketball IQ.”