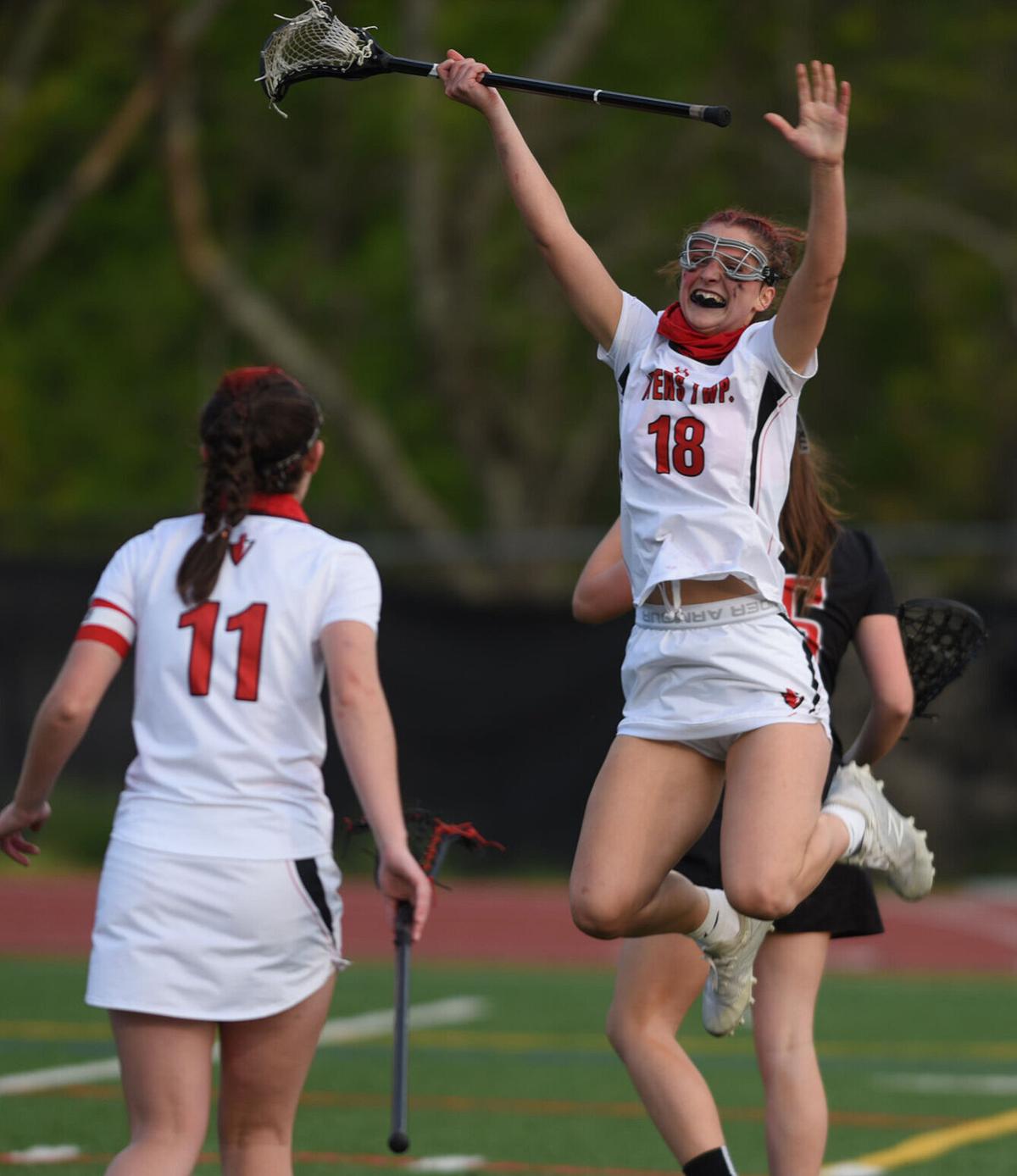 Karson Martin (18) jumps for joy after scoring the game-winning goal in Peters Township’s overtime victory against Fox Chapel in the first round of the WPIAL Class 3A girls playoffs Monday at Bethel Park. 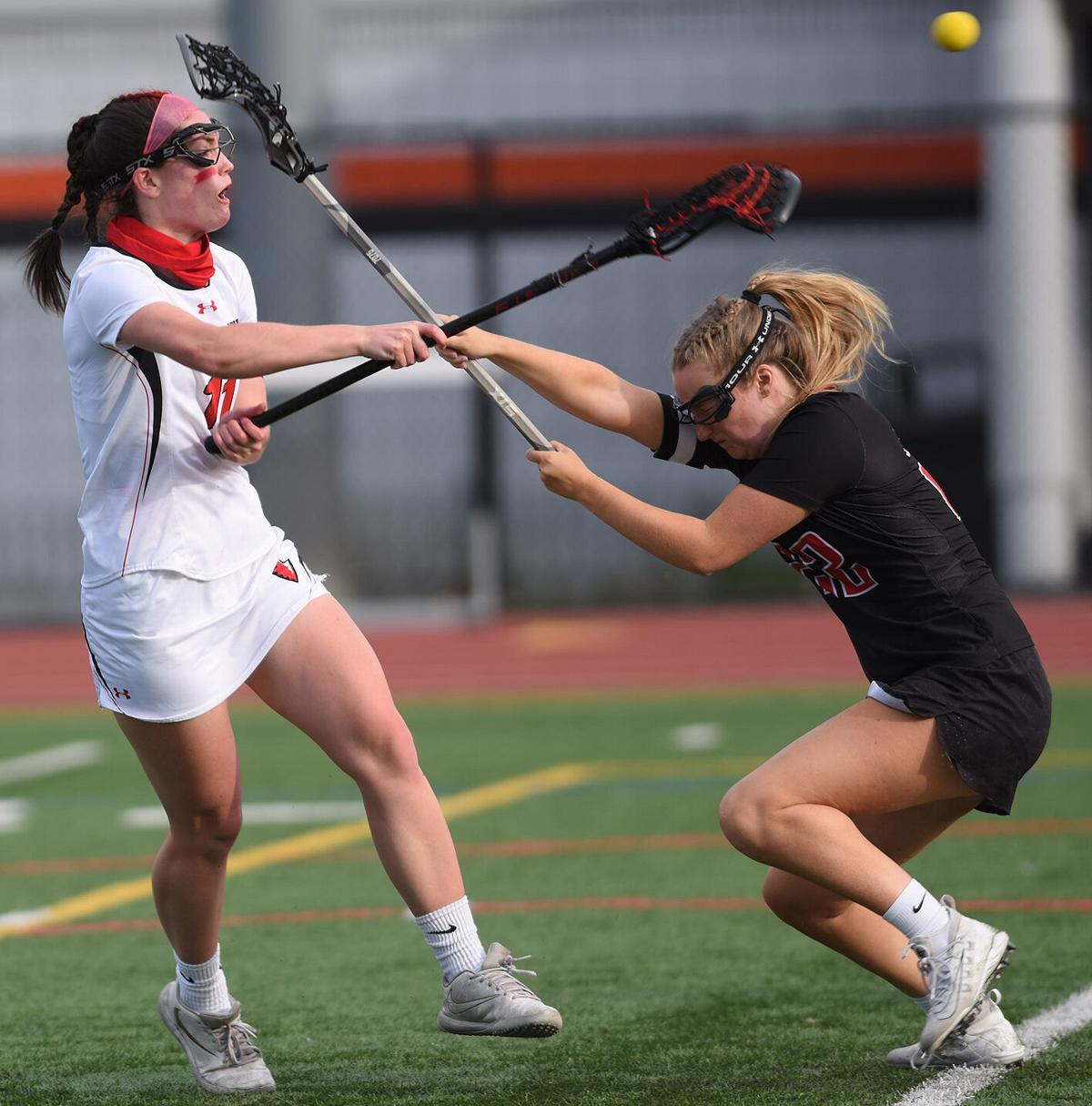 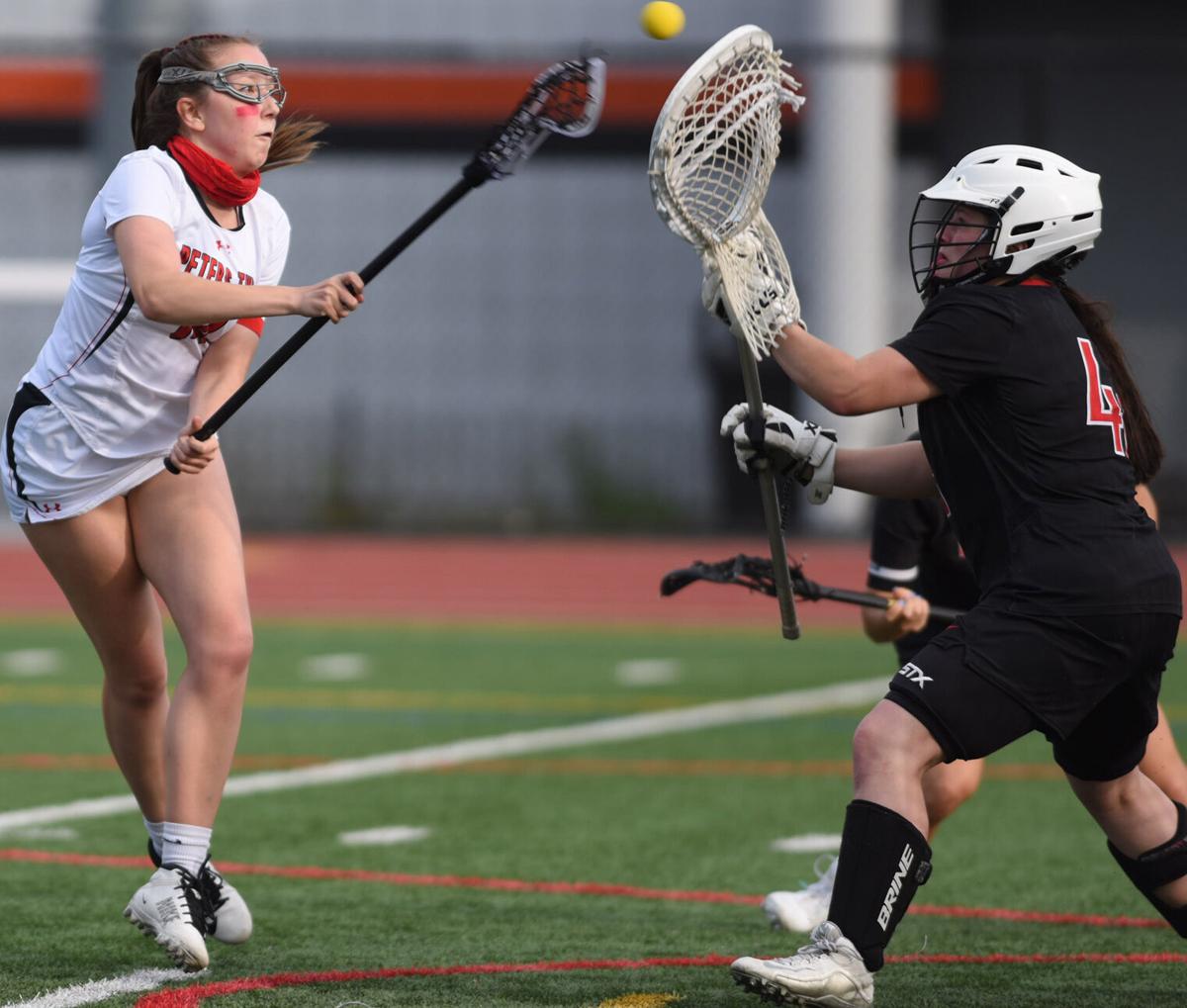 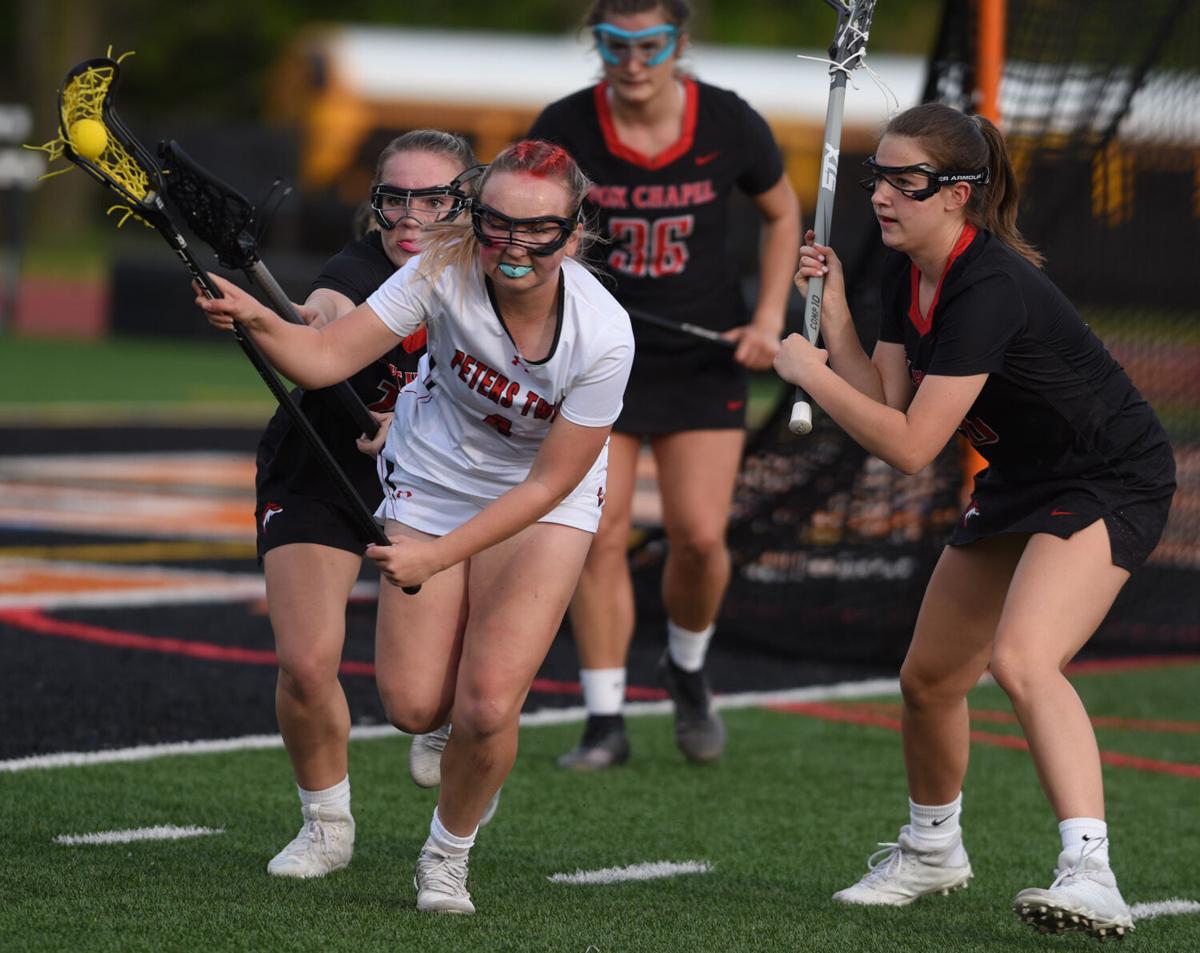 Delaney Kern (4) breaks out to possess the ball against a swarm of Fox Chapel defenders. 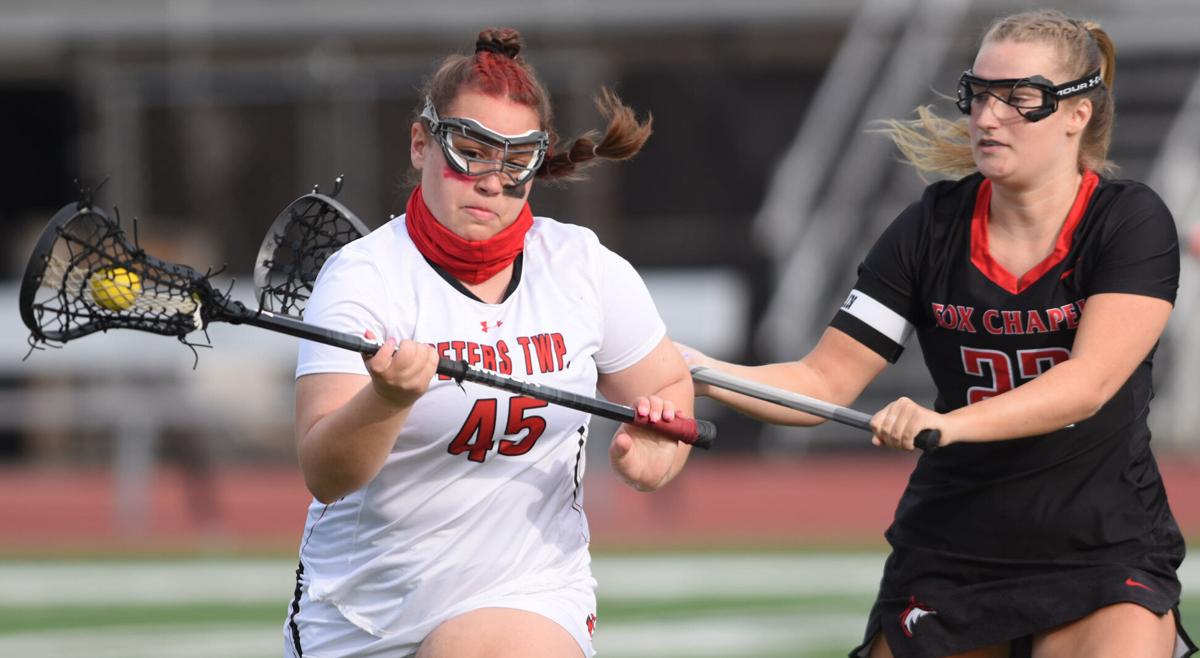 Elena Traficante (45) shakes off Fox Chapel defender Eliza Auffenberg (22) and carries the ball into the Peters Township end of the field during a WPIAL playoff game.

Karson Martin (18) jumps for joy after scoring the game-winning goal in Peters Township’s overtime victory against Fox Chapel in the first round of the WPIAL Class 3A girls playoffs Monday at Bethel Park.

Delaney Kern (4) breaks out to possess the ball against a swarm of Fox Chapel defenders.

Elena Traficante (45) shakes off Fox Chapel defender Eliza Auffenberg (22) and carries the ball into the Peters Township end of the field during a WPIAL playoff game.

The moment required a steady hand and a calm countenance. Karson Martin possessed neither.

“I was so nervous,” she said before she attempted a free position shot that would determine the fate of the Peters Township girls lacrosse team in the WPIAL Class AAA playoffs. “In my last game, I missed every one. So I was like I have to make this one.”

With 61 seconds left in overtime, Martin converted. Her goal lifted the Indians to a 9-8 victory over Fox Chapel at Bethel Park Stadium.

“I am so excited,” Martin said of the victory. “It was a rough game.”

With the win, the Indians advanced to the quarterfinals to face rival Mt. Lebanon. The Blue Devils shared the Section 1 title with Bethel Park and Upper St. Clair. All finished 9-1 in section while Peters Township followed at 7-3.

The Indians were 11-6 during the regular season. Their first win of the season came against the Foxes, 8-5.

“Fox Chapel is a formidable opponent,” said PT head coach Audrey Wilcox. “We knew we were in for a dogfight. We never took anything for granted.”

“Actually,” she laughed, “Karson is not good at converting those. She’s sort of a 50-50 girl. So that made the win even more awesome because she executed.”

Martin and Gabby Tom both executed. Each registered hat tricks in the match. Martin also supplied an assist.

“Our team just played like a team,” Wilcox said. “They fight all the way through. They don’t stop even when whistles are against us or a team. We just keep fighting hard.

“I thought if we could possess the ball, then my girls would come through. They have had a lot of hard situations this year that they have overcame so I knew that they had the backbone to get through something like this.”

Peters Township much like many spring sports clubs have battled through a pandemic for two years. Wilcox’s first season at the helm, the 2020 campaign, was canceled because of the coronavirus crisis.

Yet, the Indians banded together. Thanks to its senior class, PT rallied around the motto “All In”, which is emblazoned on the backs of their warm-up jerseys and practice T-shirts.

“Our seniors are an outstanding class of leaders both on and off the field,” said Wilcox. “Whether they play a lot or a little this class is a tight knit group that has led our team to work hard and to focus on the present. Strong leadership and a strong bond of friendship has been the key to our success.”

“By modeling strength, determination and composure, they have truly led our team,” said Wilcox.

King and Rubican lead the Indians in scoring along with Martin.

Rubicam, Martin and Tom are the playmakers, pacing Peters in the assist department.

King along with Devine and Nicole Lusk cause the most turnovers and also lead in ground balls.

In goal, Rachel Esselstyn recorded more than 100 saves during the regular season.

Martin follows the example of the seniors as a leader off the field. Academically, she maintains a 4.5 GPA and anticipates a career in bio-chemistry. She expects to play lacrosse in college. John Carroll University has already expressed interest in her talents.

Audrey Wilcox brings a wealth of knowledge to her position as head coach of the Peters Township girls lacrosse team.

Prior to moving to McMurray in 2010, she coached at Delaware Valley High School in New Jersey. She also was one of the founders of the girls youth lacrosse community team the Del Val Chargers.

In between, she took time off to move to Puerto Rico with her husband, JB, and to watch her daughter, Hannah, play lacrosse at Jacksonville University.

She is technically in her second season at the helm at PT. Her first campaign was curtailed by the coronavirus pandemic in 2020.