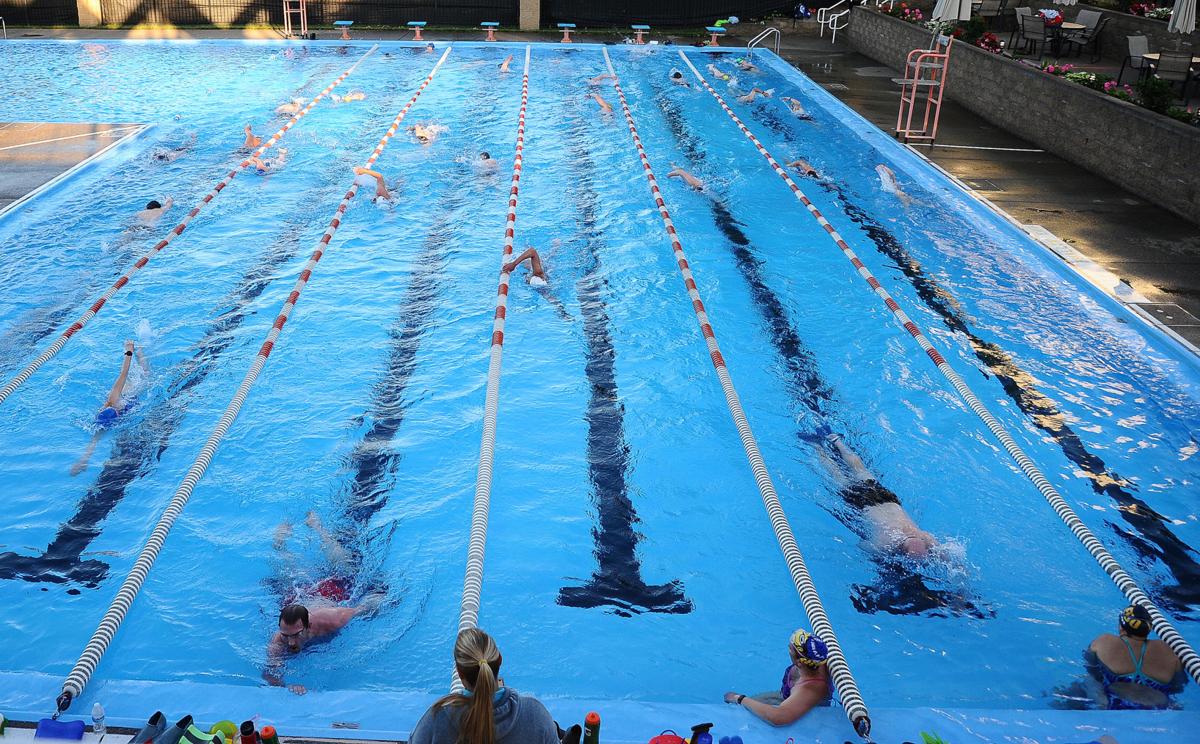 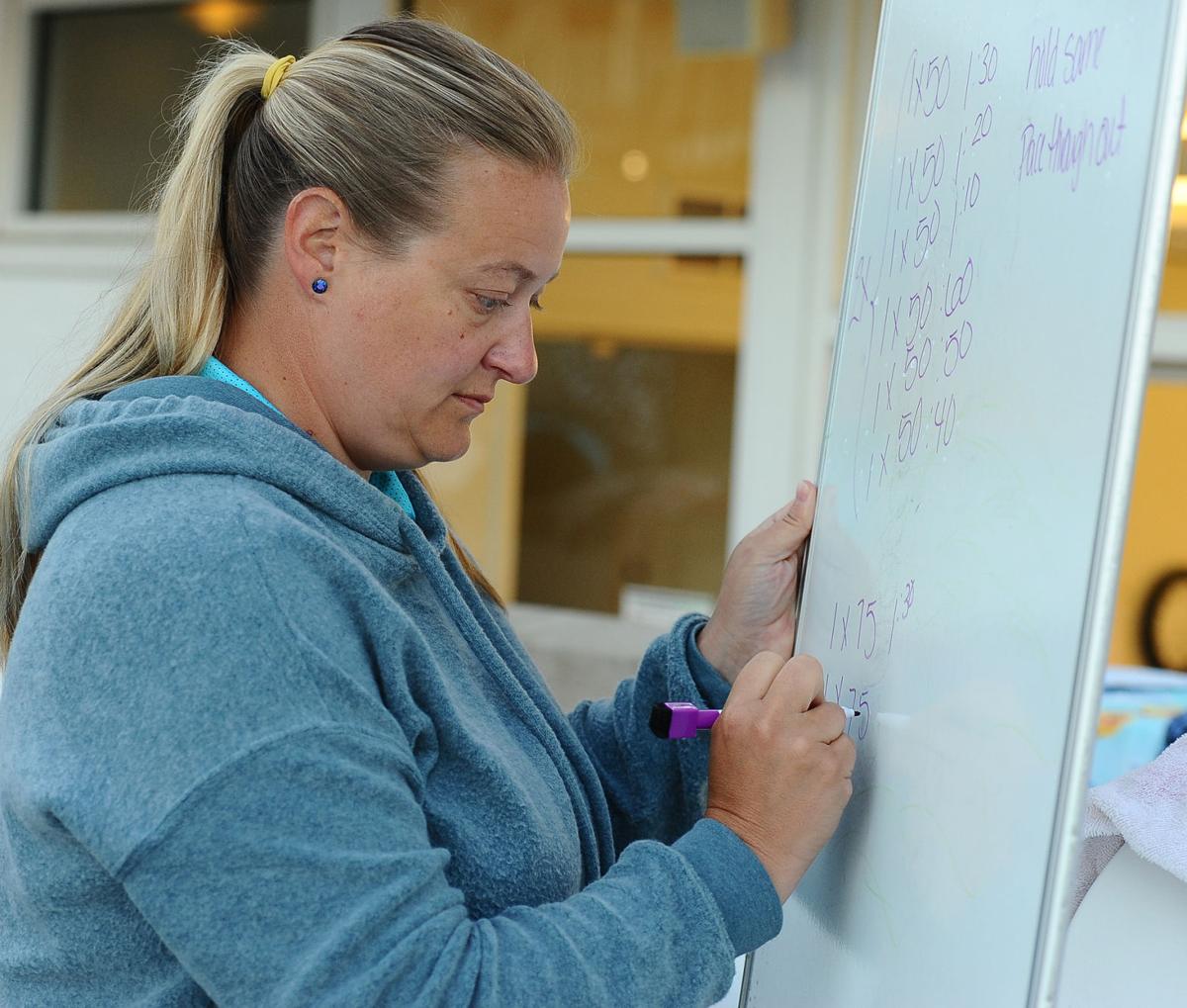 Alycia Miller writes the day’s workout on a white board for the masters swimmers. 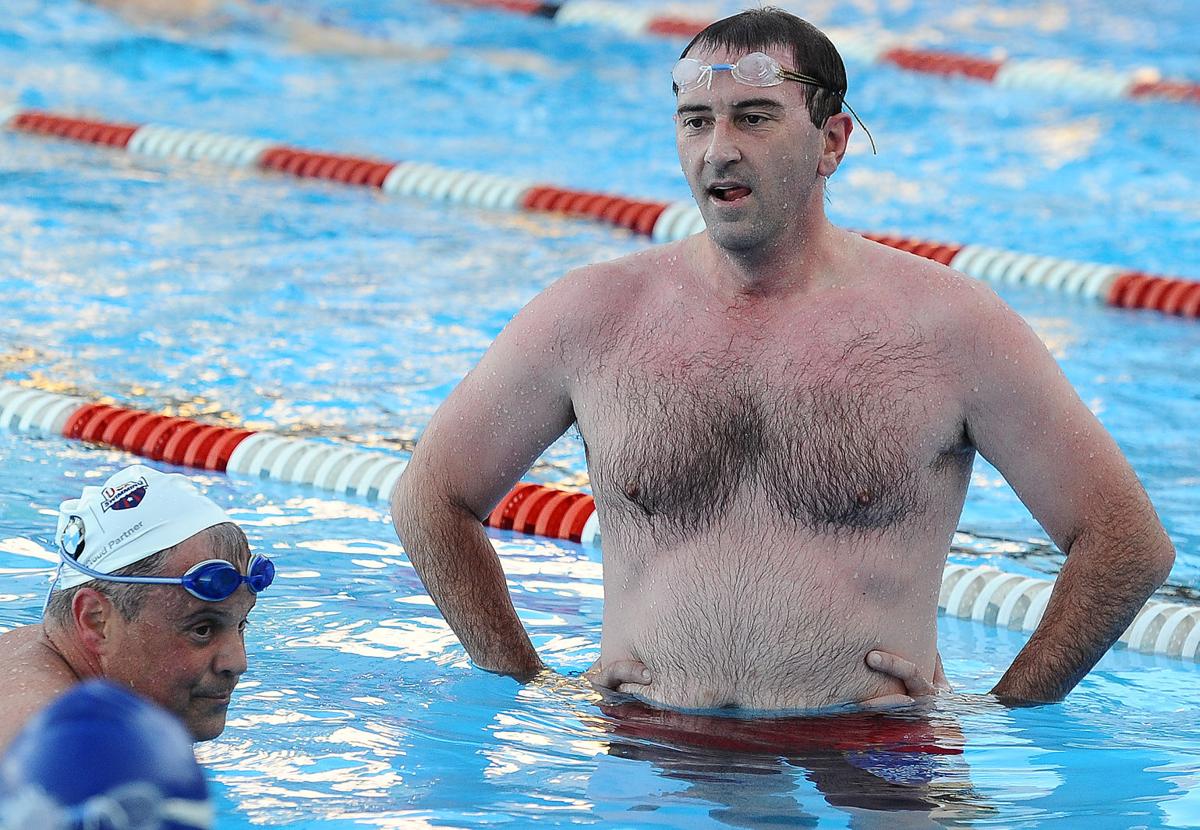 Mike Chiappetta takes a breather after some sprint work. 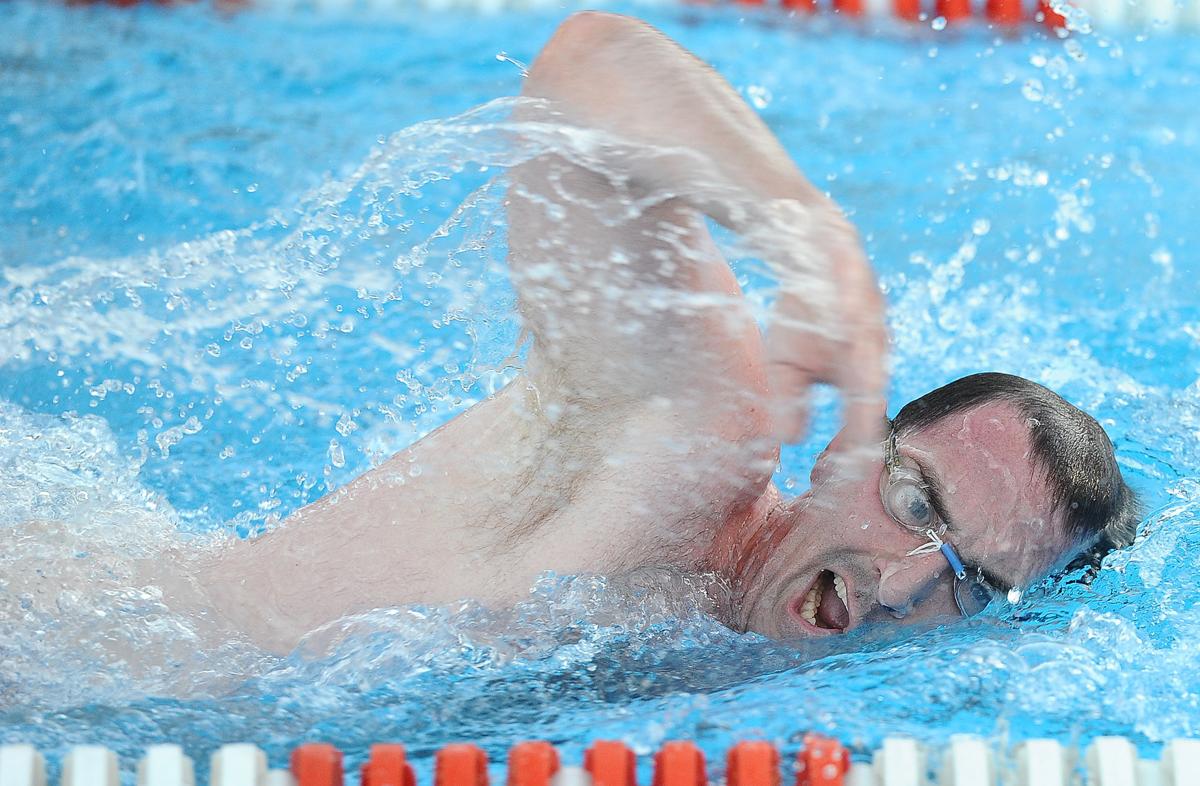 Mike Chiappetta takes a breath of air while completing a 50-meter sprint.

Jennifer Petyk uses a flotation board to work on her kick during a recent workout. 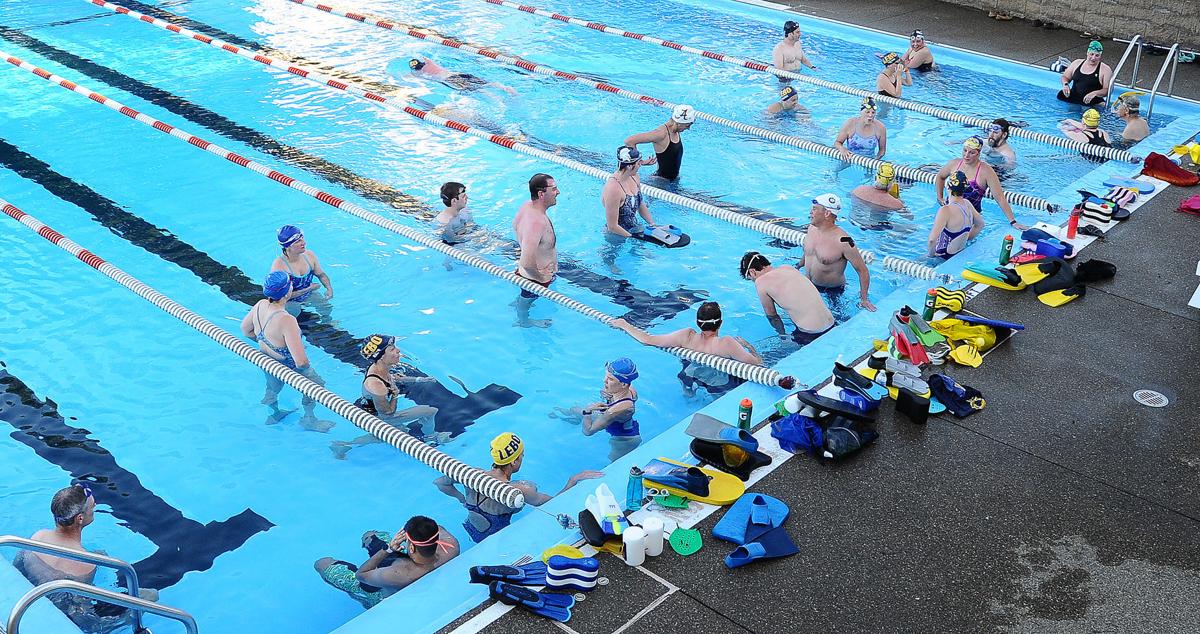 Swimmers take a break during their workout at South Hills Country Club.

Alycia Miller writes the day’s workout on a white board for the masters swimmers.

Mike Chiappetta takes a breather after some sprint work.

Mike Chiappetta takes a breath of air while completing a 50-meter sprint.

Jennifer Petyk uses a flotation board to work on her kick during a recent workout.

Swimmers take a break during their workout at South Hills Country Club.

Alycia Miller planned on having a busy summer.

In addition to her full-time position as University of Pittsburgh’s aquatic program coordinator, the Bethel Park resident was also going to manage the South Park Wave Pool. However, Allegheny County pools are closed this summer because of the coronavirus pandemic.

“With the guidelines put in place, it’s difficult for those larger pool facilities to operate,” Miller said.

“There is the 250 limit and even if you divided it a couple times per day, it’s still not going to give you what those maximums were and what they were used to bringing in on a daily basis,” she added. “It’s tough. We understand safety is always first, but I feel bad for the kids. Swimming is such a good exercise.”

Miller, who played field hockey at Pitt, is a certified lifeguard and WSI training instructor. At Pitt, she schedules lifeguards, teaches CPR classes to staff, helps with swim classes and assists with set-up and management for the Panthers varsity swimming and diving teams.

She is also involved with creating new programs for the Department of Campus Recreation.

“I love running the pools at Pitt and developing campus recreation,” said the former Lancaster County resident. “My favorite thing about Pittsburgh is the family feeling of the city and its various activities.”

In neighboring Mt. Lebanon, Miller has been assisting the community’s aqua club. She moved Mt. Lebanon Aquatic Club’s masters swimming program to South Hills Country Club, where she is the pool manager, because the township did not open its outdoor swim center this summer.

“I’m just glad that we were able to find water and get people back in and let them enjoy the swimming,” said Miller, who holds a master’s degree in exercise physiology.

“It’s great and it’s a good time, but I also thinks it’s really important especially mentally because a lot of folks need to have a break. Some of these people have been doing this all of their lives and some may have just started.

As many as 40 masters swimmers, ages 18 and older, rise early Mondays, Wednesdays and Thursdays to attend workouts from 6 to 7:30 a.m.

“I’m OK with this,” Miller said because normal MLAC workouts started earlier. “After three months off, I have not missed getting up at 4:15 every morning.”

The layoff has impacted workouts. The swimmers eased back into the pool. On average, they will complete up to 5,000 meters a workout. That’s anywhere between 2.5 and 3.1 miles per swim.

The group ranges from national competitors to open-water swimmers. There are also triathletes and fitness swimmers. They can swim year-round, but the summer outdoor season typically runs from June through August.

“Everyone is just trying to stay in shape,” Miller said.

David Hackworth and Mike Chiappetta are representative of the MLAC masters swimmers.

Before he started swimming 10 years ago, Hackworth was an avid runner. A standout at Riverview High School in Oakmont, he averaged 70-plus miles a week. He said he cycled “a little bit” and has completed a few triathlons.

Through a series of injuries, Hackworth discovered swimming as a cross-training sport. He has belonged to the masters program for the past seven years.

For the past three months, Hackworth spent a lot of time at home with his three young children, Colin, Owen and Abbey. The CNX Resources employee also worked out on an exercise bike in his basement and occasionally went out for a jog.

Because it was difficult to participate in organized activities, Hackworth welcomed the news of the startup of the masters program.

“It’s good to be back with a group and doing something together,” he said. “It’s much easier to get a swim in when you have other people in the lane pushing you to keep up with them.

“Obviously, it has been a struggle figuring out what’s safe and what’s not but getting out and getting exercise is important,” Hackworth added. “I’m glad we found a way to do that.”

Chiappetta said he will never complain about another practice set again. He said he bought a 10-foot inflatable pool so he could swim in his backyard.

“Just so I could get in and keep moving around,” he said of the purchase.

“Absolutely,” he added, “it was terrible being out of the water.”

Water had been Chiappetta’s world while attending Mt. Lebanon High School and Catholic University. He said he joined the masters program after injuring his arm eight years ago. After four seasons, he eased back into competition.

“It’s great to race again, fun,” he said. “There are still a lot of real fast people to swim.”

Chiappetta practices hard. The 48-year-old swimmer said the designed workouts are as challenging as the effort you put into them. He also noted there are varying levels in the pool and “it’s all about how hard you want to go at it.”

“You don’t have to be a top-notch swimmer,” he said of the program. “You can get in and do your own thing. That’s what’s great about it.”

Chiappetta said swimming attracts a number of people because it has the same appeal of other sports.

“It’s getting the opportunity to push yourself and see what you can do,” he said. “When you wondered ‘can I do that set?’ or ‘can I do that time?’ and then you do it, you gain a great sense of satisfaction and accomplishment.”

Visit http://www.mlacswimming.com/ for more information regarding the masters program as well as details concerning the fall season.