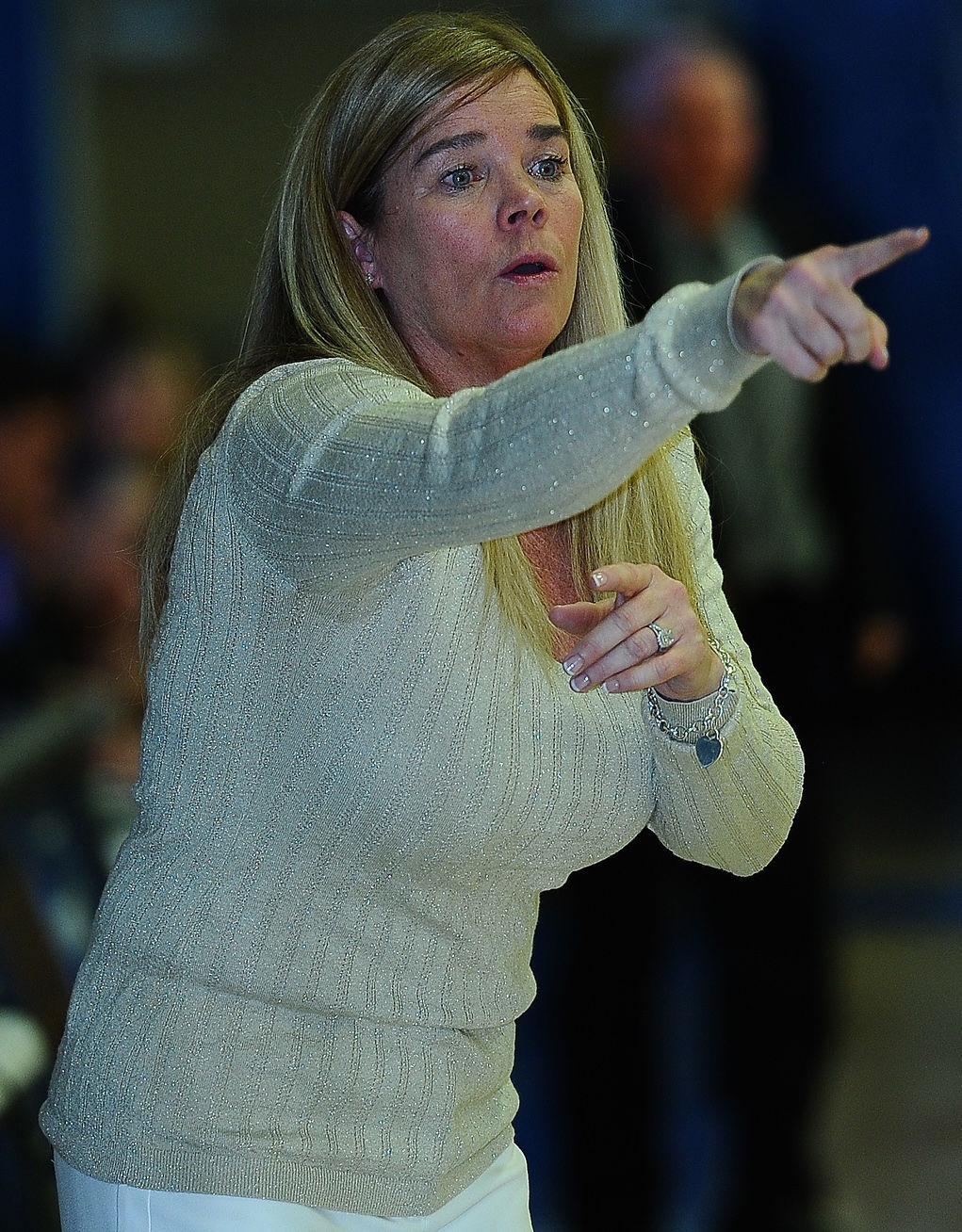 Kathy McConnell-Miller is in her first season coaching the Trinity girls basketball team. 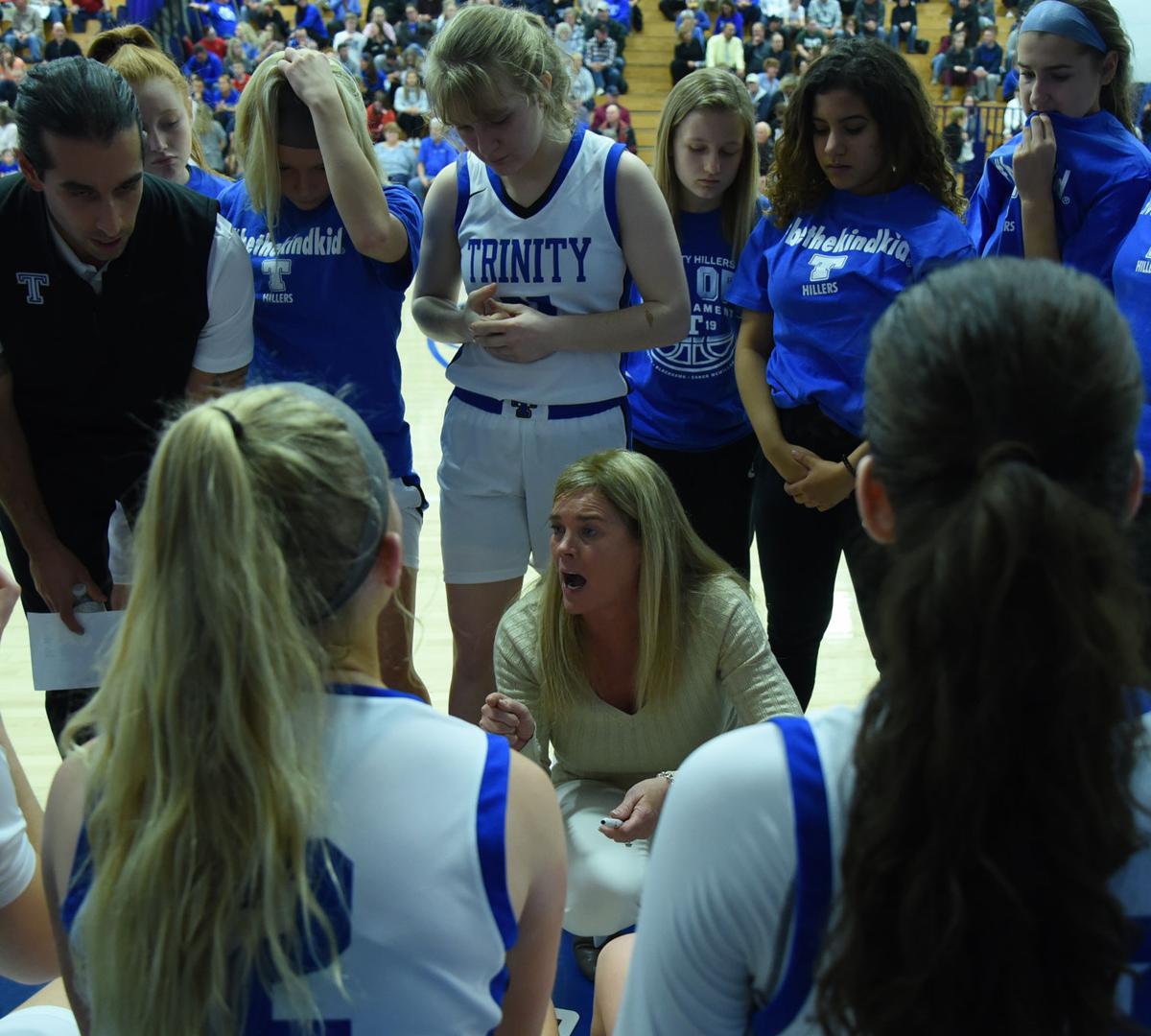 Kathy McConnell-Miller discusses strategy with her team during a timeout. 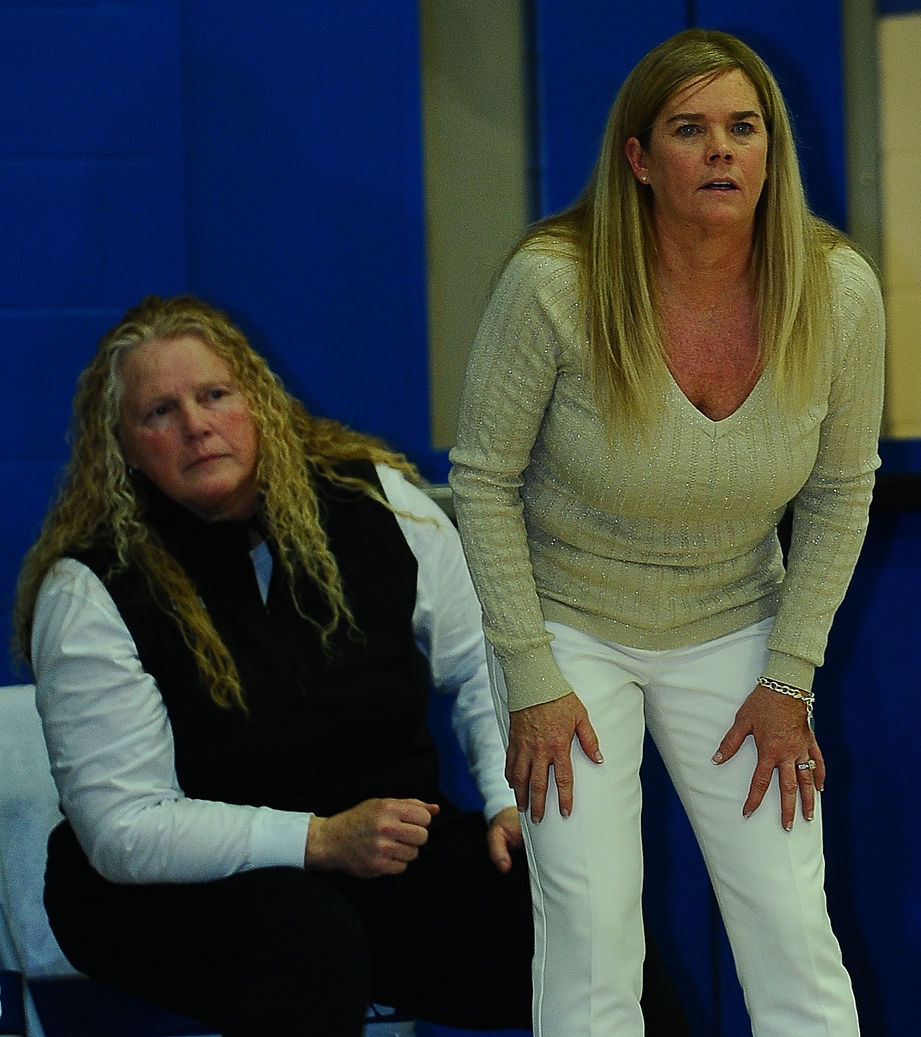 Kathy McConnell-Miller and her assistant Bobbi Belleville are looking to lead Trinity back to the postseason.

Kathy McConnell-Miller is in her first season coaching the Trinity girls basketball team.

Kathy McConnell-Miller discusses strategy with her team during a timeout.

Kathy McConnell-Miller and her assistant Bobbi Belleville are looking to lead Trinity back to the postseason.

As a mother, Kathy McConnell-Miller knew what she should do.

As a former collegiate and WNBA coach, the Mt. Lebanon resident wasn’t so sure about her career move.

McConnell-Miller accepted a position this fall as Director of Career and College Programs/Public Relations at Trinity High School in Washington and she agreed to take over the Hillers girls basketball program.

“It was a jump for me,” said McConnell-Miller, who has not been associated with high school basketball since helping Seton LaSalle win a PIAA championship in 1984. Since graduating from the University of Virginia in 1989, she has worked at the college and pro level, serving stints at Illinois, Colorado and Pitt as well as with the WNBA’s Tulsa Shock.

McConnell-Miller listened to her daughter and followed her heart. Macie Miller, the youngest of her three children, is a freshman at Mt. Lebanon High School and a member of the girls varsity basketball team. She has played in the community and school program since she was in third grade.

“I had a pretty good heart-to-heart with her, and Macie said that she didn’t want to move again,” said McConnell-Miller.

Macie wanted to go to the same high school her brother and sister attended. Both Lebo graduatess, Brice and Mackenzie are now students at Ohio University.

“When I heard those words, I just knew what I had to do. My whole life, I have moved my family for my career so no matter what, I would be doing this for Macie and for Pittsburgh.”

McConnell-Miller accepted the position after she said she was assured she was going to love coaching at the high school level by her sister, Suzie McConnell-Serio, a two-time Olympian with whom she worked at Pitt.

“The combination of those three won me over. They are all strong leaders and they are passionate about student-athletes,” she said. “When I met with all three of them, it just felt right. It helped, too, that as far as basketball, they have the same work ethic and commitment that rivals any college team. The girls’ work ethic is second to none. They really want to be good.”

Going against the best

On Jan. 2, the Hillers and McConnell-Miller wanted to be at their best for a match up with Chartiers Valley, the defending district and state champions.

Of the competition against her brother, McConnell-Miller first addressed his team, which features her niece, Meghan, a four-year starter and 1,000-point scorer.

“First of all, Tim has a great group of players. They are extremely talented and have great chemistry. They have played a lot of great competition and they know how to win,” McConnell-Miller said.

“Second, Tim’s a great coach,” she added. “He knows how to get the most out of everybody.”

Since an early age, Tim and Kathy have been getting the most mileage out of their sibling rivalry. While growing up on Dunster Street in Brookline, Sue and Tom McConnell’s eight children often engaged in sports battles whether in football, kickball or their beloved basketball.

“Oh man,” said McConnell-Miller, “we had battles all the time.

Usually Tim teamed with Suzie while Tom, the oldest who coaches at Indiana University of Pennsylvania combined with McConnell-Miller for two-on-two matches.

“Oh my goodness, it was always fun and the best memories,” McConnell-Miller said. “We’d go back and forth. Maybe we were .500 against each other, but the games taught us life lessons.”

McConnell-Miller learned much from her brother, Tim.

“There was never one moment that Timbo let up on me,” she said. “I don’t expect it when we play now.”

Although several years separate them, Kathy has grown close to Tim because of coaching. She spends Sundays from 9 a.m. to 12 p.m. coaching at the McConnell Academy in Carnegie. She’s a part-time member in his Friday night dinner club. Plus, Kathy has traveled with Tim to Philadelphia and Toronto to watch her nephew, T.J. McConnell, play with the 76ers. Tim’s oldest son currently plays for the Indiana Pacers.

“I’ve spent a lot of time with Tim in the car and at camps,” McConnell-Miller said. “So I’m very connected to him now. We have a great relationship. There are not many days that we don’t talk to each other.

“(As a coach), I respect him more than anybody could,” she added. “I didn’t really get that opportunity to watch him coach until recently because I had always been away. But I have gotten to see who he is as a coach. I love what he does and how he gets the most out of his players. He really cares about them. “

“Anyone who know hims, knows that there is nothing in the world he hates more than losing,” McConnell-Miller said.

McConnell-Miller said she doesn’t “feel pressure” in regards to coaching against her brother.

“When I hit the pillow at night, I know that I have them prepared and they know what they need to do,” she said. “It doesn’t always happen that way. That is why they tip it up. But, my players are excited about these games. I don’t think it will be the last time we play them.”

McConnell-Miller said she also hopes to put the students she counsels at Trinity into positions to be successful after graduation.

“It’s all about readiness,” she said of her position on Trinity’s faculty. “I’m learning a lot. Since I am familiar with transitioning high school students, this is a great transition for me. I love the school and I love what I am doing here and am enjoying the interaction.”

McConnell-Miller said she doesn’t see much difference between her players at Trinity and those that she has coached at the collegiate level.

“For me, I’m not seeing a lot of difference with the commitment level and coaching ability,” she said. “My girls desire to be good. I’m fortunate to have a team that I can teach like a college level and are focused on player development because several of them will be playing at the next level. I’m training them and teaching them to be at the next level.”

McConnell-Miller said despite her desire to develop her players, they all have another common goal.

“I do want to win,” she said. “When I came in, though, the team made it perfectly clear they want to win. A lot of team talks about it, but my players aren’t afraid to talk about winning championships and doing the things necessary to accomplish that.”

For now, McConnell-Miller said she is happy to be close to family.

“God puts us where we are supposed to be. This is my place,” she said.

Kathy McConnell-Miller is not the only connection to Tim McConnell, the legendary Chartiers Valley basketball coach.

Her assistant coaches have ties to McConnell. Bobbi Belleville played at Geneva College when McConnell was there. Billy Poletti played on McConnell's 2004 WPIAL championship club.