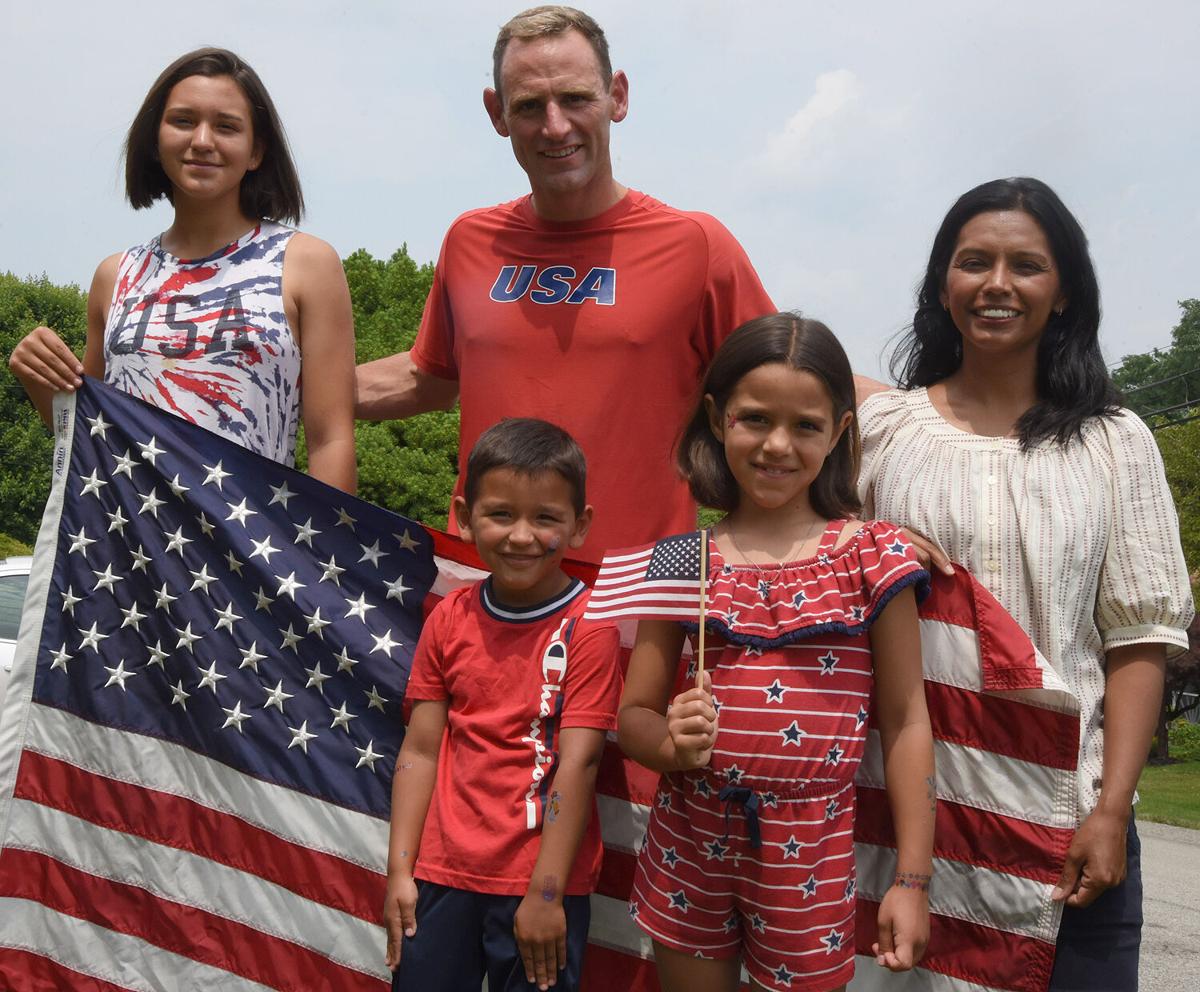 Eric McElvenny poses for a picture with his wife, Rachel, and children, Lupe, William and Elise. 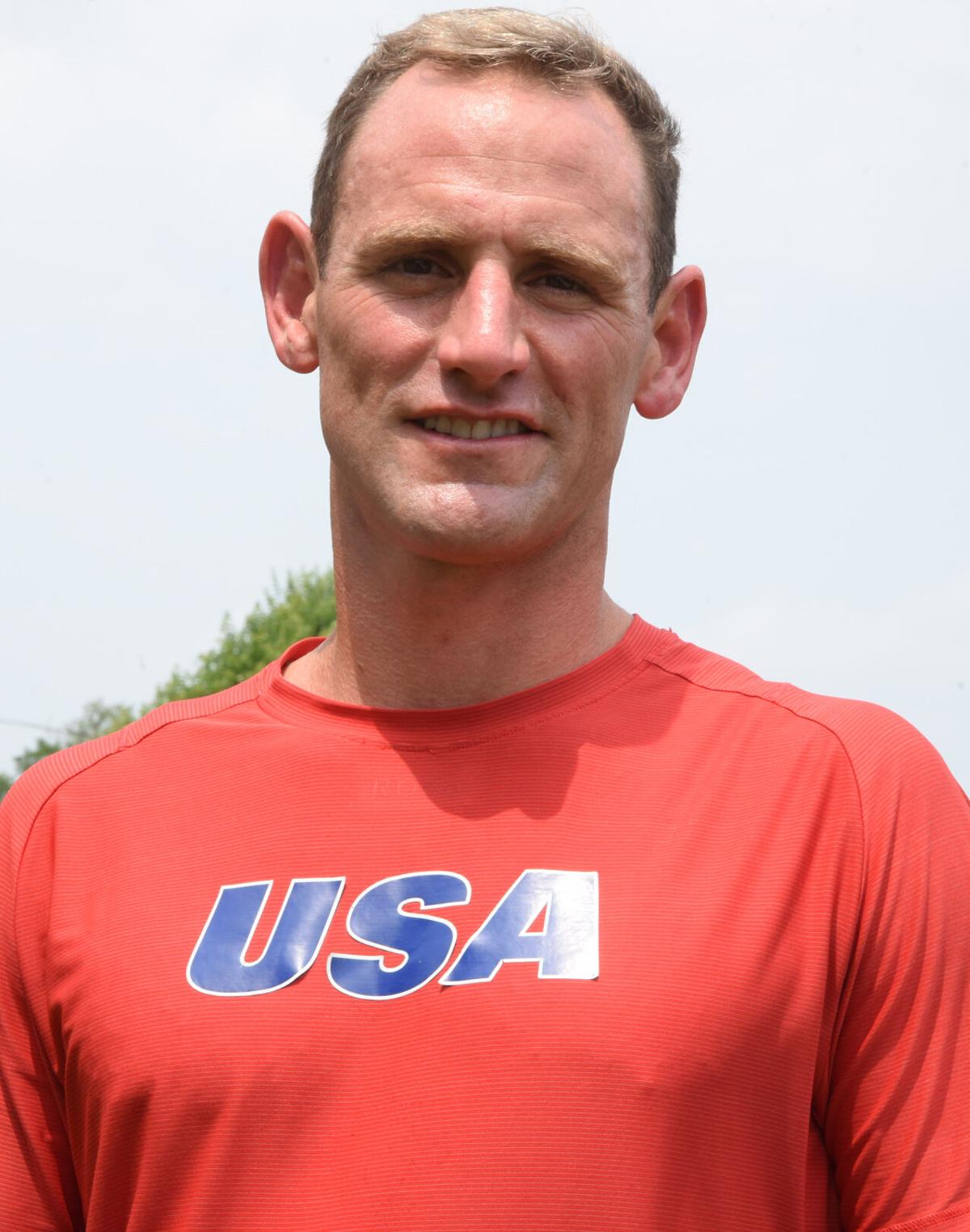 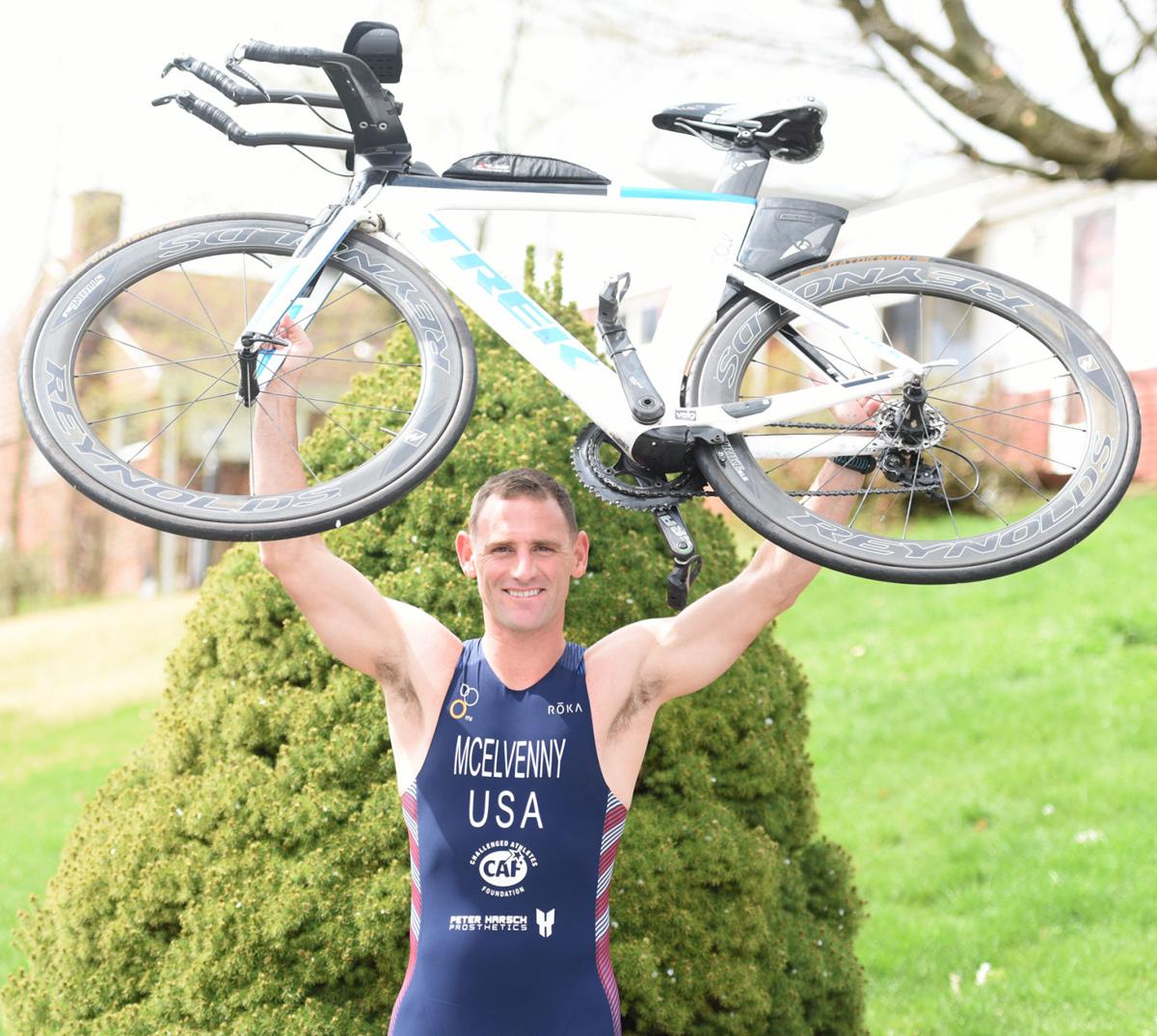 Eric McElvenny holds the bike he uses during competition. 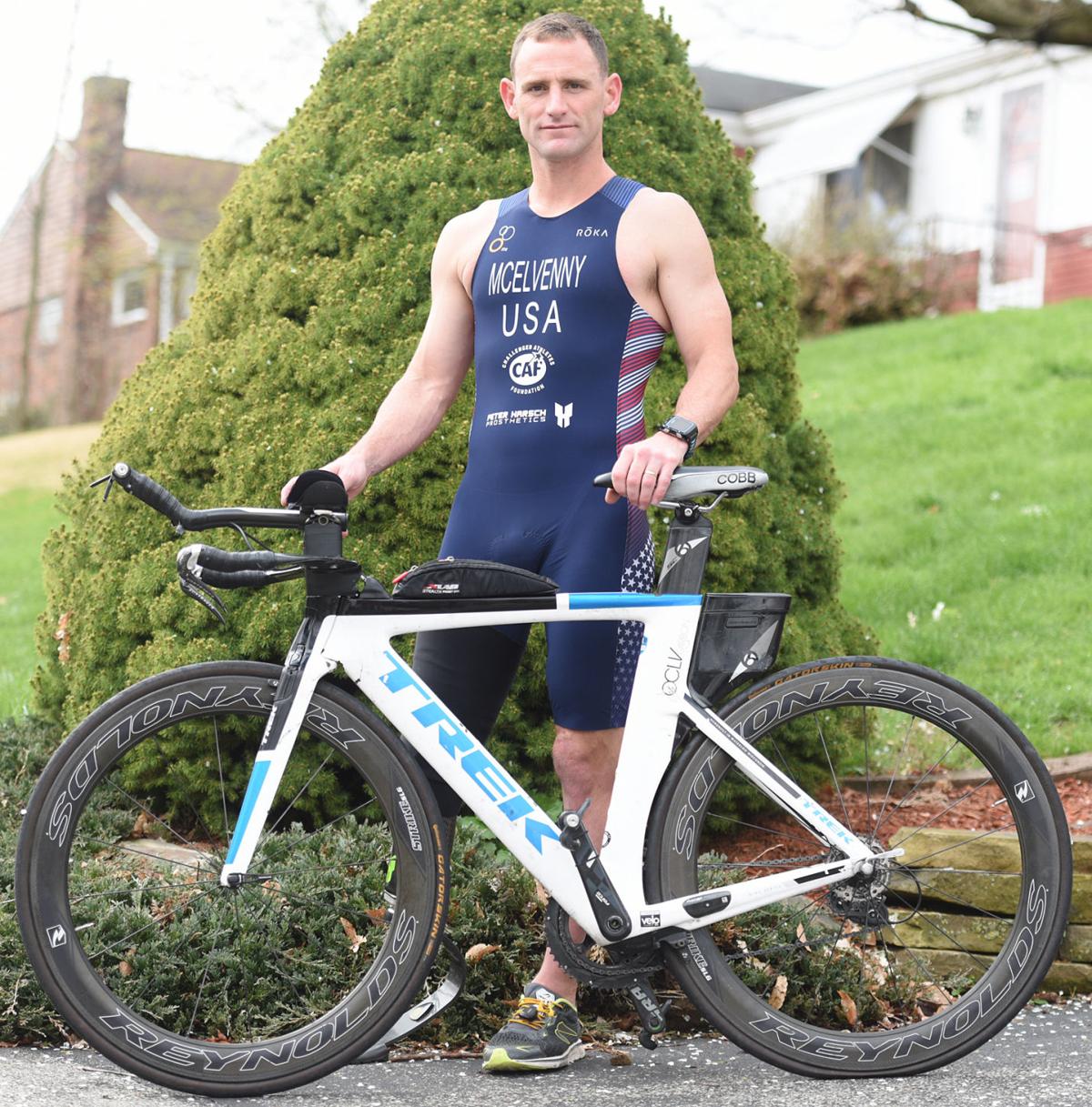 Bethel Park resident Eric McElvenny will compete in the Paralympic Games to be held in Tokyo, Japan. He ranks as one of the top eight competitors in the world in the PTS4 men’s division.

Eric McElvenny poses for a picture with his wife, Rachel, and children, Lupe, William and Elise.

Eric McElvenny holds the bike he uses during competition.

Bethel Park resident Eric McElvenny will compete in the Paralympic Games to be held in Tokyo, Japan. He ranks as one of the top eight competitors in the world in the PTS4 men’s division.

When Eric McElvenny lost his leg in Afghanistan, he vowed he would accomplish something big.

On July 6, 2021, the Bethel Park resident did. He was named to the U.S. Paralympic Triathlon Team.

McElvenny will represent the United States at the Paralympic Games being held Aug. 24-Sept. 5 in Tokyo, Japan. His race will be televised live at 5:30 p.m. Aug. 27 on NBC.

“Every year since I was little, I’ve watched the Olympics in awe. I looked up to the athletes and rooted for our country,” McElvenny said.

“Now I get to wear the colors and compete. I only have gratefulness and pride in my heart.”

McElvenny acknowledged he is beholden to many for fostering his fantasy.

Raised in Rostraver Township, McElvenny graduated Belle Vernon Area High School a decorated veteran athlete in 2001. He earned all-conference honors as a defensive back on the football team and was named all-section as a shortstop on the Leopards’ baseball team.

After spending a year at a prep school in Rhode Island, McElvenny earned an appointment to the U.S. Naval Academy. For three years, he played baseball and rugby for the Midshipmen.

Upon graduation in 2006, he embarked on raising a family while completing his military commitments.

Upon finishing his officer and infantry training at the Marines Corps Base Quantico in Va., he was assigned to Camp Pendleton in San Diego in 2007. He was attached to the Second Battalion, Fourth Marines and was deployed overseas three times. He served stints aboard ships in southeast Asia and in the Middles East before he was wounded in Afghanistan.

While leading a small team of four on a routine patrol, McElvenny said he stepped on an IED. He lost his right leg, which was amputated four inches below his knee. Shrapnel also damaged his left leg.

Approximately two months after the December 2011 incident, he was fitted for a carbon-fiber prosthetic leg.

Within six months, he competed in his first triathlon – a sprint event featuring a 750-meter swim, 18-mile bike race and 5-kilometer run. McElvenny has completed more than 50 triathlons and as well as eight Ironman competitions, which consist of a 2.4-mile swim, 120-mile bike and marathon run of 26.2 miles.

McElvenny qualified for this year’s Paralympic Games in the PTS4 men’s category by accruing enough points during three sanctioned international and continental events.

He earned his first World Triathlon Para Series medal when he finished third in Leeds, England. The following week, he flew to France and secured second place before winning the Americas Triathlon Para Championships in Pleasant Prairie, Wis., June 28.

“I knew what I had to do,” said McElvenny.

Only two in each of six different categories clinched a spot on the national squad. There are nine eligible spots from all over the world in each category.

At the start of the season, McElvenny sat in 16th position worldwide. After his three qualifiers, he ranked eighth in the world. His U.S. teammate Jamie Brown is seventh.

“I was glad to sneak in there,” McElvenny said. “It was extra special to win my last race. It felt good.

“It’s hard to realize,” he continued. “I’m still processing the news. It’s been a crazy year.”

After quarantining throughout 2020 because of the pandemic, McElvenny experienced an even more bizarre beginning to 2021. In March, he and his family contracted COVID-19. The disease interrupted his training.

“Wasted a month of working out. I didn’t feel 100% until three or four weeks after (catching COVID),” he said.

Additionally, McElvenny’s passport was lost in the mail. As a result, he missed participating in one of the opening qualifying events held in Japan. The May race was McElvenny’s first “big chance” to earn points,” he said.

“It was a frustrating spring. The timing was not good,” McElvenny said. “There were definitely times I thought ‘no way’ this is not going to happen and that God doesn’t want me to do this.”

Until he travels to Hawaii for a Team USA acclimatization camp, McElvenny is doing all he can to make a spot on the podium. He has increased his workouts and has scheduled the U.S. Para National Championships in Long Beach, Calif., as his final tune-up race.

He swims five times a week at the Mon Valley Health Club, amassing between 4,000 to 5000 yards. He averages 30 to 35 miles running a week. Recently, he stopped at the nearby Thomas Jefferson High School track and completed a seven-mile workout that consisted of 200-meter intervals and short jogs. He averages 100-150 miles a week on his bike, balancing long, slow easy rides with hill repeats using crests in South Park for his climbs. Additionally, he completes sprint workouts on the indoor trainer.

“The goal is to get in the absolute top shape, be the fittest I can be,” McElvenny said.

McElvenny said the difference between third and sixth places in his qualifying races was mere seconds.

“I got to wear the uniform as a marine,” he continued. “Now I get to represent the country again. Nothing has made me prouder.”