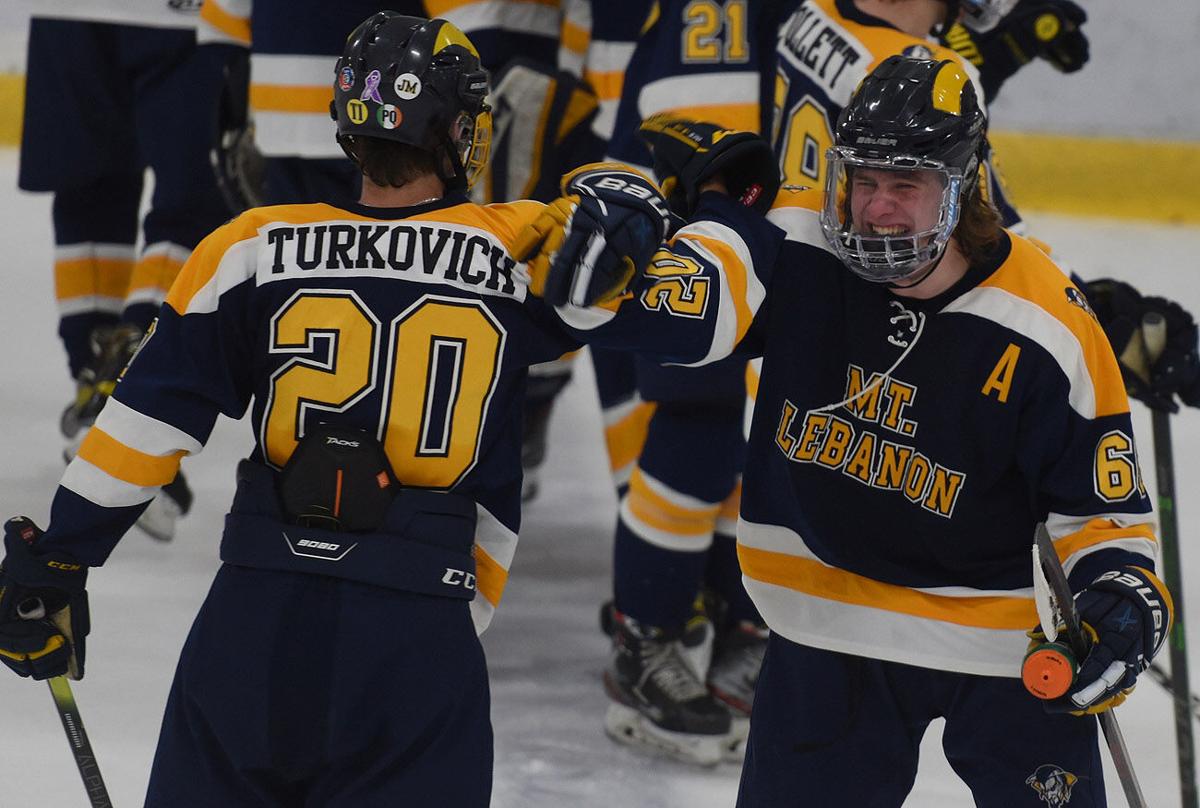 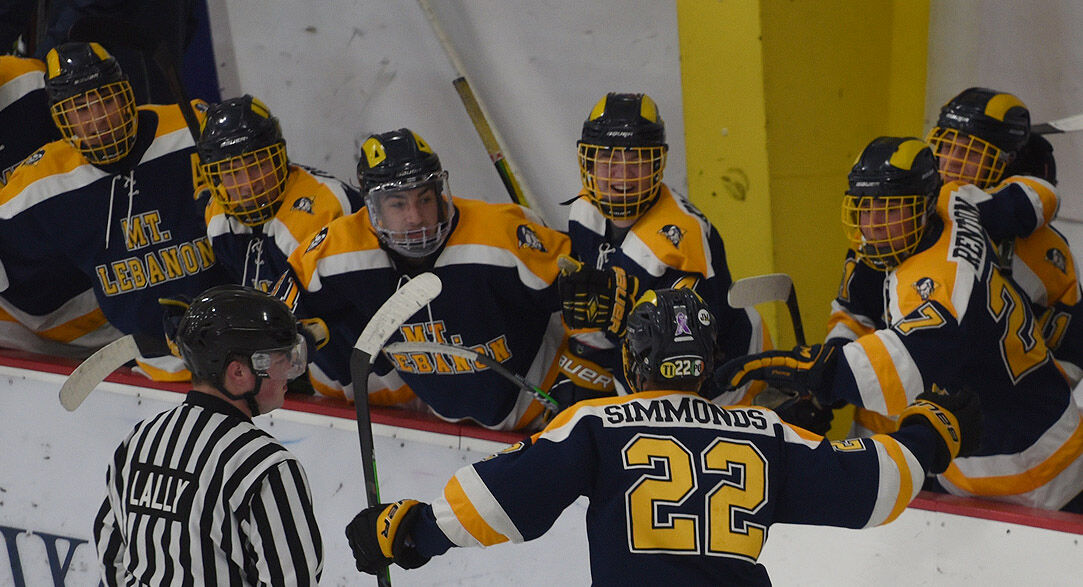 Mt. Lebanon’s Marcus Simmonds is congratulated by players on the bench after scoring the winning goal in Mt. Lebanon’s victory against Pine-Richland in a PIHL Class AAA semifinal game.

Mt. Lebanon’s Marcus Simmonds watches as his shot slips into the net despite the defensive efforts of North Allegheny’s Alex Erlain and goalie James Saber.

Mt. Lebanon’s Marcus Simmonds is congratulated by players on the bench after scoring the winning goal in Mt. Lebanon’s victory against Pine-Richland in a PIHL Class AAA semifinal game.

Mt. Lebanon’s Marcus Simmonds watches as his shot slips into the net despite the defensive efforts of North Allegheny’s Alex Erlain and goalie James Saber.

The Mt. Lebanon hockey team has participated in its own March Madness since suffering a 3-0 regular-season loss against Canon-McMillan.

The Blue Devils won six of their last seven games and earned a No. 7 seed in the PIHL playoffs.

After upsetting No. 2 seed Canon-McMillan 2-1 and No. 3 seed Pine-Richland, Lebo now finds itself vying for its first PIHL title since 2006.

“We struggled earlier in the year and we were psychologically fragile,” said Lebo head coach Jeremy Church of the team’s 1-8 start. “After the C-M game, I knew we could play really well. Not necessarily get here but we would win a lot of games.

“After the C-M loss, we had to win out to get into the playoffs,” Church continued. “We have been treating this like the NCAA tournament since. Round of 64. Round of 32.”

The only blip on Lebo’s run-up to a playoff berth was a loss to NA. The Tigers won 3-2 after 13 rounds of a shootout, in which Lebo hit the cross bar on its final attempt.

“Crazy game,” said Church, who took over coaching the team March 8 at the request of the high school’s board of directors.

Church expects another wild contest when the Blue Devils face the Tigers, who improved to 15-5-2 overall after upsetting top-seeded Peters Township 4-3 in the other semifinal clash.

North Allegheny’s Connor Chi scored twice against Peters Township, including the game winner 30 seconds into overtime. Chi has four playoff goals and 16 on the season.

“They have a tremendous team with a great tradition,” Church said. “Obviously (Chi) is incredible player that you have to account for any time he is on the ice and their coach (Mike Bagnato) does a nice job no matter where he has gone.”

Church said he anticipates making the “same calculations” against NA as he did in defeating Pine-Richland. He said the Rams were a “carbon copy” of the way the Blue Devils like to play, which is get the puck up the ice in transition, get in deep and go hard on the forecheck.

“So the plan was the best defense is a good offense,” Church said. “We wanted to stay in their zone as much as we could to keep their offensive guys out of our end.”

The strategy worked as the Blue Devils kept the Rams scoreless in the first and third periods. Pine-Richland got on the scoreboard at the 2:18 mark in the second period when Samuel Perry scored off an assist from Alex Erlain and when Liam Varmecky’s shot just over the blue line was deflected into the net at the 16:28 mark.

Back-to-back goals by Conner Ribstein and Trevor Turkovich vaulted Lebo to a 2-1 advantage. Aidan Weaver assisted Ribstein’s tally at the 4:58 mark. Liam Byrne was credited with an assist on Turkovich’s goal at the 10:05 mark.

At the 5:53 mark of the third period, the Blue Devils’ Marcus Simmonds scored the decisive goal on the power play. Ryan Patrick and Nolan Lynam assisted.

“At the end of the second period there was a big swing there but we felt like we were in control,” Church said. “We were doing what we wanted to do. They are a very good team with a lot of top-end talent.”

Lebo, however, relies on its entire roster to succeed.

“Our strength is the team. The pack,” said Church. “We can roll four lines and can have a different hero on any given night.

“These guys have a great attitude on the bench, whether they get five shifts or 15 shifts. Everyone is pulling for one another. That’s not just hockey. That’s championship hockey.

Mt. Lebanon goaltender Austin Martin played a big role. He faced 28 shots, turning away 26 for a .929 save percentage. The Blue Devils put 25 shots on goal.

“Austin has been locked in and has risen to the occasion,” Church said.

All the Blue Devils have done the same and now a championship is within their grasp.

“So far in these playoffs what you have seen is that seeds one through seven are pretty even. Anybody can beat anybody,” Church said. “It is going to come down to who wins the special team’s battles. Fortunately, against Pine, we were able to do that.”

The Colts will face Indiana in the finals set for 9 p.m. April 19 at the Robert Morris University Island Sports Center.

Greg Kraemer registered a hat trick, scoring all three of his goals in the second stanza.

Logan Marnik faced 44 shots, turning back 42 for a .955 save percantage. The Colts put 31 shots on goal against the Cavaliers, who finished 15-4-1 overall.