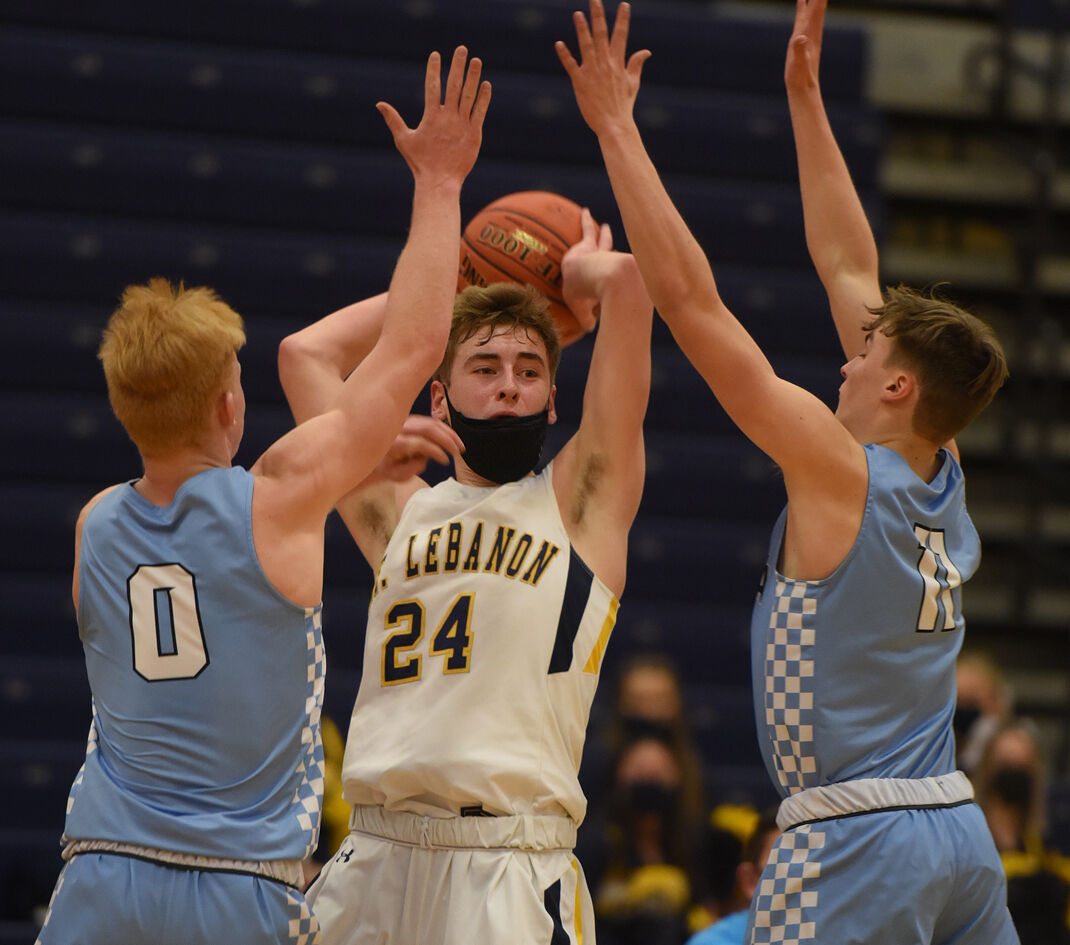 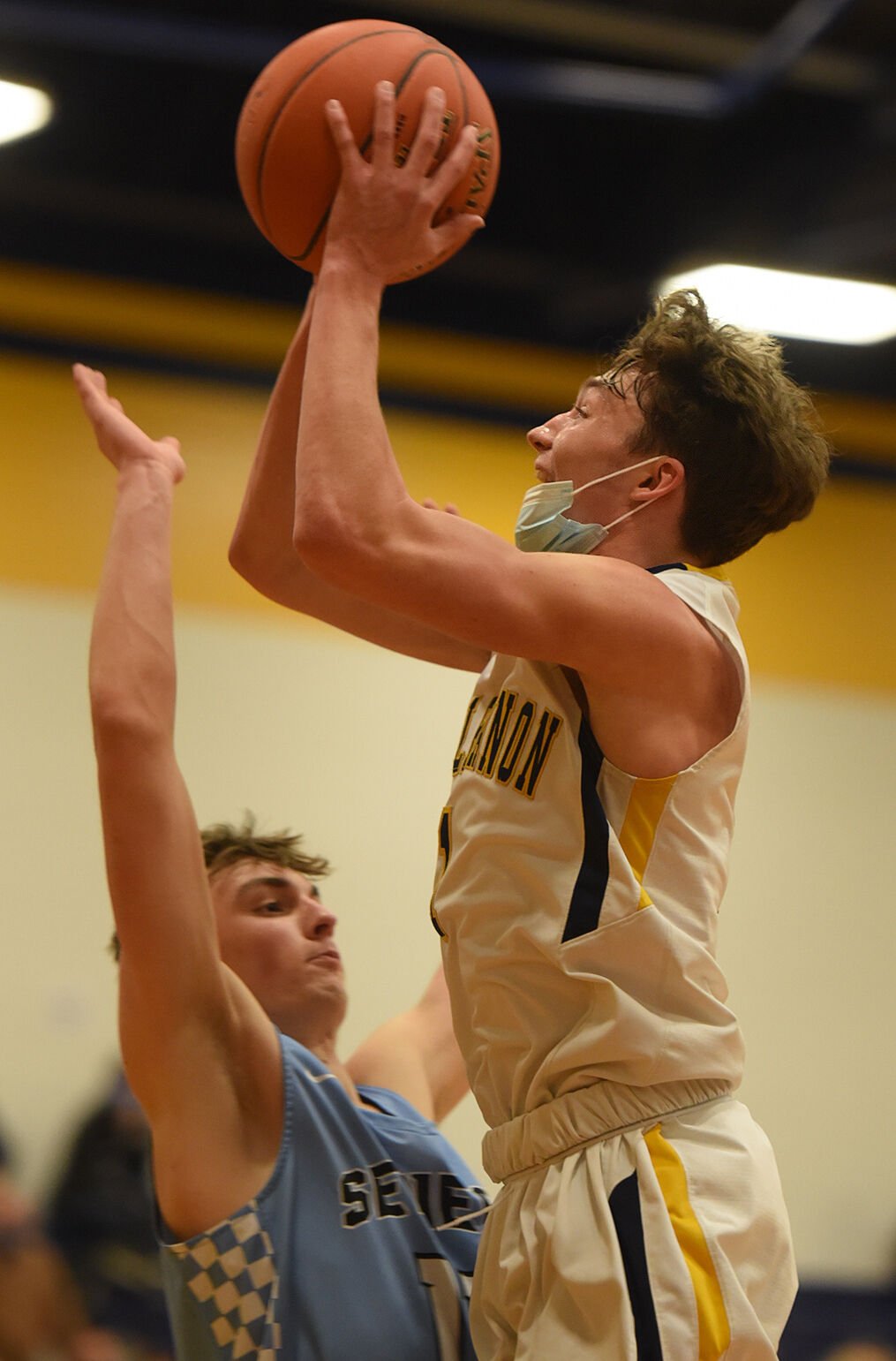 Mt. Lebanon's Evan Sentner rises above a Seneca Valley defender and launches a shot during the Blue Devils' 72-54 loss to the Raiders. 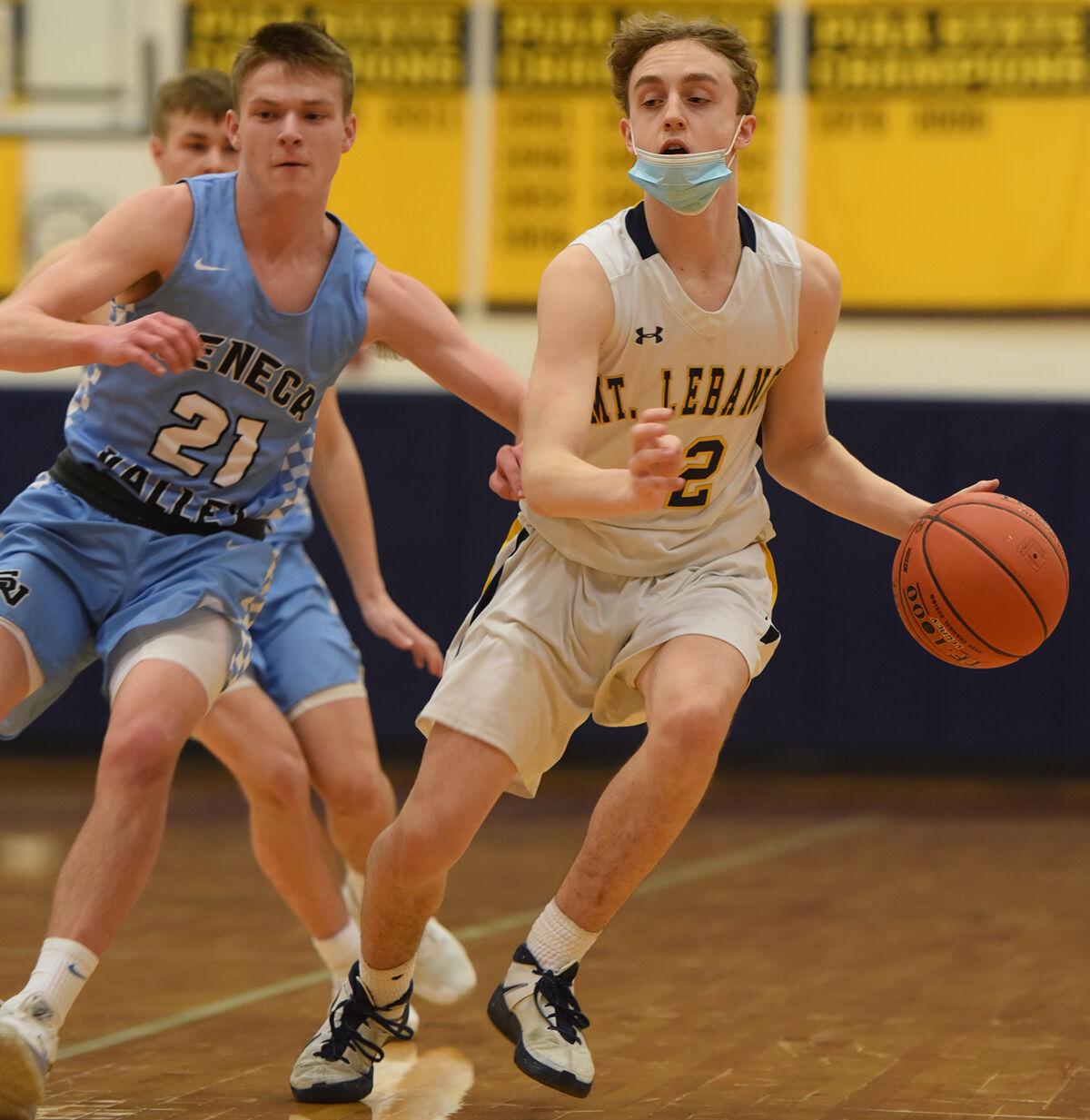 Mt. Lebanon’s Michael Pfeuffer shifts away from Seneca Valley’s Caiden Oros (21) as he drives down court during a WPIAL Class 6A playoff game.

Mt. Lebanon's Evan Sentner rises above a Seneca Valley defender and launches a shot during the Blue Devils' 72-54 loss to the Raiders.

Mt. Lebanon’s Michael Pfeuffer shifts away from Seneca Valley’s Caiden Oros (21) as he drives down court during a WPIAL Class 6A playoff game.

The Mt. Lebanon boys basketball team will not be going to the WPIAL Class 6A finals this year.

After back-to-back appearances in the WPIAL championship game, the rebuilding Blue Devils fell victim to Seneca Valley 72-54 in the first round of the playoffs.

With only three seniors on the roster, one of them a returning starter, Lebo compiled a 9-9 regular season record.

“I am really proud of these guys,” said Lebo head coach Joe David. “Only two played in the WPIAL championship. Everybody else sat in the stands and watched.”

In the final minute of their Mt. Lebanon careers, Jake Reinke and Evan Sentner sat alongside Nick Estabrook because the pair had fouled out of the contest.

Reinke finished with 10 points. He had averaged 17 points per game for the Blue Devils.

“Jake had a wonderful year. He did whatever I asked him to do. He worked hard and really improved,” David said.

“Jake was the guy last year I was worried about in the WPIAL championship. He was that tentative one that you worried about how he was going to respond. And look how much he has grown. He’s in charge, taking care of things. He’s our veteran out there now.”

Although an ankle injury reduced his role, Sentner blossomed into a leader as well. He supplied seven points in the loss to the Raiders.

“Evan said, ‘I’m fine coming off the bench.’ That’s character,” said David.”That’s a wonderful, wonderful thing that’s going to go a long way. That’s a sacrifice. Someday he’s going to have to do that for everything: his wife, his kids, his parents, his business. So he’s learning.”

Nick Estabrook embraced his role on the team, too. His work ethic endeared him to his coach.

“One of my favorites ever,” David said. “This is a kid that comes to practice every day and busts his butt. He knows the answer to every question. He plays hard.

“I tell my other players ‘Look at Nick.’ He’s not playing at all but he comes to practice with more energy and enthusiasm than anybody else on the court.”

“We played a really bad game. Our worst of the year, particularly in the second quarter,” David said. “We had opportunities and did not seize them. We did not execute. When you go down 10 at halftime against a good team that’s a tough road. We are not a juggernaut of scoring power either.”

The Blue Devils averaged 53.8 points per game and allowed opponents 51.9 during the regular season. Lebo thrived offensively on the long-range shot. Against SV, they buried a dozen 3-point field goals.

Zach D’Alessandro pitched in a pair of triples and finished with eight points. Lucas Garofoli supplied five points and Tanner Donati’s bucket cut the Raiders’ margin to 52-47 with 6:24 to play.

Lebo could draw no closer because of the consistent play of Seneca Valley’s Connor Lyczek, Cole Brooks and Caiden Oros. Lyczek exploded for 24 points, Brooks fired in 18 and Oros followed with 13.

“I have three seniors that have had really good careers. They have gold and silver medals on them,” David said. “I’m very proud of those guys. I’m happy with all my guys. I played two guys that aren’t tall enough to ride the Thunderbolt and those younger guys are out there playing and doing really well. The nice thing about sophomores, though, is they become juniors and juniors become seniors. So we are optimistic about the future.”

David was delighted the Blue Devils had a season. He noted how a year ago in mid-March the team was about to play Cheltenham in the PIAA playoffs when COVID-19 concerns canceled the remainder of the state postseason.

“The chance of not playing this year was there,” David said. “To play in this environment and through all this COVID business took a lot of resilience. So I’m proud of these players.”