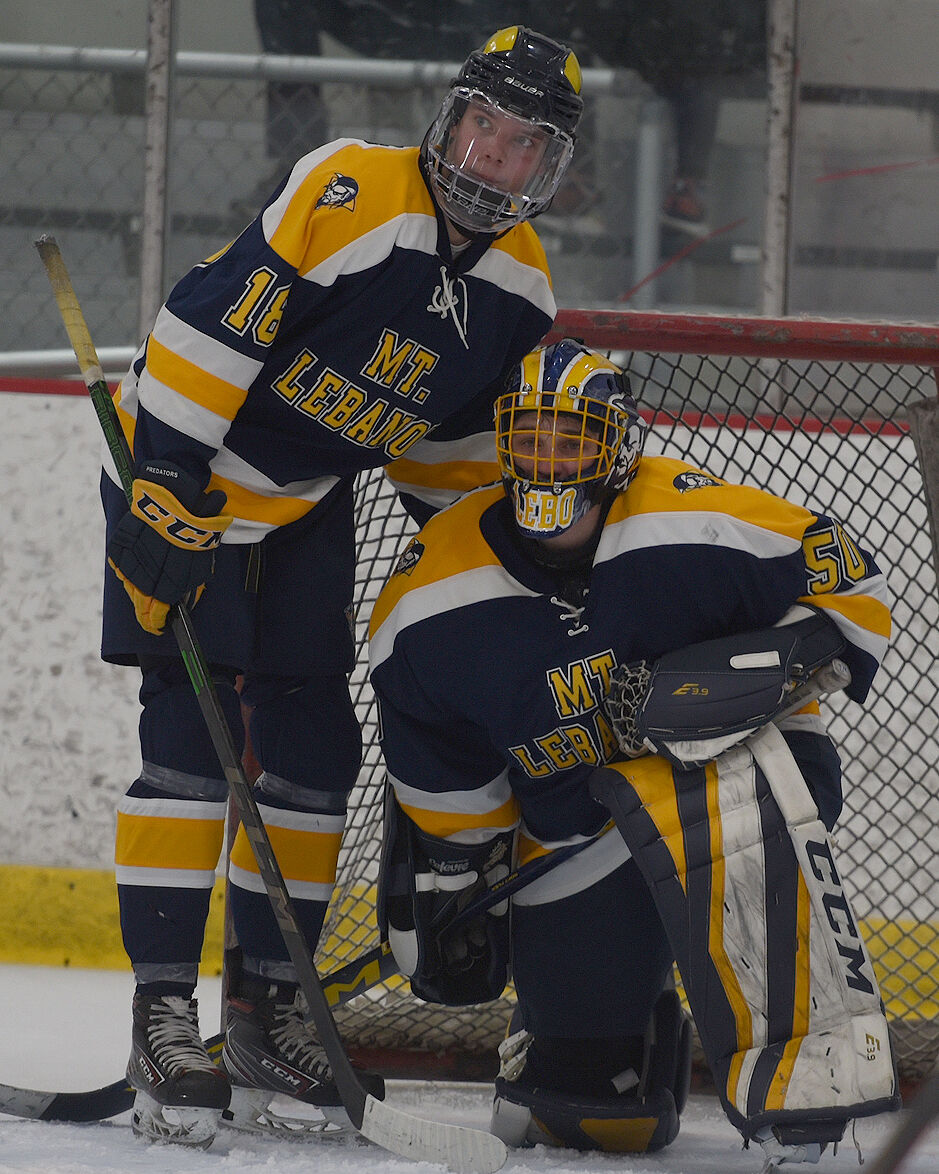 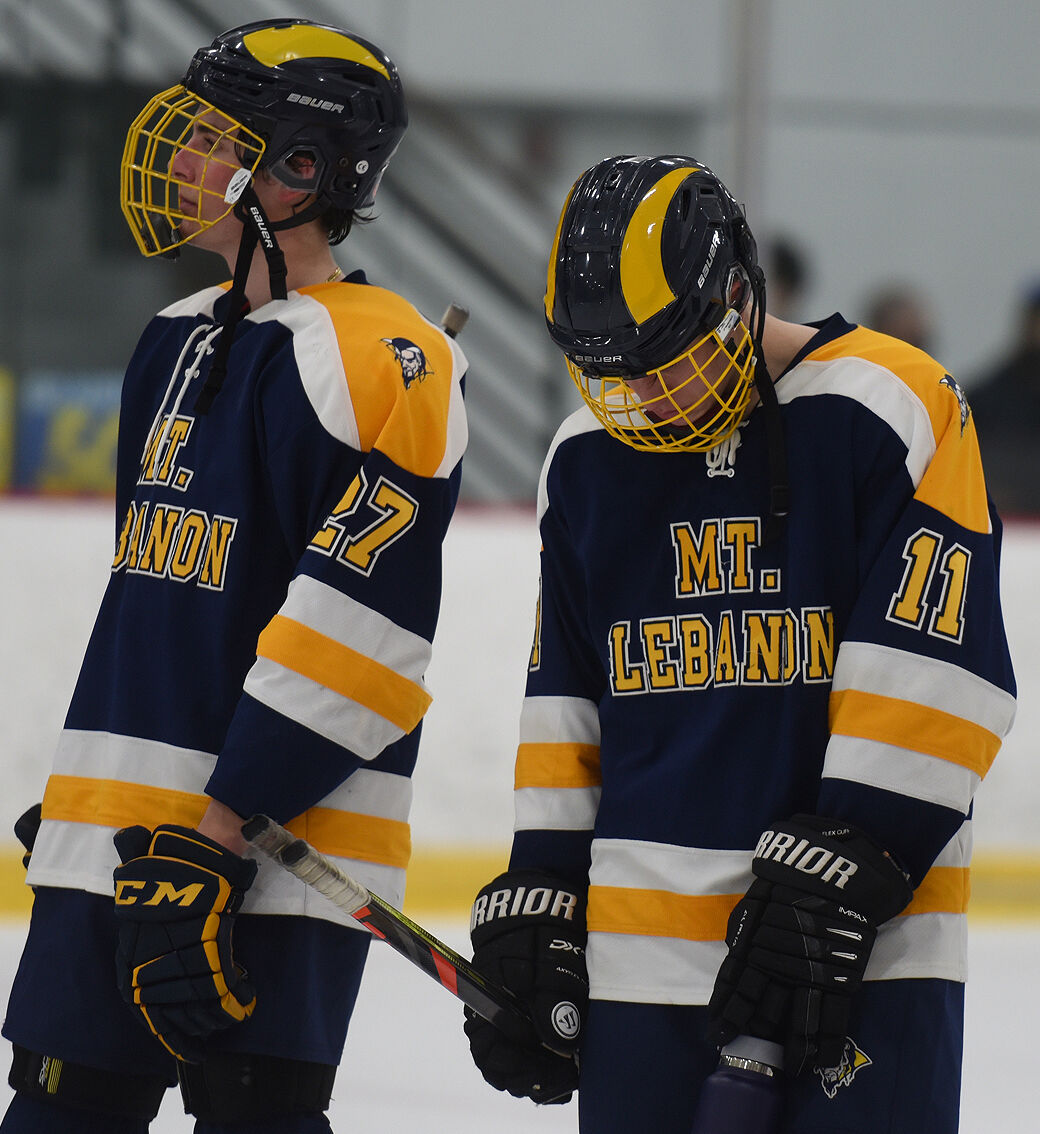 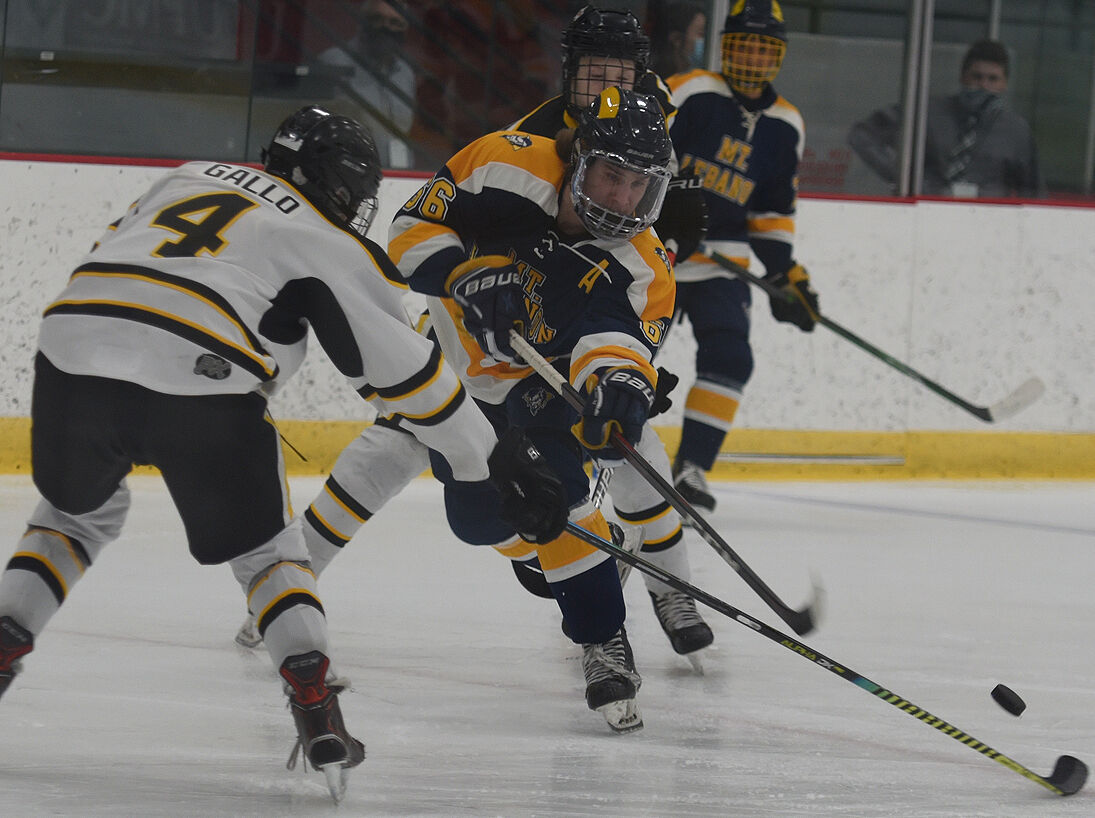 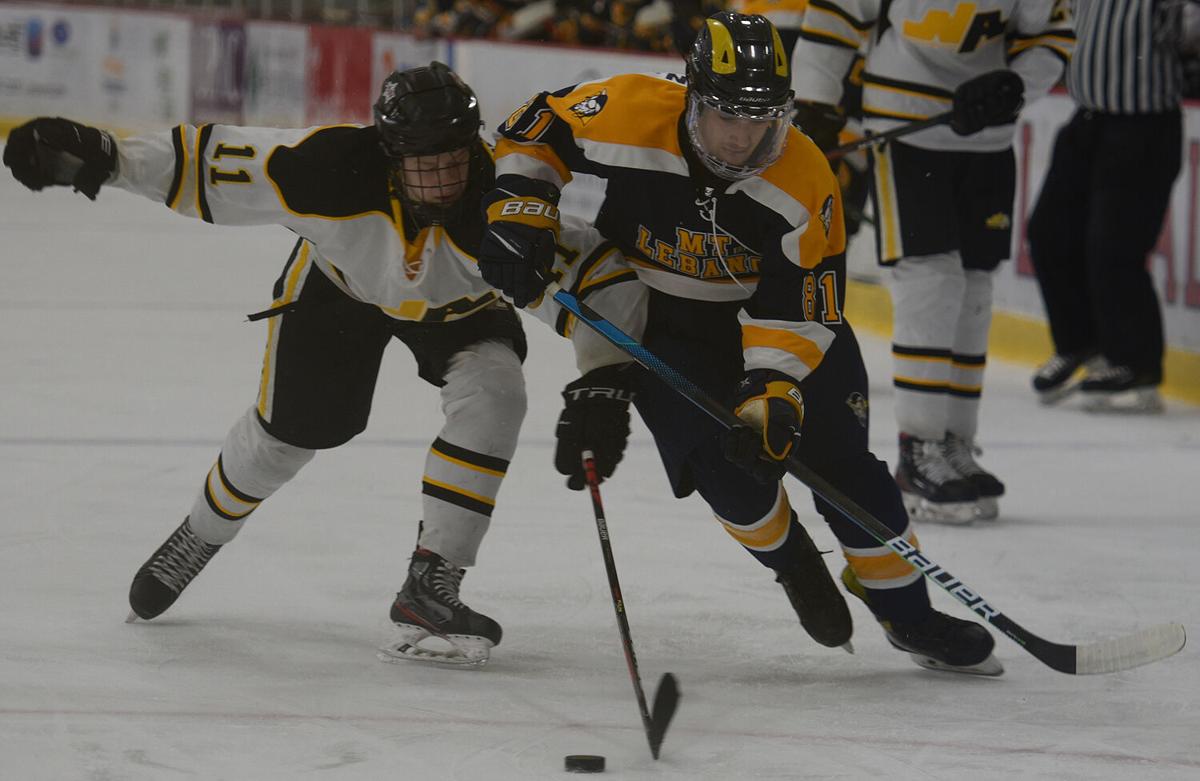 North Allegheny’s Austin Peterson, left, attempts to stop the progress of Mt. Lebanon’s Conner Ribstein as he skates down the ice on a breakaway during the PIHL Class AAA Penguins Cup game. 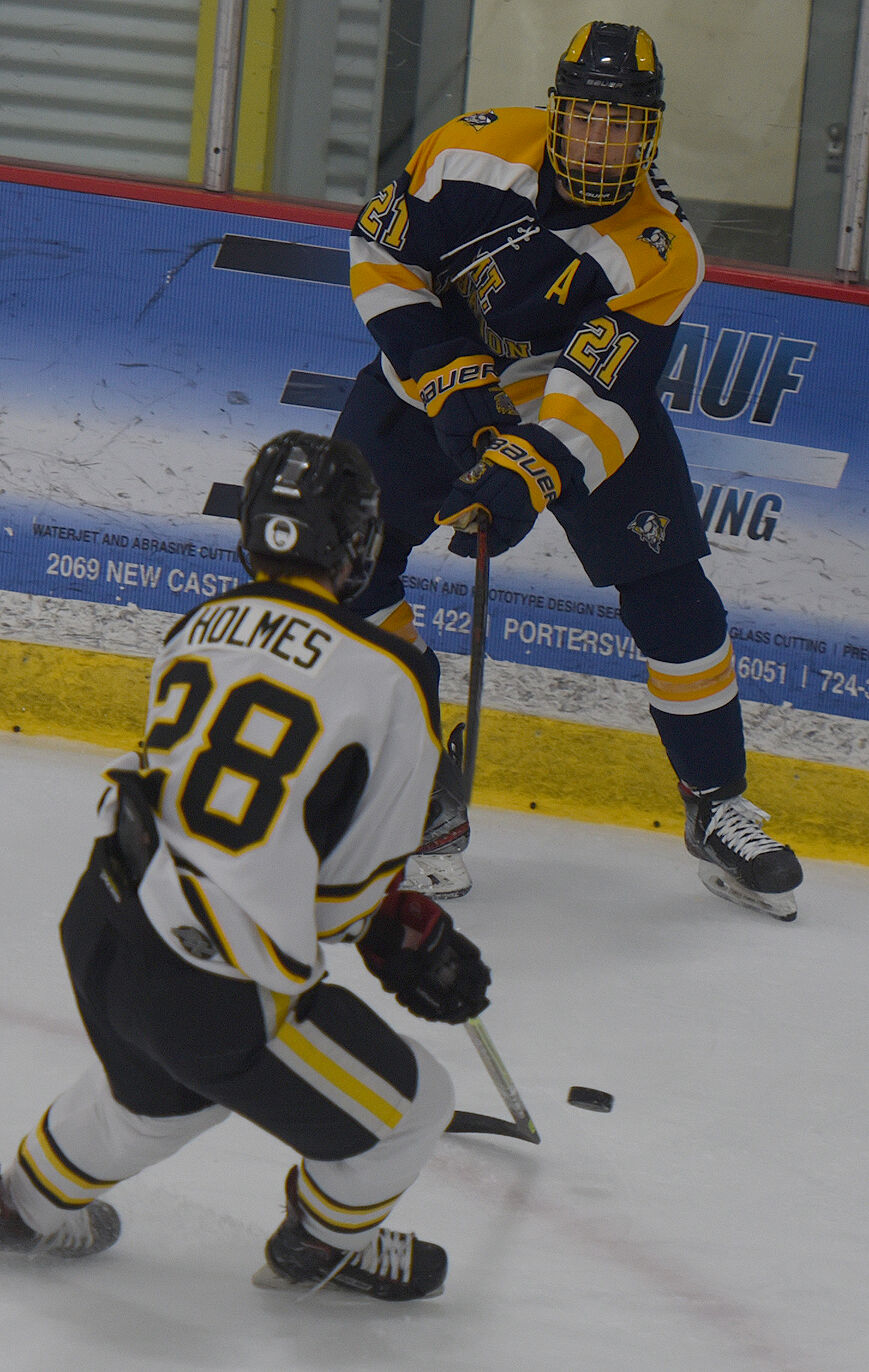 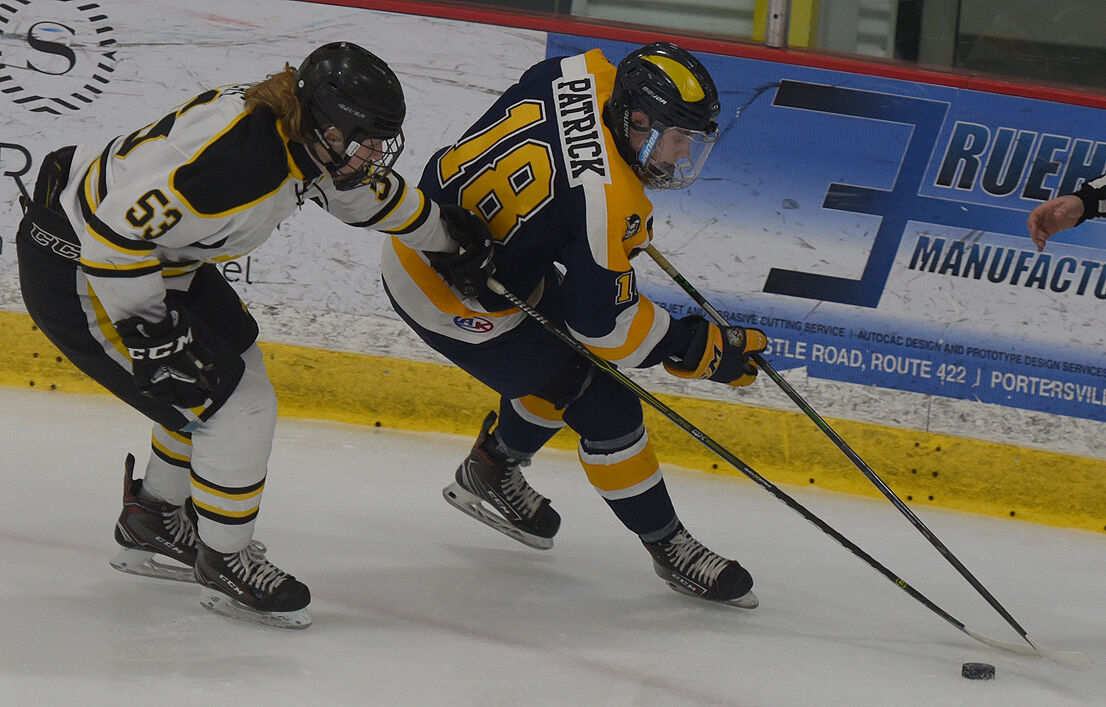 North Allegheny’s Austin Peterson, left, attempts to stop the progress of Mt. Lebanon’s Conner Ribstein as he skates down the ice on a breakaway during the PIHL Class AAA Penguins Cup game.

Mt. Lebanon had North Allegheny in the perfect spot.

Then the Tigers pounced.

NA exploded for three goals in the third period, one an empty-netter, and captured the Penguins Cup with a 4-1 victory over Lebo in the PIHL Class AAA championship game played April 19 at Robert Morris University’s Island Sports Center.

“The game was going exactly the way we wanted it to,” said Lebo head coach Jeremy Church. “We had them on the ropes. We felt like we could get this one. To their credit, NA made adjustments. They made the plays and at crunch time, in the third period, they got the win.

“Congratulations to NA. They won the game. I don’t think we lost it.”

Connor Chi scored the game-winning goal at 8:04 of the third period for the Tigers, who improved to 16-5-2 and advanced to the Pennsylvania Cup finals. Chi has scored 17 goals this season, including five in the playoffs.

“When you have arguably the best player in the league in Connor Chi, he doesn’t need too many opportunities,” Church said.

Lebo had its chances. The Blue Devils had three power-play chances but could not convert on any.

The Blue Devils managed an even-strength goal by Sam Mitchell, which was assisted by Liam Byrne, at 10:51 of the second period.

Church blamed his team’s failure to produce on the power plays on himself.

“I should have had them better prepared, maybe worked on the power play a little bit more because in games like this, it can be a huge difference and it was,” he said.

The Tigers scored on a 3-on-1 in the first period. Nathan Spak scored off an assist from Austin Peterson for the first score of the game at 3:40.

Peterson tacked on an insurance goal for the Tigers at 13:56 of the third period. Speak and Matt Irvin assisted on the goal.

NA added an empty-net goal credited to Trey Gallo from Josh Bailey, who turned away 33 of 34 shots on goal by the Blue Devils for a .971 save percentage.

Lebo, however, was the team that mounted a resurgence when left for dead after a 1-8 start. The Blue Devils won six of their last seven games and earned the No. 7 seed in the PIHL playoffs.

Lebo upset No. 2 seed Canon-McMillan and No. 3 Pine-Richland to reach the Class AAA showdown with NA, a team it lost to 3-2 after 13 rounds of a shootout March 29.

The title-game loss against the Tigers was Lebo’s first in regulation in seven weeks.

“I don’t care at what level you are playing, when you go almost two months without losing a game, you are doing something special,” Church said. “So all the credit is to these players. They left everything they had out there on the ice.

Church said his team never viewed itself as underdogs.

“We did not view ourselves as a Cinderella story,” he said. “We felt if we played the way that we are capable of playing this is the level that we can play at.

Among the returning starters is goalie Austin Martin. The sophomore faced 17 shots on goal against the Tigers.

Mitchell and Bryne also return for the Blue Devils.

“Sure we have a lot of guys back but you never know how many bites of the apple you are going to get,” he said. “A lot of teams in the league have guys back. So when you get here, you want to try and win.”