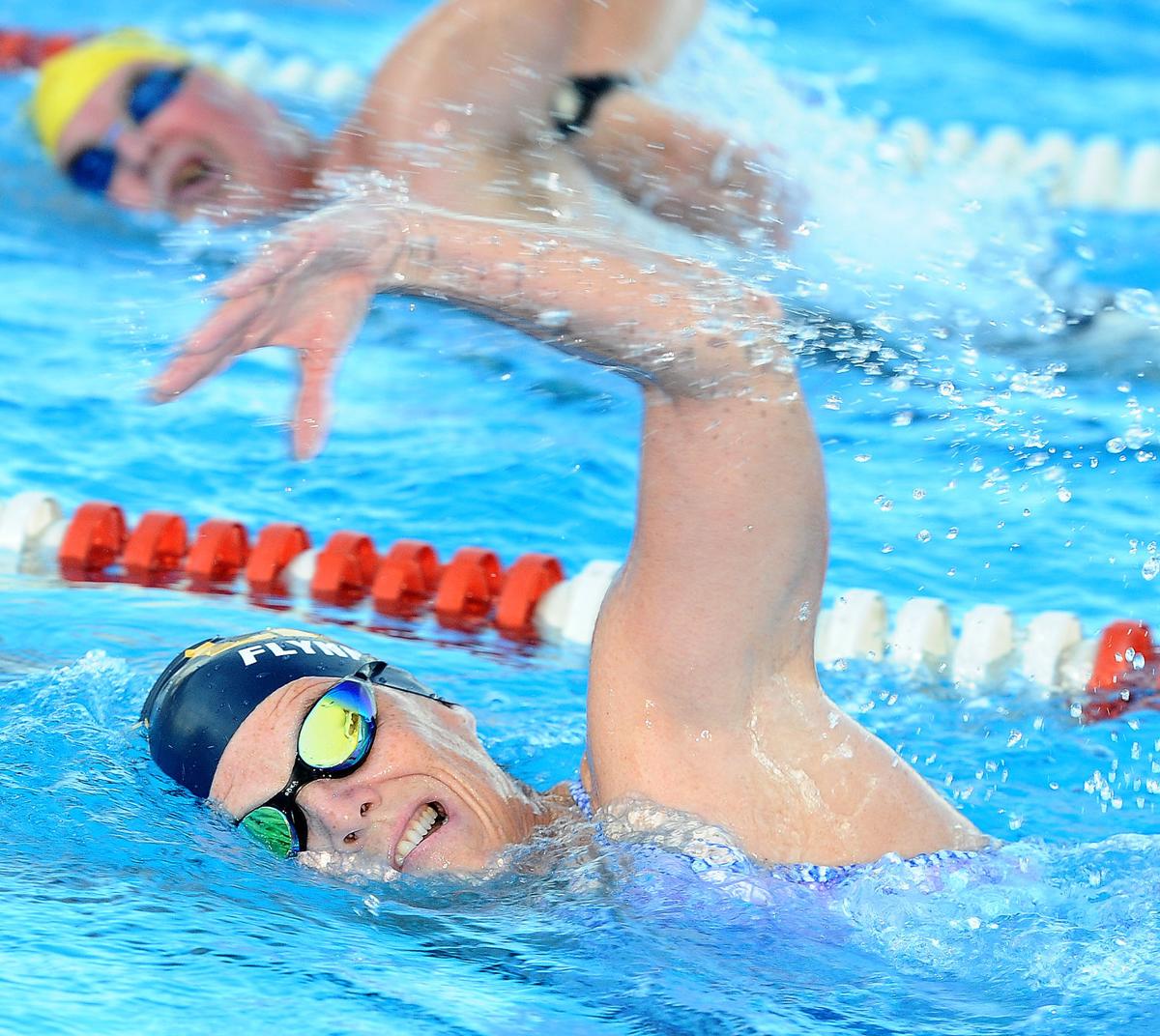 Judy Caves is no “Goldilocks” when it comes to water temperatures for swimming. Fifty-seven degrees is not too cold. Eighty is not too hot.

Everything is just right, particularly in the age of COVID-19.

During the recent quarantine aimed at tamping down the spread of the virus, Caves had no pool in which to train. In mid-May as sanctions were lifting, the Mt. Lebanon resident took to the open waters.

After her first dip, Caves collapsed, but not from the chill of the muddy Monongahela River waters.

“I started crying,” she said. “I was back in my happy place. This is such an outlet for me, part of me, good for the soul. When I’m swimming, I feel like I’m in control of something.”

While she is unable to manage the thermostat at South Hills Country Club, Caves is back in familiar surroundings as she prepares for her next big swim in September. Caves is a member of Mt. Lebanon Aqua Club’s masters swimming program and the group has commenced morning workouts at the facility, located in Whitehall.

“I prefer it cooler. The 70s is more comfortable, but I understand the country club concept,” Caves said of the pool’s warm waters. “I am not complaining. I am just so happy to be back in the water. For me, swimming is so soul satisfying. When I’m in the water, the rest of the world goes away and I’m in a good place.”

She started at Keystone Oaks High School and captained the Golden Eagles her senior season. She anchored the team’s 4x100-meter relay that competed in the WPIAL championships. Caves then swam on the men’s team at Bethany College because the school had no female team. She helped the Bisons score points in their Presidents Athletic Conference meets against Grove City, Gannon, Mercyhurst, Hiram and Westminster.

Caves, who majored in communications, stopped swimming for a time to pursue a career in advertising and public relations. After stints selling ads for WKFM and a position as associate director of admissions at Carnegie Mellon University, she earned a masters degree in education from University of Pittsburgh. Caves then embarked on a career as a guidance counselor at Seton LaSalle High School.

In the interim, Caves married her husband, Norman, raised two boys – Sam, 26, and Keith, 24 – and learned about masters swim programs at Pitt and Mt. Lebanon. Within three years, she completed her first long-distance swim – a two-mile trek through Porter’s Cove at Lake Arthur in Moraine State Park.

Caves has since finished a four-mile swim in the Chesapeake Bay and covered six miles in Lake Michigan. She completed a 12.5-mile event in Charleston, S.C., as well as a 28.5-mile New York open water swim event that circled around Manhattan.

After back-to-back marathon swims that measured 19.8 and 13.2 miles, Caves entered the Border Buster, a 25-kilometer open-water swim meandering through glacier-fed Lake Memphremagog between Newport, Vt., and Magog, Quebec. She also participated in the 8 Bridges Hudson River Swim in New York.

After a race, Caves said her “endorphins are so happy” she comes out of the water wondering what she can do next.

This summer, she wanted to complete the SCAR Swim. The four-day event covers four lakes and roughly 40 miles of secluded water in the rugged wilds of Arizona.

“It was canceled,” she said sadly. “It was going to be my big trip, but fortunately I hadn’t book anything.”

There are no events booked on the schedule this summer. Caves knows of only one event – a 30-mile swim in Pittsburgh – tentatively set for September.

However, right now, she’s just pleased to be swimming in a real pool.

During the pandemic, she participated in online workouts. These 40-minute sessions were led by a marathon swimmer. She also said she walked up to five miles a day and bought TRX suspension straps and cords to work on upper body strength so as not to lose the muscle power in her shoulders.

Caves said she was delighted when she did finally get into the water she was able to do a two-mile swim. In three weeks, she’s already up to six miles.

“Open water is so much different than swimming in a pool, but I think in two months I’ll be back,” she said. “I have a good foundation. I feel like today I could swim for miles.”

For Caves, it’s all in the mind. So is handling the concerns caused by the pandemic.

“I have to concentrate,” she said. “It takes complete focus.

“At the beginning of all of this, I was worried. There were mixed messages and I became more confused. I’m a worrier at heart, but also a planner. I like to be in control. This really threw me off my game, but now I feel I am in a better place. I credit swimming. My mental state is better because of swimming.”