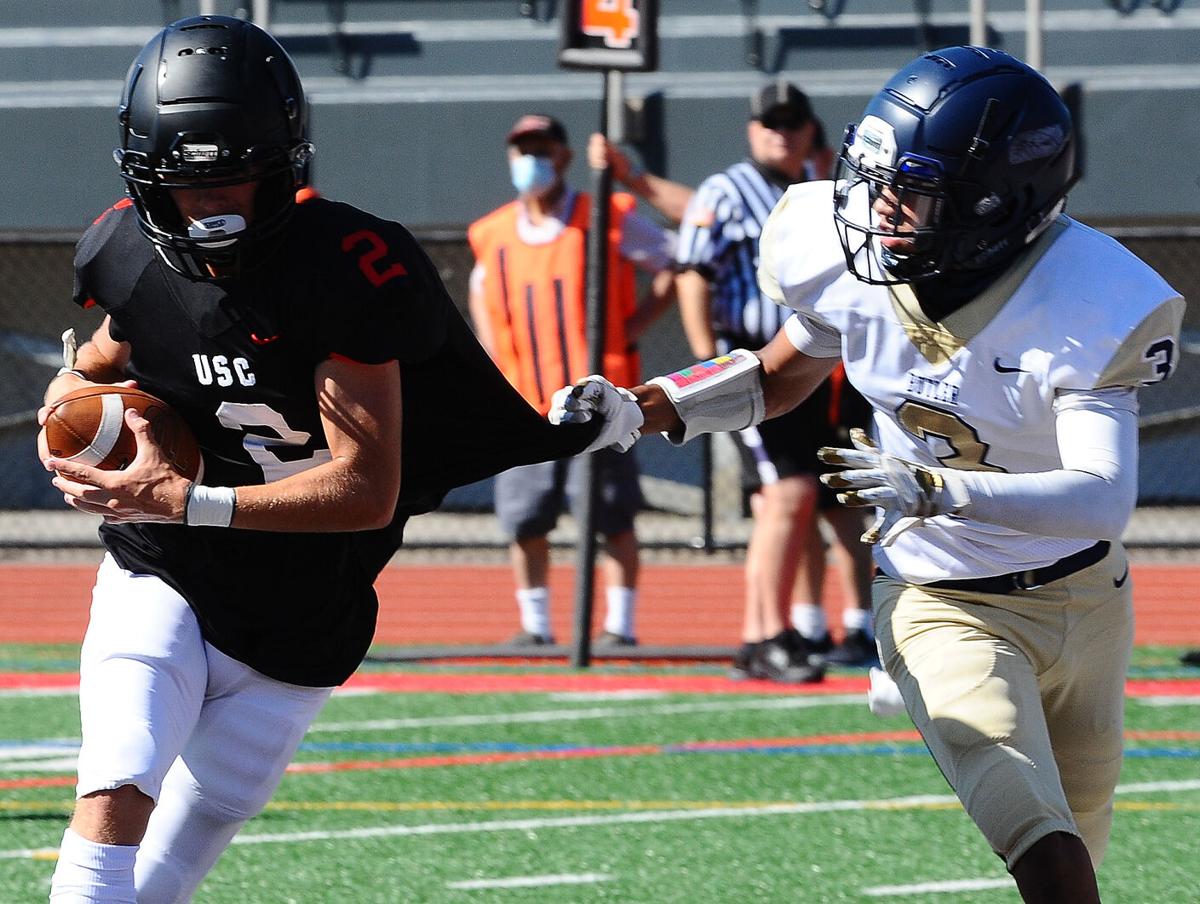 Upper St. Clair’s Mateo Cepullio hauls in a touchdown reception during a preseason scrimmage against Butler. 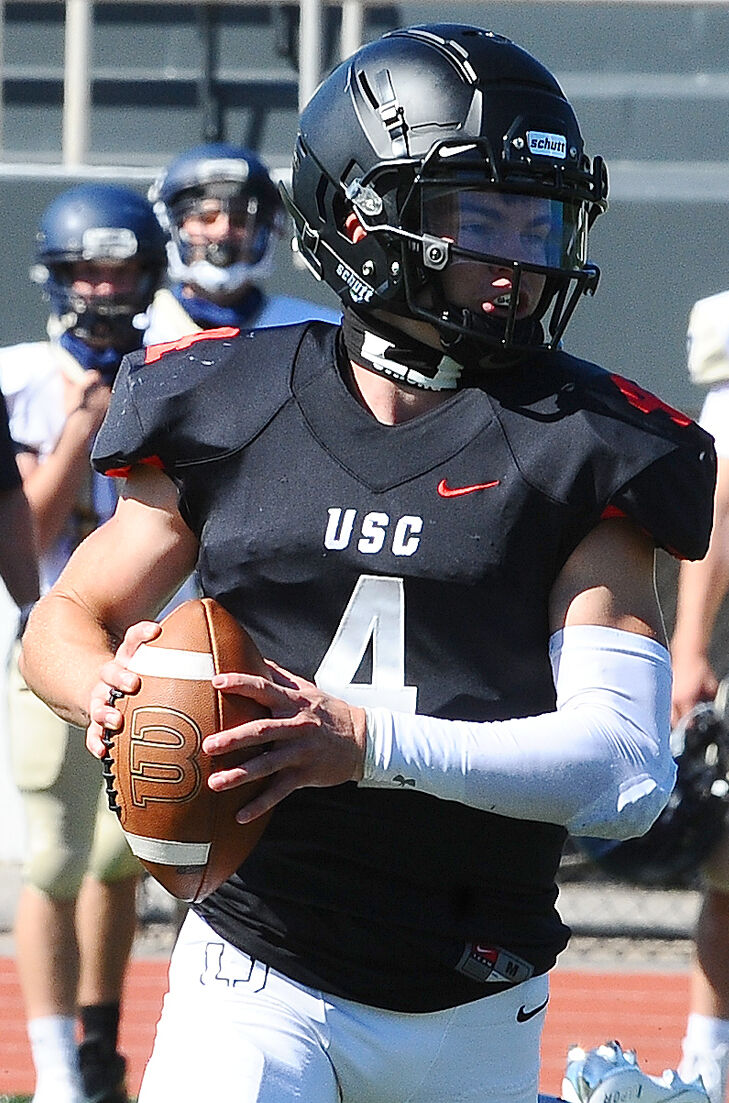 Upper St. Clair’s Mateo Cepullio hauls in a touchdown reception during a preseason scrimmage against Butler.

Mt. Lebanon is finally ready for some football following an interruption to its training camp because of a positive coronavirus test for one of its players.

The Blue Devils will travel to face Canon-McMillan at 7 p.m. Sept. 18 in their Quad County Conference opener.

“I am so happy these kids finally get an opportunity to play,” said Lebo coach Bob Palko. “They have done a really good job during these different times.”

Lebo had to cancel a preseason scrimmage with rival Upper St. Clair and postpone its Sept. 11 home opener against Baldwin in order to meet the requirement for 15 training sessions, including heat acclimatization, following the player’s positive coronavirus diagnosis.

“On their own, the kids have prepared themselves as well as they could have and when we have gotten together, they have been very productive,” Palko said. “Whether that measures up to wins or losses, there are no guarantees.

Regardless, Palko also said he was proud of his players.

An offensive tackle and defensive end, McMahon is also a capable receiver. He caught 12 passes last year as a tight end.

Angott rushed for 896 yards and had 15 receptions. The tailback also scored eight touchdowns.

“To be able to have a season when so much has been taken away from you because of the (COVID-19) situation, makes you just happy to get an opportunity to play” Palko said. “We are just so grateful and blessed to be in this situation. I’m just happy we will get to represent Mt. Lebanon and help these young men attain what they want to attain.”

While Bethel Park and Upper St. Clair are fresh off their Allegheny Six Conference opener, both teams have intriguing match-ups against formidable opponents in Week 2.

The Black Hawks visit Gateway and the Panthers host Pine-Richland. The Gators and Rams are expected to contend for the WPIAL Class 5A championship.

Gateway is the defending WPIAL champion and has won two titles in the past three seasons. They finished 12-3 overall after falling to Archbishop Wood, 24-21, in last year’s PIAA semifinals.

Gateway’s Derrick Davis is considered one of the top players in the WPIAL and has three dozen Division I offers. A two-way standout at running back and defensive back for the Gators, he has rushed 3,151 career yards and has 91 receptions.

“Gateway is extremely talented and well-coached,” said BP coach Brian DeLallo. “There are a lot of well-coached programs in the WPIAL. There are a lot with great talent. There are few with the combination of talent and coaching that Gateway has. They bring back a bunch of guys from their WPIAL Championship team of a year ago, so it will be a great challenge for us.”

Pine-Richland dominated the WPIAL’s largest classification before bumping down to Class 5A to compete in the Northeast Conference this season. Since 2014, the Rams have amassed a 71-13 record and collected three conference titles, two WPIAL titles and a PIAA title. The Rams finished 10-2 last season, falling to Central Catholic 10-7 in the WPIAL championship game at Heinz Field.

“A big part of building a successful program is measuring yourself against the best that the WPIAL has to offer,” said USC head coach Mike Junko. “You can not find a more complete opponent on the 5A or 6A level than Pine-Richland. They are well coached and have a number of Division I prospects on their roster.”

The Rams start with Cole Spencer. A Penn wrestling recruit, he threw for 2,994 yards and 36 touchdowns.

Spencer’s top target is Eli Jochem. The senior wide receiver and safety ranked third in the WPIAL in receiving. He caught 71 passes for 1,065 yards and scored 14 touchdowns.

With returning starters Harrison Hayes and John Swisher at tackle, Miguel Jackson at guard and Luke Miller at tight end, Spencer has plenty of protection. Hayes and Jackson, who has 24 sacks in two years, are Liberty recruits while Miller is a Kent State commit.

“Pine presents a number of challenging match ups and do an excellent job of isolating their athletes in spacer,” Junko said. “We must play a sound game and limit our mistakes. They feed off of turnovers and big plays.

After a trip to Ohio to face Dover in its season opener, South Fayette will reduce its travel time when the Lions visit Chartiers Valley.

The Colts have dropped down a classification and are competing in Parkway Conference of Class 4A.

The Lions’ offense boasts a wide array of talent in quarterback Naman Alemada, who threw for 3,004 yards and 34 TDs last season and receivers Charley Rossi, who had 53 catches for 816 yards, Joey Audia, who had 57 catches for 736 yards, Ryan McGuire, who had 34 catches for 778 yards, and tight end Ryan O’Hair.

The Colts are anxious to demonstrate their improvement as junior quarterback Anthony Mackey returns to run the offense.

Socrates Boulis is also a force on both sides of the ball and a versatile threat to run or catch the ball.

Peters Township is scheduled to host Penn-Trafford. The Warriors lost to the Indians in the WPIAL semifinals and ended their 2019 campaign at 11-2.

While the Indians are familiar with the Warriors, they will need to adjust to a change in position to one of their most formidable players.