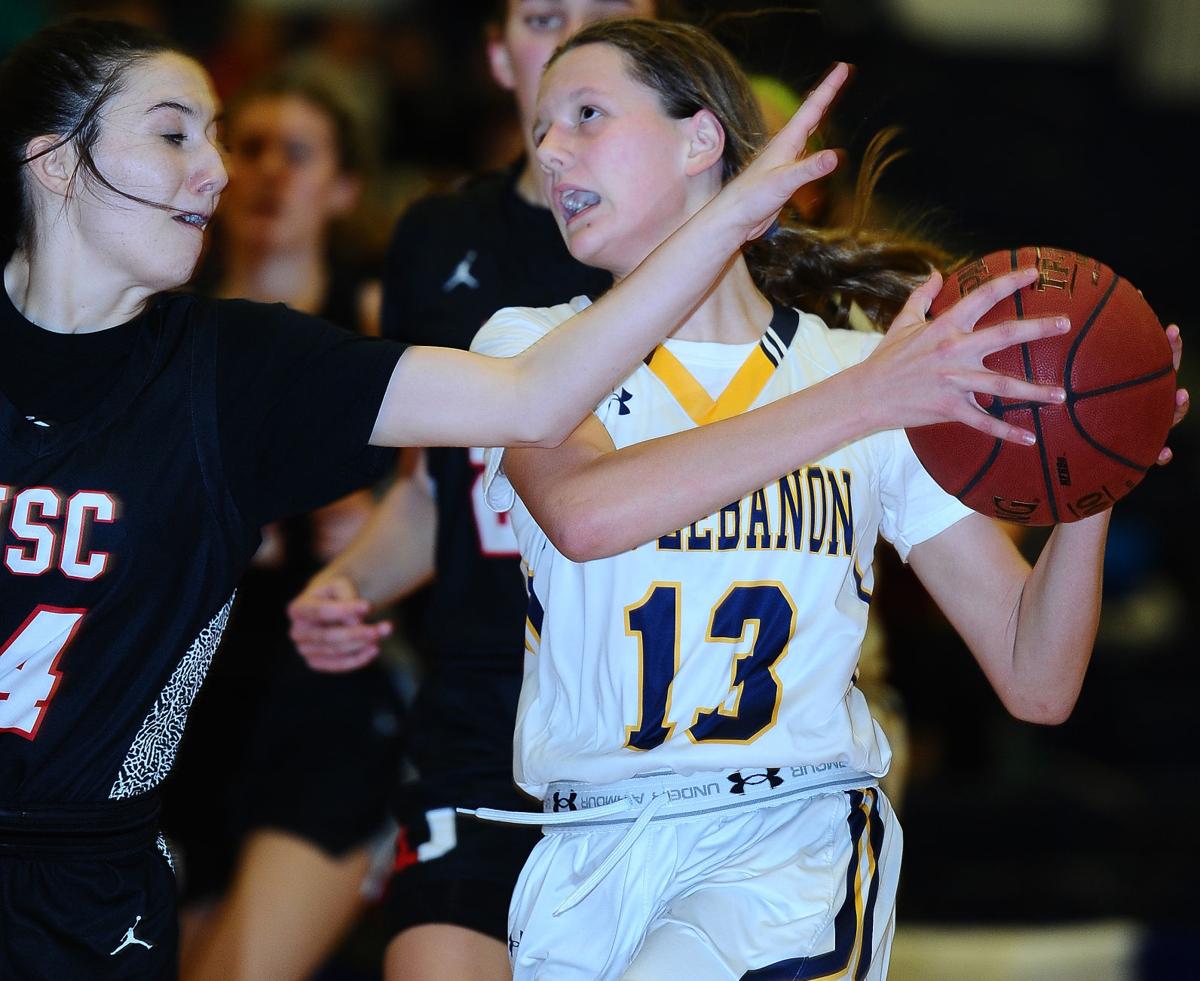 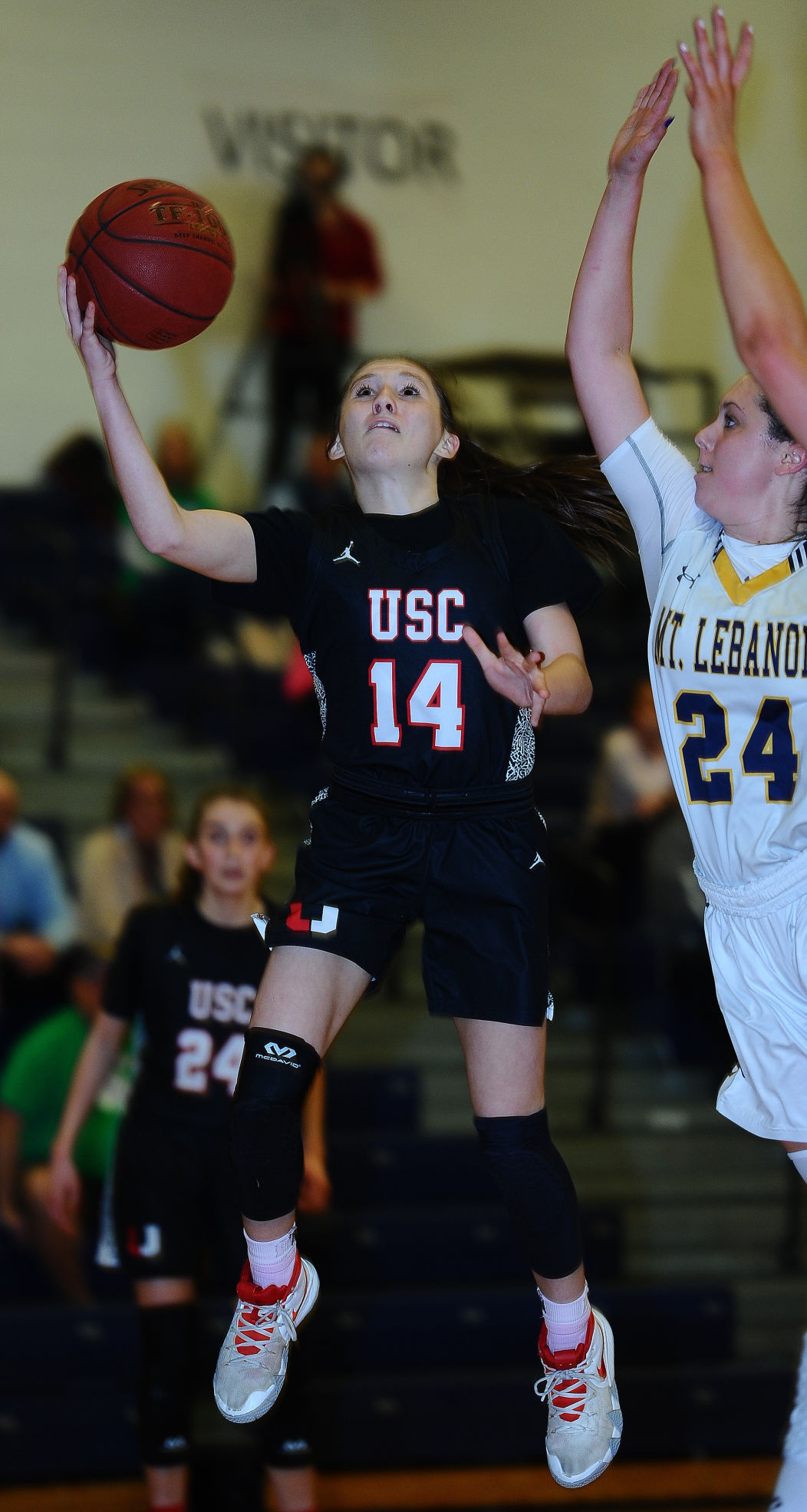 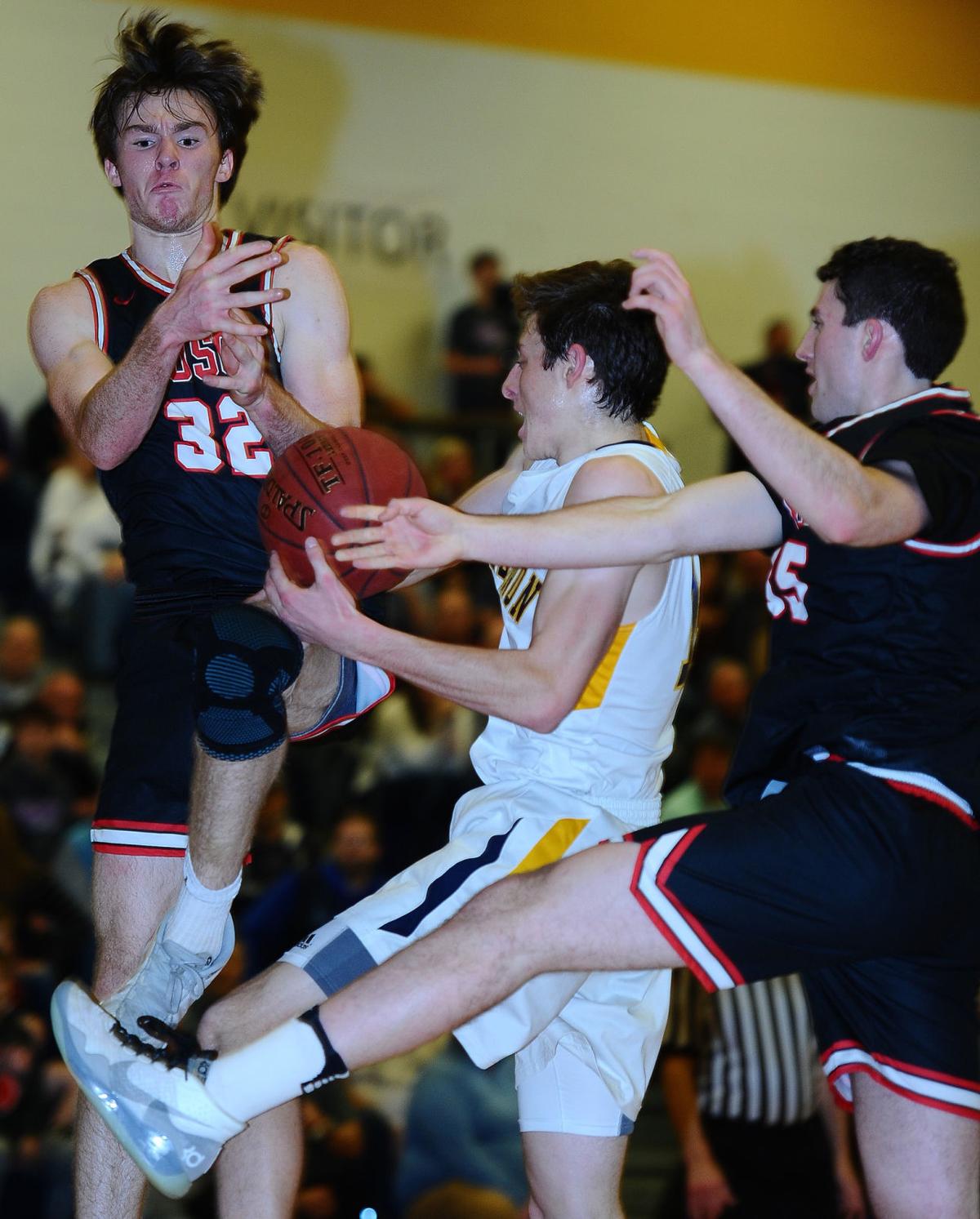 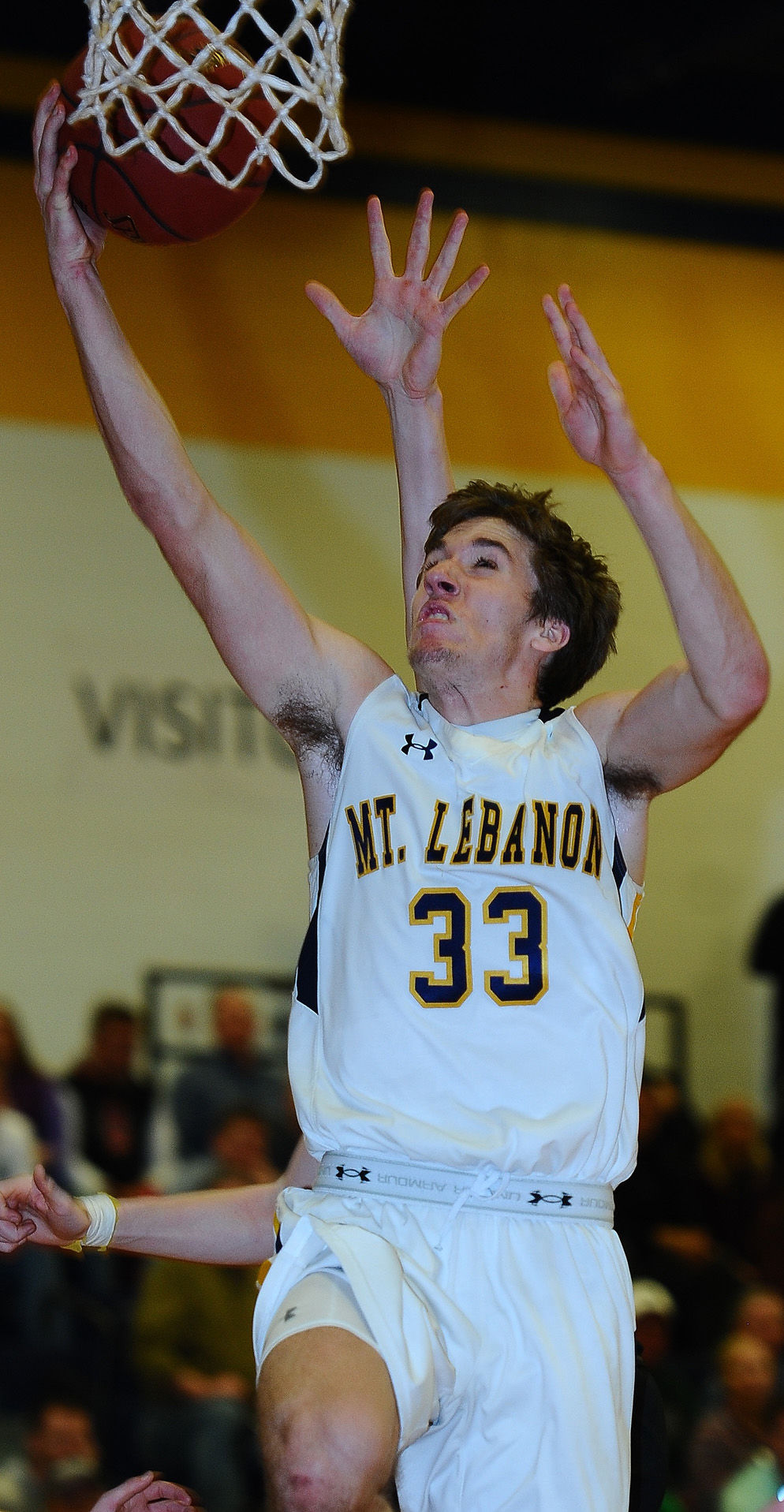 Jake Hoffman skies to the basket for two. The senior fired in 21 points in leading Mt. Lebanon to victory, 63-56, against Upper St. Clair. With the win, the Blue Devils completed first-half of section play undefeated. 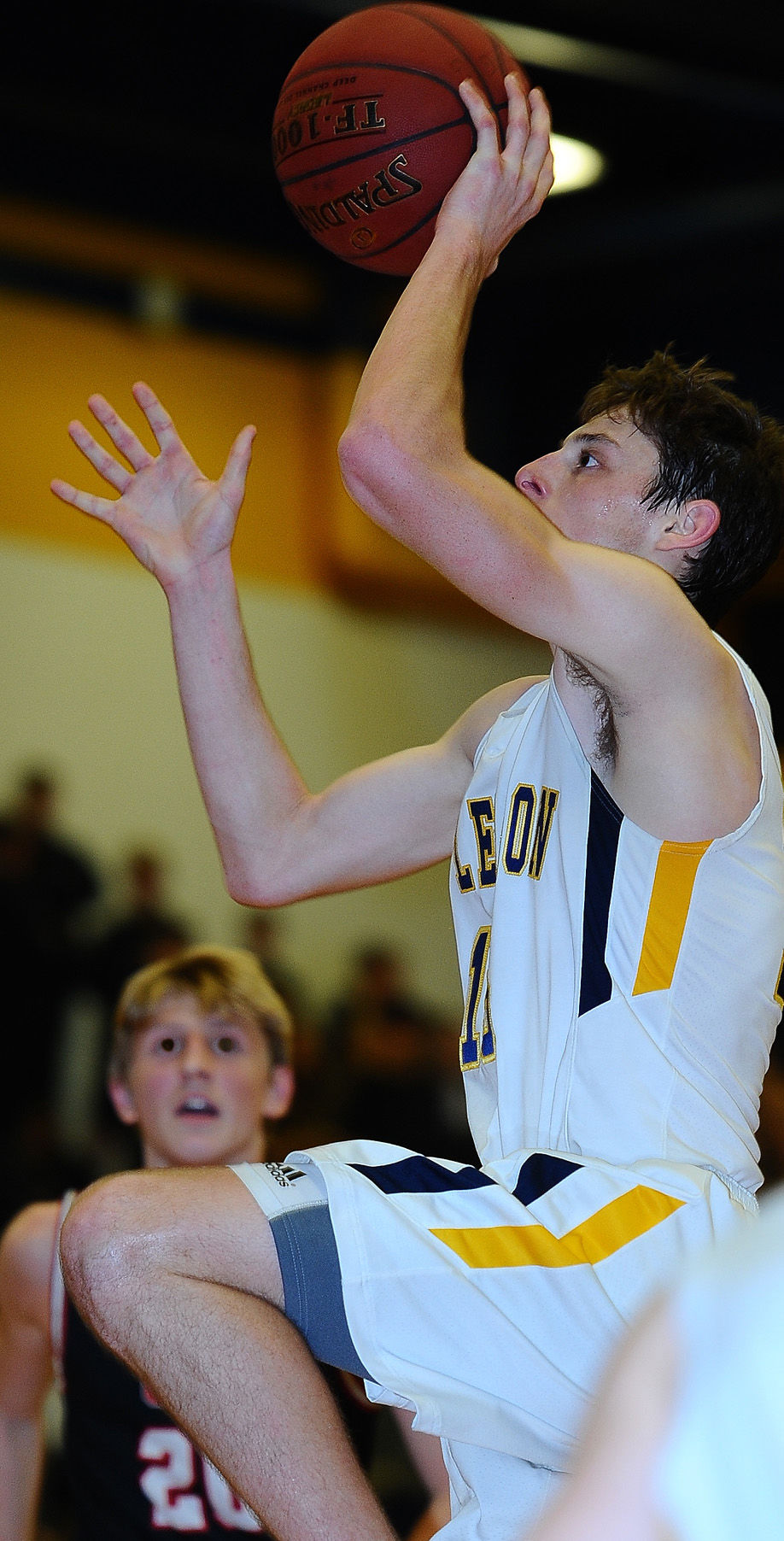 Joey King soars to the basket during Mt. Lebanon's 63-56 victory against Upper St. Clair. King tossed in 14 points in the victory. 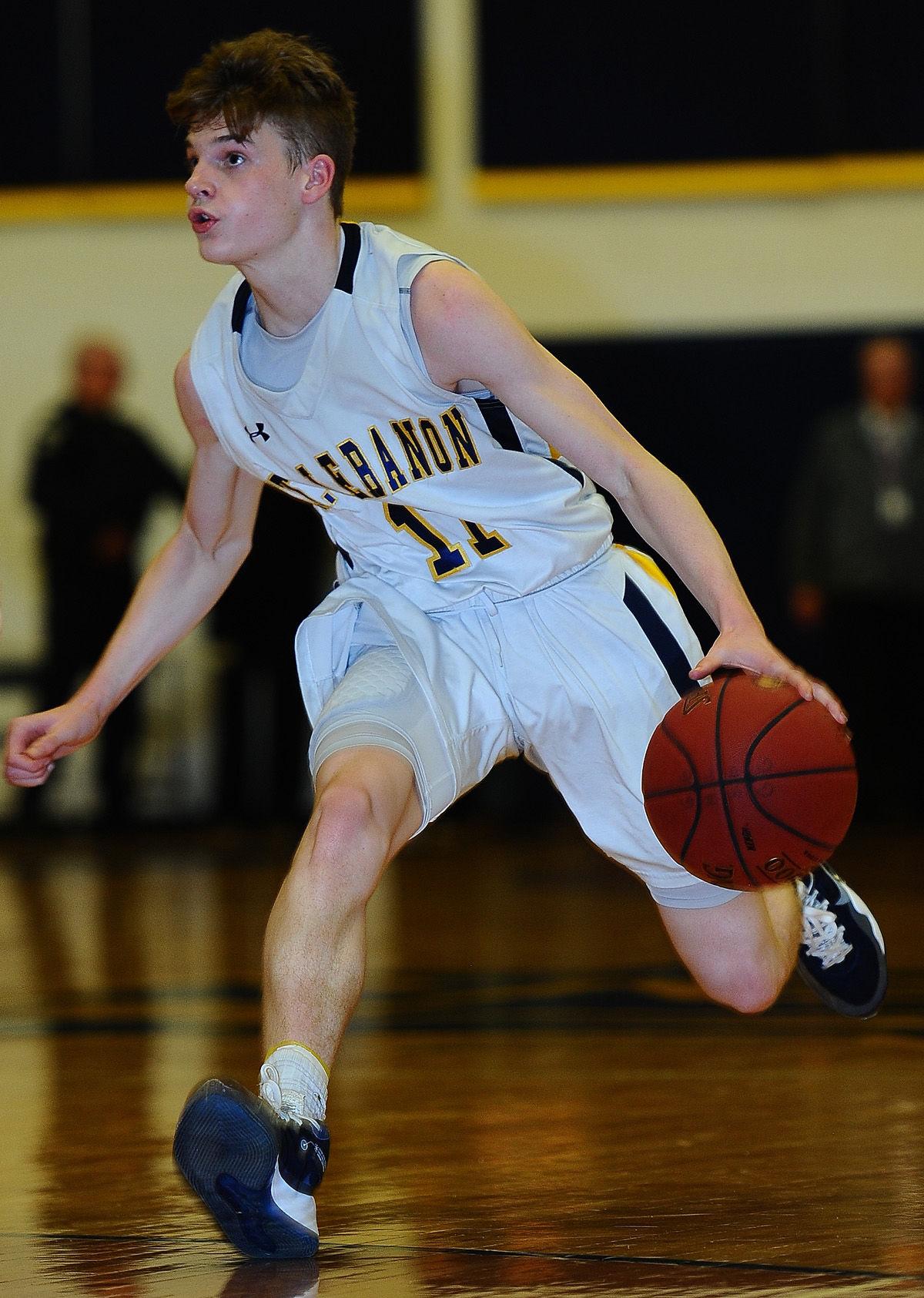 Jake Hoffman skies to the basket for two. The senior fired in 21 points in leading Mt. Lebanon to victory, 63-56, against Upper St. Clair. With the win, the Blue Devils completed first-half of section play undefeated.

Joey King soars to the basket during Mt. Lebanon's 63-56 victory against Upper St. Clair. King tossed in 14 points in the victory.

With their 63-56 victory, the boys team moved into sole possession of first place at the halfway point of their Section 2, 6A schedule. The Blue Devils, who stretched their winning streak to five games, improved to 11-3 overall and 5-0 in the division.

The victory also snapped USC’s 10-game winning streak and served as a bit of payback over the Panthers who thumped the Blue Devils, 71-45, on their senior night last year. USC slipped to 12-2 overall and 4-1 in the league.

“The last time we played them was a real tough one for us, so going in we had the guys rally,” Hoffman said. “We knew this was a huge one for us. We knew we had to come out with that energy.”

The Blue Devils certainly did. Hoffman scored 10 of his team-high 21 points in a first quarter that saw Lebo mount a 21-20 advantage.

Though USC crawled back into the contest on 3-pointers from Luke Gensler and Andrew Casey and with baskets from Luke Banbury and Zack Kingseed, Lebo surged to a 31-24 halftime advantage. The Blue Devils were led by some nifty passing from point guard Blaine Gartley and production from Joey King, who finished with 14 rebounds, 8 in the first half.

“Our energy and the fact that we are really playing as a team,” Hoffman said were the keys to Lebo’s success. “We’re really sharing the ball and gained controlled over the game.”

The Blue Devils maintained control stretching their 33-26 advantage to 43-34 on a 3-pointer from Evan Sentner. Jake Reinke’s hoop at the buzzer made it 47-35 heading into the final quarter.

USC’s David Pantelis did not play against Lebo because of a high-ankle sprain. Meanwhile Josh Russell, one of the team’s scoring leaders, is lost for the season because of a broken foot.

USC’s five other starters have picked up the pace against Lebo. Gensler buried five 3-pointers and finished with 22 points. Landon Rauch pitched in 13 points while Kingseed and Casey followed with 10 and nine, respectively.

Against the Black Hawks, Gensler exploded for 23 points while Banbury and Ethan Dahlem added 12 and 11 points, respectively.

Ryan Meis finished with 24 for BP, which improved to 3-2 in section and 8-6 overall after beating Baldwin, 83-57. Tommy DiRienzo scored a game-high 30 points, while Meis added 28.

Sam Petrarca and Colin Cote led the Indians with 17 and 10 points, respectively.

The Lebo girls team scored USC, 47-42, and finished the first round of section action with a 6-1 record, one game behind unbeaten Bethel Park. The teams meet Jan. 23 at Lebo.

With the game deadlocked at 18 midway through the second quarter, Lebo stormed ahead by reeling off 12 unanswered points. Buckets by Palmer, Murdoch and Brooke Collins lifted the Blue Devils to a 30-18 edge to start the second half.

Ava Keating tossed in 19 points for the Panthers, who slipped to 5-3 in the division and 8-4 overall.

In other action, Peters Township defeated the Big Macs, 64-26.