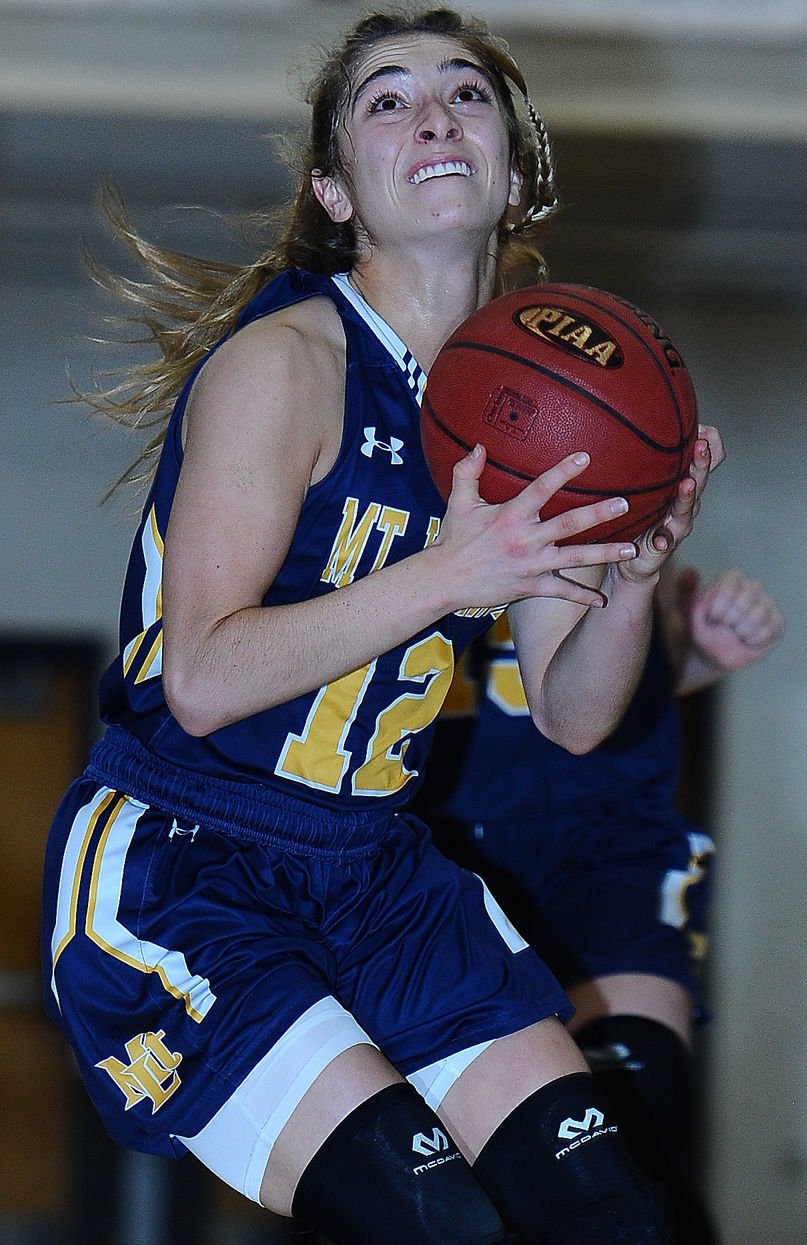 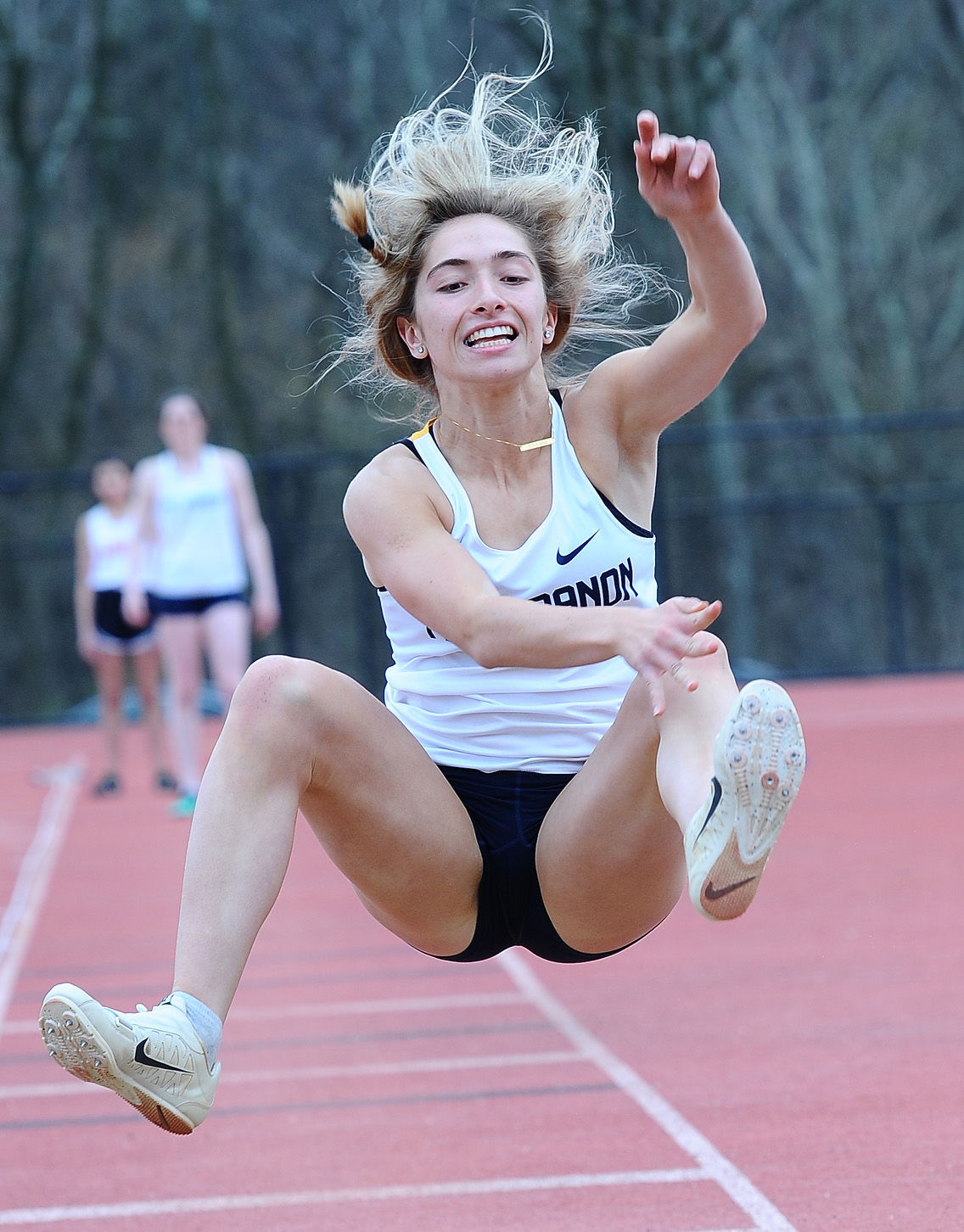 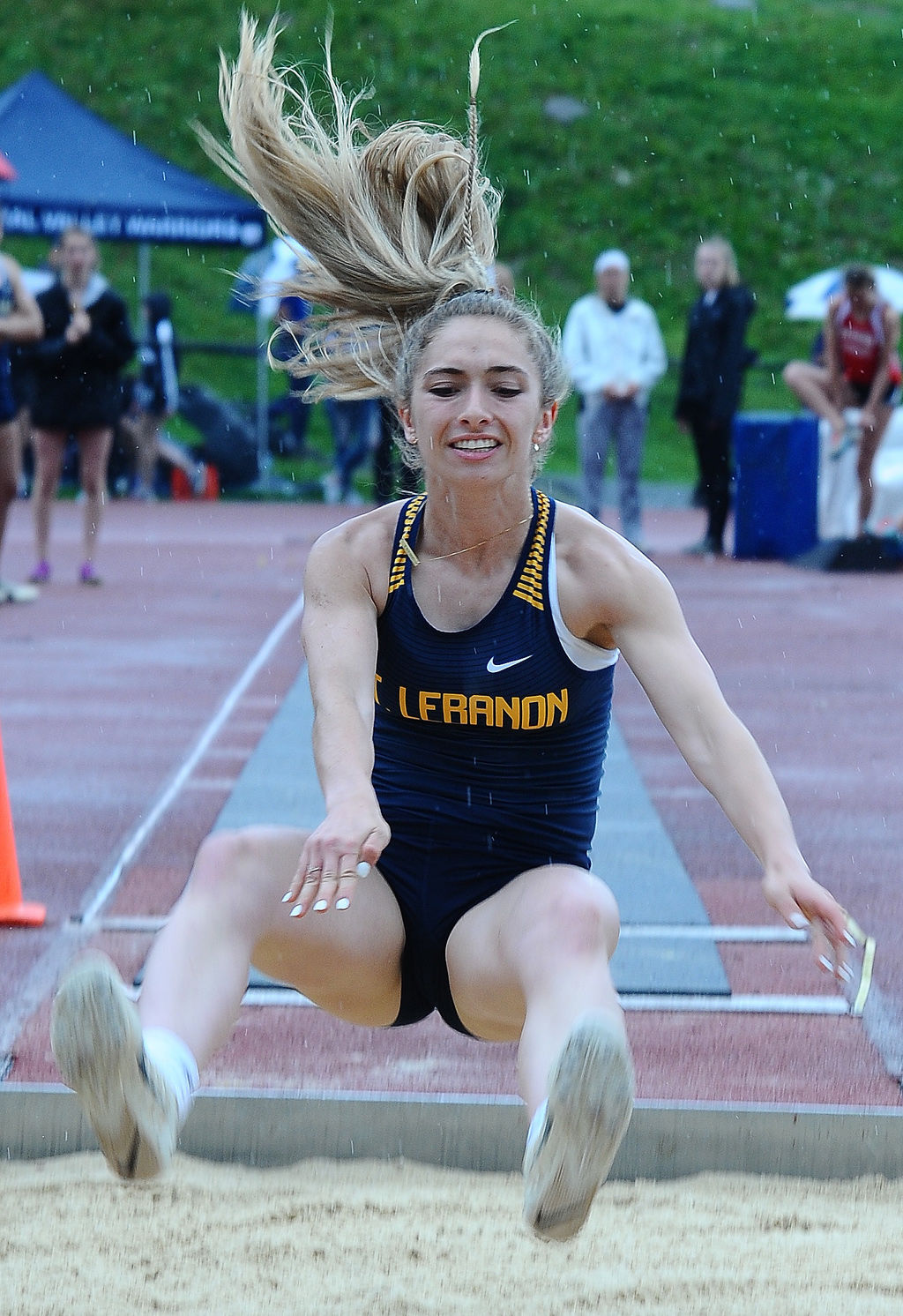 Patrice Smith completes one of her jumps during the 2019 Baldwin Invitational. 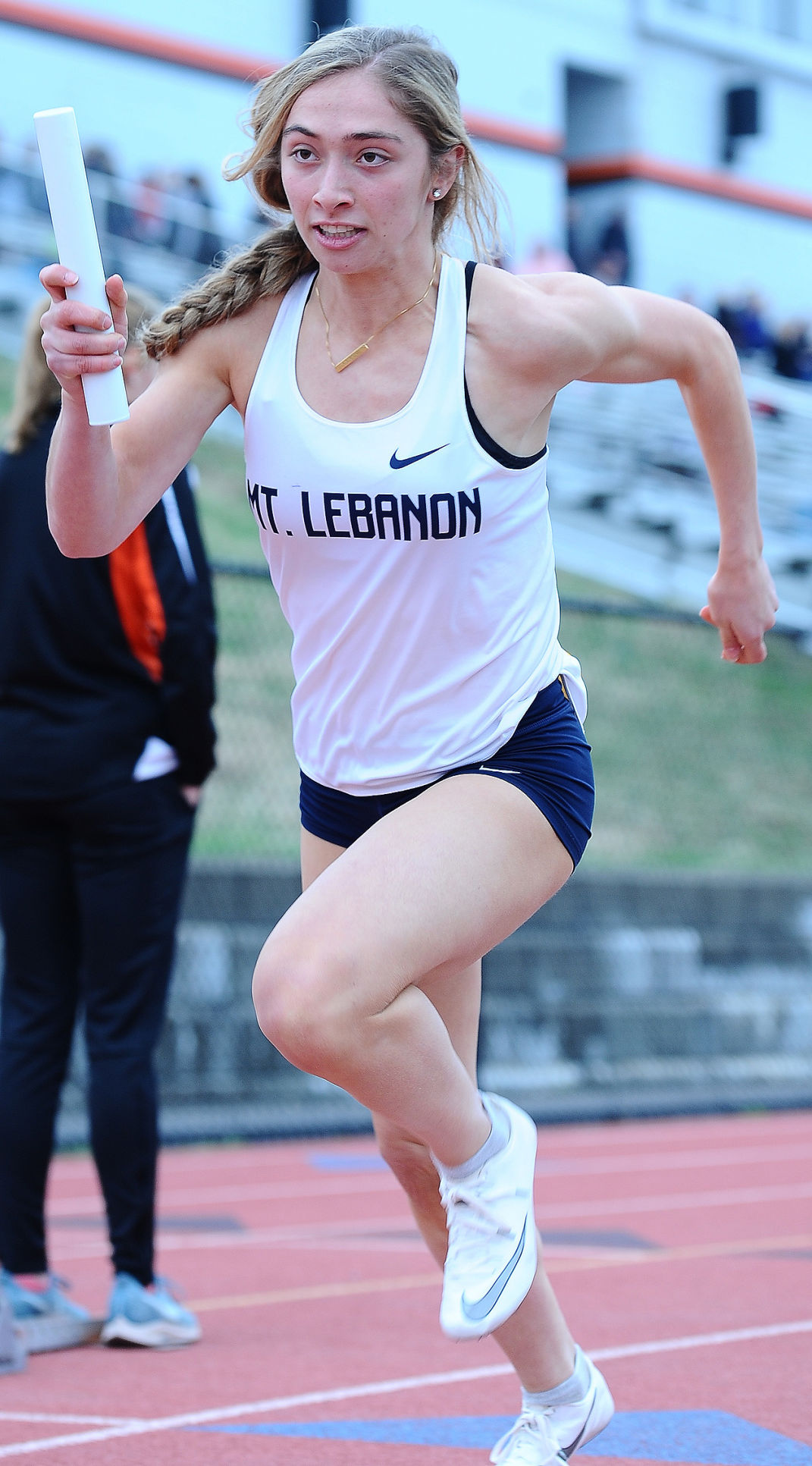 Patrice Smith leads off the 4-by-100 relay team for Mt. Lebanon.

Patrice Smith wears the medal she won in the 4-x-100 relay at the 2019 WPIAL championships.

Patrice Smith completes one of her jumps during the 2019 Baldwin Invitational.

Patrice Smith leads off the 4-by-100 relay team for Mt. Lebanon.

Patrice Smith wears the medal she won in the 4-x-100 relay at the 2019 WPIAL championships.

The coronavirus crisis didn’t teach Patrice Smith how to adapt to adversity.

Long before she lost her school year as well as her track season to COVID-19, the Mt. Lebanon High School senior figured out solutions to situations beyond her control.

Standing at 5-7, she could not change her height for basketball or her distance skills for cross country. So Smith channelled her speed into success on the track and a scholarship to Columbia University.

Smith, who competed in cross country as a freshman and a sophomore, remembers her struggles as a distance runner.

“I was a sight,” she said. “It was rough. My speed was geared more to shorter events. So I transitioned to sprinting.”

Smith also was a gifted basketball player. She picked up the sport in third grade at St. Bernard Elementary School.

“It was a fun thing to do with all my friends, an activity to keep busy,” Smith said. “I actually didn’t know I was fast. I just knew I was fast in basketball.”

So Smith continued to hone her skills on the court. She progressed so quickly that by the end of her sophomore season, she was invited to try out for the U-17 national team. At the trials held in Colorado, she advanced through several rounds before being cut.

“I was surprised to go there because some of the kids there were amazing. I had never seen players like that,” she said. “I still thought basketball was what I was best at. Then everything flipped.”

When the calendar changed, Smith had a championship spring her junior year.

In 2019, she led off Lebo’s winning 4x100 and 4x400 relay teams during the WPIAL finals at Slippery Rock University. She also won a bronze medal in the long jump and medaled in the 100-meter dash. She qualified for the PIAA meet in all four events. Though she did not reach the finals at states, she recorded a personal record time of 12.31 in the 100. She was named to the all-state team when the 4x100 team captured eighth place in Shippensburg.

“At first it was the other way around, but I like track better,” she said. “I had always thought I would play basketball in college, but when I transitioned to shorter races, I started being more successful. Especially in long jump, I found I was good at it.”

“I just made a connection,” Smith said. “Everybody was so welcoming. For me, that was important because I need people I can rely upon. The school felt like a home away from home. It was like being a part of a family.”

Family and athletics are important to Smith.

The 18-year-old is the oldest of Pat and Georgia Smith’s five children.

Her father played football at Mt. Lebanon and Villanova. His others brother, Jim, Dan, Bobby and Mat, also played for Mt. Lebanon and earned Division I scholarships. Jim was signed as a free agent with the Steelers and Dan was a standout pole vaulter at UVA.

Smith is a cousin of Josh Casilli, the Peters Township standout and Penn football recruit. Two of her other cousins, Aileen and Leah, swam at Columbia and Virginia, respectively. Leah went on to win gold and bronze in the Summer Olympics in Rio.

Smith’s brother, Jack, plays football, basketball and baseball at Mt. Lebanon while her sister, Gina, competes in basketball and track for the Blue Devils. She also has three other signlings, Jenny, 14, Patrick 12, and Emily, 10, who are just beginning their athletic endeavors.

“Patrice is the rock for her siblings,” Mt. Lebanon girls basketball coach Dori Oldaker said. “They all count on her on a daily basis.”

“She grew into a great teammate, leader and wonderful young lady,” Oldaker said. “Her personality stands taller than she does. Because of that, she is respected by those around her. She encouraged her teammates and brought life to our team.”

Smith helped the Blue Devils to an 18-7 record and berth in the WPIAL semifinals. She earned second-team, all-section honors by averaging 6.6 points and 2.3 assists per game.

“Patrice has the heart, drive, grit and characteristics of a student athlete,” Oldaker said. “She excels in the classroom and on the court and she does it with a smile on her face.”

“A lot of its pre-planning,” she said. “Before I go to bed at night, I think about everything that I have to do. If I don’t do this, then I’ll get sidetracked and not get anything done. I love to be busy. Sitting around is hard for me.”

In college, Smith will have little time to rest. She plans on majoring in biology and going on to attend medical school with the hopes of becoming a psychiatrist. Additionally, she will compete in track as a heptathlete. The two-day competition features seven events: 100-meter hurdles, high jump, shot put, 200-meter dash, long jump, javelin throw and 800-meter run.

“Obviously, I am going to work to be the best I can be at the collegiate level,” she said. “Qualifying for the NCAA championships would be a good goal to work towards.”

Mt. Lebanon track coach Oscar Shutt said he believes Smith has a chance for success at the next level.

“Patrice is a driven and fierce competitor,” Shutt said.

“She is a tireless worker in the weight room and practice field. She is always asking for more work to do. A leader by example whom I am sure is destined for success.”

Book: “We read a lot for school. Some people don’t but I really like the books on the list they give us. Great Gatsby is my favorite but I just read the Kite Runner and like it very much.”

Dream Destination: Europe. “I went to France for a D Day demonstration when I was in second grade but I don’t remember very much about it except we did get to see Paris. When I was also growing up, we had an au pair and from her the stories she told, it seemed like it would be so much fun to go there.”

People might be surprised to know this about you: I know how to play piano, in addition to violin. I been playing piano ever since I can remember and I actually like it better. When I first started playing the violin, I didn’t want to do it but my mom said ‘if you do it, you won’t regret it. And I don’t.”

Person you would like to have dinner with: Kobe Bryant. “You always hear stories about how hard-working and determined he was in basketball and life in general. So just having a conversation with him would be a cool experience.”

In 15 years, I will be: Settled down and starting a family.