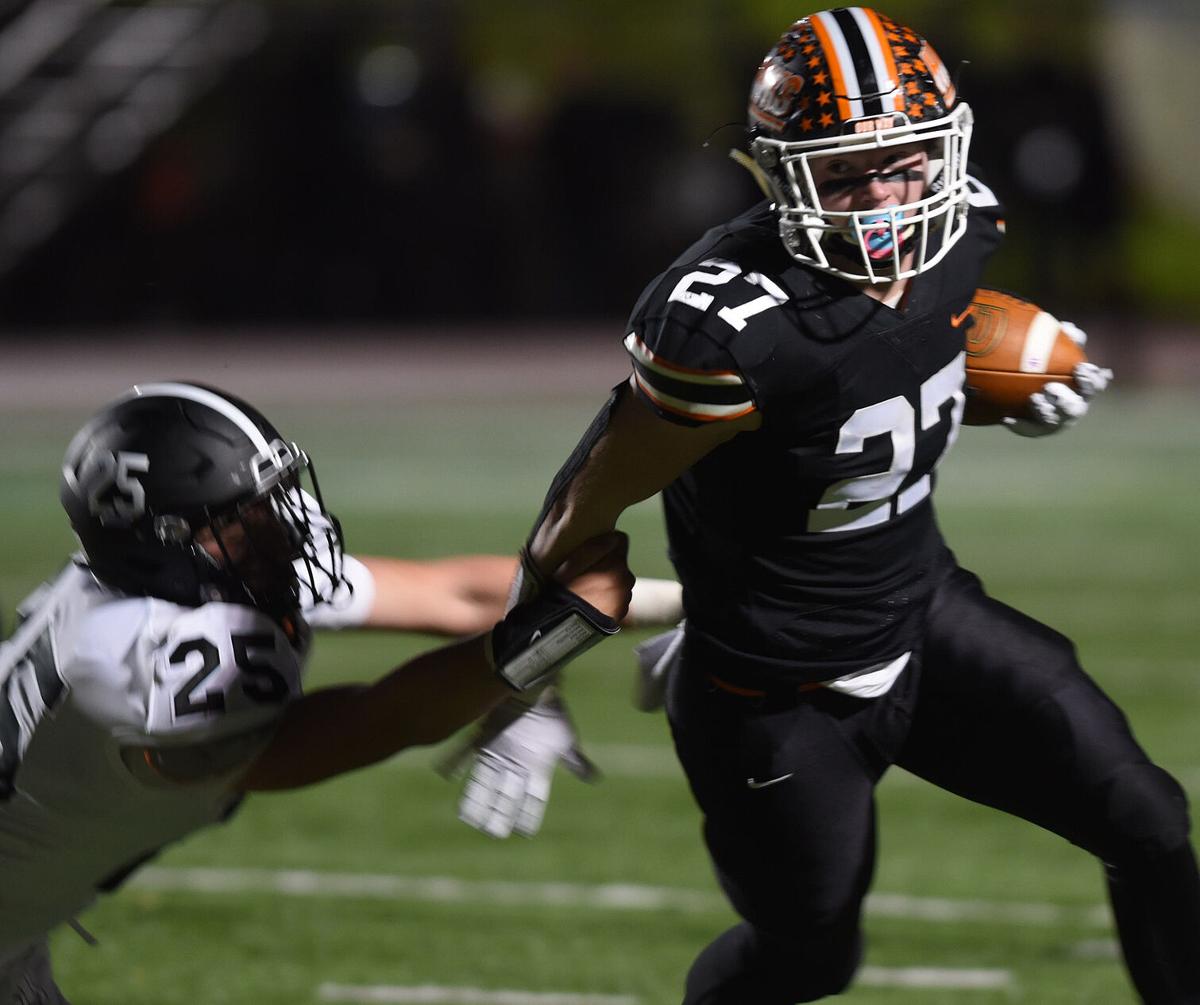 Bethel Park's Troy Volpatti shakes off a tackler during a 21-14 loss to Upper St. Clair. 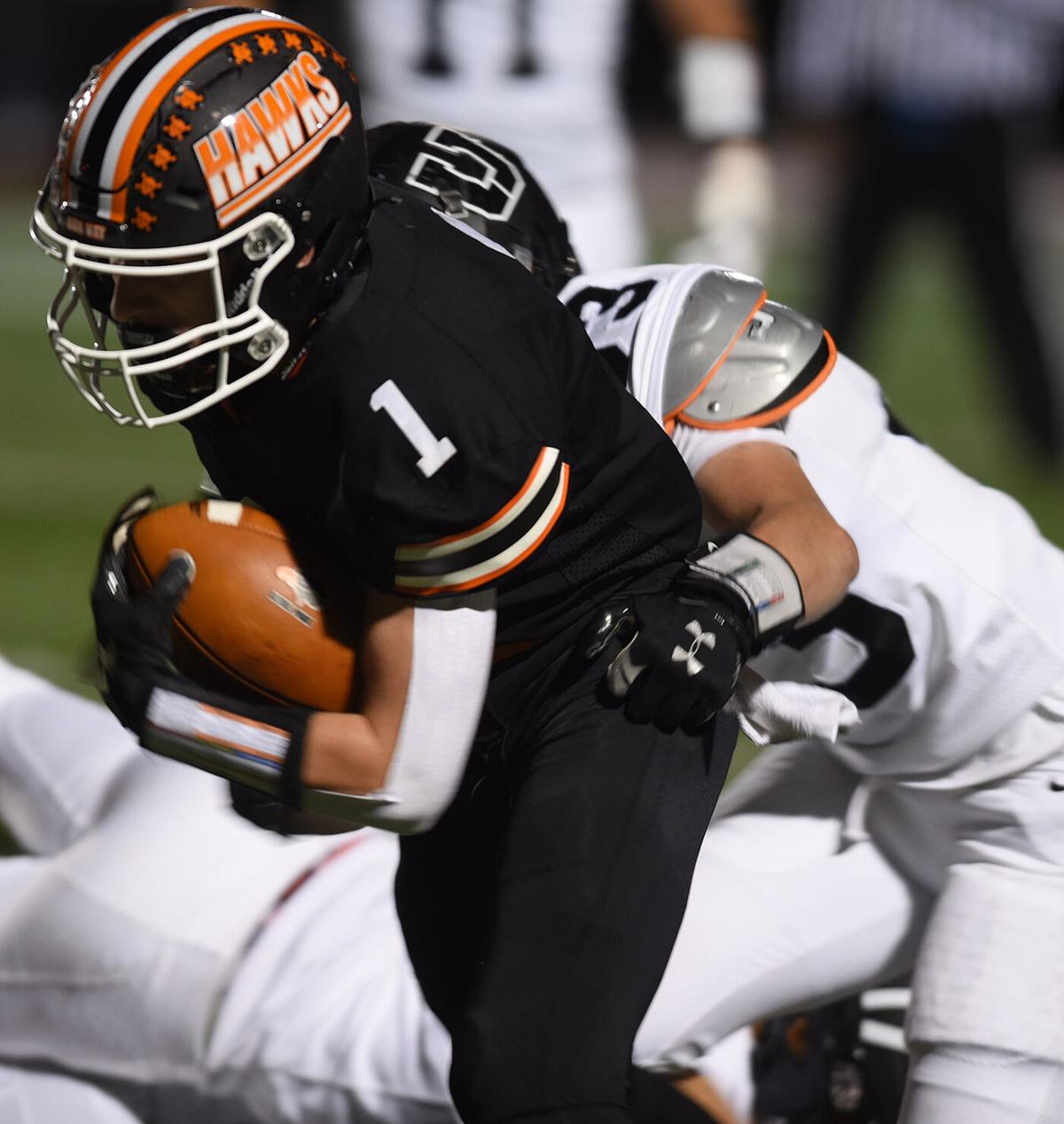 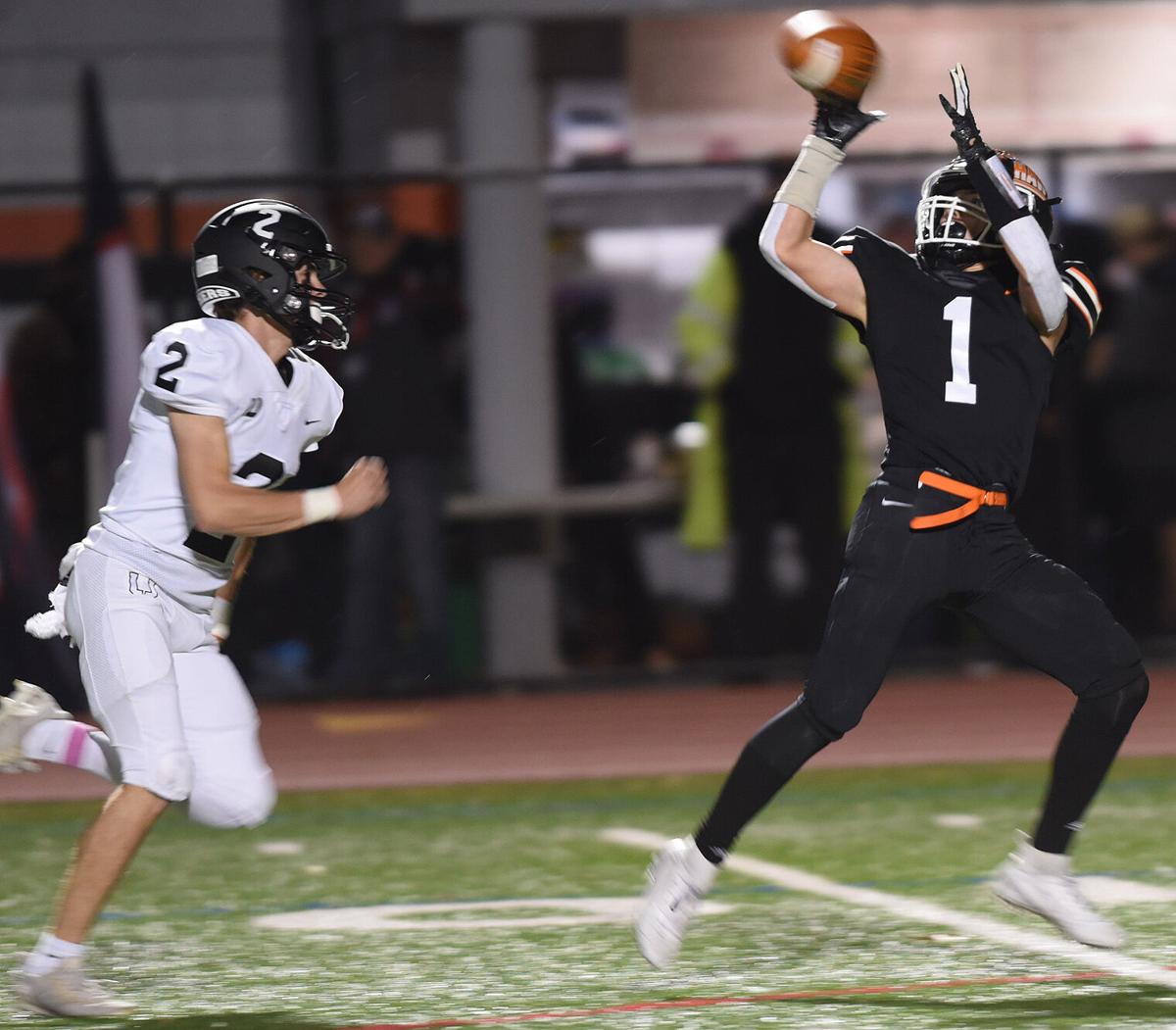 Bethel Park's Ryan Petras (1) gets a step on Upper St. Clair's Mateo Cepullio (2) and hauls in a 32-yard touchdown pass.

Bethel Park's Troy Volpatti shakes off a tackler during a 21-14 loss to Upper St. Clair.

Bethel Park's Ryan Petras (1) gets a step on Upper St. Clair's Mateo Cepullio (2) and hauls in a 32-yard touchdown pass.

Mt. Lebanon wrapped up its first undefeated regular season since 2010 and solidified its No. 1 seeding in the WPIAL 6A football playoffs by defeating Baldwin, 35-7, in its Quad Conference finale.

“Winning the conference was one of our goals,” Lebo head coach Bob Palko said. “Our approach each week, though, is to be the best we can be and to continue to build off our success.”

A 10-0 regular season record and 7-0 showing in the conference earned the Blue Devils a bye in the first round of the playoffs. Lebo hosts a semifinal game at 7 p.m. Nov. 12.

The WPIAL 6A championship game is set for 7 p.m. Nov. 20 at Norwin High School.

Lebo tuned up for the playoffs by handling the Highlanders. The Blue Devils mounted a 28-0 halftime advantage, enabling them to rest a few of their premier players.

In a game in which the Blue Devils rolled up 373 yards of offense, quarterback David Shields completed 7 of 9 passes for 102 yards. Jack Smith, who also occasionally takes snaps under center, caught a 39-yard scoring strike from Shields.

Joey Daniels tossed a 34-yard touchdown pass to Eli Heidenriech and Alex Tecza rambled for a 55-yard score to stake Lebo to a 14-0 lead.

A 2-yard dive into the end zone by Louie Pietragallo made it 21-0 by the end of the first quarter. Pietragallo added another rushing score of 3 yards in the third quarter and Noah Bhuta converted his fifth extra point to complete the Lebo scoring.

Tecza finished the regular season as the district’s No. 4 rusher and top runner in 6A with 1,426 yards and 18 touchdowns. Heidenreich had 32 receptions for 817 yards and 16 touchdowns heading into the playoffs.

The Black Hawks entered the WPIAL Class 5A playoffs as the No. 8 seed after a 21-14 loss to Upper St. Clair. Bethel Park finished the regular season at 5-5 overall and 3-2 in the Allegheny Six Conference before hosting Woodland Hills (4-6) Nov. 5.

In the loss to USC, Troy Volpatti rushed for 134 yards and a 5-yard score. He also tossed a 32-yard touchdown pass to freshman Ryan Petras.

Volpatti had one of BP’s three interceptions. Jack Reilly had the other two picks for the Black Hawks. Gavin Moul led in tackles with 8.5. He added three tackles for a loss.

Max Blanc completed five passes for 87 yards. He entered the playoffs with 97 completions for 1,308 yards and seven scores.

The Indians clinched a playoff spot with a 35-7 win against South Fayette in their final regular-season game. Peters Township finished 6-4 overall and 2-3 in the Allegheny Six Conference.

With the victory, the Indians gained the 11th seed in the Class 5A tournament. Peters Township traveled to North Hills Nov. 5 for its first-round playoff game.

Sam Miller engineered PT’s victory over South Fayette. He passed for 284 yards and four scores. He also rushed for another touchdown.

Jacob Macosko and Bryce Thompson each hauled in two scoring strikes for the Indians. Thompson finished with 147 yards receiving on eight catches. Macoscko had six grabs for 106 yards.

PT head coach TJ Plack said he was thrilled for the opportunity to play in the WPIAL tournament after his team’s fourth-place showing in the conference. The Indians suffered through several key injuries and a three-game losing streak to start conference play before finishing on a positive note with back-to-back wins against the Lions and West Allegheny.

“I think we’re a pretty good team,” Plack said. “We’re healthy and finally found the stuff that works with this new group of kids we have. We’re happy to play ball and compete.”