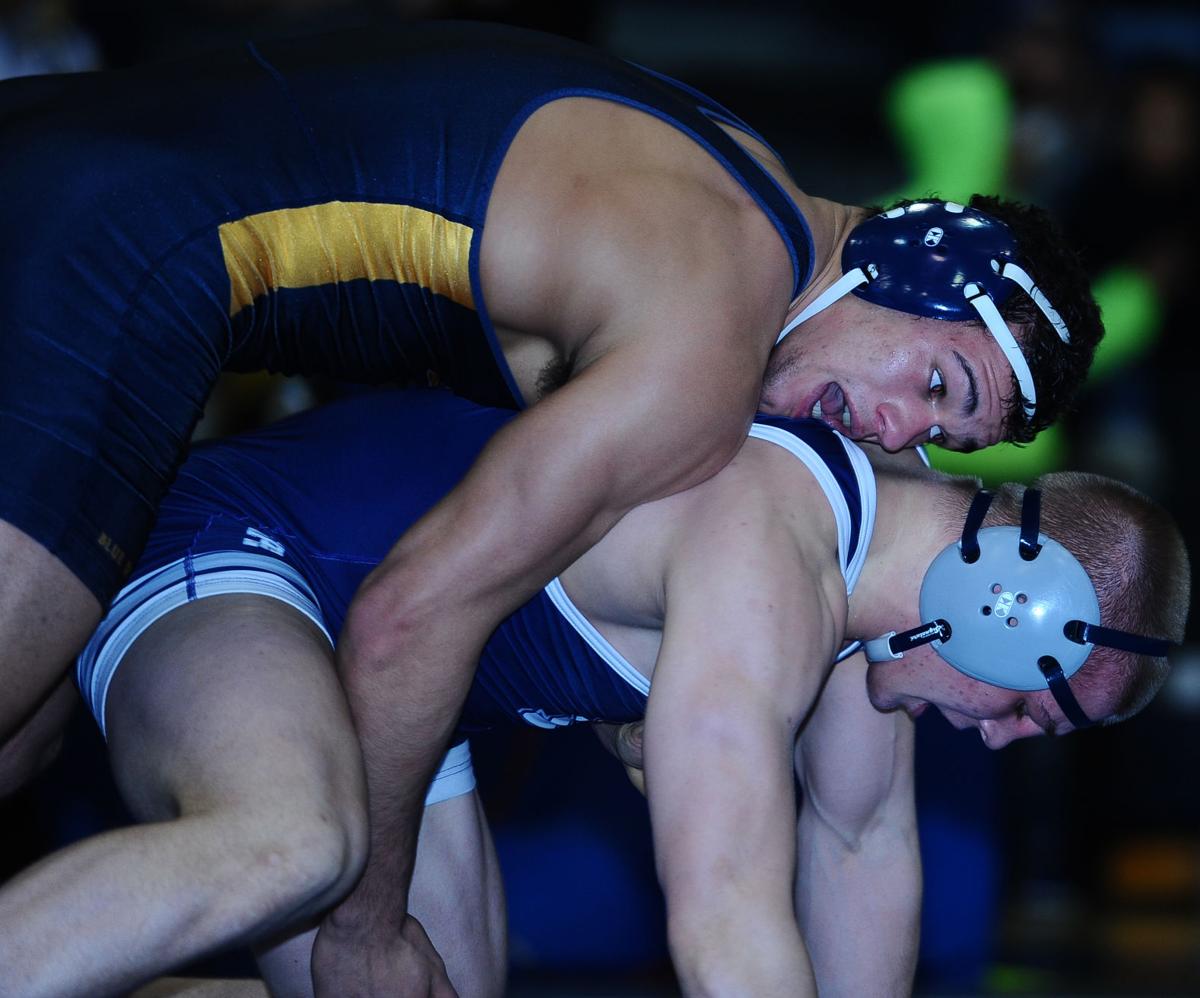 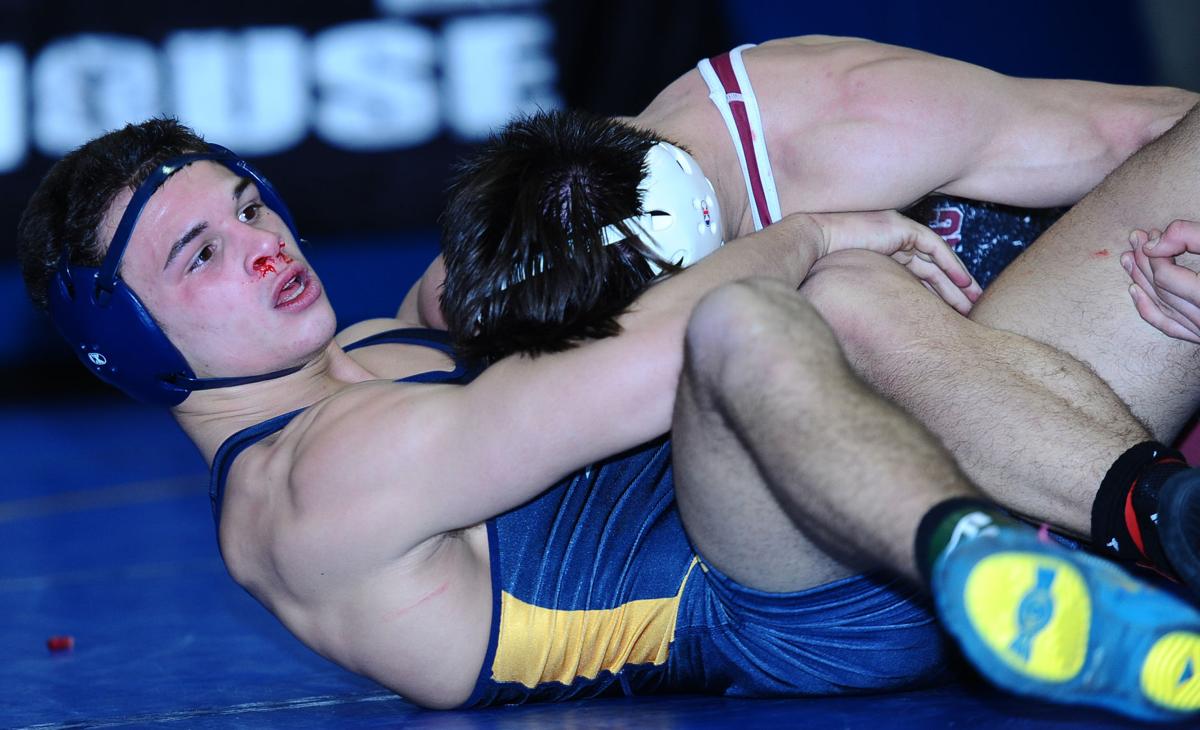 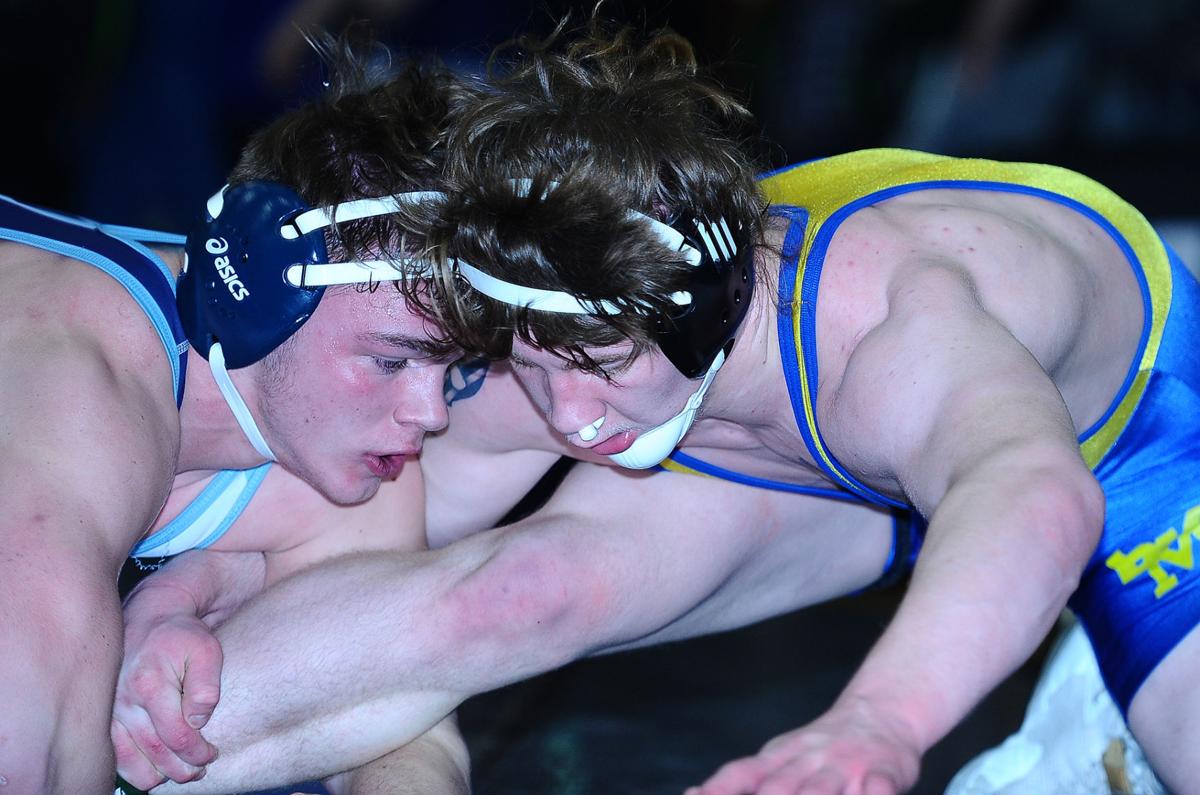 Canon-McMillan’s Gerrit Nijenhuis works on escaping from a leg hold placed on him by Cole Rees. The Big Macs senior defeated the Wyoming Seminary junior to claim the 182-pound weight class during the Powerade Wrestling Tournament. 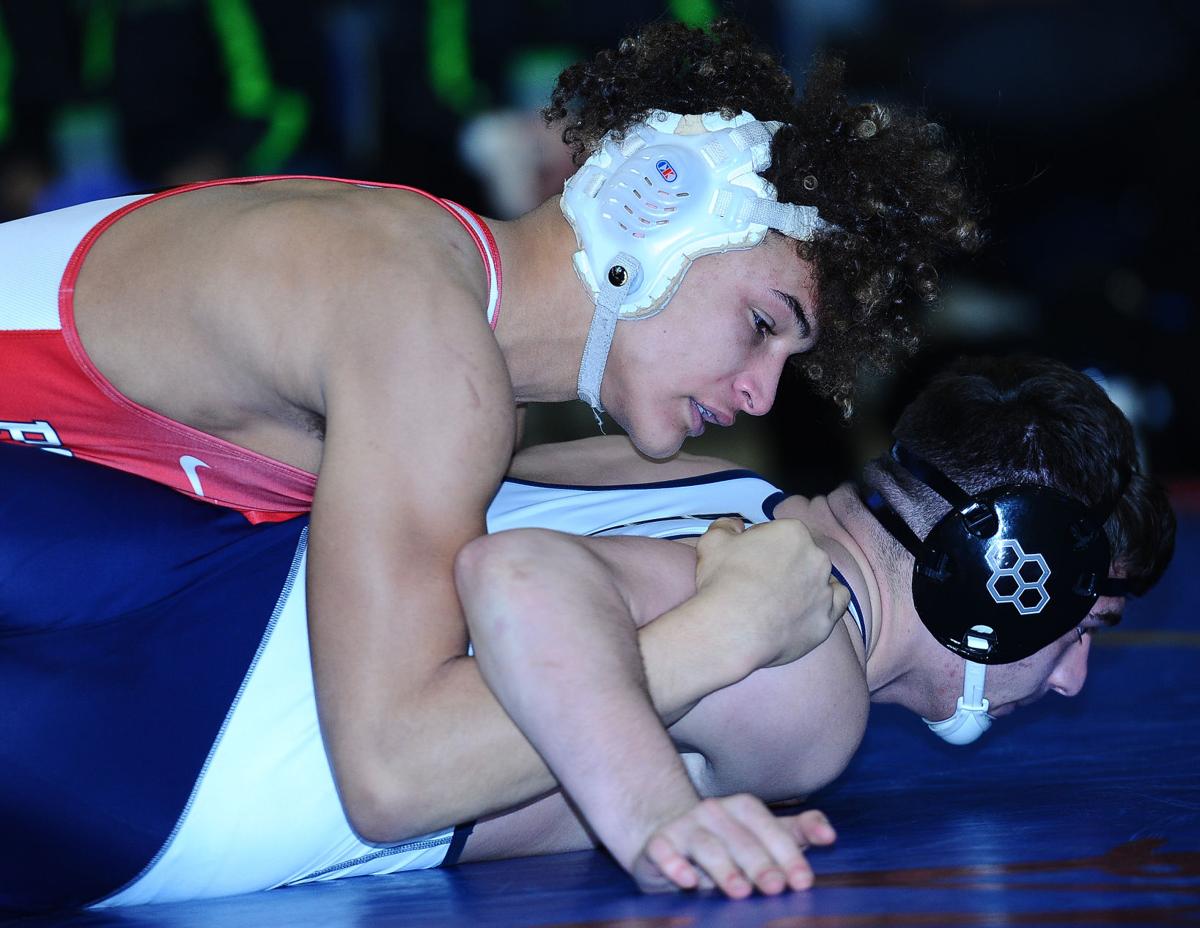 Canon-McMillan’s Gerrit Nijenhuis works on escaping from a leg hold placed on him by Cole Rees. The Big Macs senior defeated the Wyoming Seminary junior to claim the 182-pound weight class during the Powerade Wrestling Tournament.

Luke Stout became a Powerade wrestling tournament champion for the same reason he will defend his WPIAL title and vie for a PIAA crown in March. The Mt. Lebanon senior is focused.

“Wrestling is a priority to Luke and he is not going to let distractions get in his way,” said Lebo mat boss Marc Allemang.

“Luke does all the little things every single day. He lives his life the right way. He trains hard, he gets extra work outs in throughout the week, he eats right, he is coachable,” Allemang added. “That’s really what makes him a champion.”

On Dec. 28, Stout became a Powerade champion for the first time. A bronze medalist in 2018 at 182, he captured the gold at 195 in the 2019 tournament held at Canon-McMillan High School.

Stout edged Nicholas Feldman, 3-2, in the championship bout. The Malvern Prep sophomore is ranked seventh nationally FloWrestling while Stout is No. 4. Additionally, Feldman was a fourth-place finisher in last year’s Powerade and has been in the finals of some big tournaments this year.

“So,” said Allemang, “we knew (Feldman) would have a good match. He’s really good.”

However, Stout is a seasoned veteran, too. He is a member of the Century Club with more than 100 career victories and he was fresh off winning a title at the Eastern Area Wrestling Tournament to kick off the 2019-20 campaign.

Stout is well acquainted with the pressures of competing in championships, especially when one is the top seed.

“Luke remained confident,” Allemang said. “He has been in a lot of big matches so he is really good at not letting a lot of emotions change the way he wrestles.”

Though Stout dominated, nearly scoring a takedown in the second period, he did not seal the victory until late in the third period when he registered a take down against Feldman.

Noting Feldman showed balance and flexibility in staying on his feet in the second period, Allemang felt Stout controlled the bout.

“Luke dominated the positions and really did an excellent job of keeping good position,” Allemang said. “He also did a great job of returning his opponent to the mat each time he got to his feet.”

Stout knocked most of his opponents of their feet. After scoring a major decision, 16-4, against Burrell’s Ricky Feroce to open tournament action, Stout pinned Mifflin County’s Jacob Krepps in 2:41 and Bullis School’s Austin Brown in 3:17 to reach the Final Four. In the semifinals, Stout decisioned Wadsworth’s Dom Loparo, 11-4.

“Luke was in control in each match that he wrestled,” Allemang said. “Throughout the tournament, Luke was getting to his hand fighting really well and getting to his leg attacks.”

Noting Stout had placed at the tournament several times, Allemang added, “Earning that Powerade title was something he wanted to accomplish.”

Stout’s younger brother, Mac, also wanted to win a Powerade title but the Lebo sophomore settled for fourth place in the 170-pound weight class. He entered the tournament seeded seventh.

“We knew as a staff that he was going to show he can place higher,” Allemang said.

Noting he is “bigger” and “stronger” than he was as a freshman, when he posted 32 victories, Allemang said it is “pretty clear” what Mac wants to achieve this season and added that two of his losses in the tournament came to the No. 2 and No. 5 seeds. Mac stayed close to his opponents. He lost his quarterfinal bout, 1-0, to Tyler Stoltzfu from Saint Joe’s Academy and his third-place match in overtime, 5-1, to Leonard Pinto from Stroudsburg.

“Mac knows he is right there amongst the best in the country and I think he showed that,” Allemang said.

“Both wrestlers were pretty strong. (Stoltzfus) kept in really good position and made it difficult for Mac to get any angles on his leg attacks. Again (against Pinto), Mac had some opportunities but was unable to convert any points. Mac pushed the pace and I think he wrestled really hard.”

In 2020, Allemang has high hopes for the Stout brothers. Luke has been to the PIAA championships three times, finishing as a runner-up last year. Mac finished fourth in the WPIAL and just missed a trip to Hershey.

Mac and Luke are doing what they need to do to win a state title and their success at Powerade gives them confidence to wrestle with anyone.

“Mac is really just starting to show how talented he is and he is going against high-level guys. Luke is really focused. He knows what he is capable of accomplishing and will not take that for granted. He will continue to train hard and smart.”

Allemang was pleased with Lebo’s 20th place showing in the 53-team event, which also included a junior varsity, junior high and youth tournament. He also cited Jackson Gray. The 145-pound senior reached the quarterfinals but lost to Mason Spears from Franklin Regional in the fifth-round of consolations.

“Jackson needed to win one more match to get on the podium but he had a tough match against Mason,” Allemang said of the 3-1 decision.

Allemang also only had praise for the event, which was established in 1967. He hopes the Blue Devils continue to be extended an invitation to compete.

“The Powerade is a great tournament. How fortunate are we to have a tournament as prestigious as this only 25 minutes from our school,” Allemang enthused. “Frank Vulcano and his crew do a fantastic job. The amount of effort it takes to coordinate everything is unbelievable. They are extremely organized in how they run those tournaments. The level of competition is strong every single year and we hope that we can continue to show that we are worthy of being invited back each season.”

Gerrit Nijenhuis dominated the action at 182 pounds and became a Powerade wrestling champion for the first time. The Canon-McMillan senior, wrestling on his home mats, breezed through the weight class, picking up three pins in the process.

Nijenhueis, who a district and state championship, defeated Cole Rees from Wyoming Seminary, 10-0, in the championship match to seal his title. He scored a decision against in the semifinals.

“It’s a great feeling,” Nijenhuis said. “I’ve come up short in the past but now I can check this off my bucket list.”

“Win that second state title and finish the season undefeated,” he said.

Nijenhueis was certainly flawless in the Powerade Tournament, which featured 53 teams and some of the finest competition in the nation.

After recording three, first-period falls in his opening matches, the faster coming in 25 seconds, Nijenhuis faced his toughest opponent in the semifinals. In his closest match of the tournament, he defeated Nathan Warden from Christiansburg (VA), with an 8-5 decision.

Nijenhuis was one of two local champions as Luke Stout of Mt. Lebanon won the 195-pound title with a 3-2 decision over Nicholas Feldman from Malvern Prep. (See related story.)

The top eight wrestlers in each weight class received medals.

For the fourth time in the last five years, Wyoming Seminary won the team title with 272 points. The school did not participate in last year’s tournament. Malvern Prep was a distance second with a 178 score. Waynesburg took third (146.5).

The Big Macs, finished fourth in the team standings with a 133 total. Giomar Ramos placed third at heavyweight to help CM’s cause. The Big Macs also benefited from seventh-place showings from Jacob Houpt at 106 and Evan Miller at 220.

Donovan McMillon lost in the quarterfinals but the Peters Township junior battled back through the consolations to take third place at 182 pounds.

“When I lost in the quarterfinals,” McMillon said, “my coaches told me the goal was third-place so let’s go 1-0 each time.”

After going 2-0 in his opening bouts against Franklin Regional’s Dylan Singleton (fall in 1:17) and Zion Carpenter from Oscar Smith in Virginia (tech fall at 5:02), McMilon dropped a 4-2 decision to Cole Rees, who finished runner-up to Gerrit Ninjenhuis.

Dropped into the consolation bracket, McMillon went 4-0 on the second day of competition. He pinned Bryce Mccluskey in 1:44 before scoring 6-2 and 6-0 decisions against Owen Amburgy and Nathan Warden to reach the third-place bout. There McMillon polished off Ryan Weinzen of Norwin with a pin at the 1:51 mark in the first period.

January is a busy and critical month for the Mt. Lebanon High School wrestling team.

Last year, Lebo won its subsection and competed in the WPIAL team tournament.

"Hopefully, if we continue to wrestle hard, we will be back in the section and WPIAL playoffs," said Lebo skipper Marc Allemang.

"We will continue to stay focused and hopefully put ourselves in a good position to accomplish our team and individual goals," Allemang said.

The individual sectionals are set for Feb. 20. The WPIAL championships will be held Feb. 28-29 with the PIAA championships set for March 5-7 in Hershey.