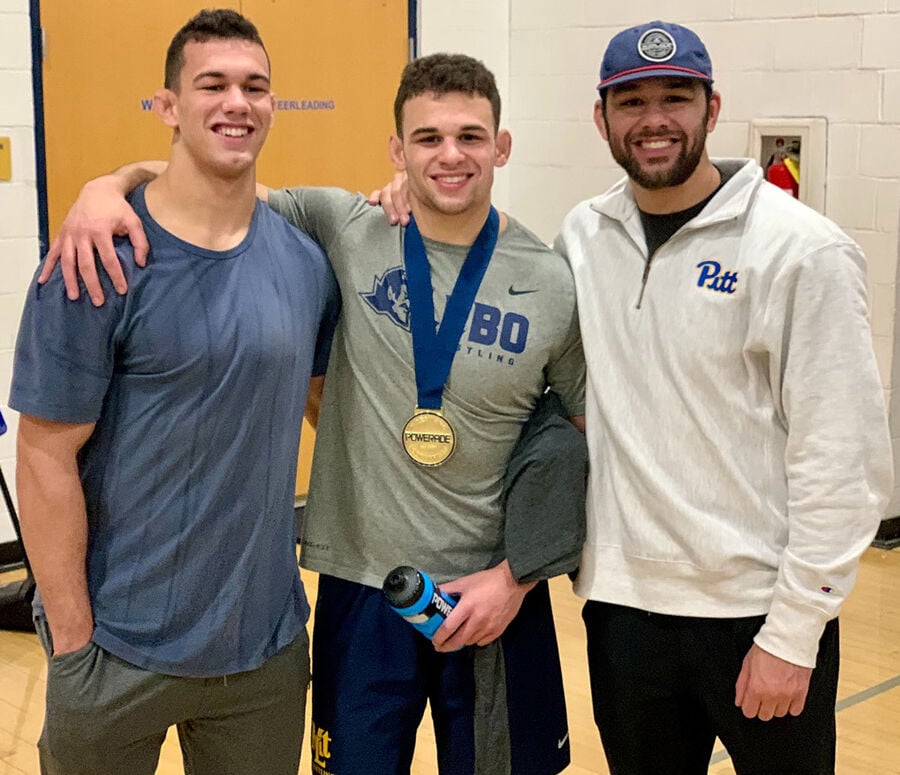 Mac Stout, center, poses with his brothers, Luke and Kellan, after winning the 189-pound weight class during the Powerade Wrestling Tournament. All three brothers were Powerade champions. Mac also hopes to follow in his brothers' footsteps and win a PIAA title in March. An injury prevented him from achieving the goal last winter. Mac was a WPIAL champion and PIAA runner-up in 2020. 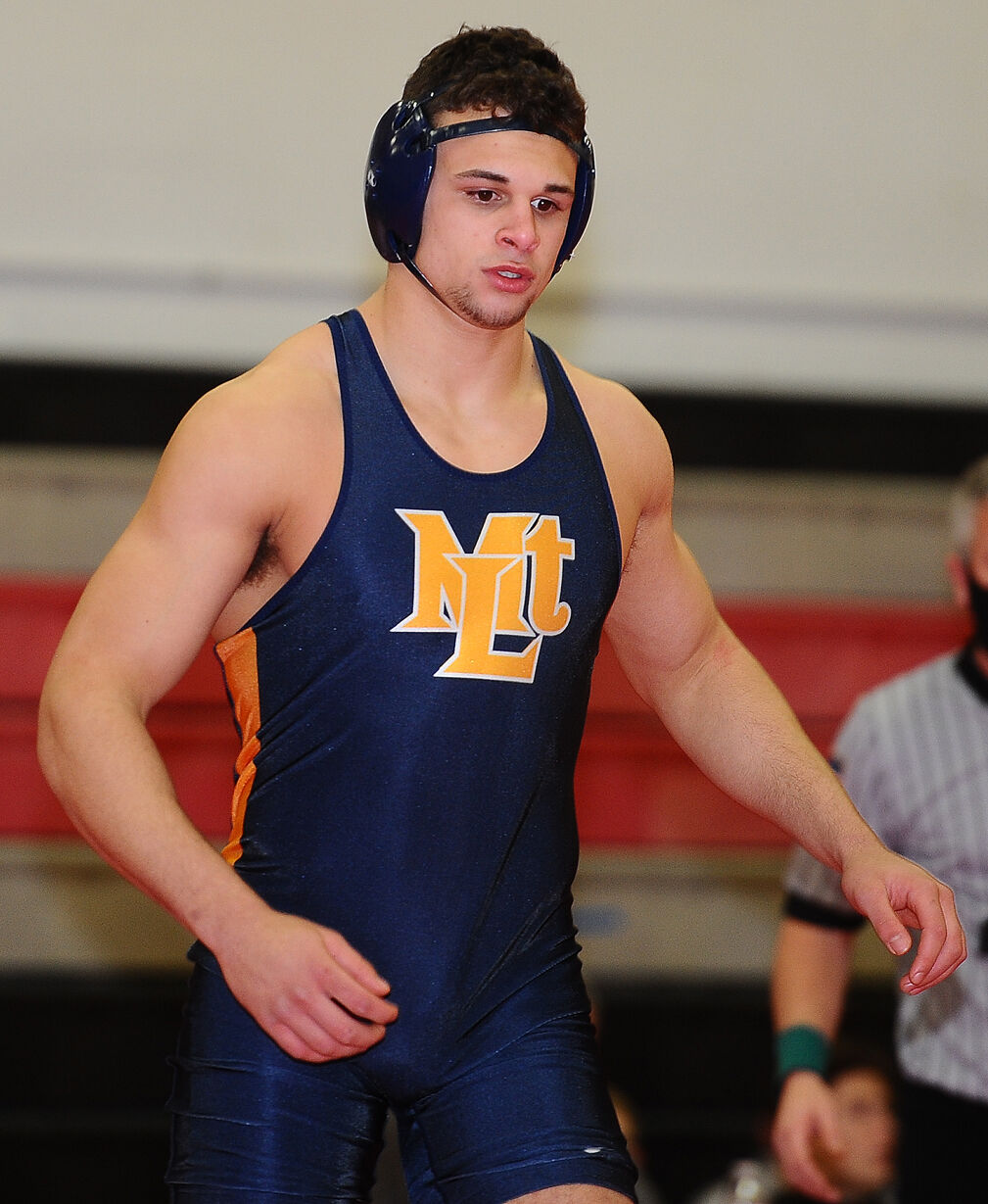 Mac Stout has an 18-0 record this winter.

Mac Stout, center, poses with his brothers, Luke and Kellan, after winning the 189-pound weight class during the Powerade Wrestling Tournament. All three brothers were Powerade champions. Mac also hopes to follow in his brothers' footsteps and win a PIAA title in March. An injury prevented him from achieving the goal last winter. Mac was a WPIAL champion and PIAA runner-up in 2020.

Mac Stout has an 18-0 record this winter.

Mac Stout has successfully returned to the wrestling mats after missing much of last season because of an elbow injury.

The Mt. Lebanon senior kicked off his final high school campaign by earning his 100th career victory during the Moon Duals. He closed out 2021 by winning his first Powerade Tournament championship.

“One hundred career wins is a great accomplishment but I think we all know what Mac is focused on,” said Lebo head coach Marc Allemang. “WPIAL and PIAA championships are the goal.”

Stout agreed with his coach’s assessment.

“A cool accomplishment,” he said. “Obviously, though, the goal is a state title.”

During his 42-3 sophomore season, Stout captured a WPIAL championship but fell short of a PIAA title, falling in the finals to finish as a state runner-up. As a junior, he rolled up 17 wins in 19 matches before injuring his elbow in the Powerade Tournament. He had surgery Feb. 14, rehabbed for three months and finally saw his first action on the mats in June.

“I did all l possibly could do to stay busy because being off the mats was hard for me,” Stout said.

Stout grew up on the mats. His father, Bryan, was a volunteer assistant with the University of Pittsburgh wrestling program from 2002-10. His brothers, Kellan won a PIAA title in 2015 before Luke captured a state crown in 2020, also set a good example. Kellan was an NCAA qualifier in 2019 and Luke wrestles at Princeton.

“My brothers have been very inspirational and instrumental,” Stout said. “They are good with understanding things, particularly injuries.”

To get back to championship form, Stout worked out three to four times a week at the University of Pittsburgh. He trained with a plethora of partners such as Jake Wentzel. A South Park resident, he was an NCAA runner-up last year.

“I have to credit my brothers as wells all those guys I trained with for helping me get back,” Stout said. “It was a long, hard road. At first, I thought I could tough it out without surgery but that was my smartest option. I feel great now.”

Allemang agrees with Stout’s assessment that he doesn’t have a “bad” elbow.

“He is healthy. Strong,” Allemang said. “He has been training hard since he was cleared to train. Mac and hist family are professionals and they take everything they do very seriously. His rehab and training through the summer was no different. By fall, Mac was firing on all cylinders. He hasn’t looked back.”

Stout left the Powerade competition in his rearview mirror.

He scored falls over Cole Clark from Burrell and Joey LaPenna from Notre Dame in his opening matches then scored a major decision against Patrick Cutchember from Quaker Valley, 15-5, in the quarterfinals.

After an 8-5 decision against Brian Finery from Thomas Jefferson in the semifinals, Stout defeated Jude Correa from Wyoming Seminary, 4-2, to win the 189-pound weight class.

“It felt great to wrestle and great to get the result. Really cool to see after all the hard work,” Stout said. “You train for the good competition. You trust the process. Stick to what works. In the end when it pays off, it feels good.”

Experience, methodology and level-headedness proved beneficial to Stout in the tournament, which features some of the best wrestlers in the nation.

“Mac wrestles the person in front of him,” Allemang said. “He is really calm and collected and doesn’t get too caught up in anything else around him. Mac focuses on the details of his own wrestling.

“It is easy for a lot of wrestlers in a big tournament like this to get caught up with who you might have to wrestle and what will the path of the bracket look like. Mac is a veteran and he carries himself like one. Lots of things outside your control can happen in tournaments.”

This month, Stout is focused on section action as well as the Allegheny County Championships set for Jan. 14-15 at Fox Chapel High School. All are tune-ups for the postseason, which begins with sectionals Feb. 26 followed by district and state championship action.

“States is the ultimate goal,” Stout said. “My thoughts are on achieving that goal and what I have to do to accomplish it. I believe I have the talent and all the tools to get it down. Throughout my career, I have found it’s all mental. You have to trust the process, believe in your training, know you can do it. Then just do it.

“I’m checked in. No distractions. Do all the little things. That’s what makes the big difference.”