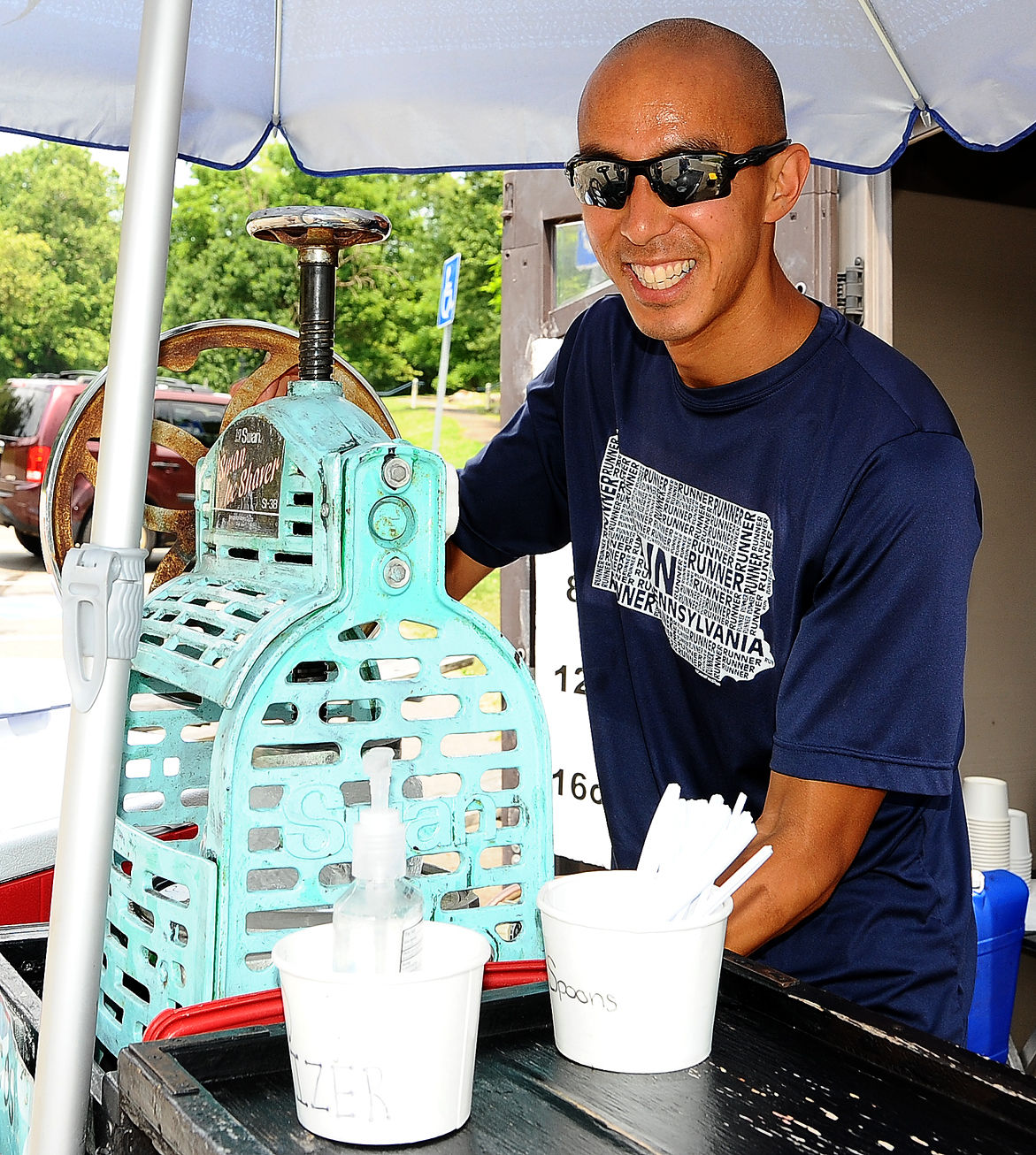 Tim Wu works the machine that shaves the ice for the frozen treats he sells to customers. 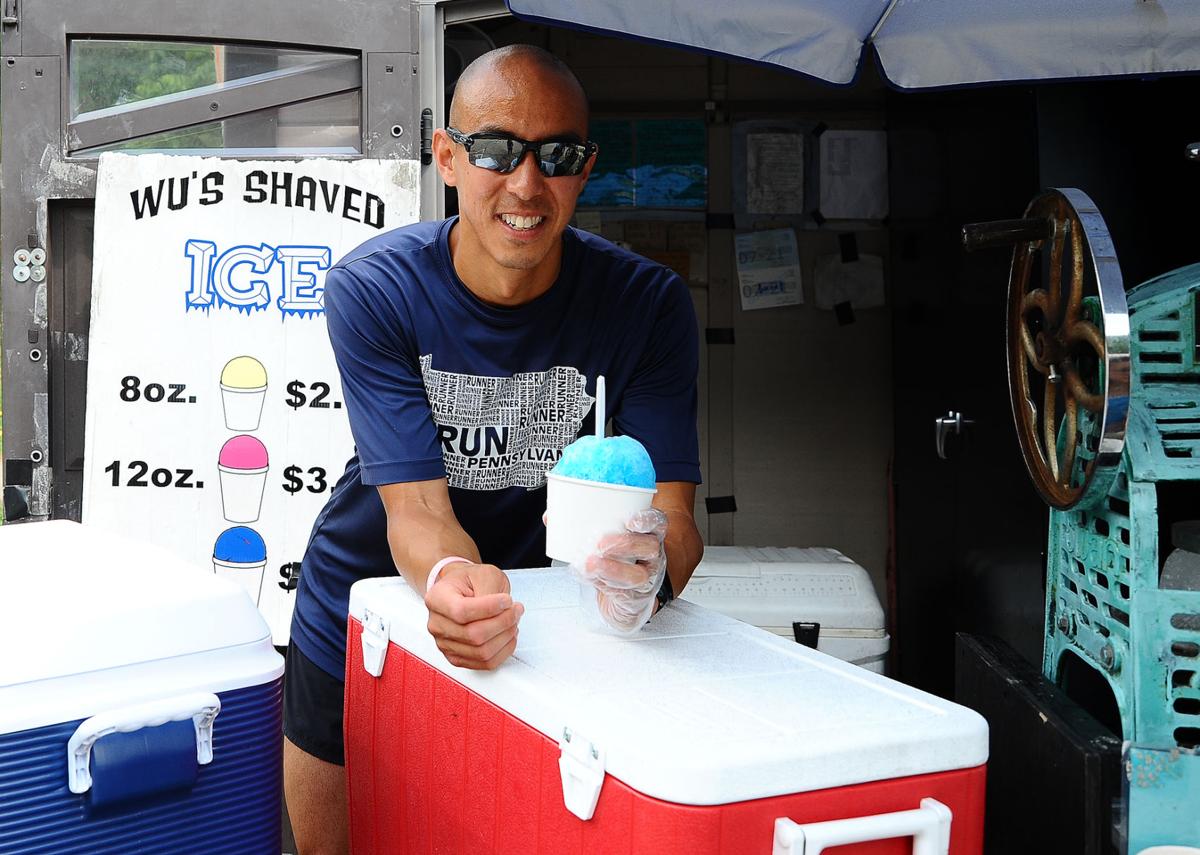 Tim Wu serves up shaved ice in South Park and at farmer’s markets as well as community events. 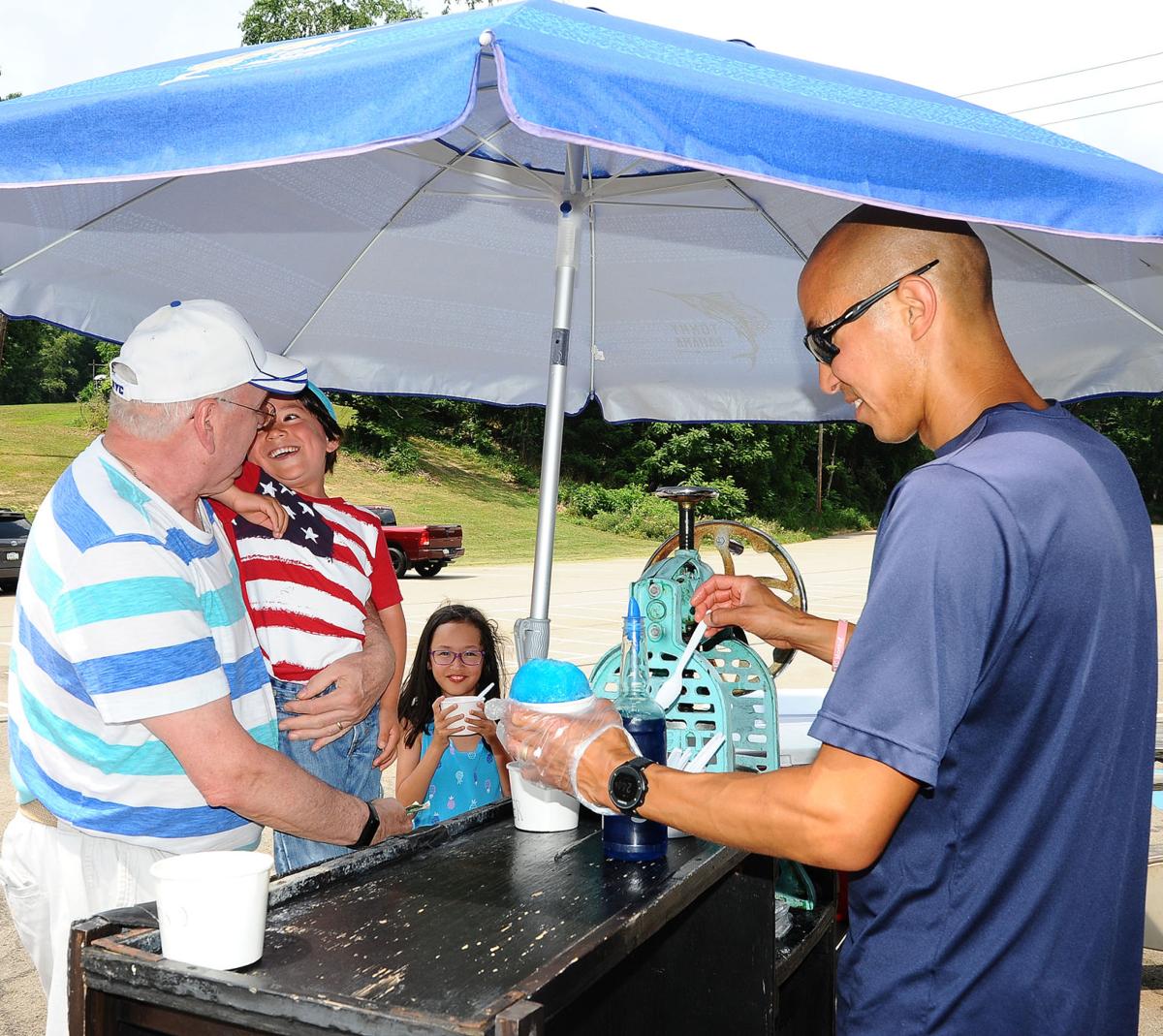 Tim Wu serves up a cool treat for Jim Harter of Upper St. Clair and his grandchildren, Francis, and Rosemary Janiak from South Fayette. 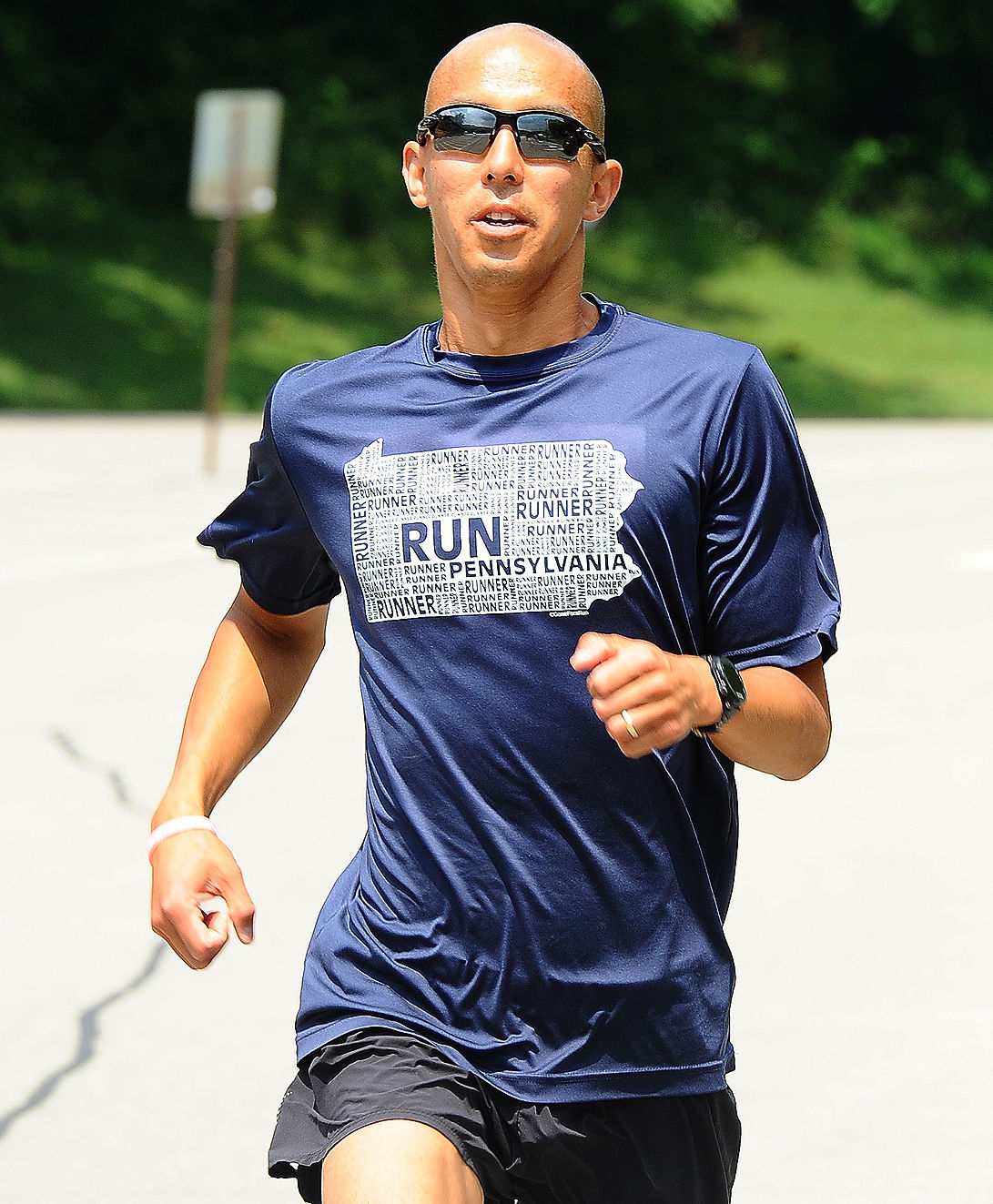 Tim Wu finishes up a workout.

Tim Wu gets a workout run completed in between business hours.

Tim Wu works the machine that shaves the ice for the frozen treats he sells to customers.

Tim Wu serves up shaved ice in South Park and at farmer’s markets as well as community events.

Tim Wu serves up a cool treat for Jim Harter of Upper St. Clair and his grandchildren, Francis, and Rosemary Janiak from South Fayette.

Tim Wu finishes up a workout.

Tim Wu gets a workout run completed in between business hours.

Well beyond those years though, he expects to be selling shaved ice.

“For the rest of my life,” said the 39-year-old Upper St. Clair resident.

Wu said he plans to be “just like” Gus Kalaris and his wife, Stella, the couple who has sold hand-shaved ice for decades on the North Side of Pittsburgh.

“Legendary,” said Wu of the famous Gus and Yia Yia’s stand, which dates back to 1934 when it was operated by Kalaris’ father, George.

Wu’s Shaved Ice is getting to be just as fabled. The business has been a fixture at the corner of Corrigan Drive and Brownsville Road in South Park, next to the children’s playground.

Wu purchased the concession in 2004 when original owners, Bob Kail and his brothers, looked to expand their parking lot business. Wu had worked previously for Kail, whose seven children have at one time helped run the operation.

“It was a family business that they ran on the side,” Wu said.

Under Wu’s guidance, the operation has been transformed into a full-time occupation.

In addition to the stationary stand, Wu’s Shaved Ice cart travels throughout the region serving up cool treats at farmer’s markets, fundraisers, community days and athletic events, including local football games. Wu’s Shaved Ice has been a staple at the Brentwood Fourth of July celebration, Great Race and Pittsburgh Marathon as well as the WPIAL and District 10 cross country and track championships.

Despite the economic ramifications of the COVID-19 pandemic, WU said things are going well. Although sales are down this year, he’s doing enough to make a living.

“With a lot of events being canceled, it’s been hard,” said Wu. “I’m surviving.

“The weather has been helping. The hotter, the better. If it’s sunny, (the business) does well.”

Customers’ claims speak volumes about the business. Jim Harter of Upper St. Clair brought his grandchildren, Rosemary and Francis Janiak from South Fayette, to the site on an afternoon where temperatures exceeded 90 degrees.

“We can usually go to other places,” Harter said. “This one is out of the way, but I specifically brought them over here so they could get a Wu’s Ice.

“And it’s good,” exclaimed Rosemary. “It was worth it.”

“I’m a kid’s best friend,” he said. “With shaved ice, people are always happy. They like the flavors and it cools them off.”

While Wu shaves his head to cool off, the fashion statement has nothing to do with his occupation. Wu is a seasoned runner as well as a cross country and track coach at Peters Township High School. Since high school, he has shaved his head.

“I thought it would make me run faster,” he said with a laugh.

It didn’t. Wu was initially an average runner.

With prodding from Jon Cline and encouragement from Terry Tressler, he blossomed into the No. 1 runner on Peters Township’s cross country team by his senior season. With Jim Lear as his task master, Wu improved his technique and lowered his times as a walk-on at Duquesne University.

“When I first started running in first grade, I couldn’t run one single lap,” Wu said. “In middle school, I discovered I had endurance and I could keep running and running, but I really got into it because my coaches encouraged and complimented me. When I learned how to train, my times got faster.”

The fastest Wu ran in high school was a 17:50 5K, which allowed him to qualify for the WPIAL championships. Wu’s top time for an eight-kilometer course in college was 26:56.

“I certainly wasn’t the fastest. There were so many guys who were faster than I was, but I really fell in love with running,” Wu said.

After earning a degree in marketing, Wu fell in love with coaching. His first job was as an assistant coach to Jen McMichael at Ringgold High School.

“When she called me about the opportunity, I didn’t even need a second to think about it. I had been going to races like the Mingo Meet just for the fun of it and I realized I loved watching high school meets. It was like reliving my childhood, high-fiving the kids and things,” Wu said.

While running on the Peterswood and Montour trails, Wu learned the head coaching position at Peters Township opened. Encouraged by Baldwin’s Rich Wright, Wu applied for the job.

“Everyone told me ‘you would be good at this. Absolutely, you should go for it,’” Wu said. “I had a lot of support.”

Wu is scheduled to enter his eighth year at Peters Township this fall. He has coached track athletes like WPIAL champion Joe Wolk and all-state runner Zack Marmol, who finished eighth in the PIAA in 2019.

Wu said he prides himself on seeing all of his runners make progress.

“It’s about building relationships with the runners and the parents and working with the athletic administration,” he said. “You cater to all the kids. No matter what their abilities, you try to help them grow as people so they can apply what they have learned to be successful later in life.”

After five years of marriage, Wu will become a father for the first time at the end of January.

“This is going to change a lot of things,” he said. “No one is every ready, but other coaches have done this. So I will just have to learn all that stuff. How to balance and prioritize things. It may be hard and it won’t happen in one day but we’ll figure out a plan.”

Wu is excited about parenthood and the prospect of returning to sports this fall.

Although the coronavirus pandemic thwarted the spring track season, he is hopeful it won’t impact the next cross country season.

“I felt bad for the athletes, particularly the seniors,” Wu said. “They were all excited for track and the season got taken away before their eyes. It was sad because there was a lot of potential for personal bests and records that were never accomplished.

“It will be interesting to see what happens in the fall and how it goes.”

Who: Owner of Wu’s Shaved Ice

Winter work: DoorDash and Grubhub. “I used to drive for Uber and Lyft but that was too much wear and tear on the car.”

Hardest thing about operating your own business: I’m big on integrity so finding reliable employees. People I can trust because it’s a cash business.”

As an expectant parent, do you hope your child runs: “Yes, but it’s not my choice, it’s theirs. I’d like them to try other sports. Keep an open mind. I played baseball when I was young. I tried basketball and I wasn’t any good. No coordination. Running involves only going in a straight line and not tripping.”

Future goals: Grow the business. Get bigger and better events. Coach more kids to medals and help them grow as people. Kids want to work hard. They just need experience. I want to encourage them but I’m not their best friend. I tell them what they need to hear, not what they want to hear.