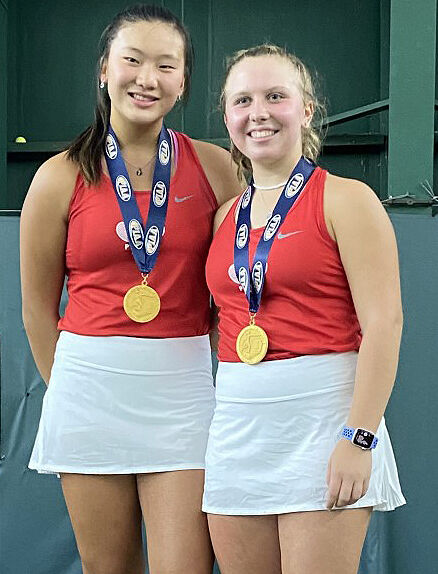 Kat Wang and Marra Bruce stood atop the podium again in 2020 after they captured their second straight PIAA doubles tennis championship. 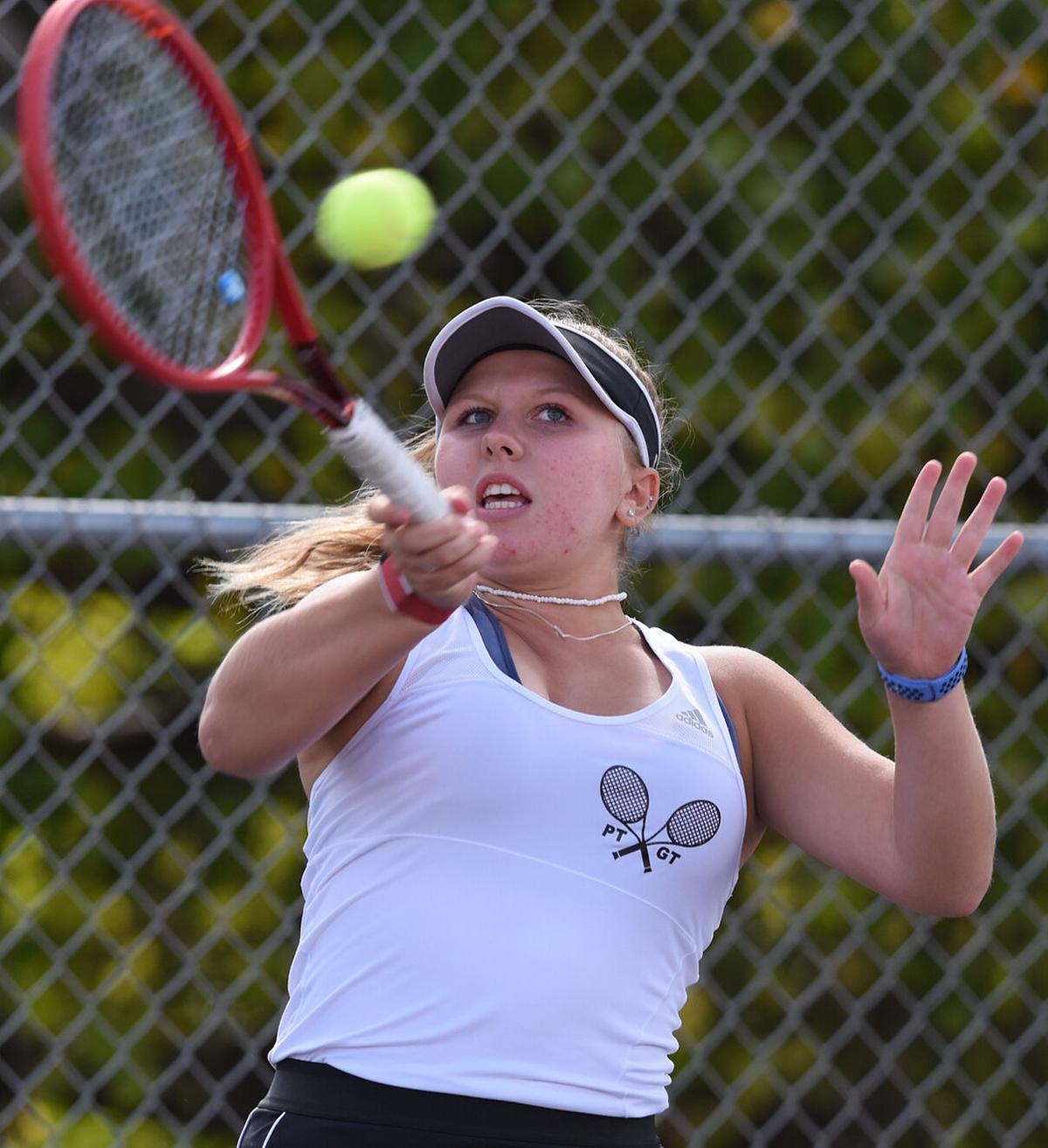 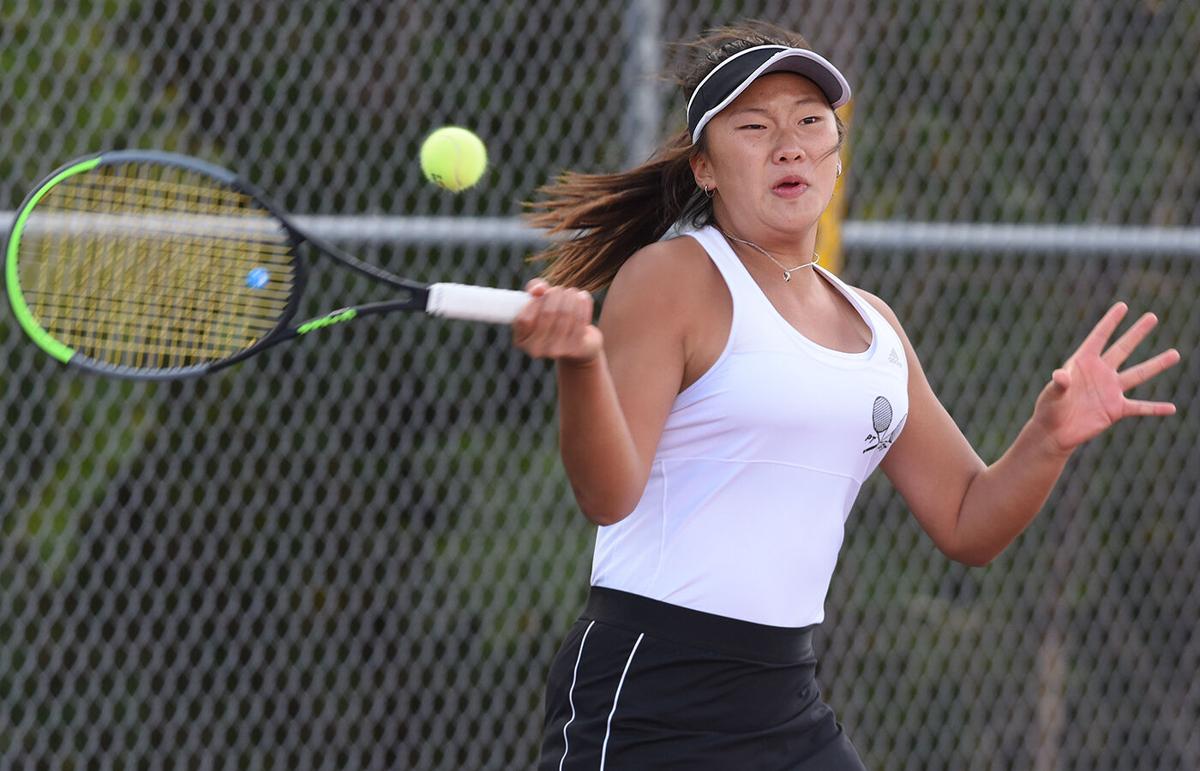 Kat Wang returns a shot during the WPIAL doubles championships. After winning the district title, Wang combined with Marra Bruce for a second straight PIAA championship.

Kat Wang and Marra Bruce stood atop the podium again in 2020 after they captured their second straight PIAA doubles tennis championship.

Kat Wang returns a shot during the WPIAL doubles championships. After winning the district title, Wang combined with Marra Bruce for a second straight PIAA championship.

It was difficult to tell who was more nervous when Peters Township’s Kat Wang and Marra Bruce defended their PIAA doubles title.

After dropping the first set in the Class AAA finals played Nov. 7 at the Hershey Racquet Club, Wang and Bruce roared back and defeated Hana Nouaime and Alice Liang from Methacton, 5-7, 6-4, 6-3, to repeat as state champions.

“The second set,” Wang said. “Every time I breathed I’d listen to my heart beat and it was racing. This was the one we had to win. It couldn’t be on impulse. We calmed down and played our game.”

Tensions, however, peaked for Bruce in the third set.

“I got real anxious,” she said. “Someone was going to take that set.”

The PT pair won it but only after breaking Nouaime’s serve for the first time in the entire match. The duo edged ahead 4-3 by also breaking service. Wang held service then for a 5-3 advantage.

“We were dialed in the last game,” Bruce said.

The entire third set belonged to the tandem.

“Chemistry clicked,” Wang said. “We were OK the first and second set but as we progressed we really understood each other and played to that. We had to stick the volleys and not hesitate on putting away the shots. We could not ease up. We had to continue to push forward.”

Wang and Bruce easily pushed past the competition in their earlier matches. They blanked Samantha Becker and Brooke Lowry, 6-0-6-0, at the Oxford Athletic Club in Wexford then swept Alyssa Mazurka and Madelyn Terraccino from Hazleton, 6-2, 6-2, in the semifinals played in Hershey.

As in 2019 when the pair defeated Radnor’s duo of Kannon Ciarrocchi and Lucy Hedrick, 6-3, 3-6, 6-2, the pressure mounted. Wang and Bruce said neither knew much about Nouaime and Liang as doubles players although they had competed against each other in singles matches.

“They came in as a wild card,” Wang said. “One had really good volleys and the other was good at the baseline. They took advantage of that.

“It got a little stressful and there is a lot of pressure because of having done it before but our experience helped a great deal this time. Although we knew it would be harder this year, we told ourselves, ‘we did it once, let’s do it again.’ Once we won, it was a big relief. Like a boulder had been lifted off our chests.”

While Wang admitted to feeling “lighter” after the win, Bruce felt confident just heading into the finals and being in familiar surroundings. She agreed there was “pressure to repeat” but Bruce felt the most pressure when the tournament moved to Hershey for the semifinals and championship matches.

“It was like a whole new experience again. It wasn’t until the finals that I was more relaxed.”

Bruce said she felt uncomfortable when she and Wang dropped the first set.

“We didn’t take them lightly but we knew we were better than them,” she said.

“Instead of doing the same thing over and over again and it not working, we had to change things up. We were getting frustrated so we channeled our frustrations into the match and pulled it out.”

The redirected energy and alterations paved the way to victory. Wang sliced more and hit the angles. Bruce lobbed more and attacked the net.

“That got things rolling and we kept the momentum going,” Bruce said.

The string of doubles titles for Wang and Bruce may end in 2021 as each go back to singles action. They are the No. 1 and No. 2 singles players respectively at Peters Township. Wang was a semifinalist and Bruce a quarterfinalist in the district but only the WPIAL champion advanced to the PIAA singles tournament this fall because of the COVID-19 crisis.

Next year, Wang will be a senior. She will give her full attention to winning a singles title before she opts for a Division I college to continue her athletic career as well as pursue a degree in medicine.

“That is the main goal then honestly, while I want to play and set a good record, I’m hoping for a different career,” Wang said. “Becoming a doctor is the dream. Later in life, I’ll always have tennis.”

Wang won’t always have a partner like Bruce. She is a sophomore with similar athletic and academic aspirations. Bruce knows that the choice to play doubles again rests with Wang.

“I’ll do whatever she wants. It’s up to her because she’s the older one,” Bruce said. “I’d love to continue because doubles is fun. I would not trade playing with her for anyone else. If we don’t play doubles again, it will be heartbreaking.”

The PIAA titles, however, ease the sting of impending separation.

“This year was more meaningful because the opponents were extremely strong and their were some great battles. But to do this again, especially with a friend like Marra, is definitely surreal,” Wang said. “It’s special.”

“Super surreal,” Bruce said of being a two-time state champion. “It feels great. Considering we were down a set, this is amazing. It took all our energy to get back into the match, play better and win it.”

The junior took runner-up honors after dropping a two-setter, 7-6 (3), 6-2, to Amelia Honer from Council Rock North in the championship match played Nov. 7 at the Hershey Racquet Club.

Gorman advanced to the finals by outlasting Catherine Rabatin from Penn Manor, 6-0, 5-7, 6-2.

Gorman dispatched Trinity Fox from Fairview, 6-0, 6-0, in her opening match played at the Oxford Athletic Club in Wexford.

Gorman was the WPIAL champion this fall. She is also a three-time PIAA qualifier.