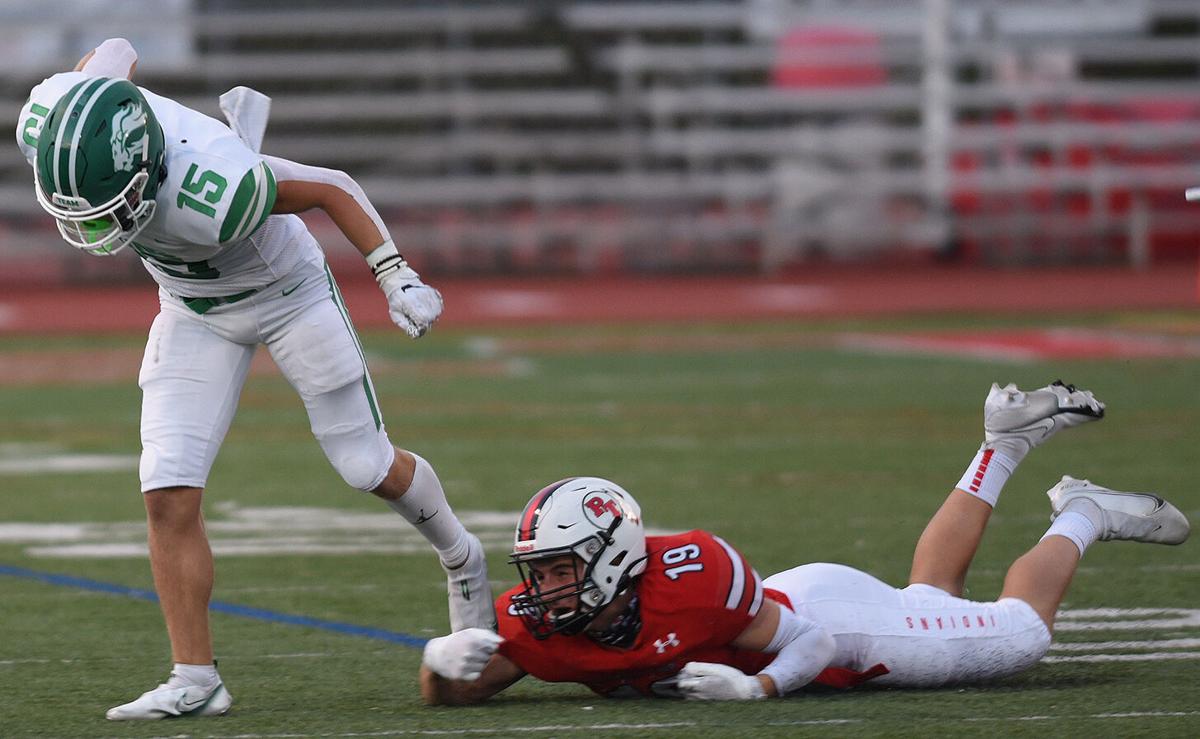 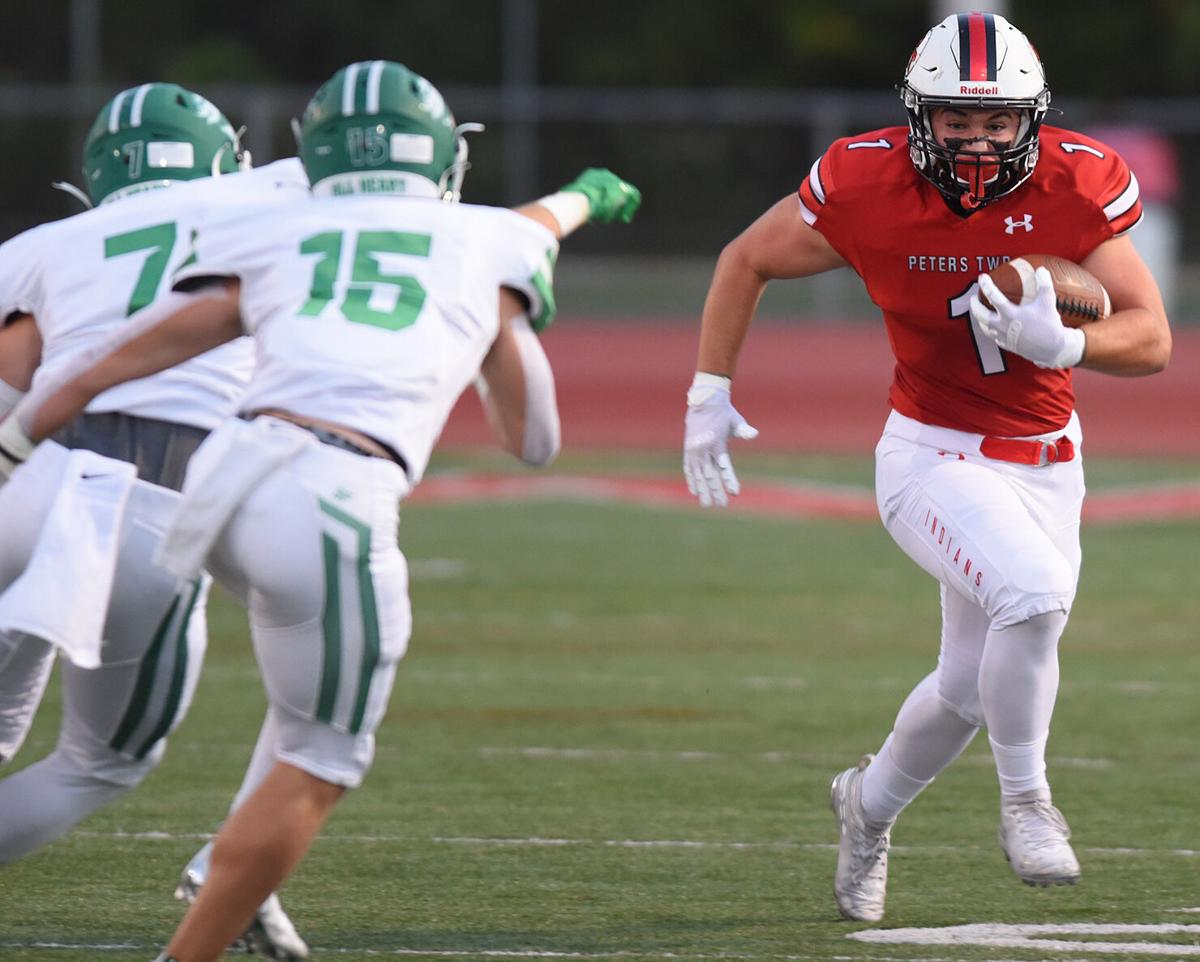 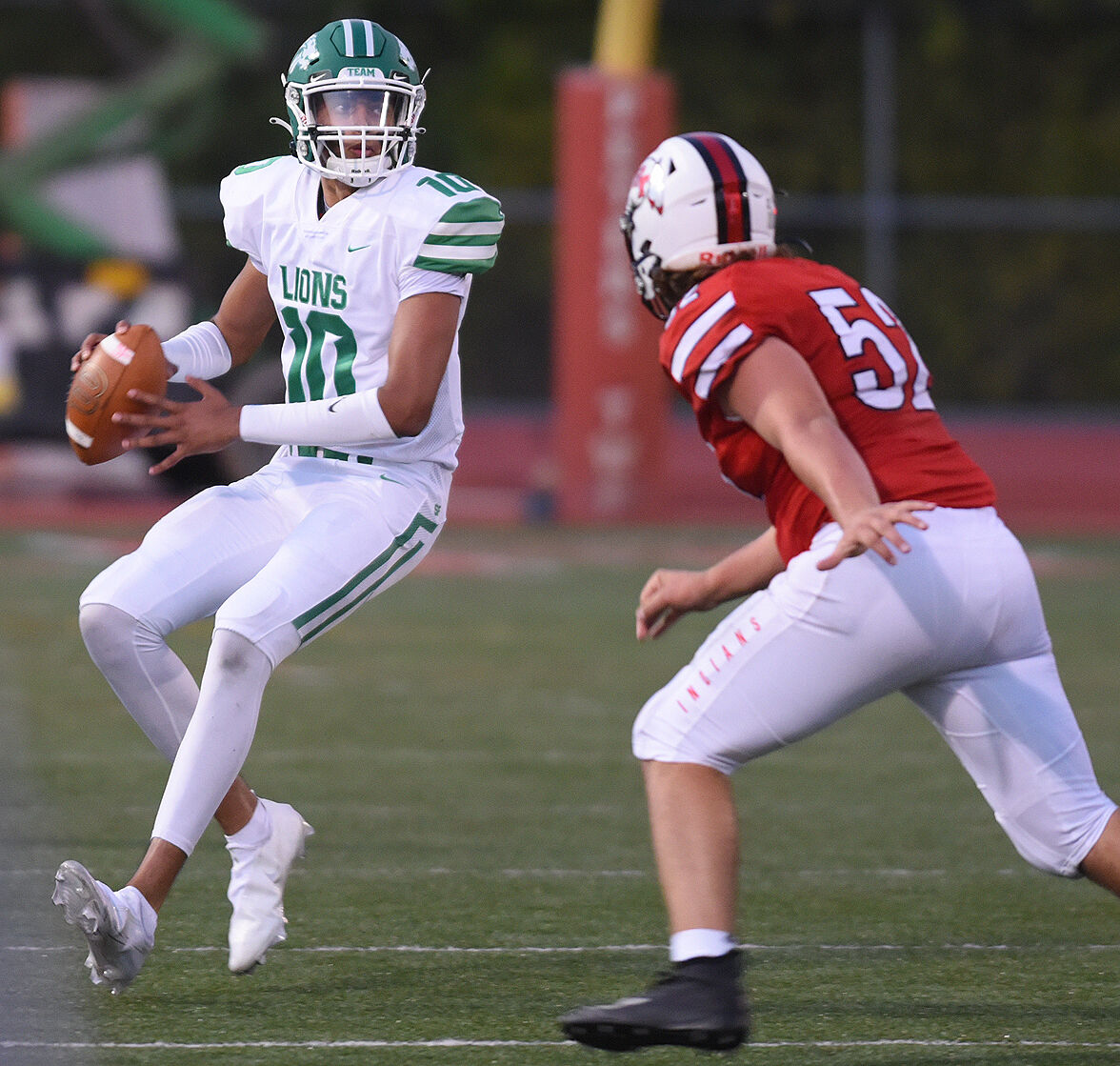 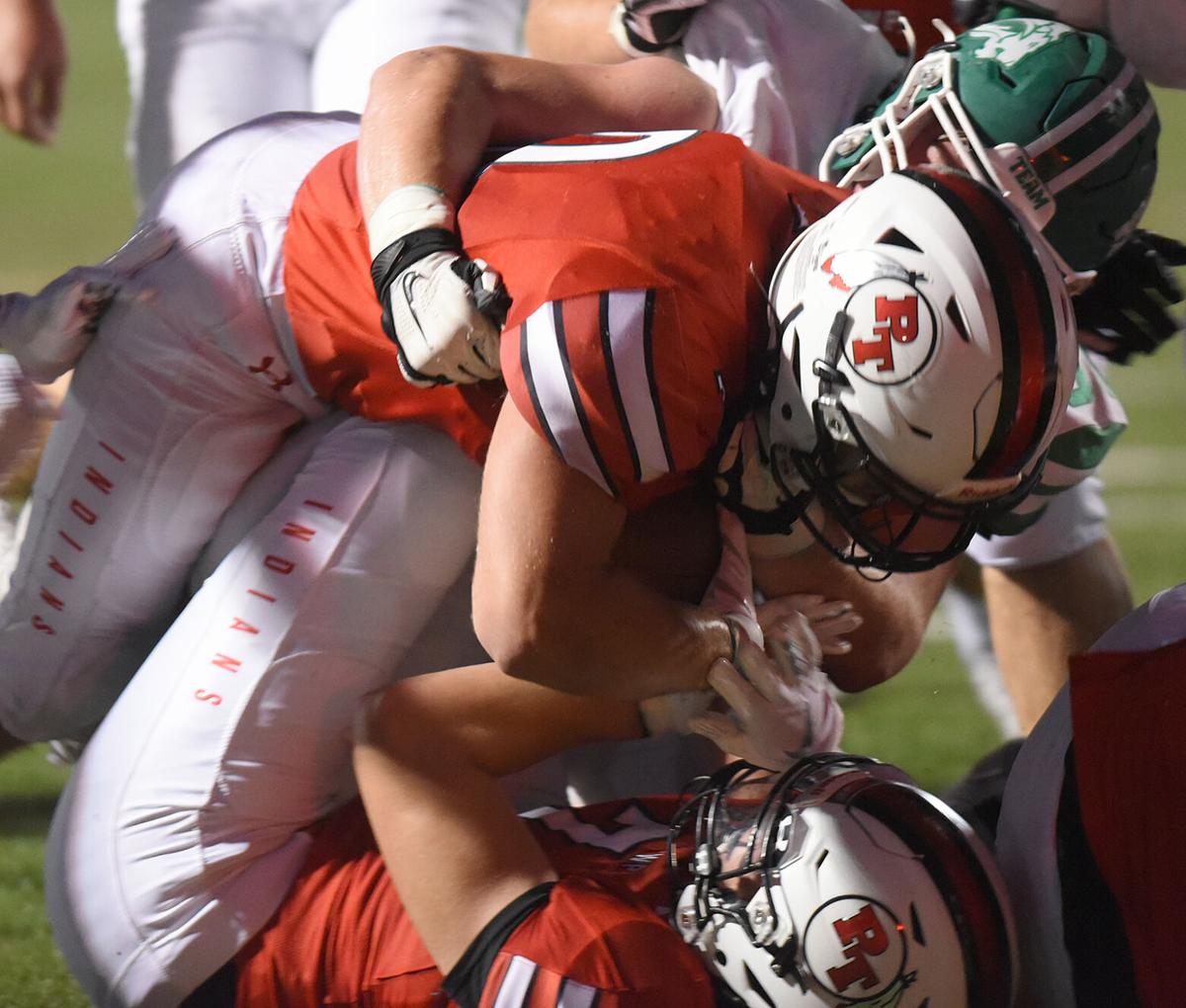 Corban Hondru fights his way into the end zone for a Peters Township touchdown.

Corban Hondru fights his way into the end zone for a Peters Township touchdown.

“In football, there are three facets of the game: defense, offense and special teams and we won two of them,” he added.

Peters Township scored on a 96-yard kickoff return by Donovan McMillon to start the second half. McMillon also blocked a punt that resulted in a touchdown. On the first play of the second quarter, Corban Hondru bulled his way into the end zone.

In addition to multiple sacks and a strip fumble on defense, Hondru also made big plays on special teams. Twice he picked up first down for the Indians on punt situations. Though the gains of six and 19 yards led to no points on the scoreboard, they enabled the Indians to run precious time off the clock in the fourth quarter.

Of Hondru, who is committed to Miami (Ohio) and McMillon, who is bound for Florida, Plack was pleased.

“We count on those guys to make plays,” he said, “but we have a bunch of fine senior football players and some juniors doing nice things.”

Breylen Carrington is one such senior. He helped set up the initial score. With 6:15 to play in the first quarter, he picked off a pass. It was his fifth interception in two games.

That turnover coupled with a fourth-down conversion run by quarterback Logan Pfeuffer and a facemask penalty by the Lions set up Andrew Massucci’s 28-yard field goal, putting the Indians on the scoreboard, 3-0, with 1:43 to play in the first frame.

“Special teams is a third of the game,” agreed South Fayette head coach Joe Rossi. “You get a blocked punt, an interception, a kickoff return. You are not going to win games playing that way.”

The Lions, however, kept up the fight. They dominated after McMillon’s kickoff burst but only had three points to show for it.

Justin Caputo kicked a 21-yard field goal to put SF on the scoreboard with 9:22 left in third quarter.

A drive late in the quarter fizzled on two incomplete passes in the end zone on third- and fourth-and-10 plays from the 23.

Quarterback Naman Alemada was under intense pressure all game, even when the Lions mounted a fourth-quarter drive. However, the PT defense held when it mattered.

After big receptions by Charley Rossi (45 yards) and Joey Audia (30 yards), the Lions stalled at the PT 20-yard line. The defense, led by two sacks by Hondru, held, pushing the Lions back to the 30 and a fourth-and-21 situation.

“You have to stop their offense,” Plack said. “Our guys did a great job of taking the one or two things that their offense is good at and put them in a situation where they are thinking what do we do next.”

Having lost two straight after winning their opener, the Lions go back to drawing board says Rossi.

“The thing I love about our kids is there was no quit in them at all and us coaches have to get back to the drawing board and put them in better position to win,” he said. “It’s ultimately on us to do that.”

Peters Township also will focus on its offense. Vinnie Sirianni led the rushing attack with 69 yards on 18 carries. Hondru had 40 yards on nine carries. He even played the role of quarterback, handing off to Pfeuffer as he gained 33 yards on 13 rushes.

“This was our worst game offensively,” Plack said. “We were out of sorts. We have to be able to move the ball but we weren’t able to do that.”

“I don’t know what is is offensively. We lost some good guys but we did on defense too. We stumbled every drive but defense and special teams played a fantastic game. We are counting on that as we get into the groove offensively.

“It was a win. We accomplished that but we made some glaring mistakes and we need to fix some things.”

Rossi, however, felt the Indians are heading in the right direction.

“They are a couple of plays away from being defending 5A champions. They are finding ways to win. That’s what good teams do.”

In other Class 5A, Upper St. Clair defeated Latrobe, 52-44, and Bethel Park succumbed to Franklin Regional, 14-0. Both were non-conference clashes.

In the BP's loss, Jason Nuttridge completed nine passes for 105 yards. Jack Kirchner was the top target with four receptions for 21 yards.

For the Panthers, who overcame a 10-0 deficit, Jamaal Brown rushed for three scores, measuring 44, 49 and 60 yards. He also hauled in a 10-yard scoring strike from Ethan Dahlem.

Ethan Hiester also had three rushing touchdowns of 11, 49 and 15 yards.

Chartiers Valley won its third game in a row, defeating Hopewell, 39-19, on the road.

Anthony Mackey completed 10 of 17 attempts for 132 yards. He threw two TD aerials of 24 and 18 yards to Jason Bui, who had five catches for 55 yards. Mackey also rushed for one score.

Jacob Salsberry converted three extra points and Mackey combined with Sam Pocci for a two-point conversion. The Colts also picked up two points on a safety.

Mt. Lebanon scored 28-second stanza points and vaulted to victory, 52-26, against Hempfield in Class 6A action.

Alex Tecza rushed for 157 yards while Maurice Plummer gained 109 on the ground. Tecza scored on 5- and 75-yard runs and caught a 51-yard scoring strike from Joey Daniels.

Daniels threw for three touchdowns, two to Eli Heidenreich that measured 23 and 34 yards. He also tossed a six-yard score to Jacob Munoz, who finished with four receptions for 47 yards. Heidenreich also threw a TD pass for 31 yards to Matt Wertz.