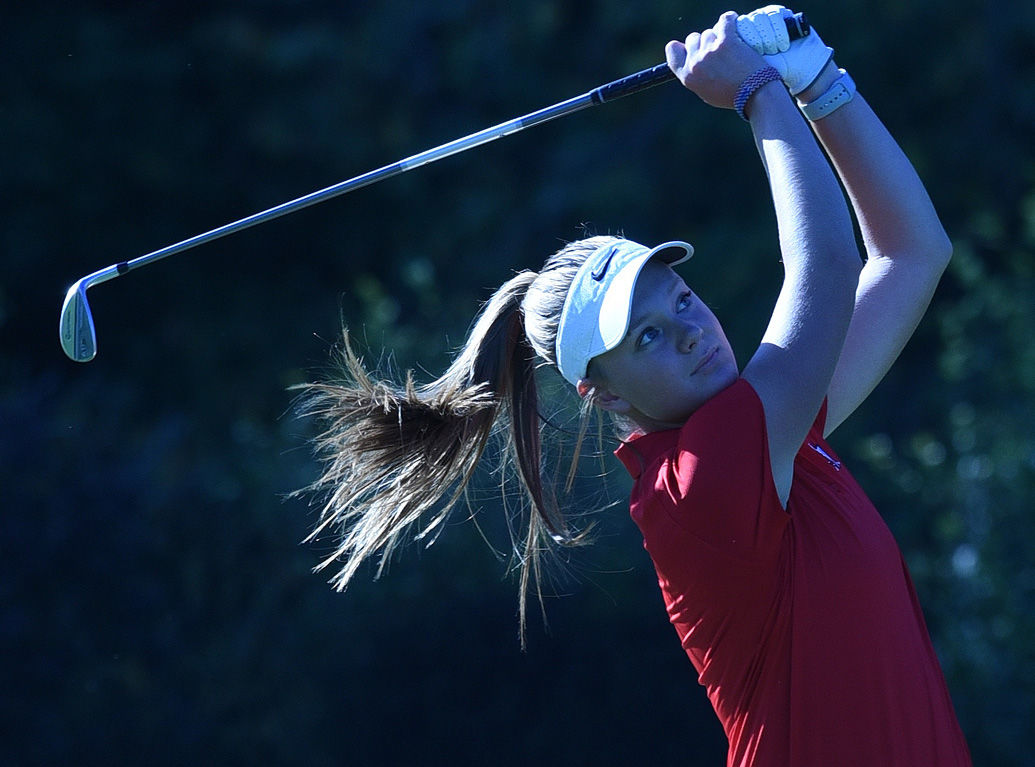 Ella McRoberts watches the path of her ball during championship golf action. The Peters Township junior tied for first in the Western Regional with a 2-over-par 77 and advanced to the PIAA championships set for Oct. 21-22 at Heritage Hills Golf Course in York, Pa. 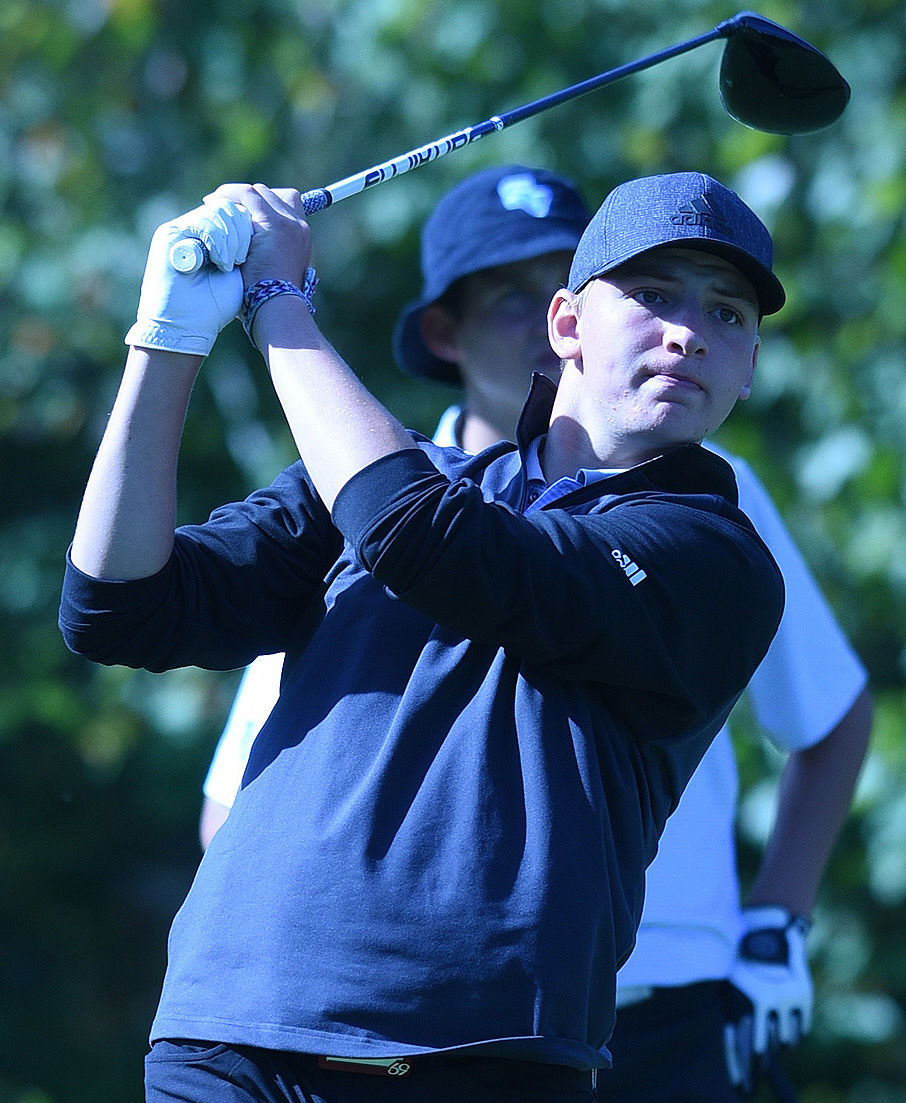 Nathan Piatt watches his drive during WPIAL team championship action. After leading Upper St. Clair to a second-place showing in the match, the senior secured a PIAA individual championship berth with his runner-up performance during the Western Regional held Oct. 15 at Tom's Run Golf Course. The University of Tampa recruit carded a 2-under-par 70, two strokes off the winning pace of Evan Rowane. The Erie Cathedral Prep junior won with a 68. 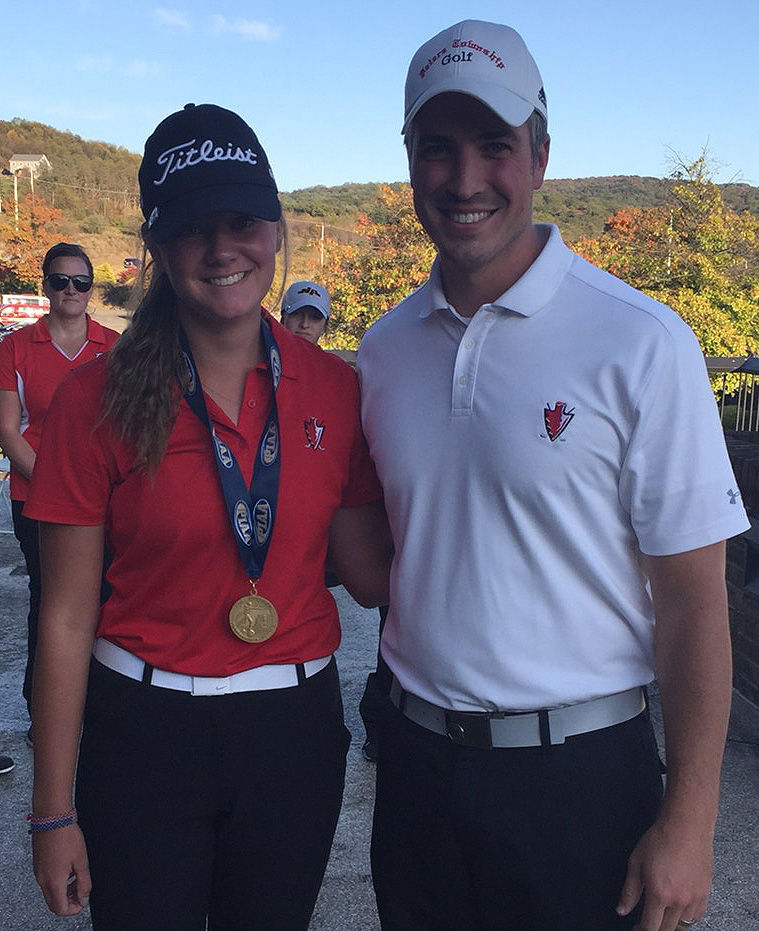 Ella McRoberts watches the path of her ball during championship golf action. The Peters Township junior tied for first in the Western Regional with a 2-over-par 77 and advanced to the PIAA championships set for Oct. 21-22 at Heritage Hills Golf Course in York, Pa.

Nathan Piatt watches his drive during WPIAL team championship action. After leading Upper St. Clair to a second-place showing in the match, the senior secured a PIAA individual championship berth with his runner-up performance during the Western Regional held Oct. 15 at Tom's Run Golf Course. The University of Tampa recruit carded a 2-under-par 70, two strokes off the winning pace of Evan Rowane. The Erie Cathedral Prep junior won with a 68.

Ella McRoberts had her cake and a little icing too when the Peters Township golfer not only qualified for the PIAA Championships but won the Western Regional as well.

During the Class AAA girls qualifier held Oct. 15 at Tom’s Run Golf Course in Blairsville, the junior fired a 5-over-par 77 to earn one of the five state berths. She also tied WPIAL champion Isabella Walter of North Allegheny for medalist honors in the match.

“My goal was just to make it (to the finals). All of this was extra,” McRoberts said of the medal around her neck.

Though she was competing in the regional for the first time in her scholastic career, McRoberts was a rock throughout the competition. She said the only time that she was nervous was on the first tee.

“I just tried to play loose, have fun and see what happened,” said the daughter of Craig and Lori McRoberts. “I noticed the more I did, the better I kept playing.”

McRoberts shot a 40 on the front nine, which included a birdie putt on No. 6, where she used a 9-iron from 120 yards to stick it six inches from the cup. Her 37 on the back nine clinched her spot in the state finals, which are set for Oct. 21-22 at Heritage Hills Golf Resort in York.

“I’ve just been more consistent,” McRoberts said of the difference between making the cut this year over last season. “From hitting more greens and fairways to my putting stroke. It felt better overall.”

The showing was two strokes better than when McRoberts finished third in the WPIAL championships played Oct. 2 at Diamond Run in Sewickley. McRoberts carded a 7-over-par 79 to finish third behind NA’s Walker and Fox Chapel’s Nina Busch. Both girls finished tied in regulation with scores of 76 before Walker won the title after a one-hole playoff.

Busch failed to make the state cut, firing an 84 in the regional. Tori Slagle also missed qualifying for the PIAA championships. The Upper St. Clair sophomore carded an 83 and tied for seventh place with Butler’s Paige Scott and State College’s Riley Kracaw.

Nathan Piatt put himself in a position to become the first state champion in boys golf from Upper St. Clair since Grant Engel accomplished the feat in 2013 when he scored runner-up honors during the Western Regional and qualified for the PIAA Class AAA tournament to be held Oct. 21-22 at Heritage Hills Golf Course in York.

During the qualifier played Oct. 15 at Tom’s Run Golf Course in Blairsville, Piatt carded a 2-under-par and placed second behind Evan Rowane. The Cathedral Prep junior finished with a 4-under-par 68.

According to USC head coach Todd Flynn, Piatt could have come close to 67 had some of his putts dropped. Instead he said they “hung on the cup.”

“I’d have gone crazy,” Flynn said. “That really would have frustrated me but Nathan handled it like a gentleman.

“He was amazing to watch,” Flynn continued. “Nathan played as well a match as I have seen him perform in four years. He was a heart-beat away from shooting the most amazing round I have ever seen.”

Piatt could be saving his best for last. The PIAA championships are his last scholastic match as a Panther as the senior will graduate in June 2020 and continue his career at the University of Tampa.

“I certainly think so,” Flynn said regarding Piatt’s chances for the state crown. “If those putts drop, he has a good chance to win it all.”

Because the PIAA championships are held over two days, Piatt’s odds are even better because consistency is one of his strengths. The four-year starter has been USC’s ace during the regular season with three scores of 31s at Diamond Run and (two) on the Terrace Course at the St. Clair Country Club.

“The PIAA championships being a two-day event helps for sure,” Flynn said. “In a one-day tournament, you have to be on but two days gives you a little leeway. If Nathan shoots like he did at Tom’s Run, he’ll definitely be a contender. With the way he has been playing, there is no reason to think he won’t play like that again. He’s been very consistent.”

Piatt has also worked for this moment. He played two practice rounds at Tom’s Run before the Western Regional. His teammate, Scott Jordan, who also gained a berth in the PIAA championships by tying for seventh place with a one-over-par 73.

“Hard work has been Nathan’s secret to success. In fact, both Nathan and Scott are incredibly hard workers,” Flynn noted.

Regarding Jordan, who was the bronze medalist at the WPIAL championships, Flynn added he played his “normal” round of golf. He “stayed out of trouble from the tee and put his second shot on the green. “He putts then moves on,” Flynn noted.

That’s exactly what Jordan and Piatt have done. They moved on. That fact delighted Flynn.

“I couldn’t be happier because they are darn-nice kids and so polite,” he noted. “They thank me even after practices.”

On a beautiful day for golf, where the greens were perfect and the conditions great for promoting low scores, Ellian Ascencio of Peters Township and Luke Lestini from South Fayette fired 76s. The marks, however, were just off the qualifying standard as the pair tied Hollidaysburg’s Eric Davis for 12th place. The Top 10 finishers advanced to the PIAA championships.

Rocco Salvitti of Canonsburg moved on, however. The Central Catholic freshman tied for third place in the Class AAA boys standings. He carded a 1-under 71.

In Class AA, Stone Ellis of South Park fired an 84 and Seton LaSalle’s Jacob Verner followed with an 86 but neither qualified for the PIAA championships.