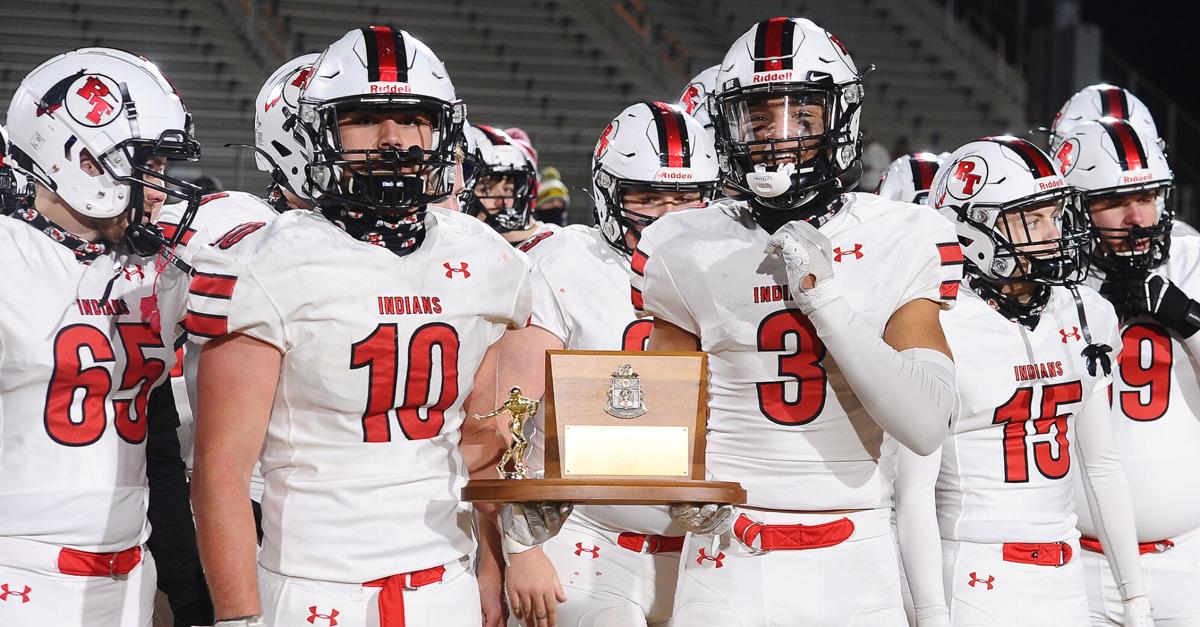 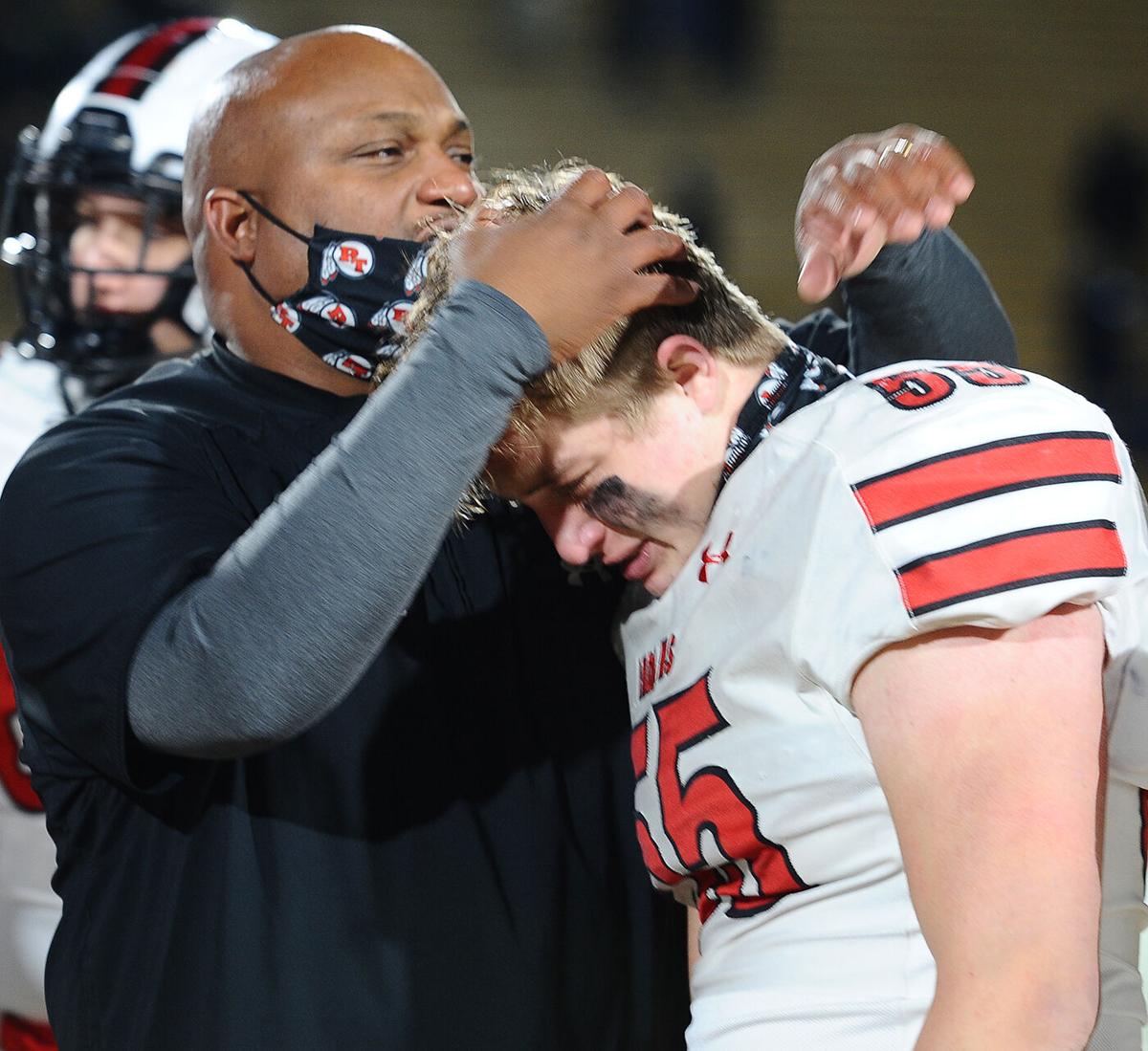 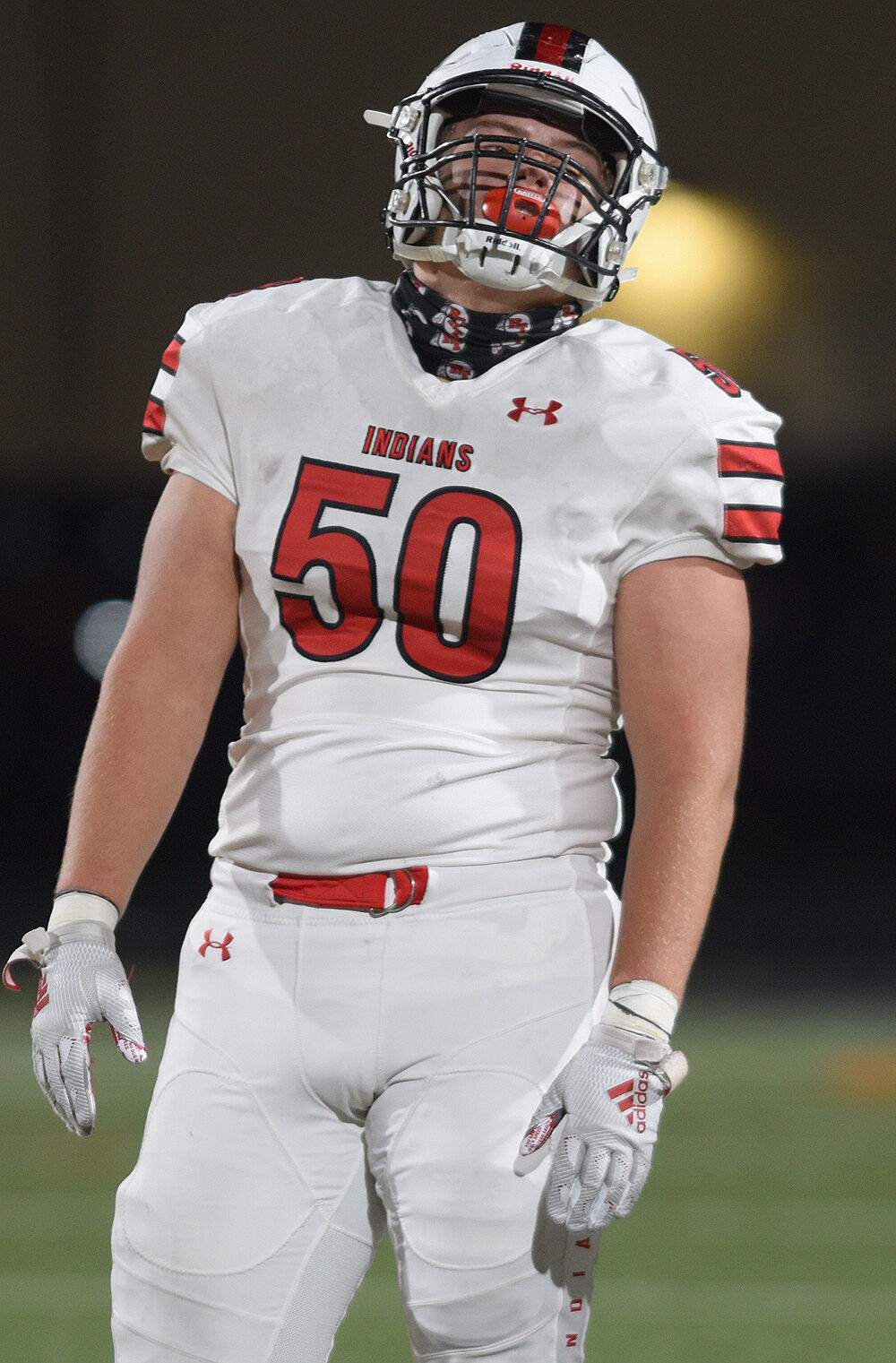 Austin McKinnon despairs as the seconds tick away during Peters Township’s 35-0 loss to Pine-Richland in the final. 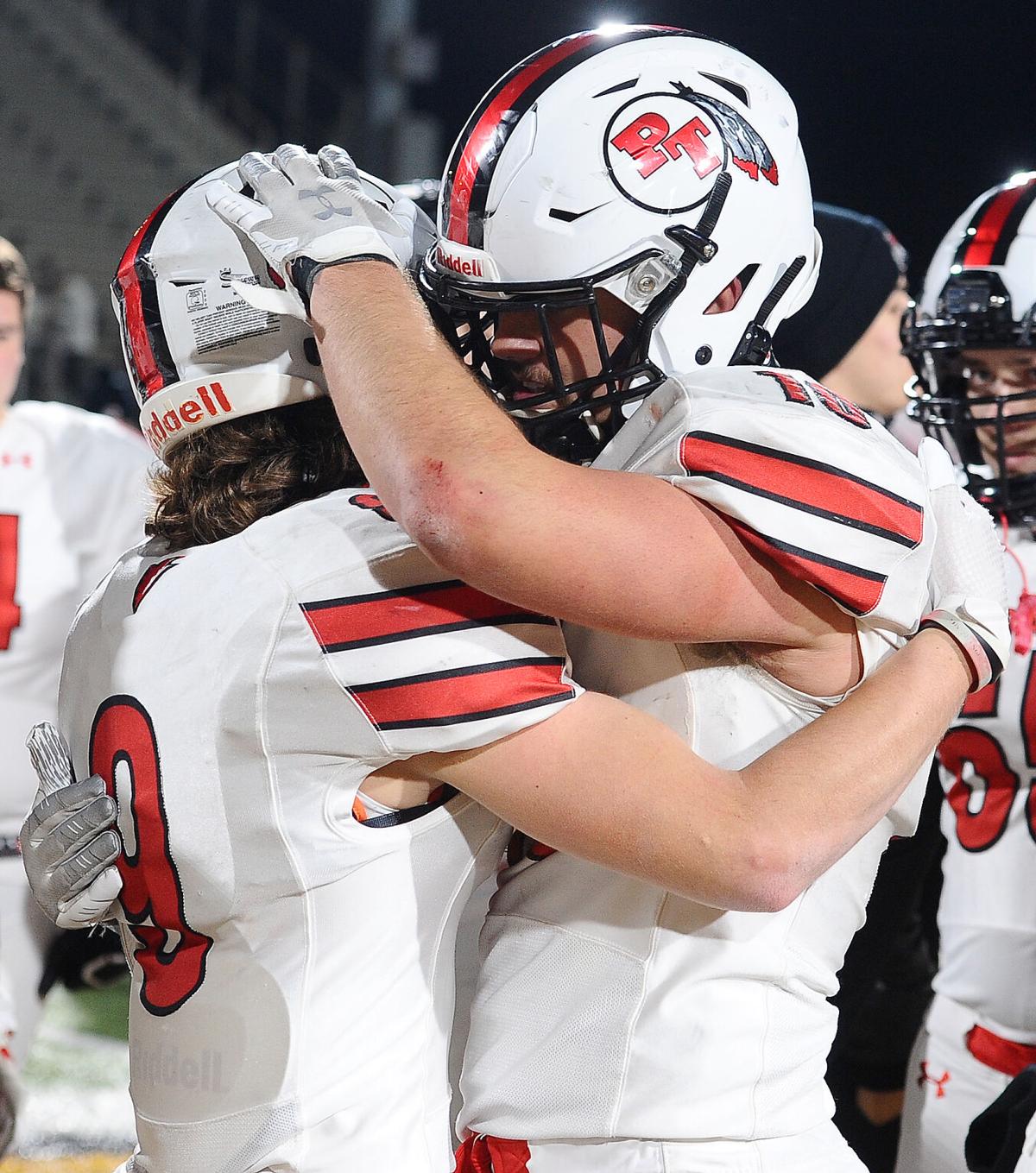 Corban Hondru, right, and Lucas Cullen embrace after their high school careers came to an end when Peters Township dropped a 35-0 decision to Pine-Richland in the WPIAL Class 5A championship game. 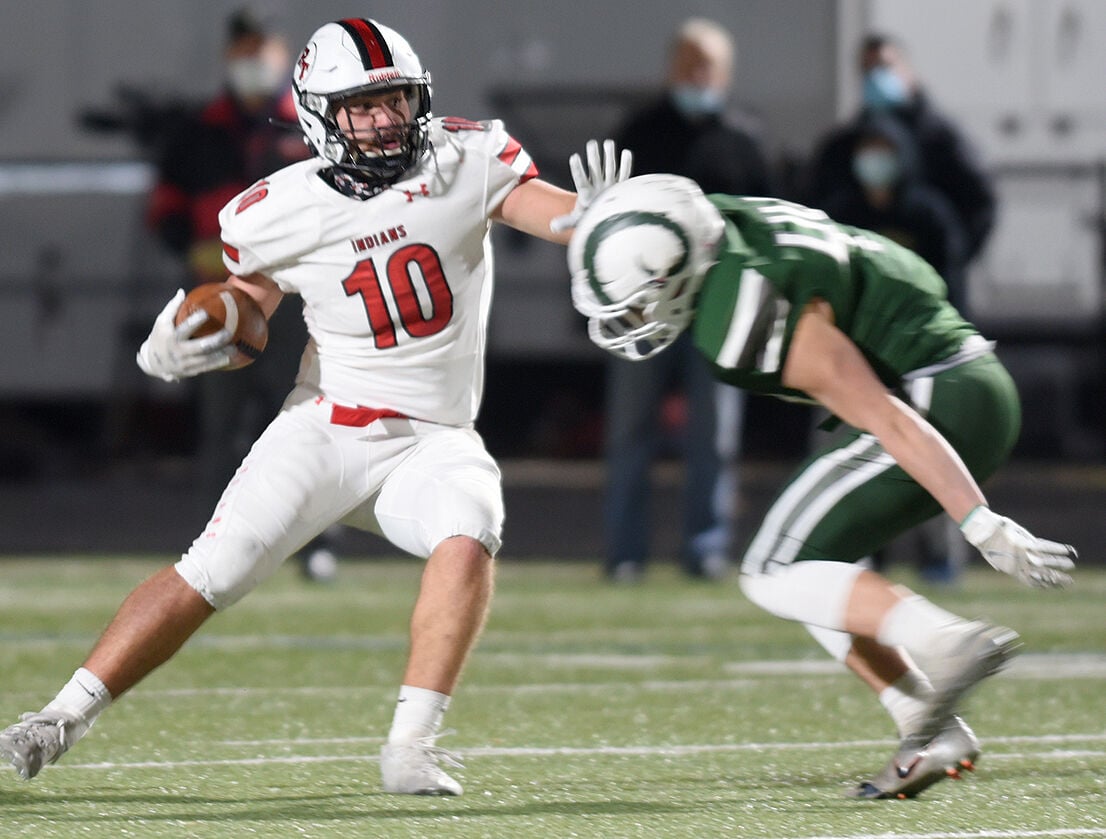 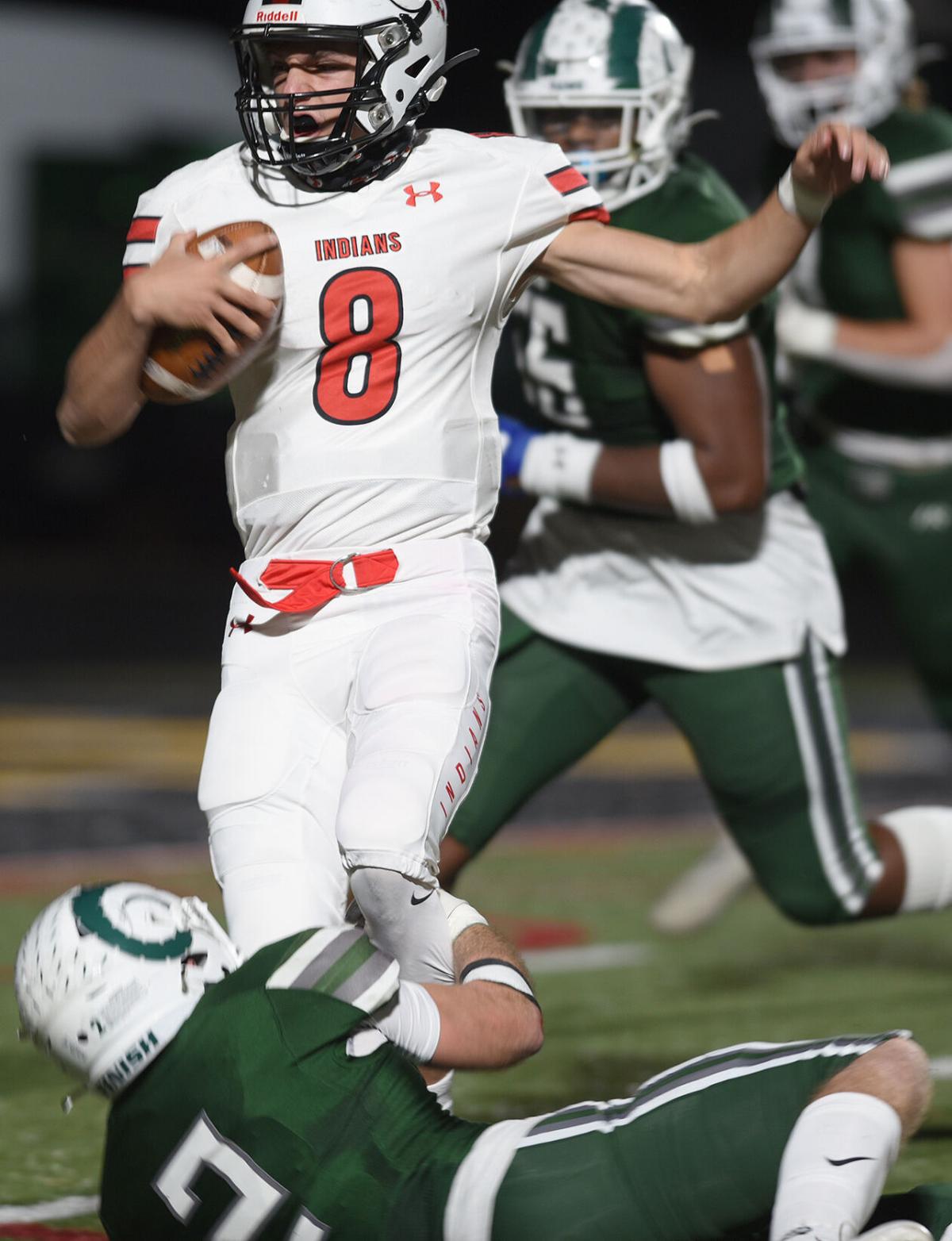 Peters Township quarterback Logan Pfeuffer (8) gets pulled down by Caden Schweiger (2) of Pine-Richland before he could reach the end zone during the first-half of the WPIAL Class 5A championship game. 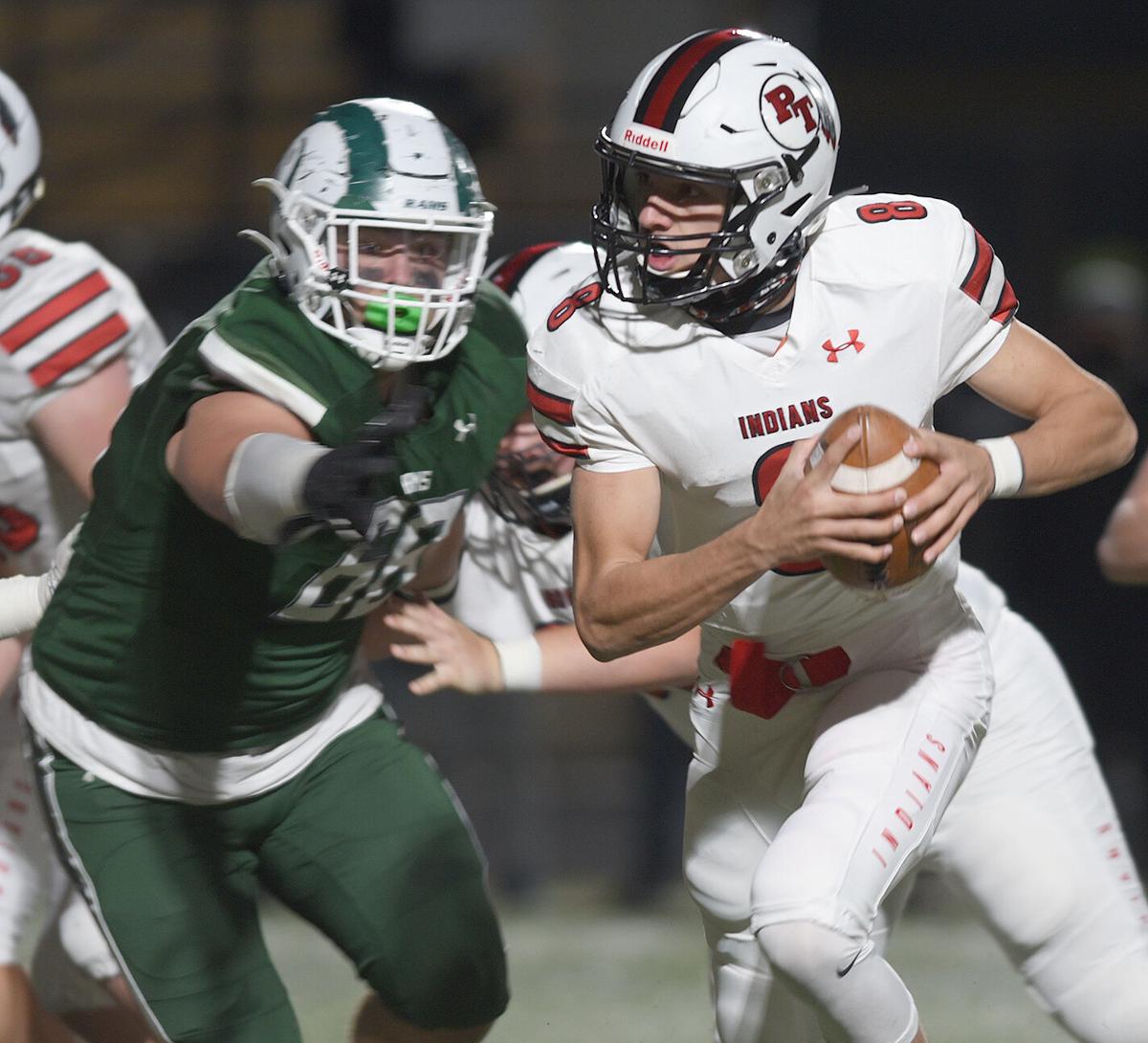 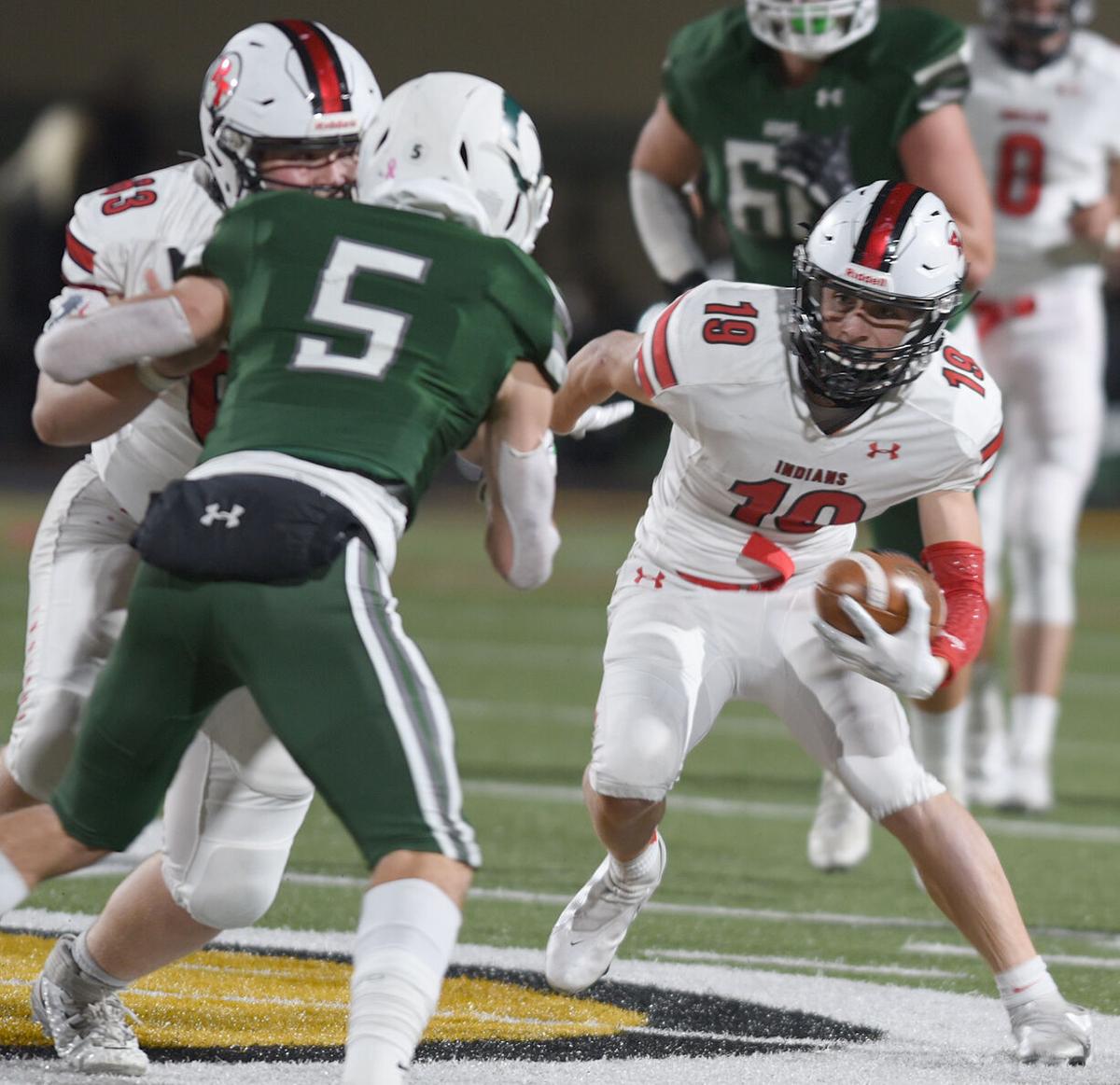 Austin McKinnon despairs as the seconds tick away during Peters Township’s 35-0 loss to Pine-Richland in the final.

Corban Hondru, right, and Lucas Cullen embrace after their high school careers came to an end when Peters Township dropped a 35-0 decision to Pine-Richland in the WPIAL Class 5A championship game.

Peters Township quarterback Logan Pfeuffer (8) gets pulled down by Caden Schweiger (2) of Pine-Richland before he could reach the end zone during the first-half of the WPIAL Class 5A championship game.

For the second straight season, the Peters Township football team came up short of winning a WPIAL title, falling to Pine-Richland 35-0 in the Class 5A championship game played Nov. 14 at at Wright Field on the campus of North Allegheny High School.

The disappointment of the loss, however, could not erase the Indians’ accomplishments during a challenging 2020 campaign.

While the coronavirus pandemic raged, the Indians went 8-0 in the regular season and won a third consecutive conference championship.

PT secured a No. 3 seed in the WPIAL playoffs and secured home-field advantage. The Indians also avenged last year’s WPIAL championship loss to Gateway with a thrilling, come-from-behind 20-19 victory in the semifinals.

“It was another fantastic season for our program, with a lot achievements that our players and community should feel proud of,” said PT head coach T.J. Plack.

“In a season like no other, having games suspended, and the unknown if we would finish the season, our young men were able to prioritize and focus on the task at hand each and every week. I am proud of our players and coaches for all their hard work and resiliency.”

The team’s 16 seniors demonstrated the most flexibility as they labored to turn around a program that suffered through a 1-5 conference slate and 4-6 season in the fall of 2017.

“It’s no secret why our program has been successful. We will graduate another fantastic group of seniors that have been with us throughout their entire high school career,” Plack said. “They will be missed, but each are beginning a new exciting path in their lives.”

McMillon and Hondru definitely are entering a thrilling phase. Both are FBS recruits.

McMillon will begin his collegiate career in January as he heads to Florida. The 6-2, 200-pound free safety was courted by the Gators for his defensive skills, but was also the Indians’ third-leading receiver this season and return specialist.

Hondru is committed to Miami (Ohio). A versatile player – he punted, caught the decisive touchdown against Gateway and was a critical cog in the Indians’ rushing attack. Hondru is a 6-1, 230-pound linebacker.

Hondru and McMillon served as team captains along with Peyton. A senior, Peyton suffered a season-ending injury for the second year in a row after rushing for 112 yards and a score in a 28-21 win against USC on Oct. 1.

Plack said the three were elected captains by their teammates for a reason.

“They have continually exemplified all the qualities of the type of player we want and have at Peters Township,” he said. “These three, among others, were tireless competitors on and off the field. As coaches, we truly appreciate everything they have done to promote and improve our program.”

Pfeuffer certainly served to better the program. He finished his career as the school’s all-time passing leader. This season, he completed 99 of 148 passes for 1,254 yards and nine touchdowns. He was 15 of 25 for 144 yards against the Rams, including five connections to Hondru for 66 yards.

Additionally, Dicio, Spangenberg, McKinnon and Wente powered PT’s success. The four excelled for years in the trenches for the Indians.

Plack anticipates the example set by the outgoing senior class will propel PT well into the future.

“I just hope our younger players have noticed the dedication, trust of the process, ability to be coached, that our seniors exhibited throughout this season,” he said.

Perhaps the Indians are on the path to greatness similar to the Rams. Pine-Richland’s championship run was it’s fifth since the turn of the century and third in four years.

The Rams built ups a 28-0 halftime lead and cruised to victory on the arm and legs of Cole Spencer. The Penn wrestling recruit passed for 131 yards and rushed for 103 more. He scored on 1- and 33-yard runs and connected with Eli Jochem for a 28-yard scoring strike.

Jochem had 8 receptions for 71 yards. He is Spencer’s top target, having pulled in 50 passes for 981 yards and 17 touchdowns this season.

“They are relentless, very talented at every position, well coached,” Plack said of Pine-Richland. “They played with enthusiasm. An exception team.

Plack said the Rams were dominant against the Indians because they won the battle up front.

“They were physically dominant blocking up front and on the perimeter,” he said.

“They have talented guys at every position,” he said. “They won the war up front and that really hurt. Hats off to (Pine-Richland). They have a very good team.”

Despite the graduation losses, PT plans to contend next season. The Indians return their leading rusher in Nico Pate as well as kicker Andrew Massucci and center Anthony Brunette on offense. Massucci was one of the team’s leading scorers with three field goals and 14 extra points, including the game-winning kick against Gateway.

Pate was also a force at linebacker along with Luke Petracrca, a 6-3, 210-pound junior. Also returning to a defense that allowed 10.9 points per game before holding the Rams to 15 points below it’s 50.5 average are strong safety Jacob Macosko, cornerback Sam Miller and lineman Dante Lahet.

“Our expectation,” Plack said of his underclassmen,”is always to remain highly competitive in everything we do, strive to win each week, and promote and encourage enthusiasm and positivity throughout the program.”