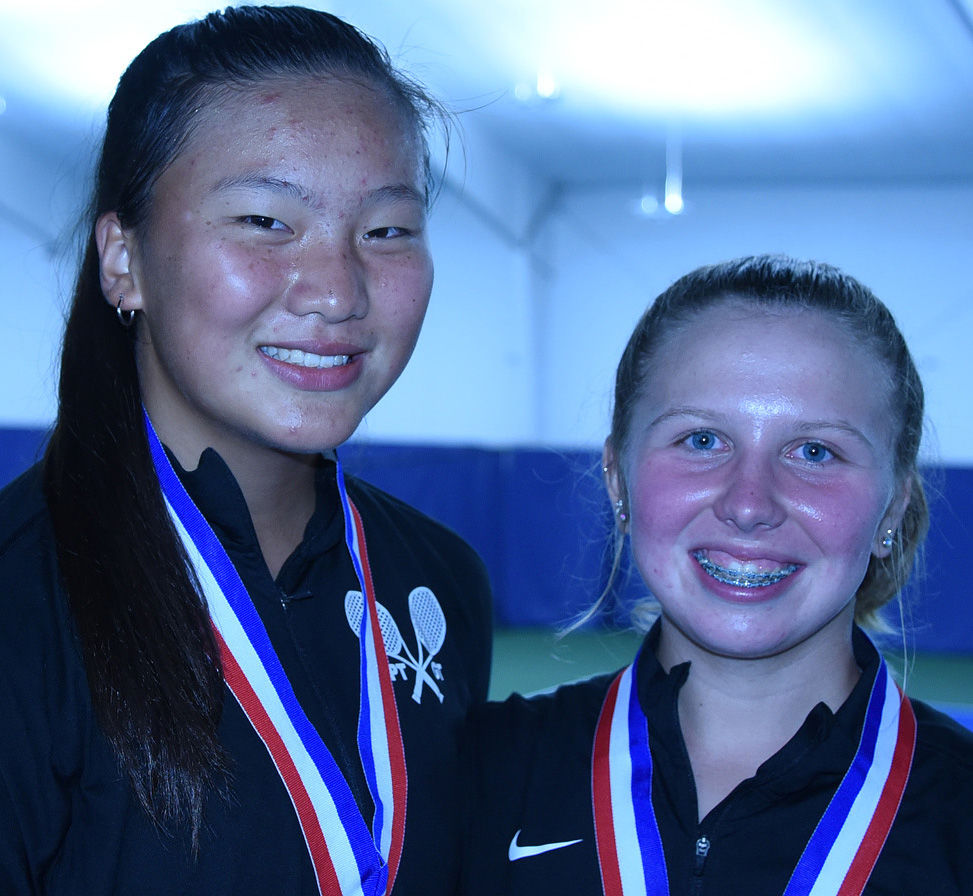 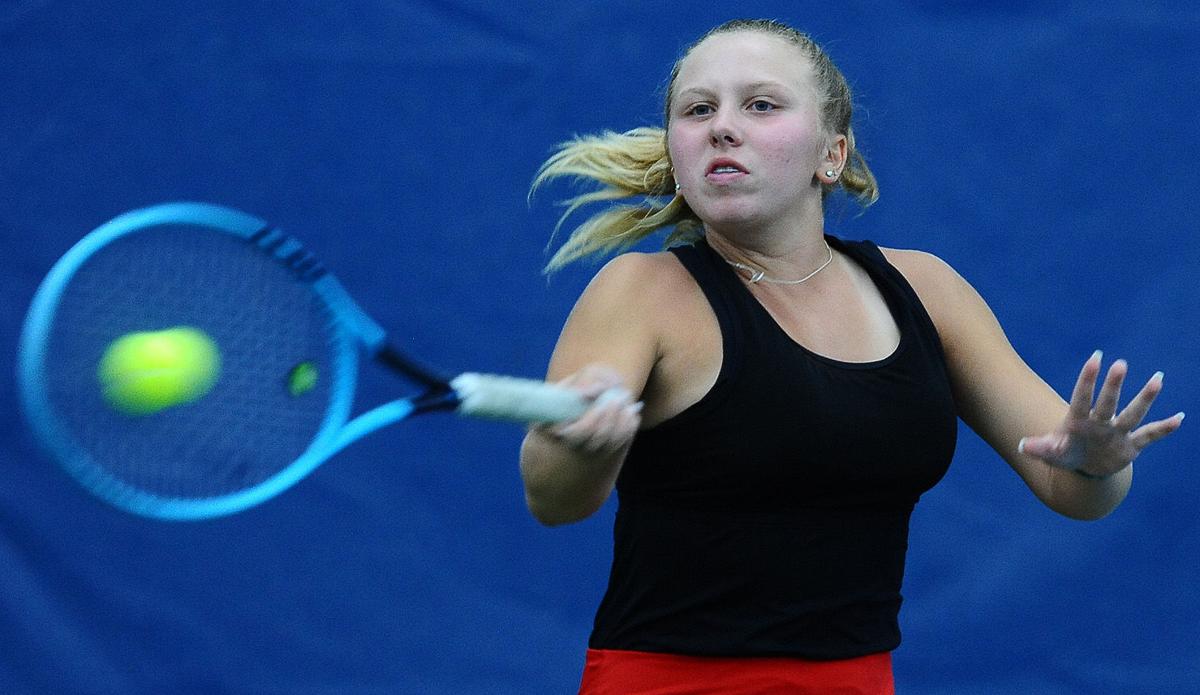 Marra Bruce returns a forehand. The Peters Township freshman added a PIAA doubles title to her collection of medals recently. She finished the fall tennis season also with WPIAL team and doubles championships. 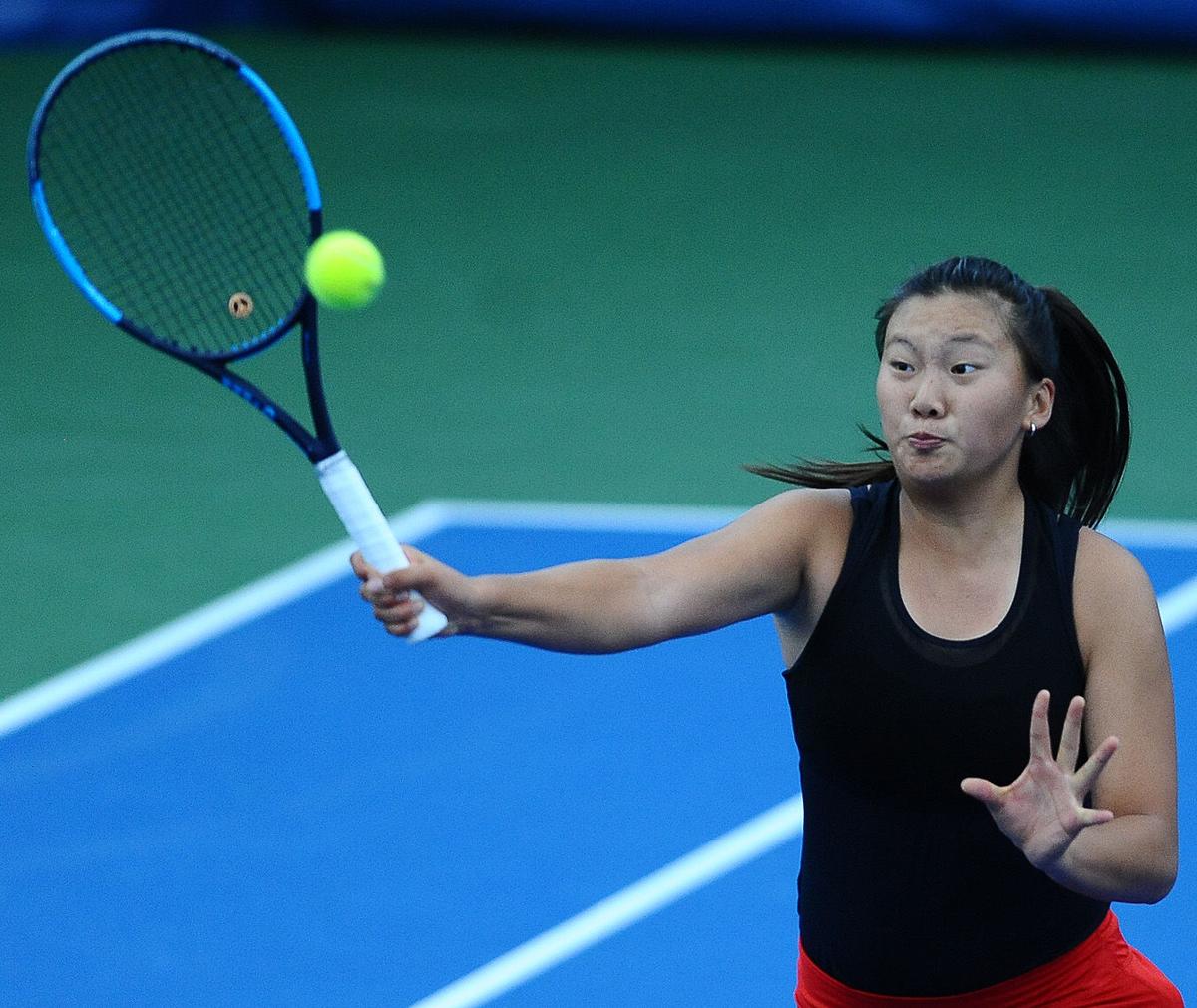 Marra Bruce returns a forehand. The Peters Township freshman added a PIAA doubles title to her collection of medals recently. She finished the fall tennis season also with WPIAL team and doubles championships.

When Marra Bruce and Kat Wang set out to win a PIAA title in tennis, the Peters Township pair sought the advice and help of a couple of experts — their relatives.

Bruce’s mother, Marcie, was a state champion at Mt. Lebanon High School before excelling at the College of Charleston. Her brother, Connor, combined with Ellian Ascenzio for a state doubles championship back in May.

Meanwhile, Wang’s older brother, Nathan, played line one doubles for the Indians before he took his talents to Washington and Jefferson College. The 21-year-old netter is in his third year at W&J College.

Bruce and Wang acknowledged their siblings played a tremendous role in preparing them for the state tournament where they defeated Radnor’s duo of Kannon Ciarrocchi and Lucy Hedrick, 6-3, 3-6, 6-2, in the Class AAA championship match played Nov. 2 at the Hershey Racquet Club.

While they admitted that neither one of them can beat their older sibling one-on-one or as a tandem, Bruce and Wang said they benefited from their pre-state practice sessions, which included plenty of pointers and welcomed advice.

“A lot of times we’d go to the tennis center and play against each other. He usually wins,” added Wang, “but I’d say mainly my brother helped me a lot. He was there the entire time during our WPIAL run and was able to analyze and make improvements to my game during our practices.

“Actually, there were days that Marra and I played against our brothers. It was nice of them to help. It’s rare to see big brothers helping their younger sisters so I just want to thank them for being so supportive.”

For Marra, big bro is more than supportive.

“Connor’s an inspiration,” she said. “We don’t really play sets. If we did, he would win. He coaches me to help me.”

While Connor won his title as a junior, Marra has one distinction over him. She has him beat medal-wise with both a WPIAL doubles and team title along with her recent state championship.

“It’s a pretty awesome feeling knowing that we both have state titles,” said Connor. “Not many people can say that themselves and their sibling owns states, let alone their mom, too,” he added of Marcie’s accomplishment. “It is a surreal feeling.”

Bruce is a freshman and Wang is a sophomore, so both still have several seasons of high school tennis remaining to continue their success on the court.

Normally, Wang, who wants to become a doctor, and Bruce are singles players. Bruce is No. 1 and Wang is No. 2. Paired together often in tournament doubles, the two aspire to win individual titles. They both said they would like to go to states next year as singles players.

“The goal is to try to make it in singles. Just get through the WPIAL and try my best,” said Bruce, “but we know we can fall back on doubles. I like playing doubles because it’s like being on a team. It’s not all on you. We both have equal parts on the court. It’s nice to have that one person backing you up.”

It’s nice, too, that the pair are friendly rivals. They have build up solid friendship and their chemistry is such that they easily can tell each other what is on their minds.

“It’s a healthy competition,” Wang said. “Last year there wasn’t much competition (for me) so it’s nice to have such good competition within the team.

“Next year, there’s a great possibility we’d play each other but I’d be happy for her if she wins,” Wang continued. “Once again it’s competition and competition brings out the best in me. It fills my motivation.”

At the PIAA championships, Wang and Bruce were certainly motivated as they played against a duo from the team, Radnor, that eliminated Peters Township from the state tournament. Fox Chapel, which the Indians beat for the WPIAL title, ended up winning the PIAA team crown.

Winning the PIAA doubles title was not without suspense.

After breezing through the first two rounds of competition with wins against Conestoga Valley’s Jacquelyn McBride and Rachel Eby, 6-1, 6-0, as well as Unionville’s Saanvi Gang and Faith Ilgner, 6-1, 6-1, Bruce and Wang dispatched Avery Palandjian and Scott Reynolds from Mannheim Township, 6-3, 6-4, in the semifinals setting up the showdown with the Radnor twosome.

“The tournament got progressively harder,” Bruce said. “The first two matches weren’t too difficult but the semifinals was a battle and the finals were definitely the hardest match, especially since the week before I had played Kannon and did not beat her.”

Bruce and Wang, however, jumped all over Ciarrocchi and Hedrick. After winning the first set, they jumped ahead, 2-0, but lost the second set.

“We played well enough to grab the first set and close it out but we crumbled and made too many errors in the second,” explained Bruce. “We knew these girls would not let up because it’s the championship match. We got tight because we were up so much and then couldn’t put balls away.”

“Even though we won the first set, we hadn’t found our groove,” Wang said. “Our match in the morning hadn’t gone as well as the first two rounds and we were nervous. Things went downhill in the second set. We wondered ‘what are we doing?’ We knew we could play so much better.”

In the third and decisive set, Wang and Bruce put their opponent away with a decisive 6-2 win.

Wang noted that having helped her squad win the WPIAL team title on her last match was “unreal” there is nothing better than a PIAA championship.

“Winning states was incredible. To be able to do this with both of our families here was very nice. Something we’ll remember for the rest of our lives.”