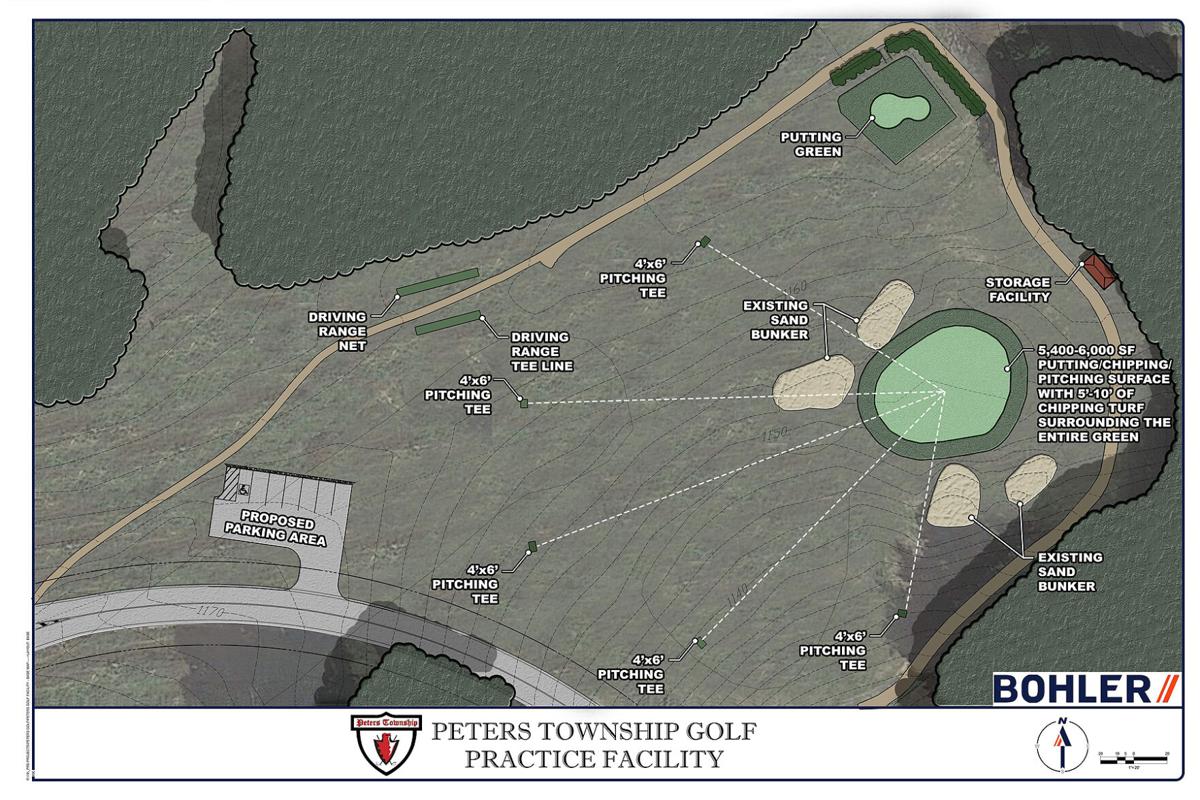 A rendering of the Peters Township golf practice facility 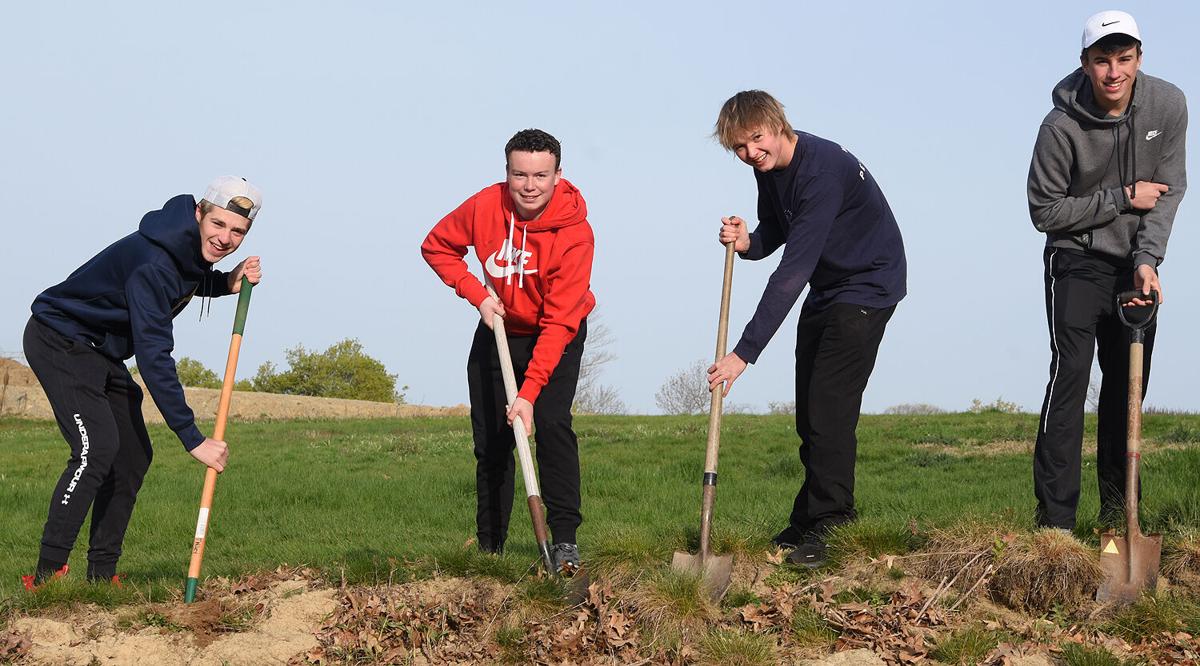 Austin Malley, Brendan Kern, Jake Langlois and Sean McFarlin help clear weeds and grass from a sand bunker during a clean-up effort to prepare the site of the Peters Township golf practice facility. 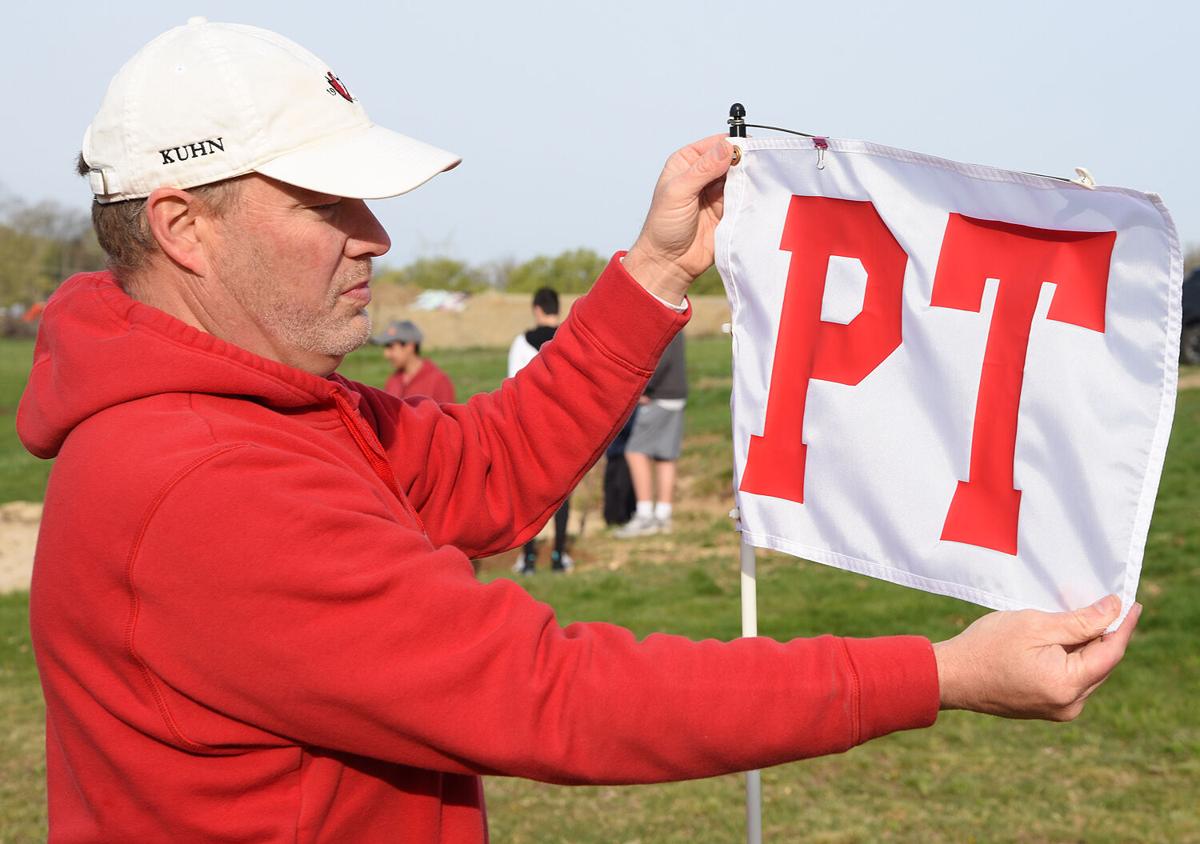 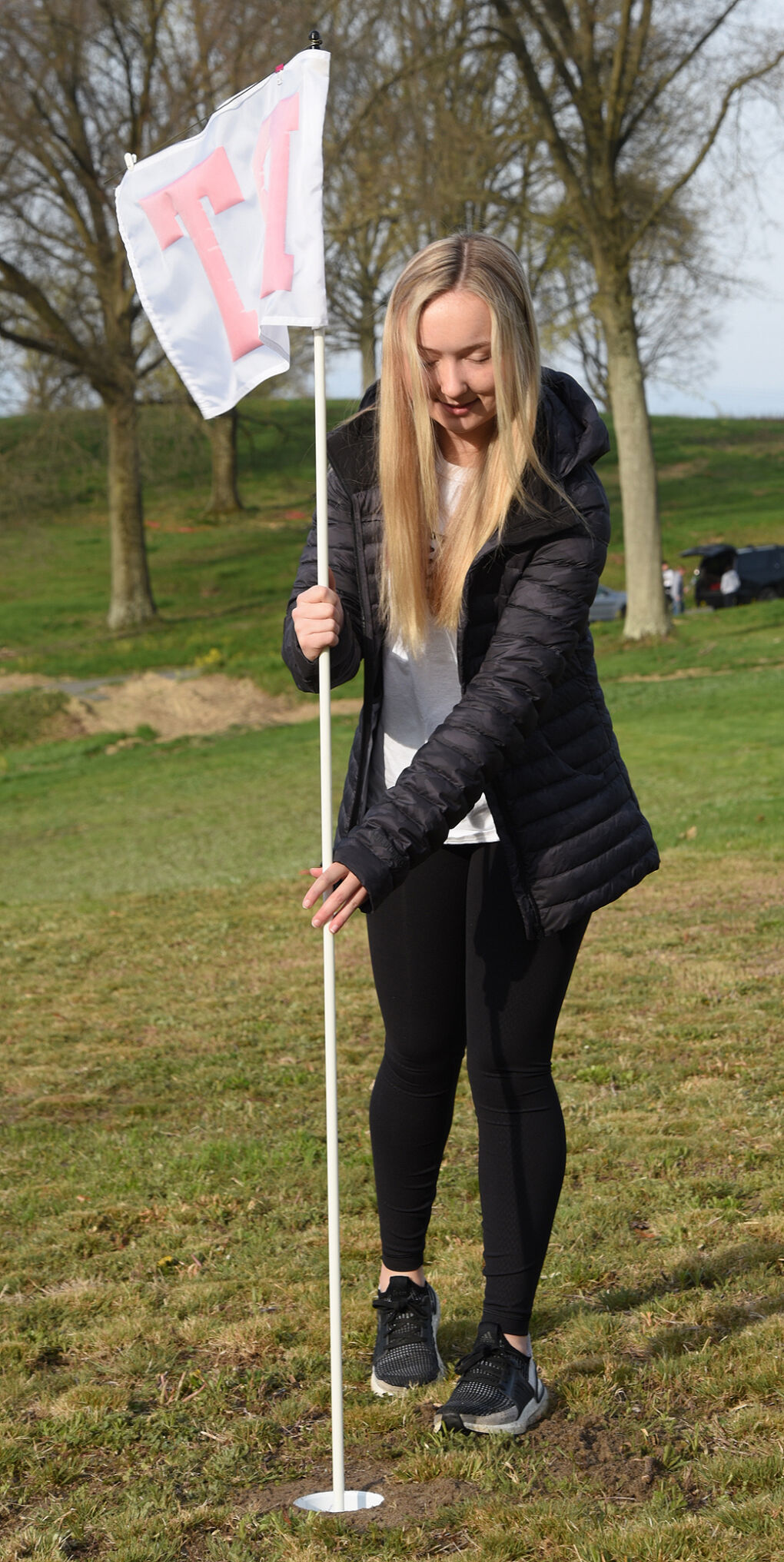 Delaney Kern plants the flag in the hole on what will be the practice green at the new Peters Township golf practice facility. 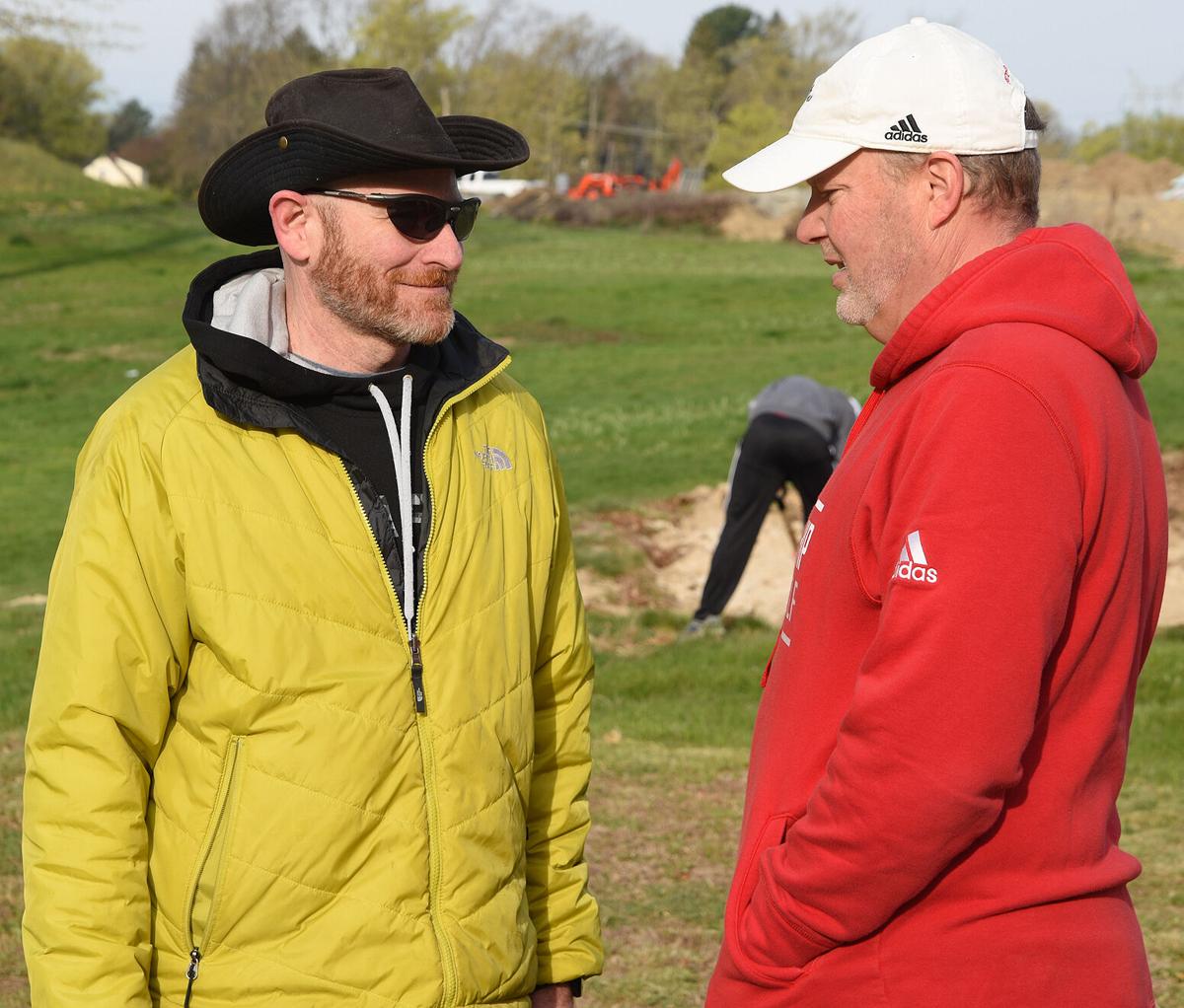 Ed Bockman and David Kuhn discuss work details during a clean-up session of the site being prepared for the Peters Township golf practice facility.

A rendering of the Peters Township golf practice facility

Austin Malley, Brendan Kern, Jake Langlois and Sean McFarlin help clear weeds and grass from a sand bunker during a clean-up effort to prepare the site of the Peters Township golf practice facility.

Delaney Kern plants the flag in the hole on what will be the practice green at the new Peters Township golf practice facility.

Ed Bockman and David Kuhn discuss work details during a clean-up session of the site being prepared for the Peters Township golf practice facility.

On April 24, however, he found himself manicuring a sand bunker near the No. 7 hole on the site of the former Rolling Hills Country Club.

Malley was part of an army of Peters Township volunteers preparing a site on the backside of the newly-constructed high school for a practice facility that will benefit the golf teams, students and citizens.

“It’s going to be great,” said Malley, a sophomore. “I’m really excited because we are going to use this facility a lot and it’s going to be a great resource for the township. I’ll work to make it become a reality.”

Ella McRoberts worked hard, too. A senior, who will golf at Denison University next fall, she shoveled dirt and weeded.

“It’s a great project,” she said. “Since I am graduating, I probably won’t be able to use it as a high school golfer but I am very excited for the future generations to be able to use this. It’s a great space and its a great opportunity for us to take advantage of.”

When she started golfing, McRoberts took advantage of events and tournaments held at Rolling Hills Country Club. She recalled having one of her best rounds on the former course.

“I only played the front nine but it was definitely memorable,” said McRoberts, who finished fourth in the WPIAL and earned all-state honors last fall. “I remember I lost a ball so that was the first time I had to deal with a rule situation.

“You could lose a ball or two out there,” she added. “So I had to figure out what to do.”

When the school district and the township purchased the property in 2016 for a new high school and park, PT golf coach David Kuhn knew what to do with a portion of the former golf course. He envisioned a practice facility for the site, which supported Peters Township athletes from 1968-2015.

“We built a high school on a country club but I still see the golf course,” said Kuhn, whose classroom overlooks the old No. 9 green.

“My thinking from the beginning was why not save some of the golf course because of its long, long history. To preserve some of that history to me is part sentimental because I can tell you shots, matches, this green or that play.”

Kuhn said that when he is walking down the hallway in the new high school students ask him where they are on the old course. Kuhn said his responses vary from we are in the rough on 13, or where Jimmy Ellis sank a putt to finish with a school-record 30.

“So many memories,” he recalled.

Kuhn even remembered starting a text thread with his former players when he sent them a photograph of his view on his first day in the new building. He sent it out to over 60 alumni spread out all over the country. The text relay lasted for two days.

“It was a tearjerker,” Kuhn said. “Unbelievable. I had guys saying, ‘my dad’s no longer with me and I remember him standing by that bush, waiting for us to come down and finish on No. 9.’ Others texted, ‘I remember being with my friends and just how great a time it was and now that I have my own kids...’ That was the coolest thing.

“Everybody had all these fond memories. Yes, the competition was part of it, the championships part of it, but it was really the camaraderie, the memories, the family involved. As crazy as that sounds, to me that was the best moment because that is what you take away from it in the end. Those relationships with people.”

In 22 years, Kuhn led the Indians to five WPIAL titles and have had 14 top 3 finishes in the district. They have participated in the district championships 17 out of the past 18 seasons.

2015 also marked the second WPIAL team title in a row for the PT boys team, which fielded a line-up that included nine Division I players during that span.

“Since I came here my goal for the program has been consistency,” Kuhn said.

Ed Bockman agreed. Along with Rodney Brooks, Bockman is helping spearhead the restoration efforts of the project.

“The goal is to continue the great tradition of golf here,” he said.

The project, which is estimated to cost between $100,000 to $150,000, will include a putting green, hitting stations, driving range area with netting, the ability to working on chipping and the short-game and a turfed green. The facility will also include a storage building, benches and place to display memorabilia and artifacts from the former club.

“When they were building the high school,” Bockman said, “the boosters were able to get the school board to keep this great area available. As far as we know this facility will be unique to Peters Township and while its being built by the high school for the high school, it will be for the entire community.”

Just like the high school track, outdoor basketball courts and tennis courts, Peters Township residents will be able to use the facility, Kuhn said.

“It’s a boon for the community,” he added.

Another by-product is the facility will be incorporated into the school’s physical education curriculum.

“For PE classes to come and learn golf is fantastic,” said Kuhn.

The facility is expected to be completed by the fall, but donations are required to complete the project.

For more information on the project, email Ed Bockman at opusxx@gmail.com.