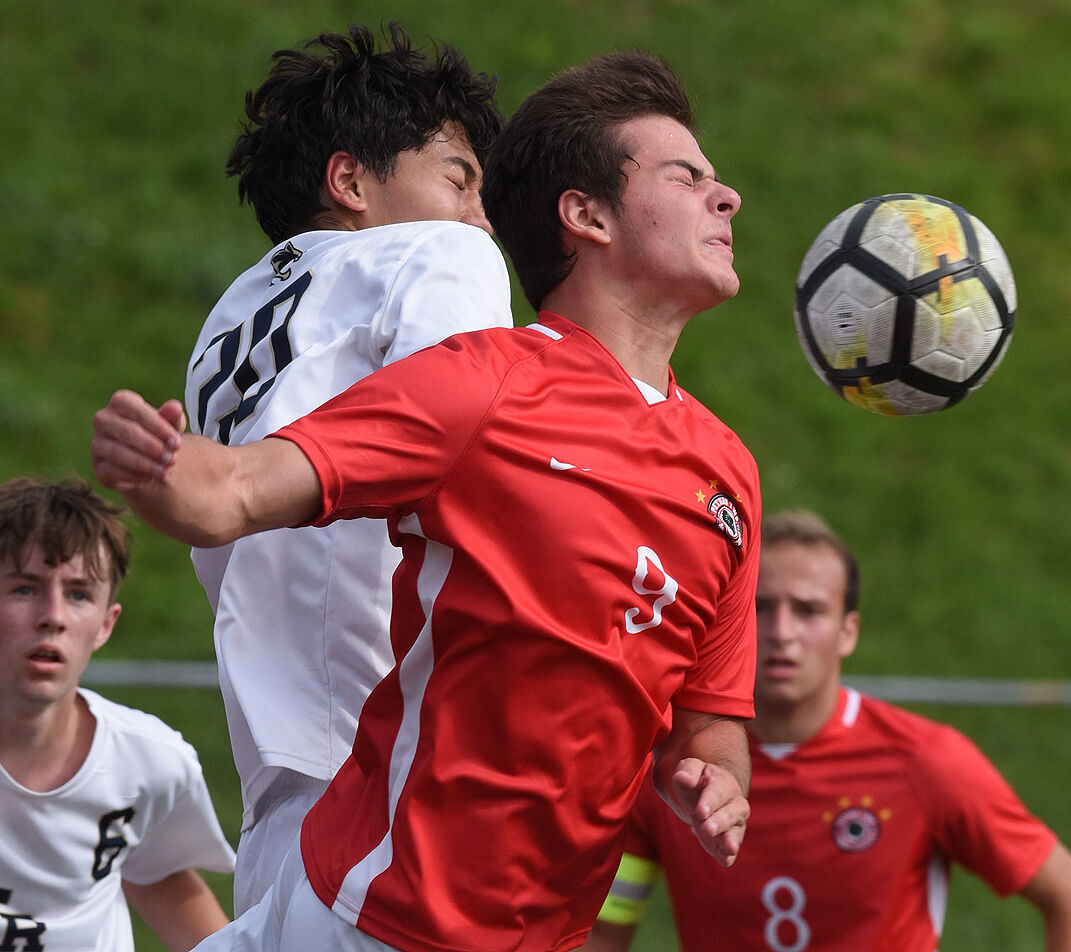 Nick Magee (9) heads the ball away from a Franklin Regional defender during the Indians’ 3-1 victory over the Panthers. 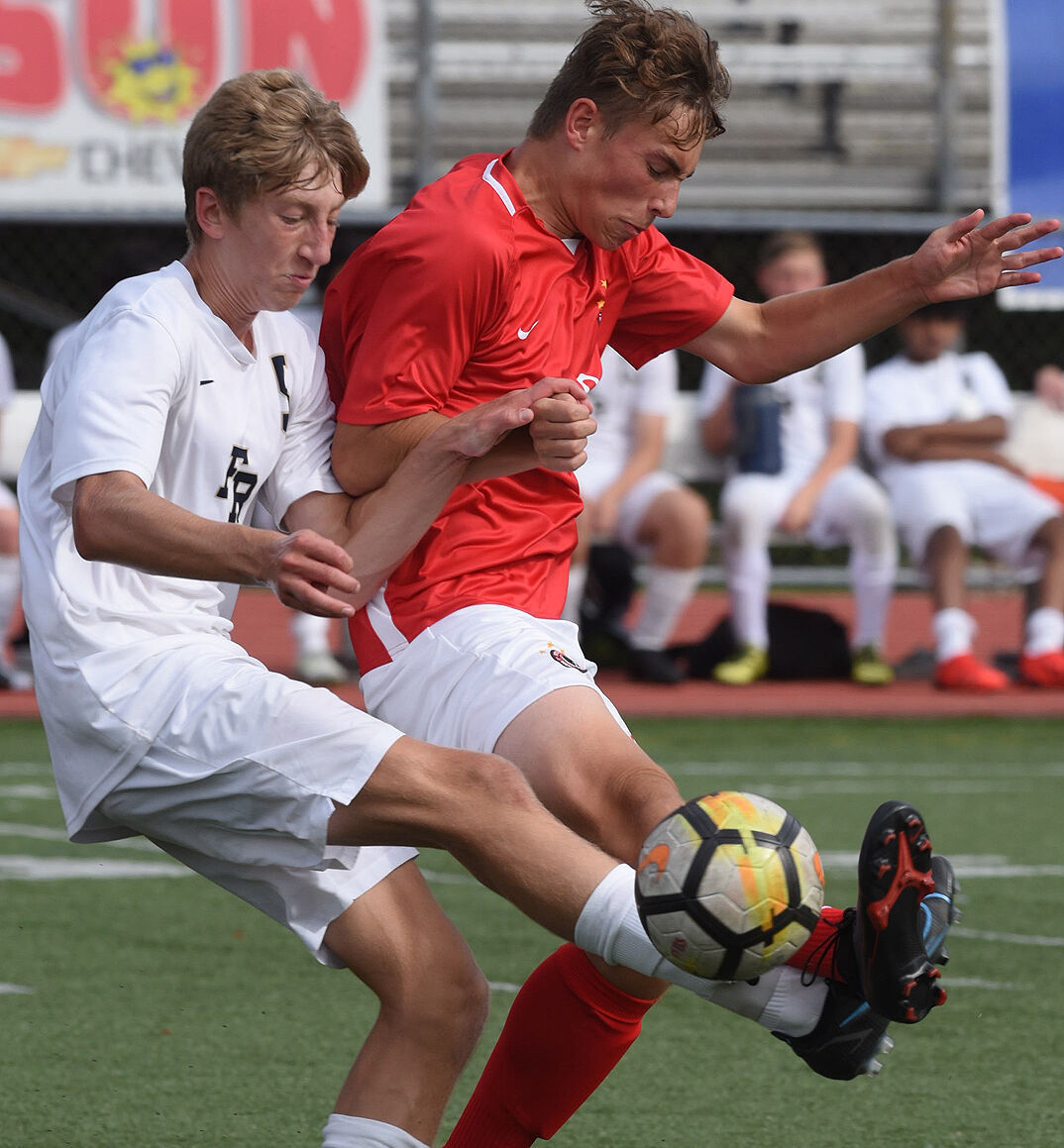 Connor Hoye of Peters Township goes toe to toe with a Franklin Regional midfielder during a non-section clash. The Indians defeated the Panthers, 3-1. 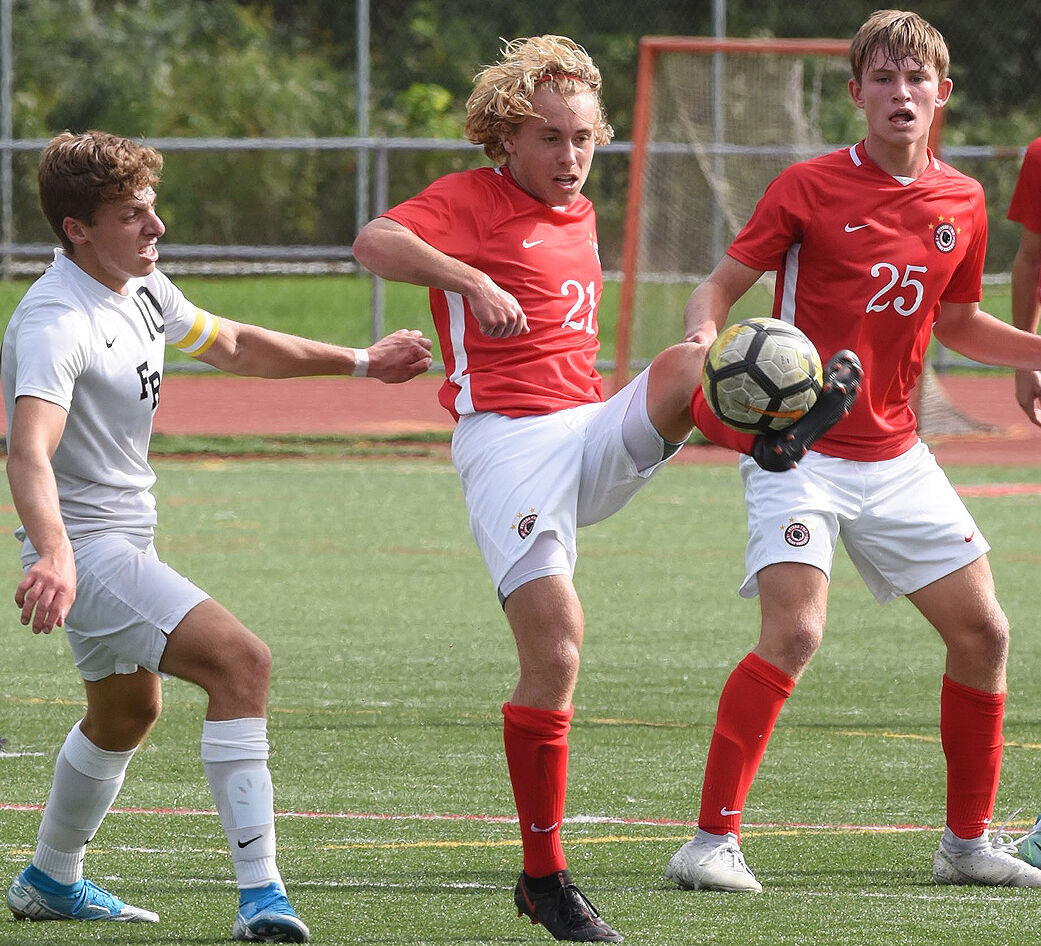 Austin Marmol (21) controls the ball while his teammate Mason Lewis (25) looks on against Franklin Regional. 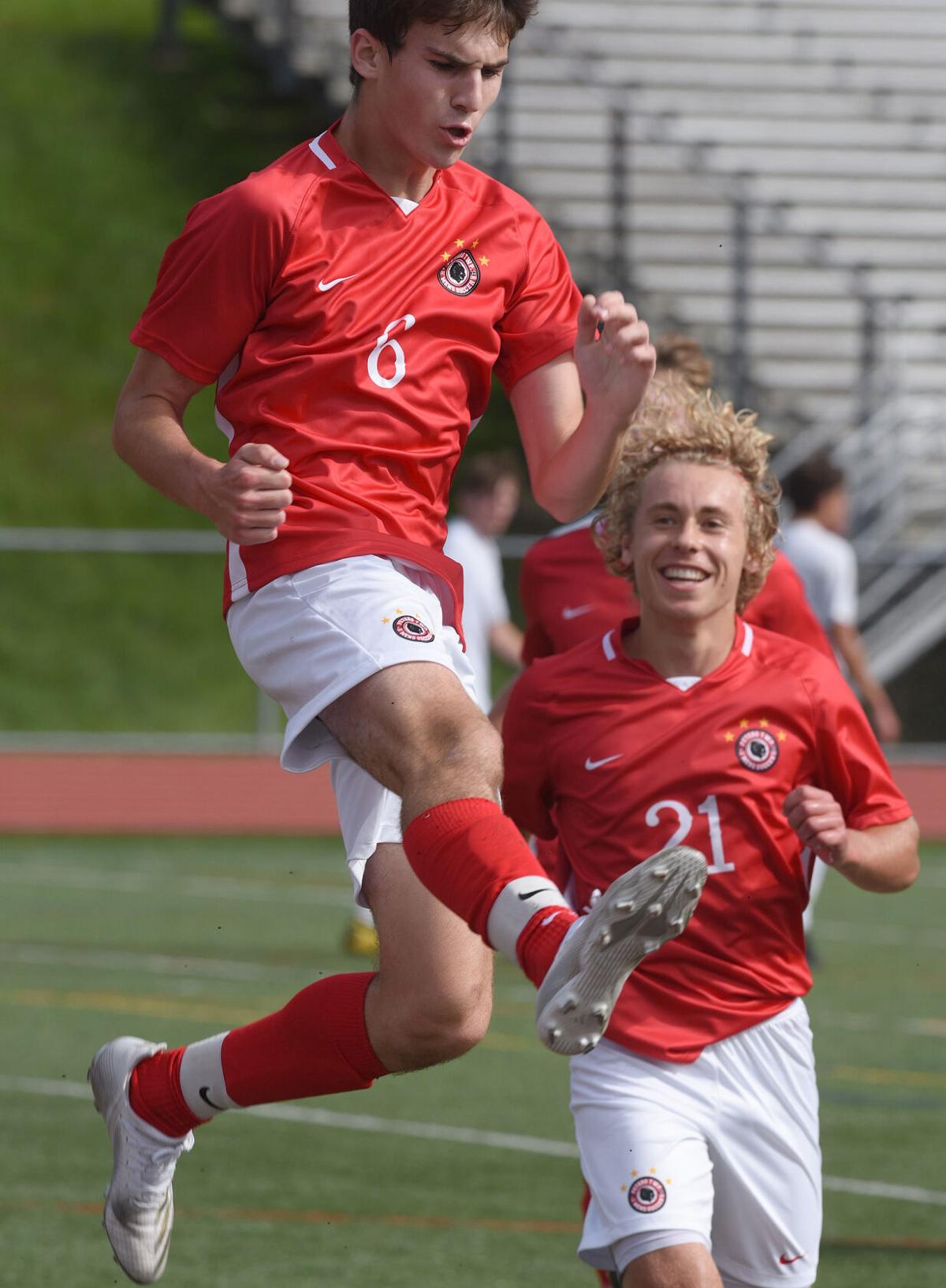 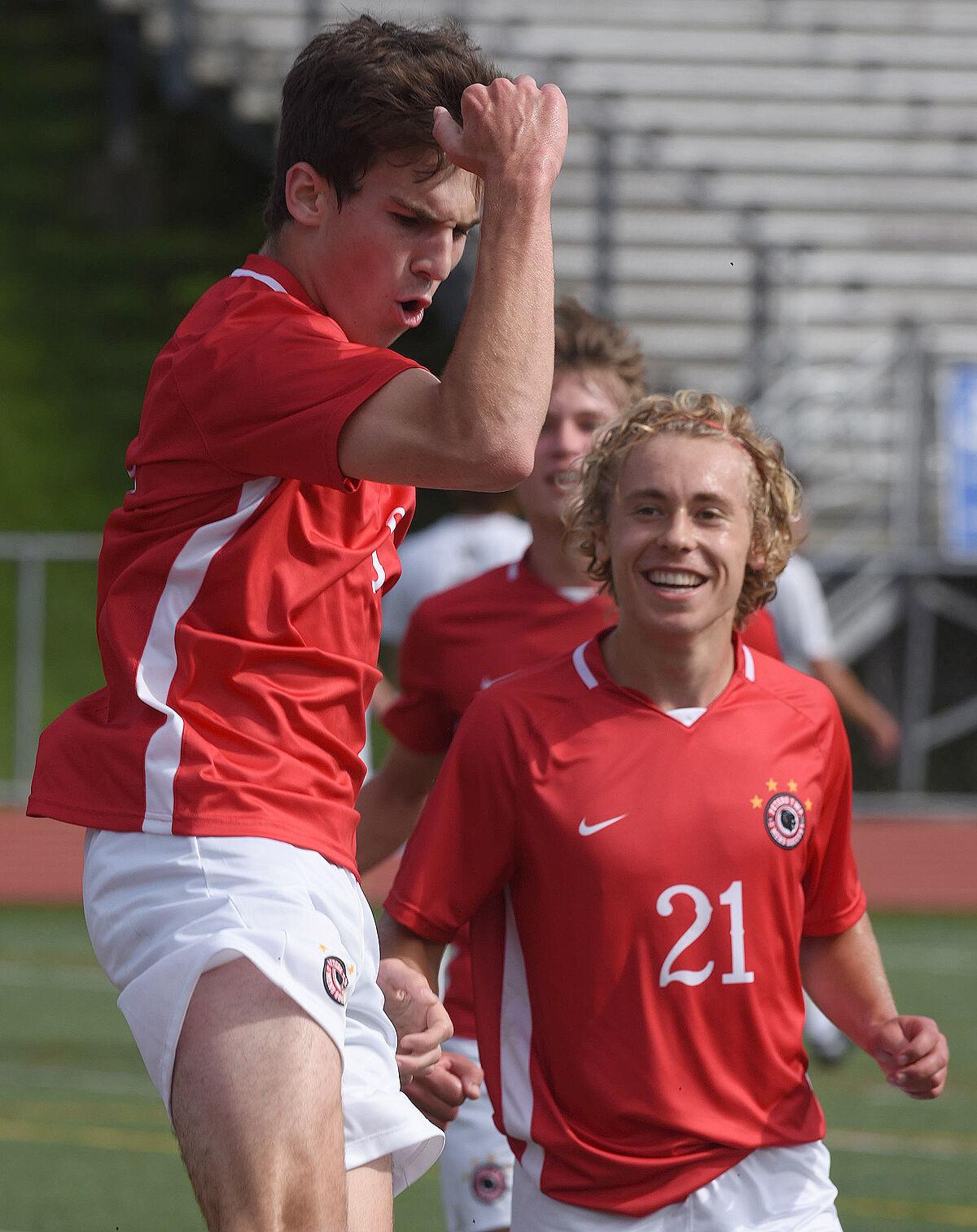 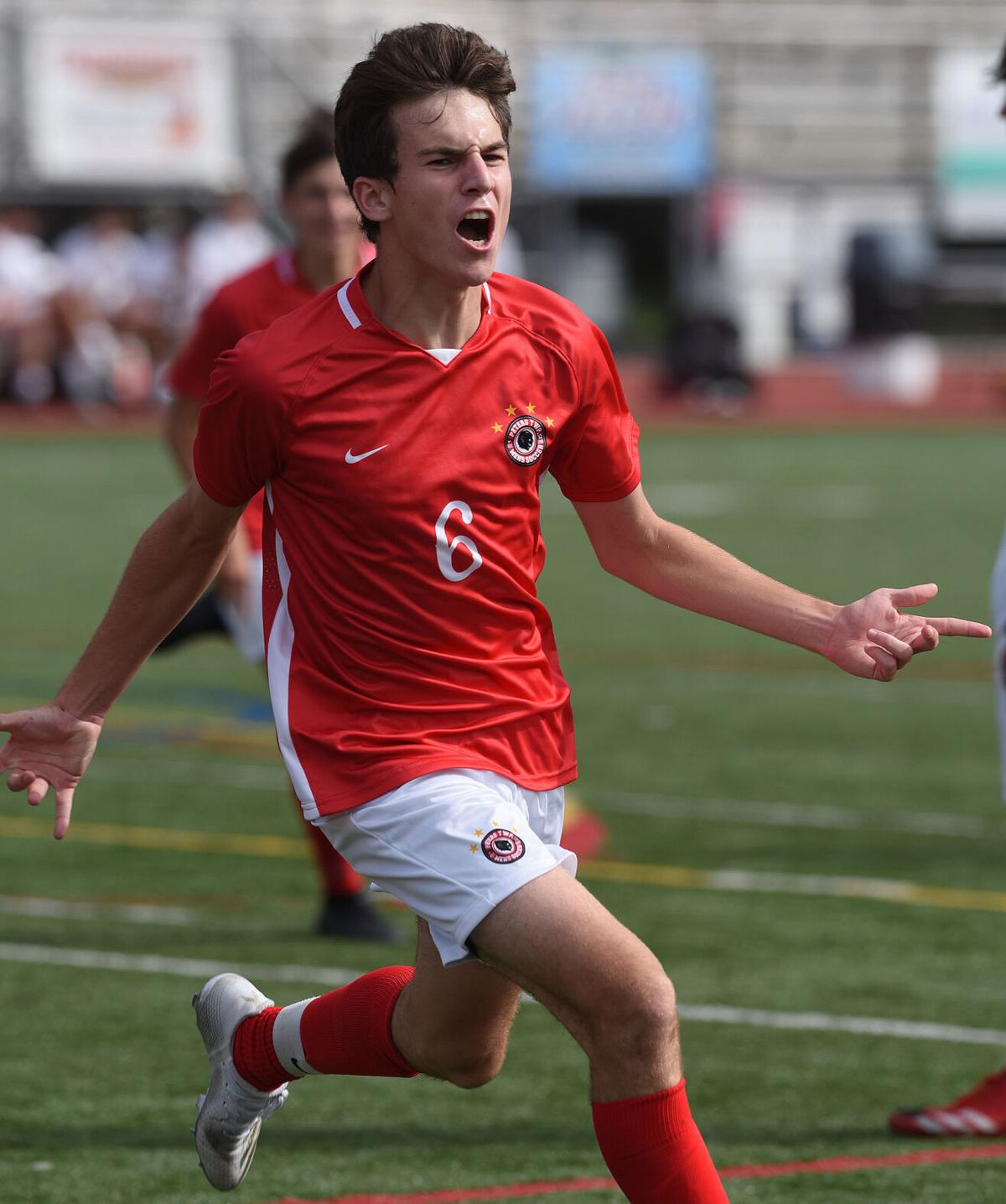 Nick Magee (9) heads the ball away from a Franklin Regional defender during the Indians’ 3-1 victory over the Panthers.

Connor Hoye of Peters Township goes toe to toe with a Franklin Regional midfielder during a non-section clash. The Indians defeated the Panthers, 3-1.

Austin Marmol (21) controls the ball while his teammate Mason Lewis (25) looks on against Franklin Regional.

The Peters Township boys soccer team is reaching for the stars this season.

With a wealth of experience and depth, the Indians anticipate challenging for their 10th WPIAL title and competing in the state final this November for the seventh time.

“This team hopes to make it’s mark in this program’s history, which is a pretty high bar,” said PT head coach Bobby Dyer. “Either by adding to our nine WPIAL championships or putting a star on our uniform, which indicates state championships.”

In 2014, the Indians won a WPIAL title and brought home PIAA gold for the fourth time in school history.

With a 29-player roster that includes seven returning full-time starters, the Indians are primed to improve upon last year’s 13-2-1 mark, which included a section title, and avenge their overtime loss in the WPIAL Class 4A final.

After posting back-to-back exhibition wins against Central Catholic and Franklin Regional, the Indians opened Section 2 action with a 6-1 victory at Baldwin.

Goalkeeper Nico Melograne excelled in recording a 3-0 victory against the Vikings. Melograne was backed by the defensive efforts of Joe Tornari, Dylan Shaw, Cole Woodward and Roman Milani.

Alex Grim and Anthony Schullek had two-goal performances against the Vikings and Panthers, respectively. Each has three goals after the first two contests. Alex Fielding, Mason Lewis and Andrew Massucci were credited with assists.

Against the Highlanders, Massucci racked up two goals and an assist. Blake Gabelhart, Grim, Steven Suchko and Tornari supplied the other scores. Nick Magee and Joe Heuler were credited with assists.

Dyer said his expectations of Massucci this fall are simple.

“We hope that Andrew, like this team, can improve upon last season,” he said.

“We return numerous players that started games and contributed for us last season and while it’s always a difficult thing to fill vacancies, we expect these senior to lead this program back to the WPIAL championship game,” Dyer said. “We are as deep as we have ever been and we think that will be our strength this year.”

Dyer expects all his varsity players to contribute.

“Our depth and experience should be our strength,” said Dyer. “We hope to improve on our finishing and team defense.”

Dyer knows the task won’t be simple. Even emerging out of section play to compete in the WPIAL playoffs is a challenge against the likes of natural rivals like Upper St. Clair, Mt. Lebanon, Bethel Park and Canon-McMillan.

“I believe,” Dyer said, “there are 10 state titles within our section. Canon-Mac and USC are always very good teams while Brashear, Lebo, Bethel and Baldwin all made big strides last year. There is no easy game in our section, especially with the quality of coaching each school processes.”