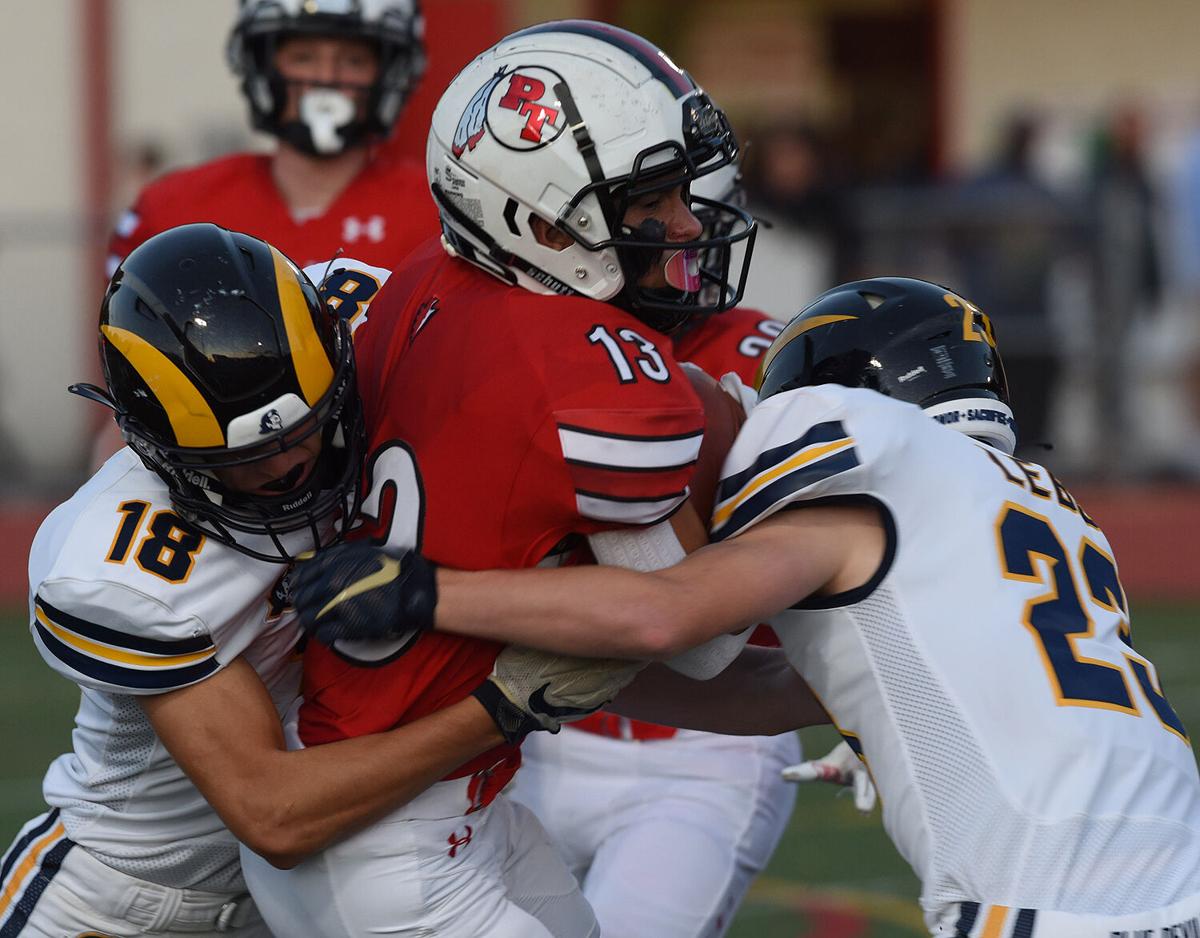 Mt. Lebanon's Michael Gevaudan (18) and Cole Markel (23) put the squeeze on Peters Township's Carter Shanafelt as he attempts to gain yardage during a non-conference game. 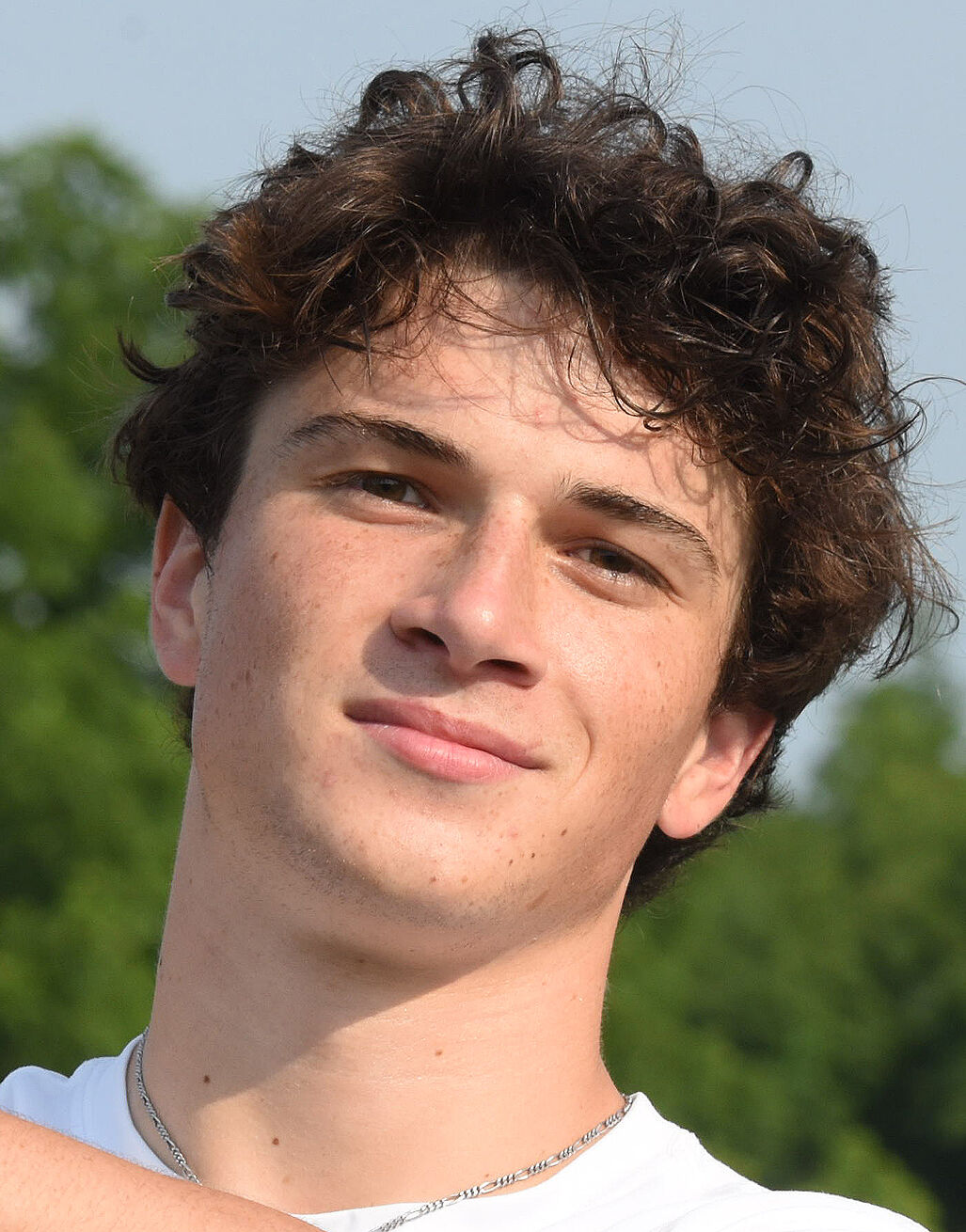 Mt. Lebanon's Michael Gevaudan (18) and Cole Markel (23) put the squeeze on Peters Township's Carter Shanafelt as he attempts to gain yardage during a non-conference game.

Peters Township head coach T.J. Plack views the Indians’ reign as three-time Allegheny Six Conference champions as both a blessing and a curse.

That sentiment has been driven home as Peters Township prepares to visit Upper St. Clair at 7 p.m. Oct. 1.

“For either team, it’s motivation,” Plack said. “Either they use it to knock us off or we fight to keep our title. For us, it has helped us in the past.”

The Indians ran the table in claiming undefeated conference crowns in 2019 and 2020. They also finished as WPIAL runners-up those two seasons and compiled a 37-10 record over the past four years.

Peters Township enters the game with an impressive 28-14 victory at Penn-Trafford under its belt. The Warriors eliminated the Indians from the playoffs last season.

“Peters Township has been the team to beat for the last few years in our conference,” said USC head coach Mike Junko. “Their coaches have done an outstanding job of creating a winning culture and preparing their players to play on Friday nights.”

Plack has equal respect for the Panthers.

“USC vs. PT is always a good contest in any sport and we have had some great, competitive games,” Plack said. “They have good players and they have played us tough for four years. So I expect nothing less than that this game.”

While the schools have a rivalry that spans all sports, and while the conference opener adds a little spice to the schedule, USC and PT look at the battle as a new beginning.

“Conference play gives our team a chance to start with a clean slate and refocus our efforts as a program,” said Junko. “Our conference looks to be the most competitive top to bottom in 5A again this year so it should make for another excellent challenge for our football team.”

Plack said when his players look across the field from their sideline they will have all the motivation they need.

“We are excited for the first conference game and we treat it like another week but considering the opponent there might be a little extra in everybody’s step,” Plack said. “It’s still a game on the schedule and while they all matter we want to be 1-0. At the end of the day we are not conference champions unless we win this game.”

Peters Township senior quarterback Sam Miller ranks among the leaders in the WPIAL with 474 yards and five scores. He passed for 162 yards and three touchdowns against Penn-Trafford.

Carter Shanafelt caught touchdown passes of four and 41 yards for the Indians in that game, while Jacob Macosco added a 34-yard touchdown reception.

“Sam Miller is an excellent quarterback,” Junko said of the Columbia University baseball recruit. “He would have been a three-year starter in most programs. He has made the most of his opportunity and has kept their offense operating at a high level despite some losses to graduation.”

USC has gotten the most out of Aiden Besselman and Mateo Cepullio during a 2-2 start.

In a 35-14 loss to defending WPIAL and state champion Pine-Richland, Besselman had five receptions for 87 yards and a four-yard touchdown from Brady Erdos, who completed 10 passes for 121 yards. Besselman also had four tackles, including three for a loss.

Cepullio does it all for the Panthers. He ranks as a top receiver, defensive back and return specialist for USC.

“Aidan continues to make plays on the offensive side of the ball for us,” Junko said. “Mateo has been solid in coverage all year and made a number of great plays on defense.”

For the Indians, Andrew Massucci continues to be productive while also leading the soccer team to an undefeated record. He kicked a 34-yard field goal.

Rich Woods rushed for a 43-yard score to nail the victory down against Penn-Trafford.

In addition, USC must contend with Nico Pate and Luke Petrarca on a PT defense that has allowed 21 points in its three victories.

“Defensively they continue to play a very disciplined system as a unit,” Junko said. “They have a number of DI guys on defense that have a knack of getting to the football.

“So we have to limit turnovers. In our early season losses, that has been our Achilles heel. The team that takes care of the football will have a decided advantage on Friday night.”

“It’s such a puzzle every week,” he said, “but I’m looking forward to putting all these pieces together.”