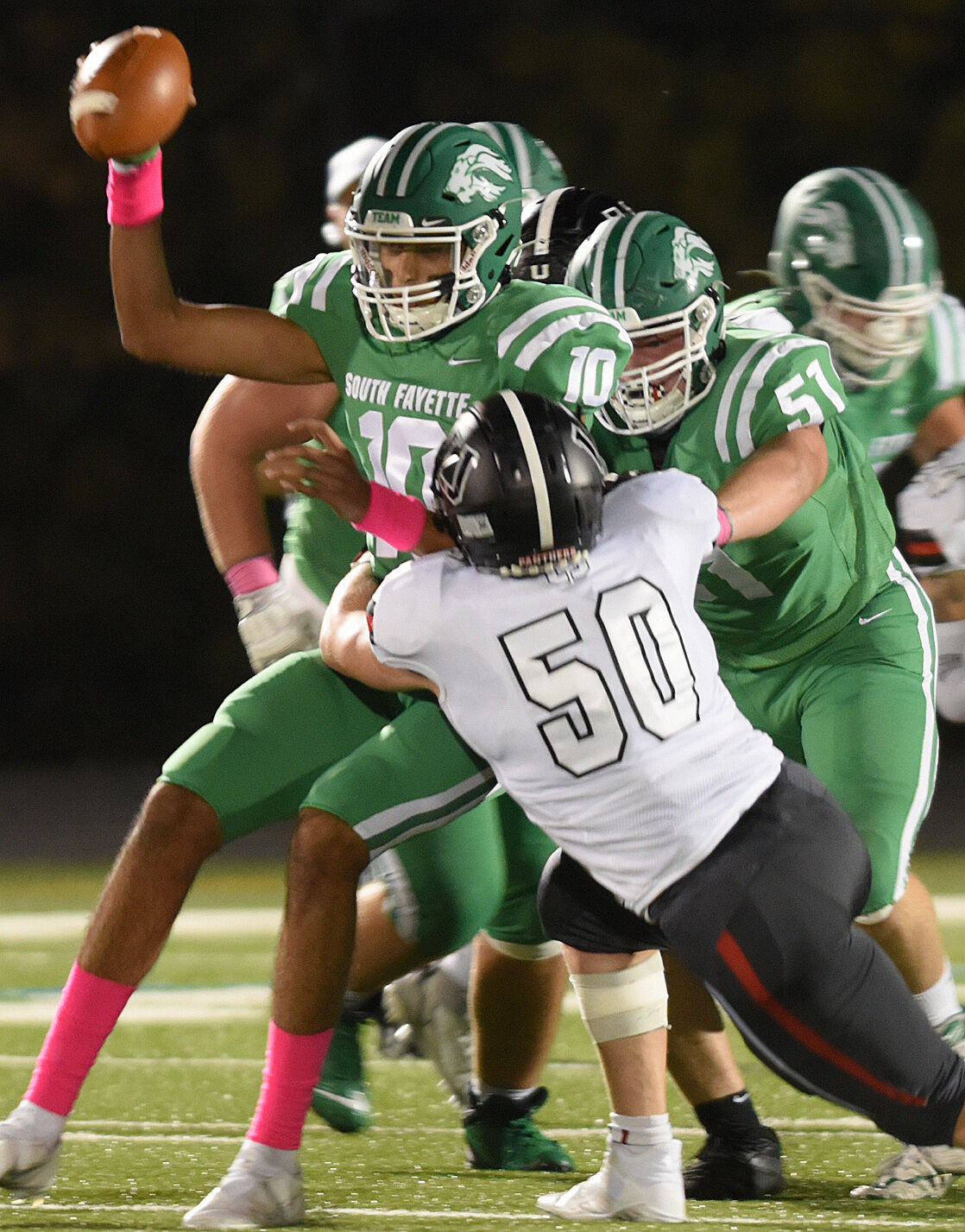 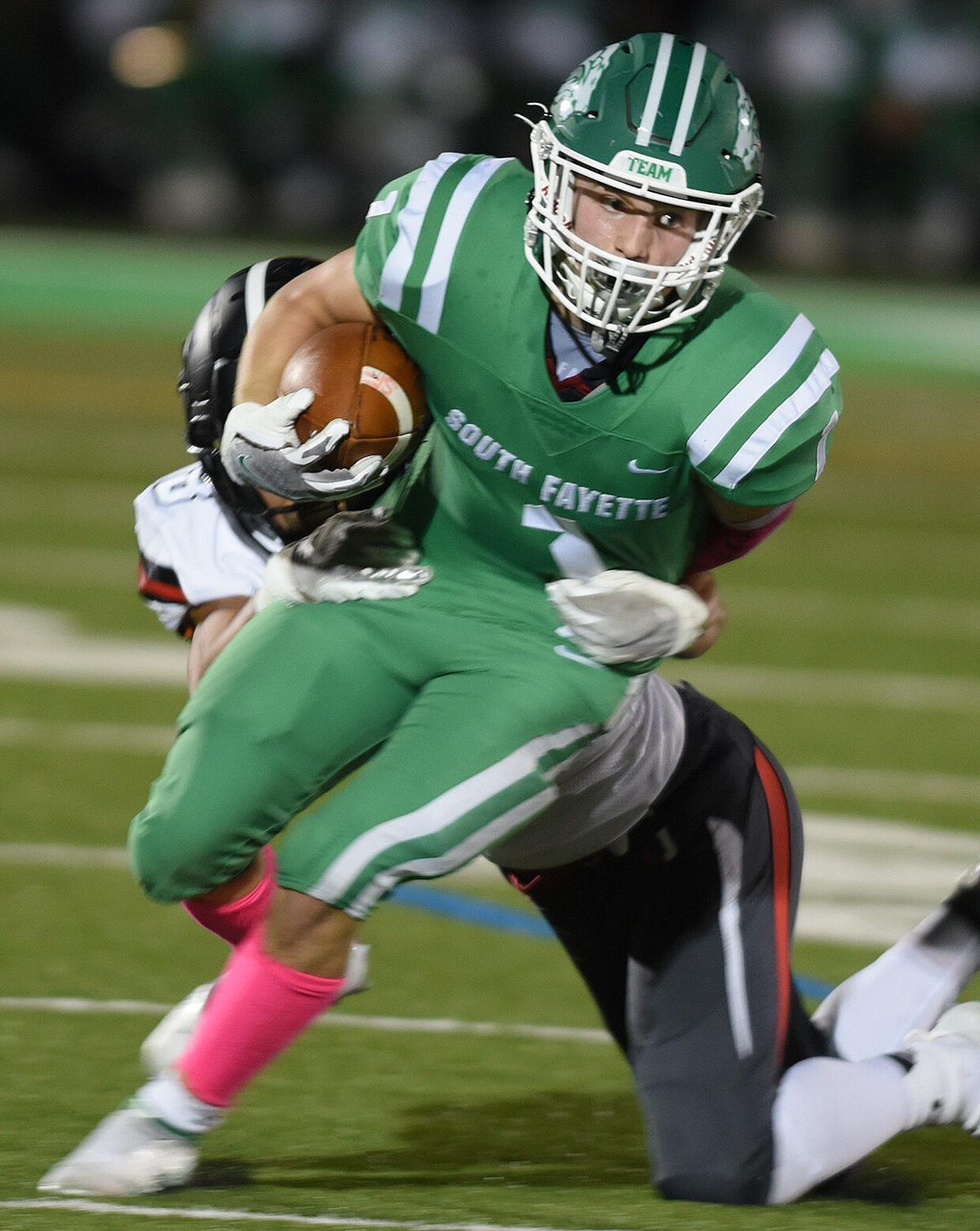 South Fayette’s Charley Rossi (1) ranks among the top receivers in the WPIAL. 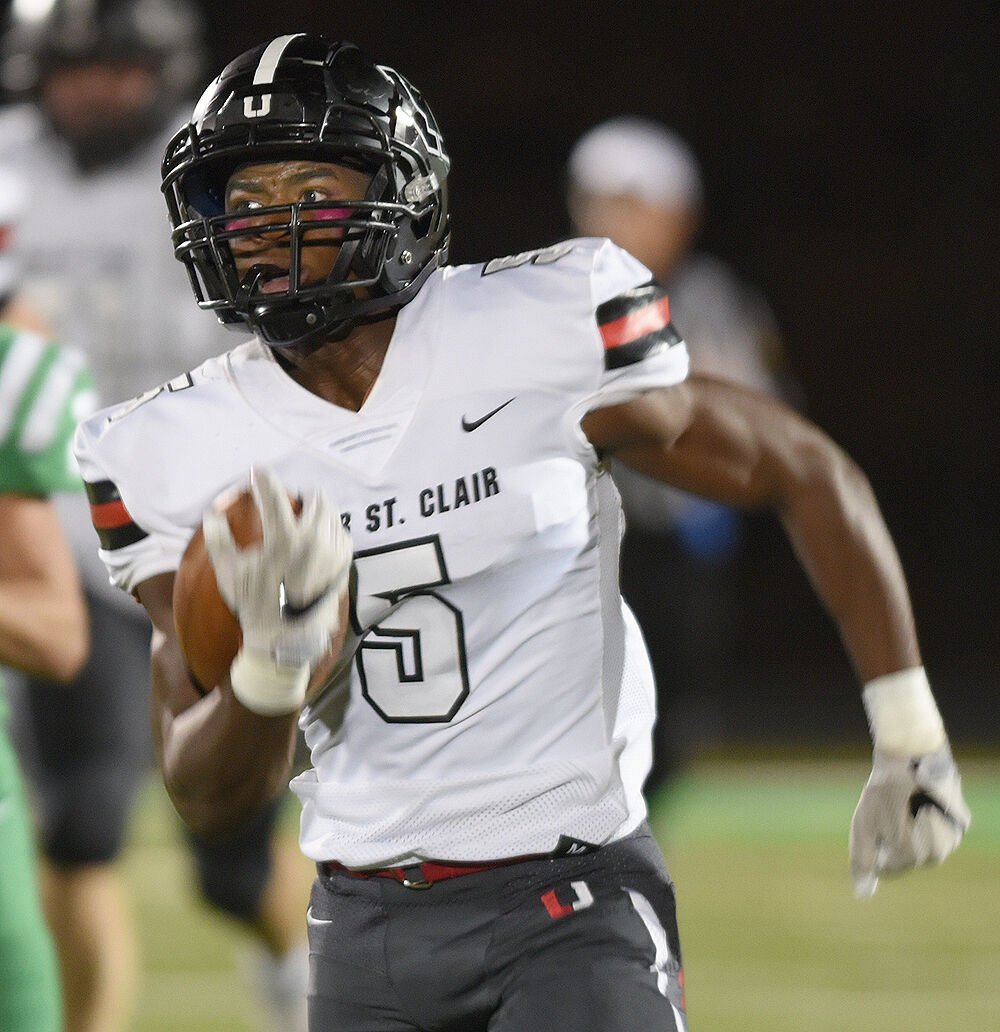 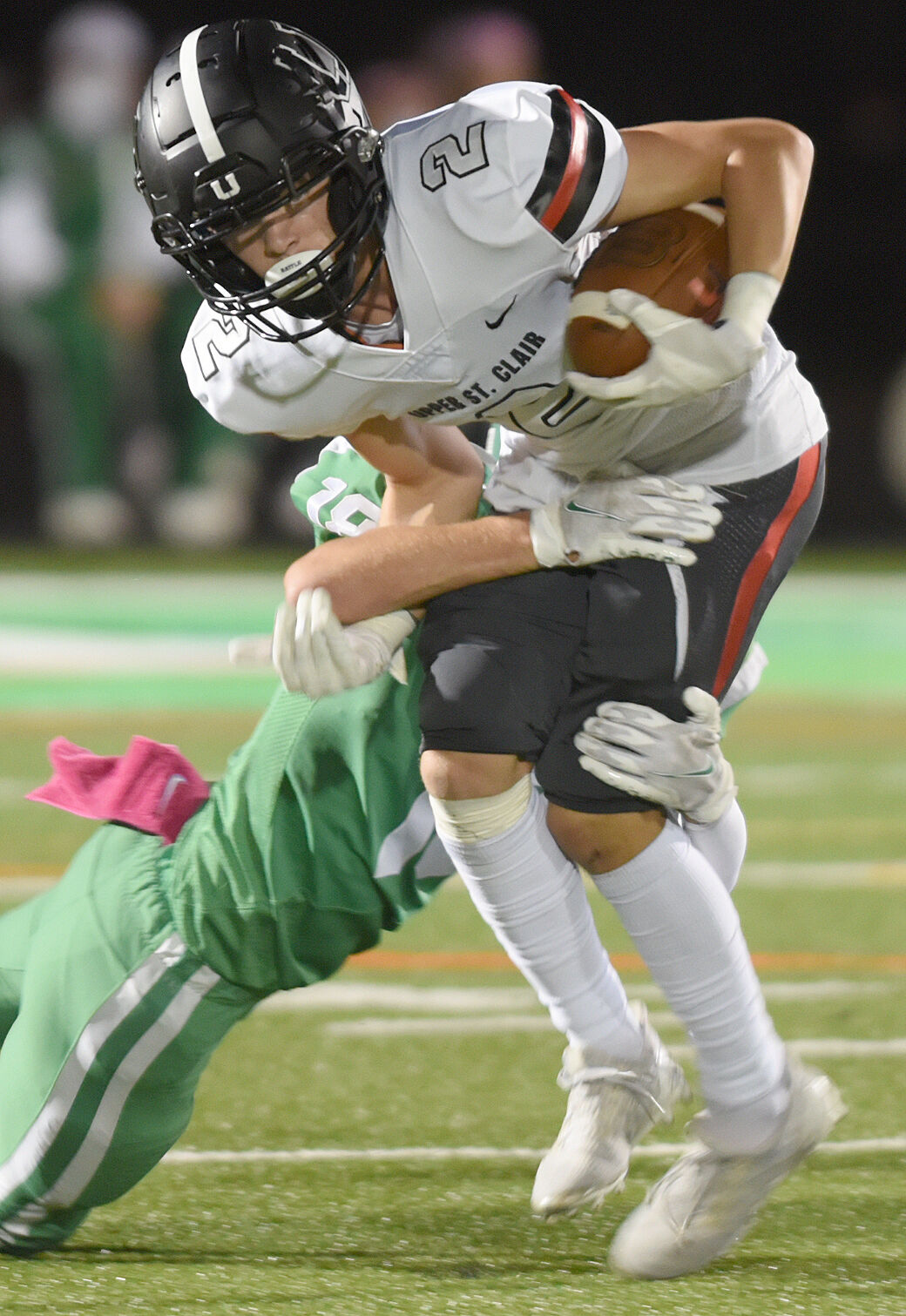 South Fayette’s Charley Rossi (1) ranks among the top receivers in the WPIAL.

Editor’s note: Oct. 30’s WPIAL playoff games did not end in time to be included in this edition.

If defense wins championships, then Peters Township (6-0) and Upper St. Clair (5-2) ended the regular season on a positive note before the Indians hosted Woodland Hills (5-2) while the Panthers visited Penn-Trafford (5-1) in the first round of the Class 5A tournament.

While the Indians dispatched West Allegheny 23-7 to preserve its first undefeated regular season since 1975, the Panthers recorded 10 sacks as they outlasted South Fayette 36-32 in their Allegheny Six Conference finale.

Upper St. Clair’s Brandon Coe led the way with 4.5 tackles for loss, while Luke Banbury followed with three, including two sacks in the finals 62 seconds to hold off the Lions. Jalen Mortimer, Jamaal Brown and Hunter Schroeck also register sacks for the Panthers.

Upper St. Clair’s Brady Bartusiak, David Pantelis, Ethan Hiester, Jaden Keating, Will Engel, Mark Banbury, Aidan Bessleman, Matt Haversack, Ethan Dahlem and Tim Pollock also were instrumental on the defensive side of the ball against the Lions, who were held to 64 yards rushing.

“So much credit goes to our defense. No doubt,” said USC coach Mike Junko. “South Fayette has such a high-powered offense. So you are always on the end of your seat not knowing if they are going to get a big play.”

Dahlem made the plays on offense. He scrambled to complete a 35-yard pass to Mateo Cepullio for a fourth-down conversion that set up the game-winning score. Dahlem connected with Banbury for the decisive nine-yard strike with 4:13 to play.

“Just when you think Ethan will never do anything to top that, he does,” Junko said.

Dahlem completed 13 of 21 passes for 199 yards and two other scores. His 21-yard strike to David Pantelis helped stop a 16-point Lions’ rally. South Fayette outscored the Panthers 25-13 in the second half.

Dahlem earlier hooked up with Cepullio for a 49-yard scoring strike. Cepullio had five catches for 108 yards in the game.

Dahlem also scampered into the end zone from 3 yards out to vault USC to a 23-7 halftime advantage. He completed 102 of 162 attempts for 1,472 yards and 14 touchdowns in the regular season.

Pantelis finished the regular season with 448 yards on 30 catches and has been Dahlem’s top target. Cepullio, who had 397 yards on 26 receptions, and Besselman, who finished with 270 yards on 13 grabs, were also big targets in the Panthers’ passing attack.

Keating ranked second with 312 rushing yards. He rambled 76 yards for a touchdown against South Fayette. He ran for 160 yards rushing on 15 carries in the Panthers’ regular season finale.

Abelardo Sobarzo and Matt Russell handled the placekicking duties for USC. While Russell converted the extra points, Sobarzo kicked the field goals. He connected on a 31-yarder against the Lions.

During the regular season, Peters Township ranked second behind Pine-Richland (6-0) in defense. The Indians surrendered 62 points for a 10.3 average while the Rams allowed 61 points for a 10.2 average per game.

In PT’s win against West Allegheny, Nico Pate rambled for 214 yards and a touchdown. Vinny Sirianni also rushed for a score.

Logan Pfeuffer and Bryelen Carrtington hooked up for an 18-yard touchdown pass and Andrew Massucci converted a 24-yard field goal to account for the rest of the scoring.

Despite the loss to USC, the Lions earned one of two wildcard playoff spots in Class 5A. South Fayette (4-3) visited top-seeded Pine-Richland (6-0) in its opener.

During the regular season, Naman Alemada ranked among the top passers in the WPIAL.

Alemada completed 23 of 37 passes for 371 yards and three scores against USC and finished the regular season with 1,651 yards and 15 touchdowns.

SF wide receiver Charley Rossi had 11 catches for 173 yards against the Panthers. He had 708 receiving yards to place himself among the WPIAL’s top receivers in the regular season.

Ryan McGuire finished with five catches for 110 yards against USC and Joey Audia had six receptions for 86.

A blocked extra point by Joey Peters propelled Mt. Lebanon (4-2) to a 28-27 victory at Seneca Valley.

The Blue Devils hosted Central Catholic (4-2) in a WPIAL Class 6A playoff game with the winner advancing to the WPIAL championship game set for 7 p.m. Nov. 6 at Martorell Stadium in the North Hills.

Alex Tecza rushed for 172 yards and two touchdowns against Seneca Valley and Eli Heidenreich had four receptions for 41 yards and a 10-yard touchdown catch from Joey Daniels.

The Colts entered the Class AAAA playoffs with a 6-1 record. CV clinched its second-place finish in the Parkway Conference with a 46-20 victory over New Castle.

A WPIAL passing leading with nearly 1,000 yards, Colts quarterback Anthony Mackey completed 13 of 14 passes for 185 yards and three touchdowns against the Hurricanes.

Jordan Demus dominated the ground attack. He rolled up 193 yards and four scores against New Castle. He entered the playoffs with 533 rushing yards.

The Colts traveled to Belle Vernon (5-1) for their first-round playoff game.

The Black Hawks (0-7) wrapped up a winless 2020 campaign with a 30-7 loss to Moon. Troy Volpatti rushed for a 63-yard touchdown touchdown against the Tigers.

After more than 40 years of coaching high school football, Mike Zmijanac has retired. He had served the past two seasons as Seton LaSalle skipper, compiling a 3-13 record.

The school announced Zmijanac’s departure moments after the Rebels lost their season finale to South Side Beaver, 28-21. SLS finished the 2020 campaign with a 1-6 overall record and 1-4 mark in the Three Rivers Conference.

“This was an unusual football season in many respects, given the complications of the coronavirus pandemic, and we appreciate Coach Z’s efforts to navigate these challenges,” said SLS Principal Lauren Martin.

“We would like to thank Coach Z and his staff for their commitment to our program and to our student-athletes over the past two seasons. We wish him all the best in his future endeavors beyond coaching.”

Martin noted that Seton LaSalle’s commitment is to consistently develop the potential of all of its student-athletes.

“This is the perfect time for a change in the leadership of our football program,” she added. “We will immediately begin the search for the next head coach.”

Administration intends to hire a new coach this fall to ensure all parties involved in the program have plenty of time to get to know the each other and prepare for an engaging off-season.

Zmijanac coached at Ringgold for one season, compiling an 0-10 record in 2018.

Prior to that, Zmijanac guided Aliquippa to six WPIAL titles and one PIAA championship. In 21 seasons, he went 237-36.

Zmijanac is a 1960 Aliquippa graduate and a Mt. Lebanon resident.