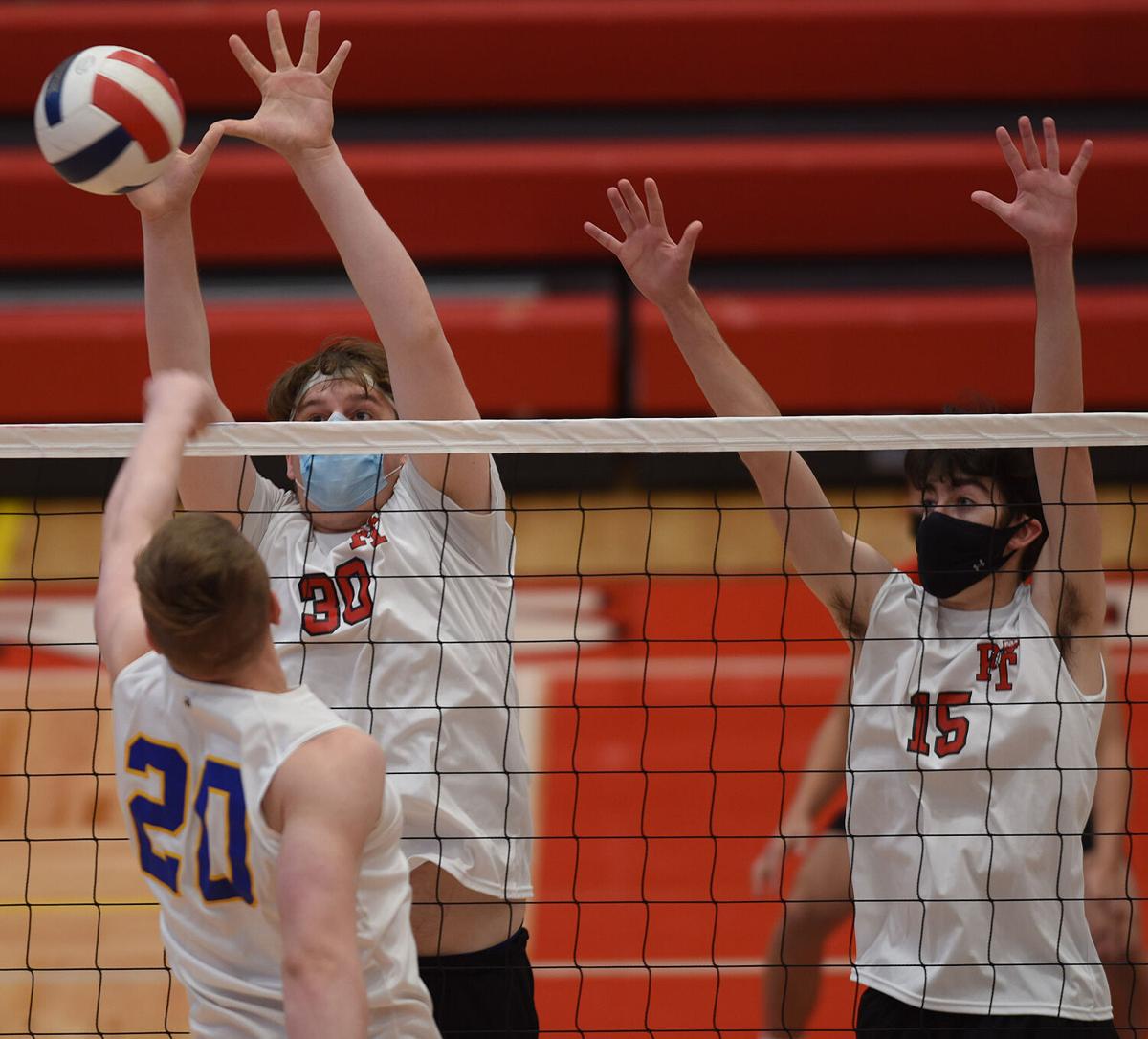 Peters Township's Declan McMahon (30) and Ryan Deegan (15) combine for a block during a match against Canon_McMillan. The Indians swept the Big Macs, 2-0, to complete an undefeated section season. 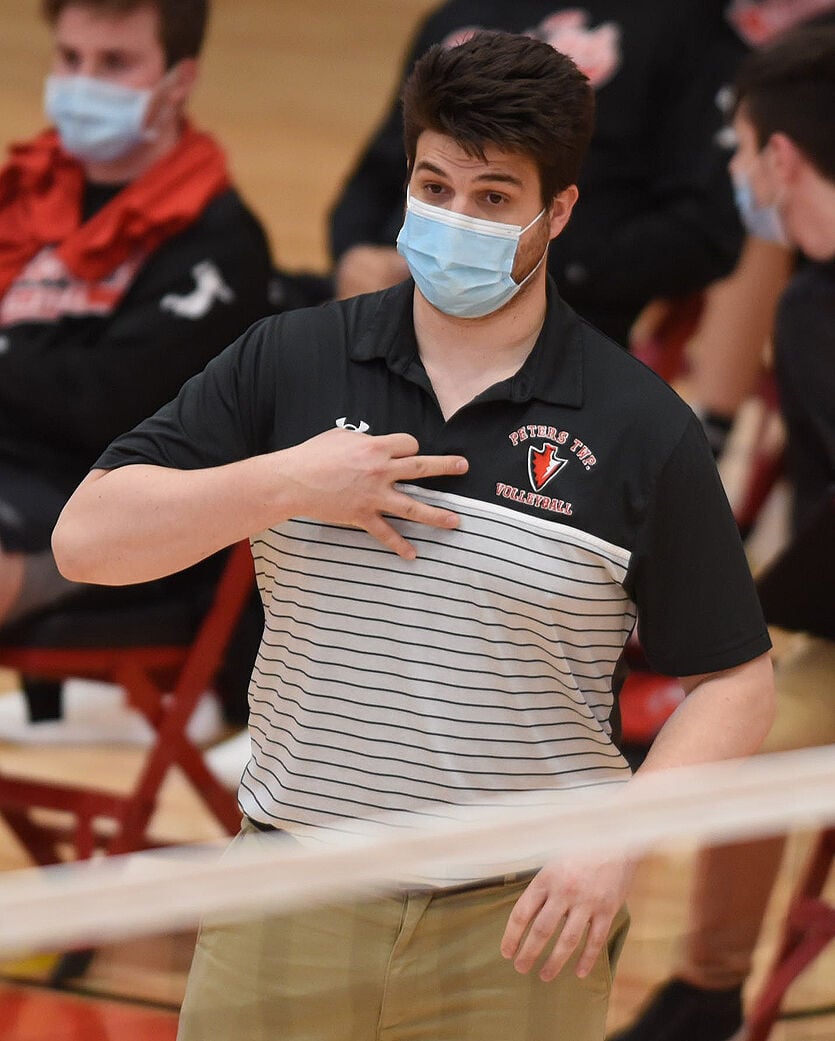 Peters Township coach Tyler Fiely signals to his players during a volleyball match against Canon-McMillan. In his first season at the helm, Fiely guided the Indians to an undefeated section title with a 12-0 record. The banner was the first in program history. 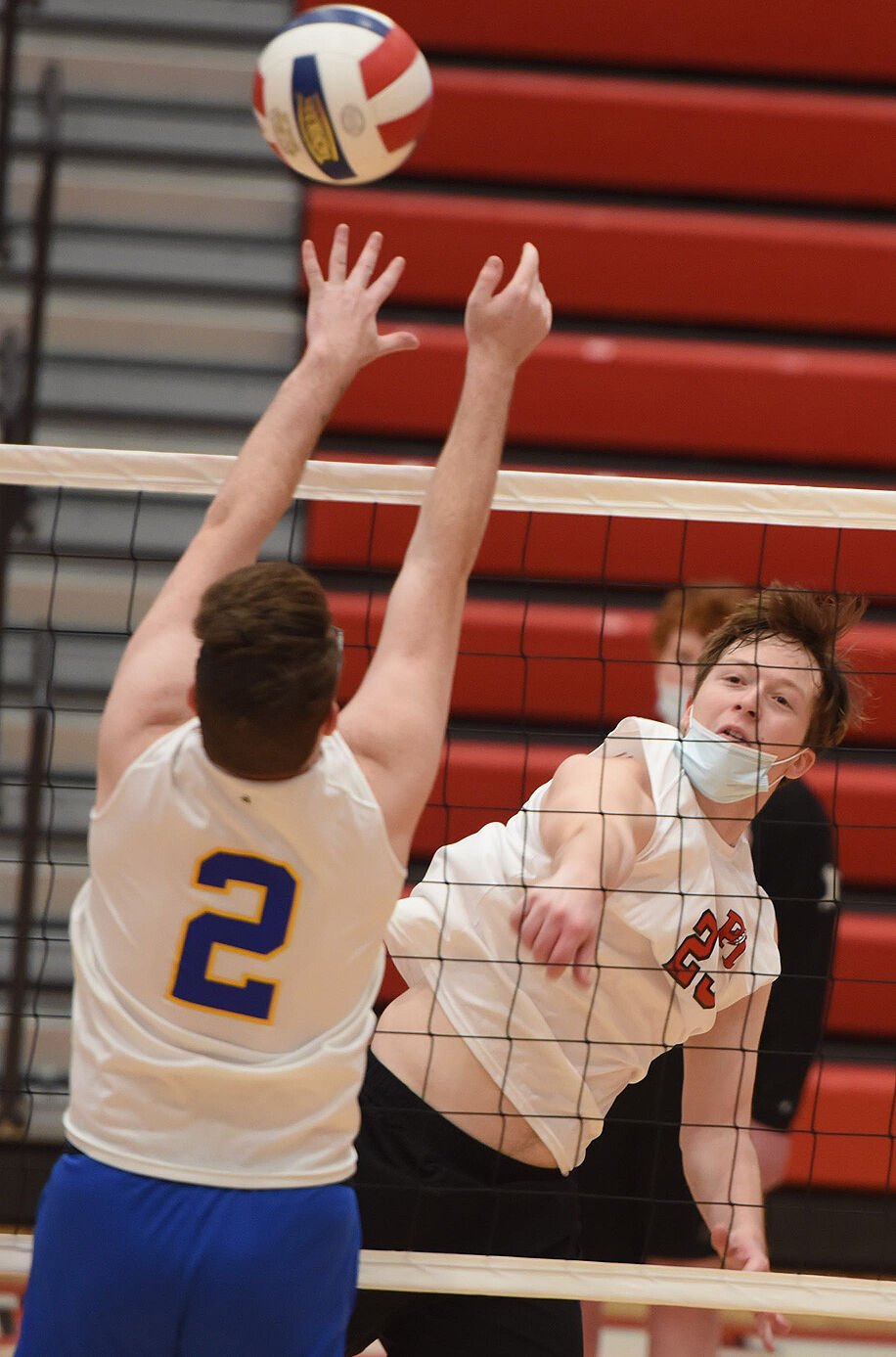 Brian Sullivan helped Peters Township to victory against Canon-McMillan, 3-0, with a team-high 12 kills. 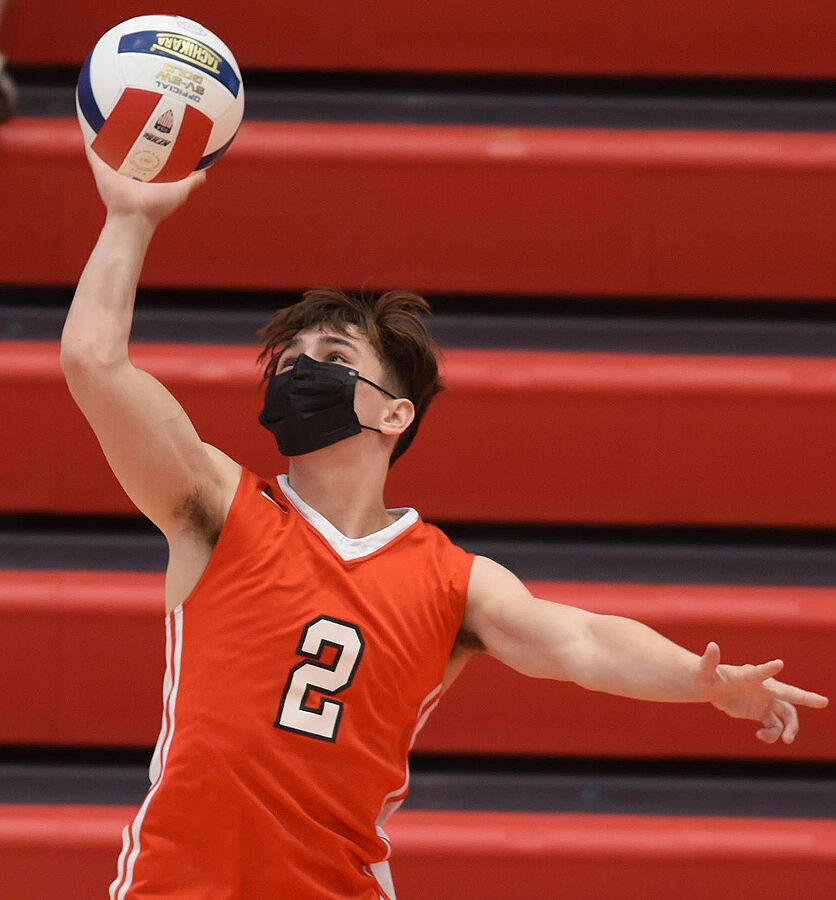 Caleb Eynon serves up an ace for Peters Township during a 3-0 victory against Canon-McMillan. The Libero led the Indians with 16 digs.

Peters Township's Declan McMahon (30) and Ryan Deegan (15) combine for a block during a match against Canon_McMillan. The Indians swept the Big Macs, 2-0, to complete an undefeated section season.

Peters Township coach Tyler Fiely signals to his players during a volleyball match against Canon-McMillan. In his first season at the helm, Fiely guided the Indians to an undefeated section title with a 12-0 record. The banner was the first in program history.

Brian Sullivan helped Peters Township to victory against Canon-McMillan, 3-0, with a team-high 12 kills.

Caleb Eynon serves up an ace for Peters Township during a 3-0 victory against Canon-McMillan. The Libero led the Indians with 16 digs.

The Peters Township boys volleyball team made history this spring when it captured its first ever section championship.

With the WPIAL Class AAA playoffs commencing May 18, the Indians plan to battle with perennial powers North Allegheny and Seneca Valley to add another significant achievement this season.

North Allegheny has won 14 of the past 17 WPIAL championships and 20 in total.

“NA and SV both are packing a lot of power and talented players,” said PT head coach Tyler Fiely. “Although undersized, I believe my team can pack a punch and should be able to compete with everyone. I’m very hopeful for this team as they look to cash in on their hard work through such a challenging year.”

The Indians finished 12-0 in Section 1 after sweeping Canon-McMillan, 3-0, in their regular season-finale all while contending with COVID-19 and adhering to mitigation protocols.

Serving and passing have played integral roles in PT’s accomplishments.

For starters, the Indians average three service aces per set. They have accumulated nearly 200 aces.

“We have placed a lot of focus on becoming a more aggressive serving team,” said Fiely.

“We also have some of the best control outsides in the district to go with one of the top Liberos in the state.”

Caleb Eynon is that Libero. The junior averages a 2.7 receive grade and has 245 digs.

Seniors Brian Sullivan and Ethan Cooper are the outside hitters along with junior Tommy Bametzrieder.

Sullivan leads the team in kills with 179. In a recent win against rival Upper St. Clair, he set the school record for kills in a single game with 25.

“He has been an absolute blast to watch,” Fiely said.

Cooper brings a lot of versatility to the team. At the beginning of the year, he operated in a 6-2 with Nathan Klein until the sophomore gained his bearings as a setter. Cooper has registered 37 aces.

“Ethan is one of our most efficient hitters to go along with being one of the best servers in the WPIAL,” said Fiely.

Bametzrieder had been going back and forth with Sullivan as the team’s kill leader with 121 until he suffered an injury. Fiely said he is expected to return to the line-up soon.

Klein recently garnered the Western Pennsylvania Volleyball Coaches Association’s Player of the Week honor for his 66 assists and 15 aces.

“Nathan has been a stable court general for this young team,” Fiely said. “We are excited to see what the future holds as he builds on his first varsity campaign.”

Ryan Deegan is also a sophomore with untapped potential as a middle hitter. According to Fiely, his biggest impact has been “bringing a solid block” to the front line of defense. Through 12 games, he has totaled 16.

“For a player who has never played until this year Ryan has been impressive,” Fiely said. “I expect a lot to come as this player continues to grow.”

Juniors Will Josefoski and Nathan Dummer have made their mark as hitters; Josefoski in the middle and Dummer on the right. Josefoski had 82 kills through 12 games to go along with 24 blocks. Dummer had 109 kills.

“Will has been a dynamic threat on the net that allows us to run a fast-paced offense,” Fiely said. “He’s also been giving our defense something solid to set-up around.”

Fiely said the Indians have greatly benefited from Dummer’s versatility.

“He is a consistent producer on offense and provides a solidified pin blocker against the strong outsides we have to face,” Fiely said. “He has been able to neutralize most.”

Tyler Fiely may be a new face in the Peters Township coaching line-up but the Cambridge Springs native is not new to his sport of volleyball.

After a successful scholastic career in volleyball as well as basketball at the District 10 high school, Fiely played two seasons at Penn State-Behrend. The 6-2 outside hitter amassed 130 kills.

He transferred to Penn State’s main campus his junior year to complete the curriculum required to earn his civil engineering degree. Field joined the Nittany Lions volleyball steam as a statistician and helped facilitate daily drills.

He embarked on his coaching career as a college junior. He coached a club that his former Behrend teammate started.

With the A-10 Volleyball Club, he has been coaching several players from Peters Township since they were seventh and eighth graders. They are now high school juniors and sophomores.

Those connections and his job brought Fiely to Peters Township but COVID-19 prevented him from making his coaching debut because the 2020 spring season was canceled.

“I decided I wanted to pursue my growth as a coach with the great relationships I was able to build with the families and athletes of the area,” he said.