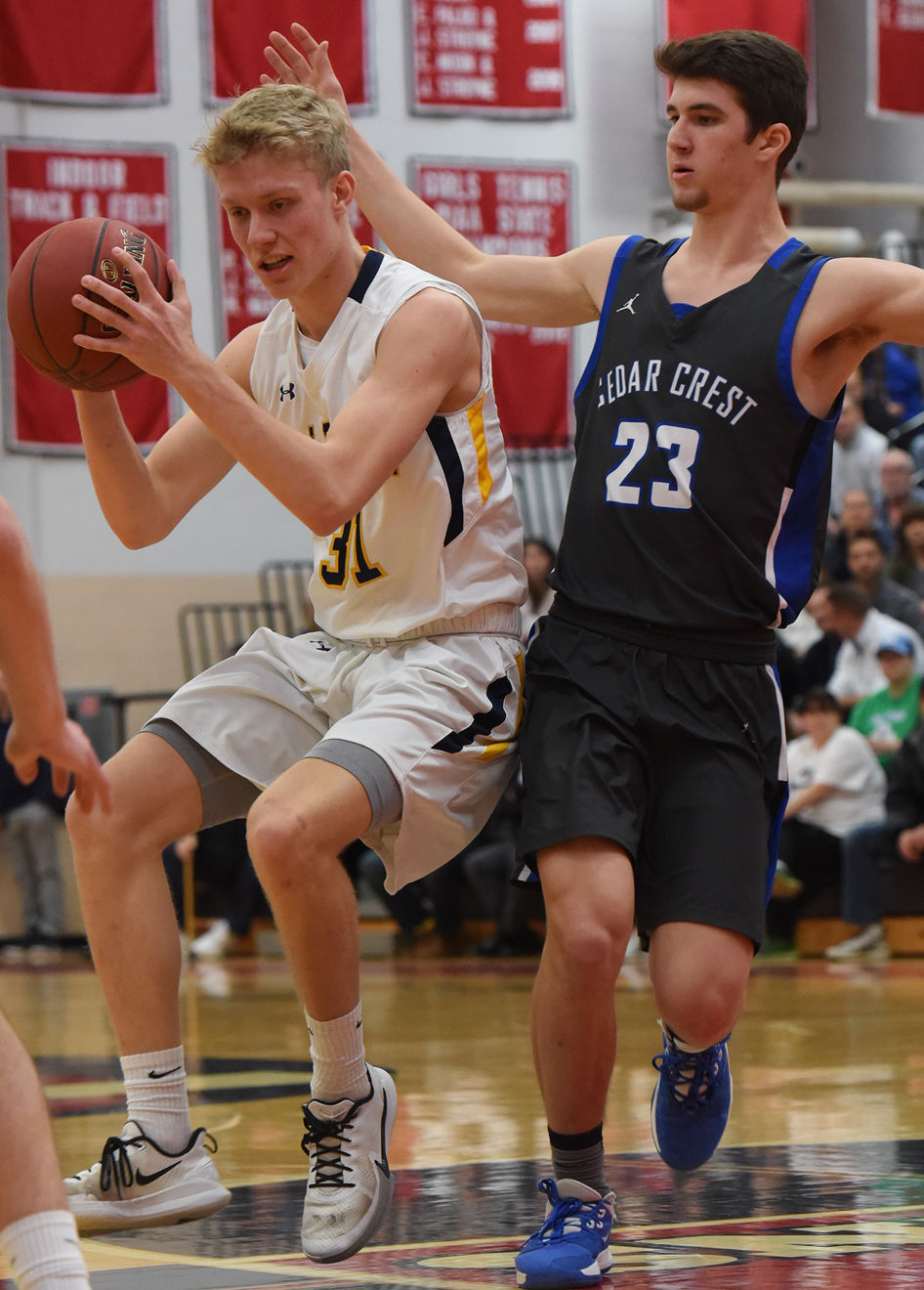 Mt. Lebanon’s Andrew Sapp drives to the basket during a PIAA playoff game against Cedar Crest. 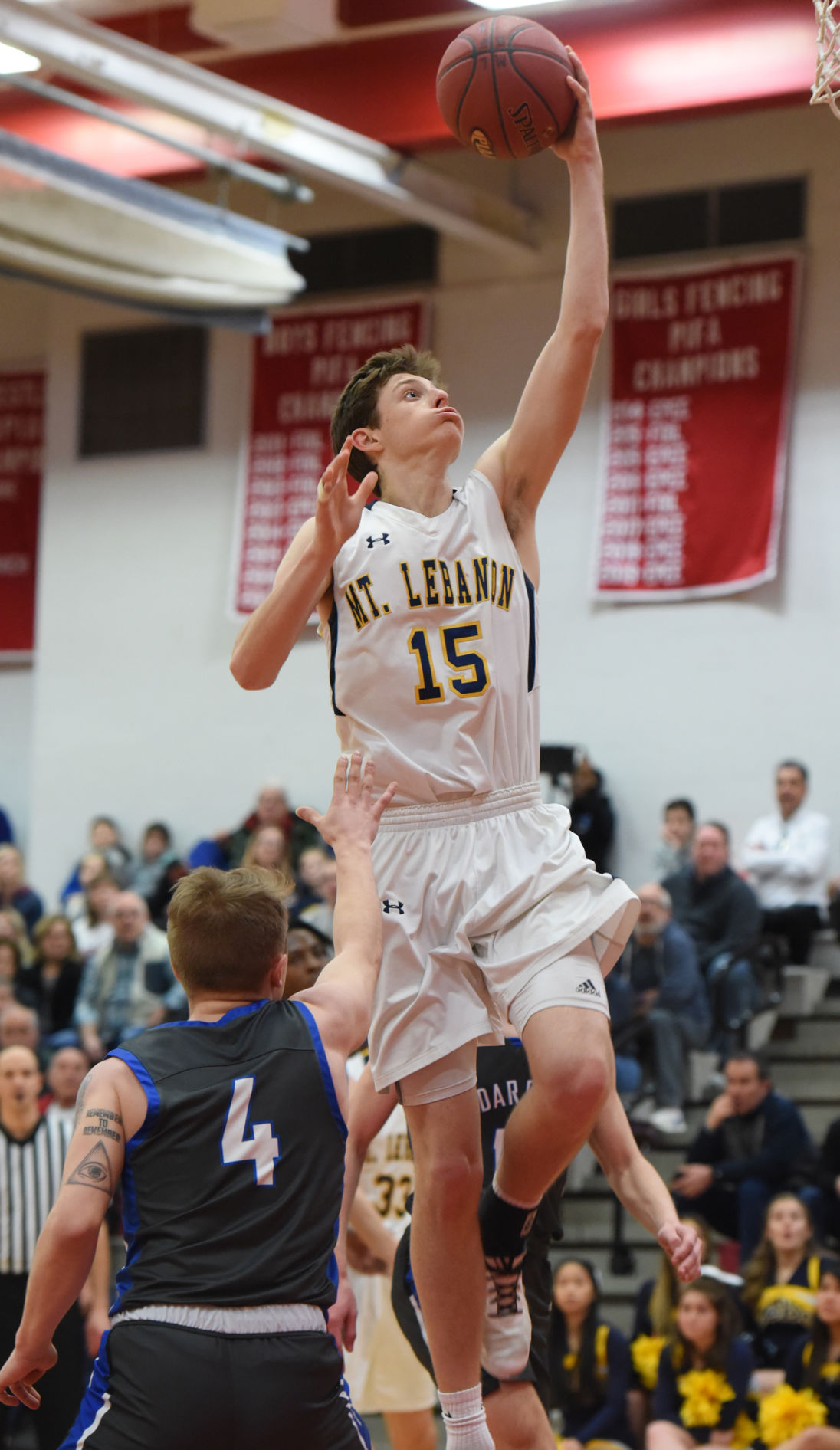 Mt. Lebanon’s Andrew Sapp drives to the basket during a PIAA playoff game against Cedar Crest.

Andy Sapp exploded for 15 points, all on 3-point field goals, in the first half of Mt. Lebanon’s PIAA first round playoff game against Cedar Crest.

“This was definitely at least one of my best halves, offensively though,” Sapp said. “But it’s not all about offense all the time, so I like to pride myself on my defense as well. Defense is more my role. It’s what this team needs.”

Sapp said his team is dangerous because it has several players it can depend upon for scoring — not just Hoffman, who averages more than 20 points per game.

“Jake’s usually it, but we have other guys that can step in,” Sapp said. “Guys just need to step up when we need them and I think we all can do that well.”

Sapp buried three 3-pointers to help stake Lebo to an 18-7 advantage. He added two more 3-pointers as the edge swelled to 35-20 by halftime.

“Andy was outstanding. He’s capable of doing that every game,” said Lebo head coach Joe David. “I was just waiting for that game to occur. He picked a nice day to have it.”

Sapp said he knew during pregame warmups he had the hot hand.

“I was shooting the ball well in warmups so I knew I could maybe get some threes to go down in the game,” he said. “When I started to hit them, I kept shooting. They were going in. It kind of just worked out.”

Despite the Blue Devils’ loss to Butler in the WPIAL championship game, Sapp said his team is focusing on its new life in the PIAA tournament.

“We didn’t get the WPIAL championship, but I think that can motivate us in states,” he said. “To really do this thing, to really make a run, I’m excited to continue in my role.

“I’ve been playing this game for as long as I can remember so I would like it to last a little longer,” he added. “I love my teammates and playing for my community. We have a lot of fun playing together and obviously, winning is the best part.”

David said defense and each player picking up the pace in different quarters was the difference against Cedar Crest.

Gartley had three 3-pointers in the third quarter and King scored 12 of his points in the fourth.

“That was not by design, but how it worked out,” David said. “That just goes to show you the distribution of our talent and our team. We have a lot of guys capable of stepping up.

“Defensively, too, we wanted to jump on them a little bit. So that worked. What we do defensively is pretty high pressure and I don’t think teams out (East) have seen that.”

Peters Township (14-11), South Fayette (16-9) and Chartiers Valley (19-6) all were eliminated in the first round of PIAA boys’ basketball playoff action.

The game was the finale for Gary Goga. The PT floor boss tendered his resignation after 15 seasons at the helm. He finished 172-177 overall with eight WPIAL playoff appearances.