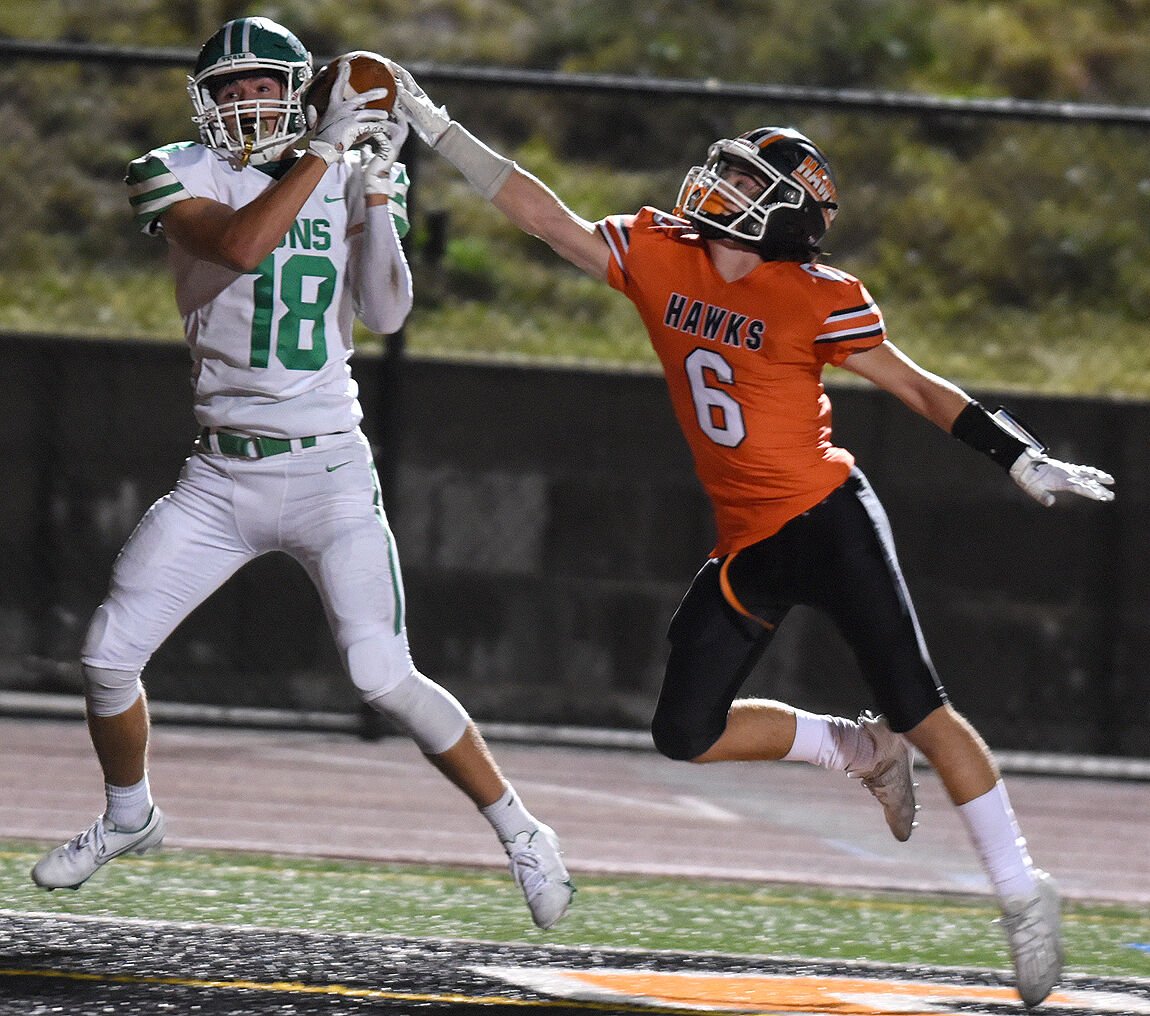 South Fayette's Ryan McGuire gets past Bethel Park defensive back Jason Nuttridge for a catch during the Lions' 23-7 victory. 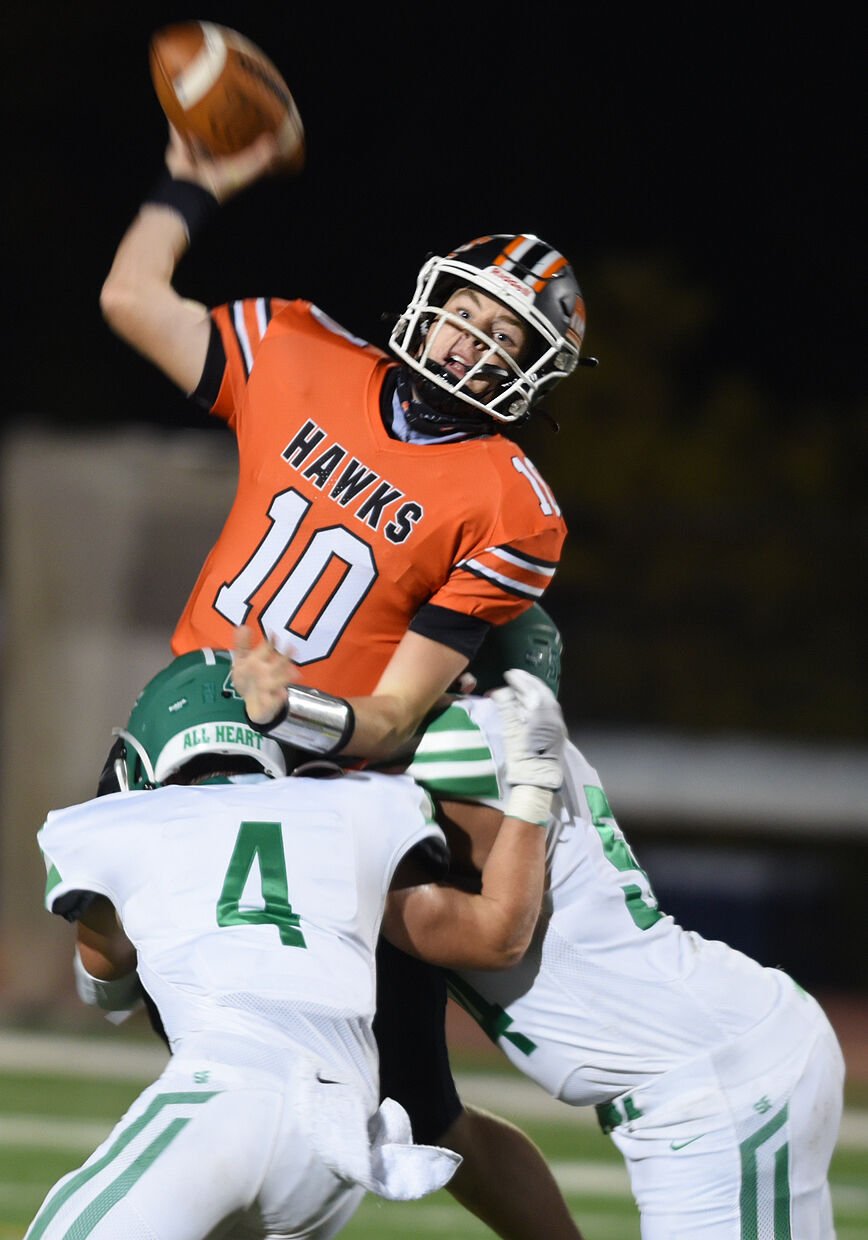 Bethel Park quarterback Max Blanc (10) gets a pass off before being tackled by South Fayette defensemen Connor Harcarik (4) and Keon Johnson (54). 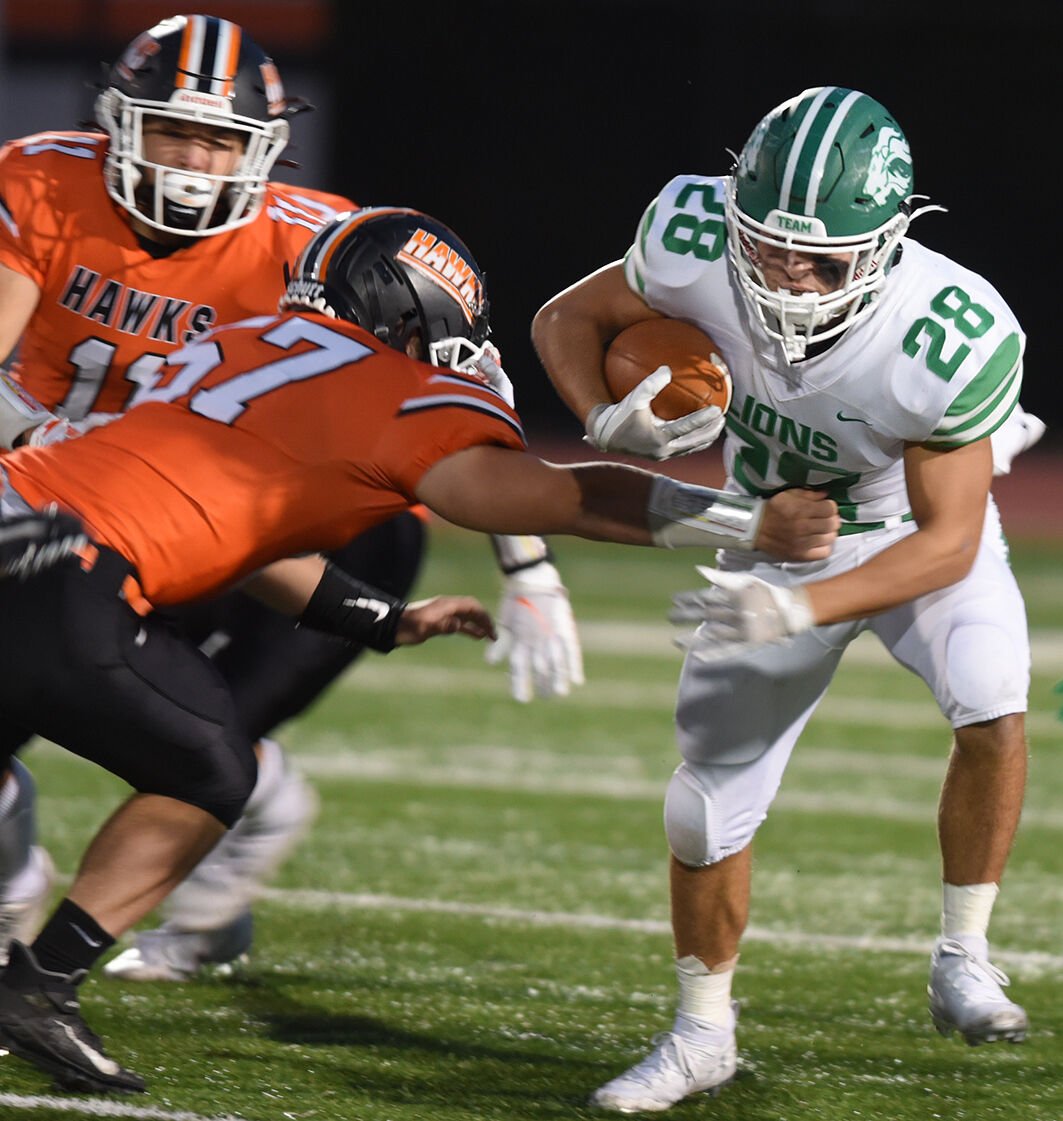 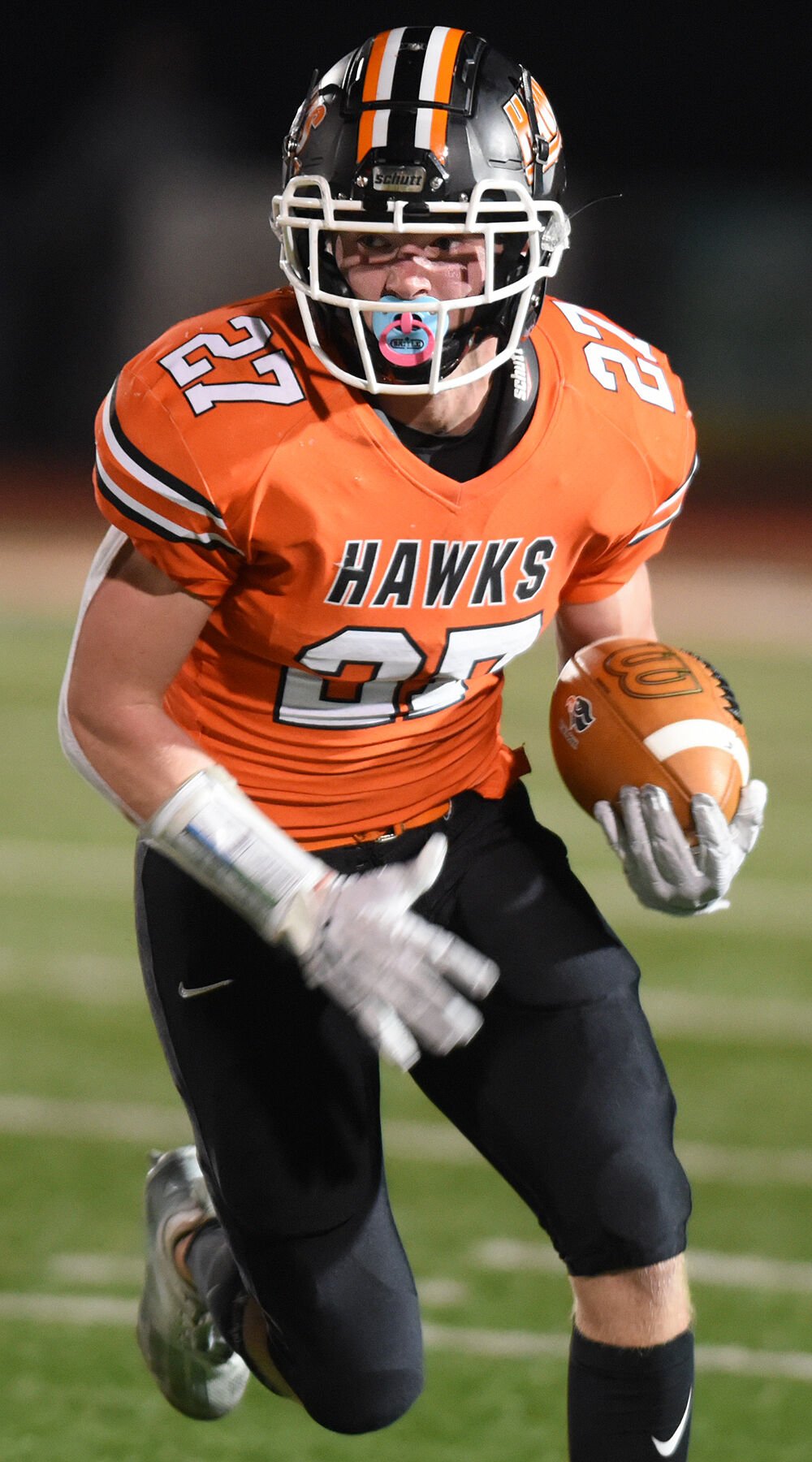 South Fayette's Ryan McGuire gets past Bethel Park defensive back Jason Nuttridge for a catch during the Lions' 23-7 victory.

Bethel Park quarterback Max Blanc (10) gets a pass off before being tackled by South Fayette defensemen Connor Harcarik (4) and Keon Johnson (54).

The Lions improved to 3-2 overall and 2-1 in the Allegheny Six Conference. It is the first season they are competing at the Class 5A level. The Lions captured back-to-back state championships in 2013 and 2014 in Class AA and four WPIAL banners, the last in 2018 at the Class 4A level.

“This conference, we are finding out every week, is great,” said Joe Rossi, who owns a 151-48 record at the helm at South Fayette. “It’s four quarters of football and our kids are getting used to that. We’re fighting hard and we are excited.”

Despite their 0-5 record, the Black Hawks saw promise in their showing against the Lions. BP lost all but one starter from last year’s quarterfinal playoff team.

In his post-game huddle, BP head coach Brian DeLallo reminded his players that there were “positive” things upon which the Black Hawks could “hang their hats.” He noted especially the “toughness” of sophomore Jason Nuttridge and junior Joe Thimons and how the Black Hawks “never tapped out” or “quit” as they played hard to the bitter end.

“We played great defense against one of the best offenses in the WPIAL,” DeLallo told his players. “You are probably getting tired of hearing that after losing, but we are going to keep focusing on the positive and eliminating the negative because we as a staff are not giving up on you guys. So don’t give up on each other because when it happens it’s going to be awesome.

“We just have to get better at ball security and handling snaps.”

Those miscues factored into the outcome. Two BP fumbles resulted in SF scores.

Shay Aitken recovered a fumble and rambled 68 yards for a touchdown, affording the Lions a 13-0 lead with 8:18 left in the first half.

South Fayette's Bryce Spolnik, who had a critical sack to close out the first-half, also recovered a BP fumble. The Lions converted the turnover into a 24-yard field goal by Justin Caputo. With 6:35 left in the half, SF a 16-0 advantage.

Lions quarterback Naman Alemada tossed two touchdown passes to account for SF’s other scores. He threw a 52-yard scoring strike to Charlie Rossi on the first offensive series of the game. He tossed an 18-yard touchdown pass to Ryan McGuire with 4:57 left in the third quarter, stretching the Lions’ lead to 23-0.

Alemada completed 10 of 23 passes for 200 yards. McGuire finished with five receptions for 97 yards.

“Shay is a great running back. Works his butt off,” Rossi said. “He does a nice job.

“Defensively, I thought we also did a nice job and our offense is starting to come around.”

Rossi noted that during the coronavirus pandemic most passing camps and 7-on-7 competitions were eliminated making it difficult for teams like South Fayette to throw the ball efficiently this season.

“When you are throwing and playing good teams and the coverage is tighter, it’s been tough,” he said, “but these guys are doing a great job.”

Troy Volpatti rushed for 112 yards and the Black Hawks’ lone score, on a one-yard plunge into the end zone with 10:48 to play.

With two weeks remaining in the regular season, DeLallo reminded his young players that “anything can happen” in the conference.

“We have a couple cracks at this,” he said. “Somebody comes in not ready to play, they are going to get beat. Anyone can beat anybody in this league so keep your heads ups.”

USC's Mateo Cepullio hauled in eight passes for 113 yards and David Pantelis had seven grabs for 138 yards and two scores.

Daniels tossed four TD aerials, three in the second half, as the Blue Devils erased a 27-17 halftime deficit.

Daniels finished 16 of 20 for 343 yards. He tossed scoring strikes of 45 and 13 yards to Alex Tecza as well as TD passes to Eli Heidenriech (78 yards) and Michael Beiersdorf (17 yards).

Heidenreich had four receptions for 147 yards; Tecza four catches for 88 yards. Tecza also rushed for a 1-yard score in the first half.

Lebo took a 10-7 lead when Casey Sorsdal kicked a 24-yard field goal in the first quarter but the Vikings responded with three unanswered scores, including one off a blocked punt return and from a 90-yard TD toss from Adam Obrin to Matt Schmitt.

In a clash between undefeated Parkway Conference foes, Chartiers Valley succumbed to Aliquippa, 35-6. The loss snapped the Colts’ four-game winning streak and best start since 2009.