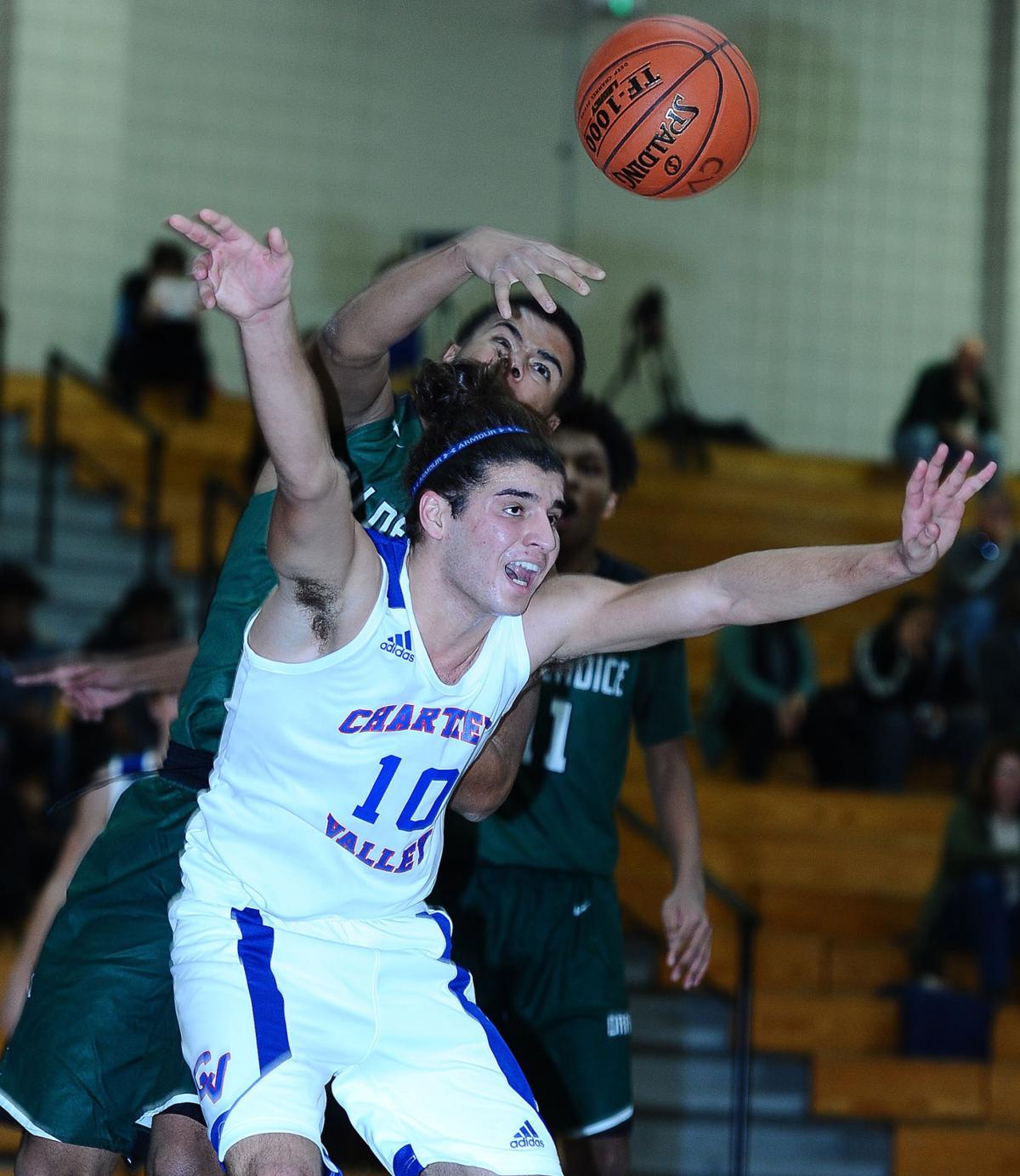 Rob Jones prevents Socrates Boulis (10) from making his way to the basket by deflecting a pass intended for the Chartiers Valley forward. During opening action in the Upper St. Clair Tip-off Tournament, Jones helped Taylor Allderdice to victory against the Colts in overtime. 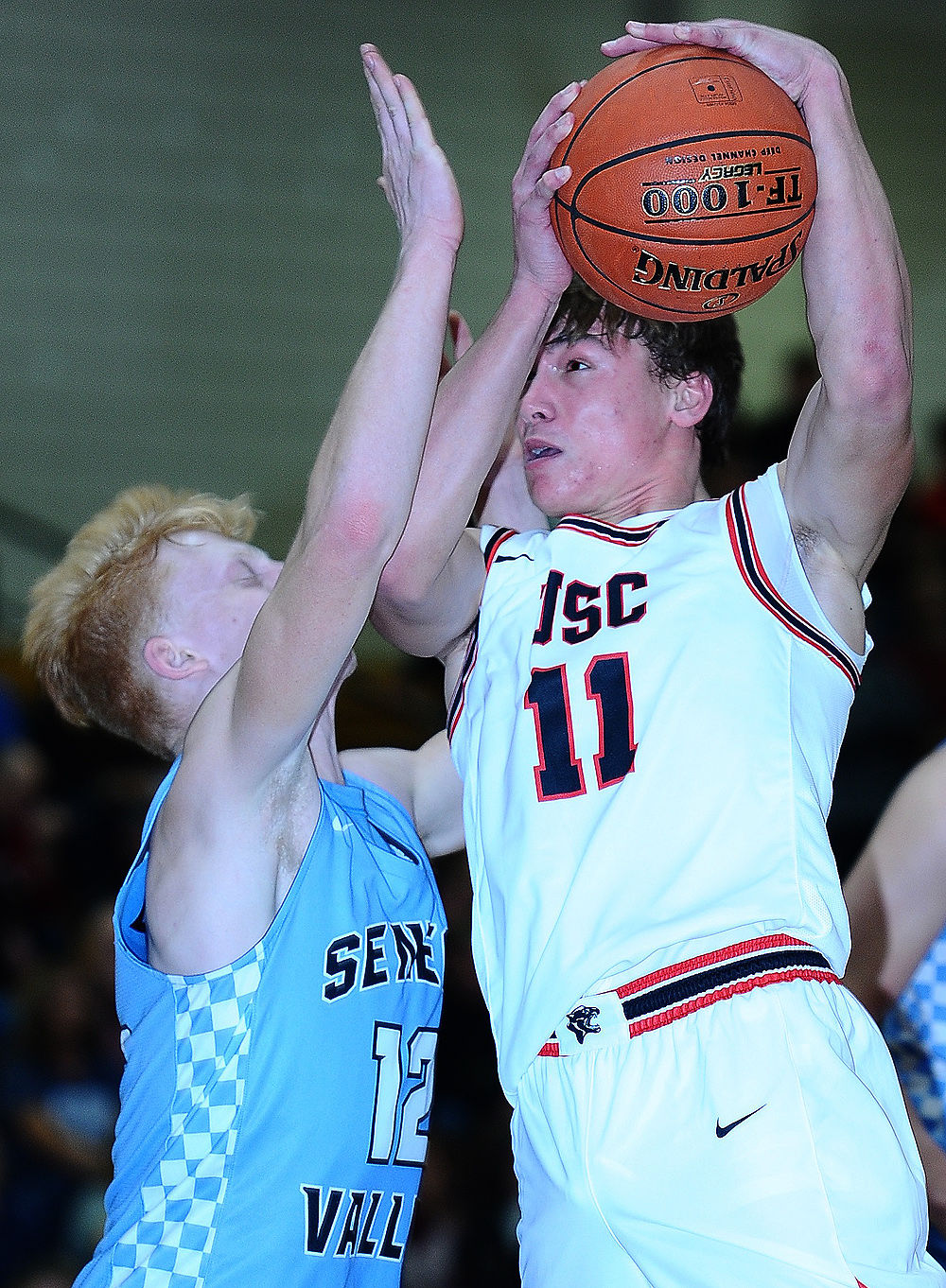 David Pantelis (11) confronts a roadblock on the way up to the basket during Upper St. Clair Tip-off Tournament action. 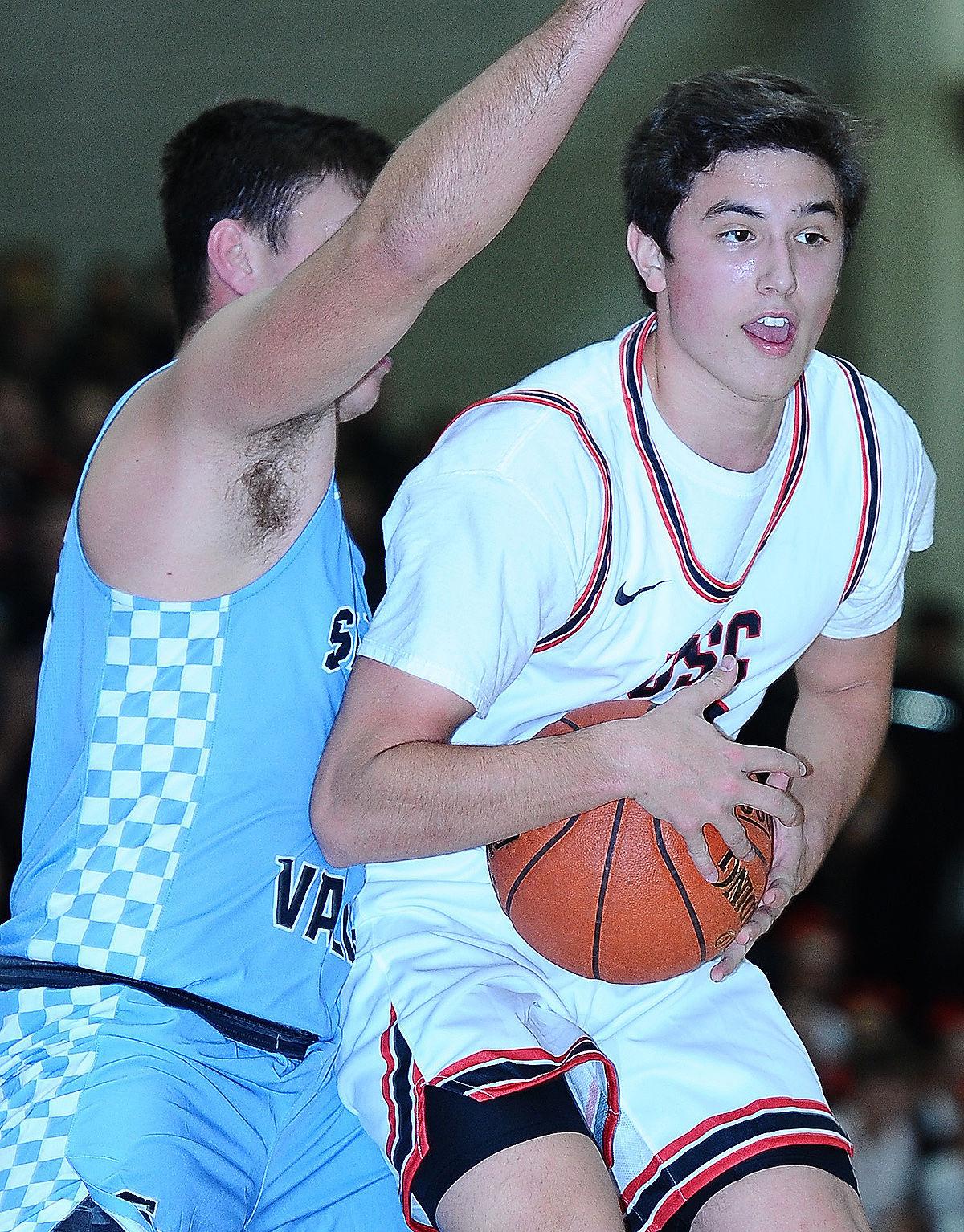 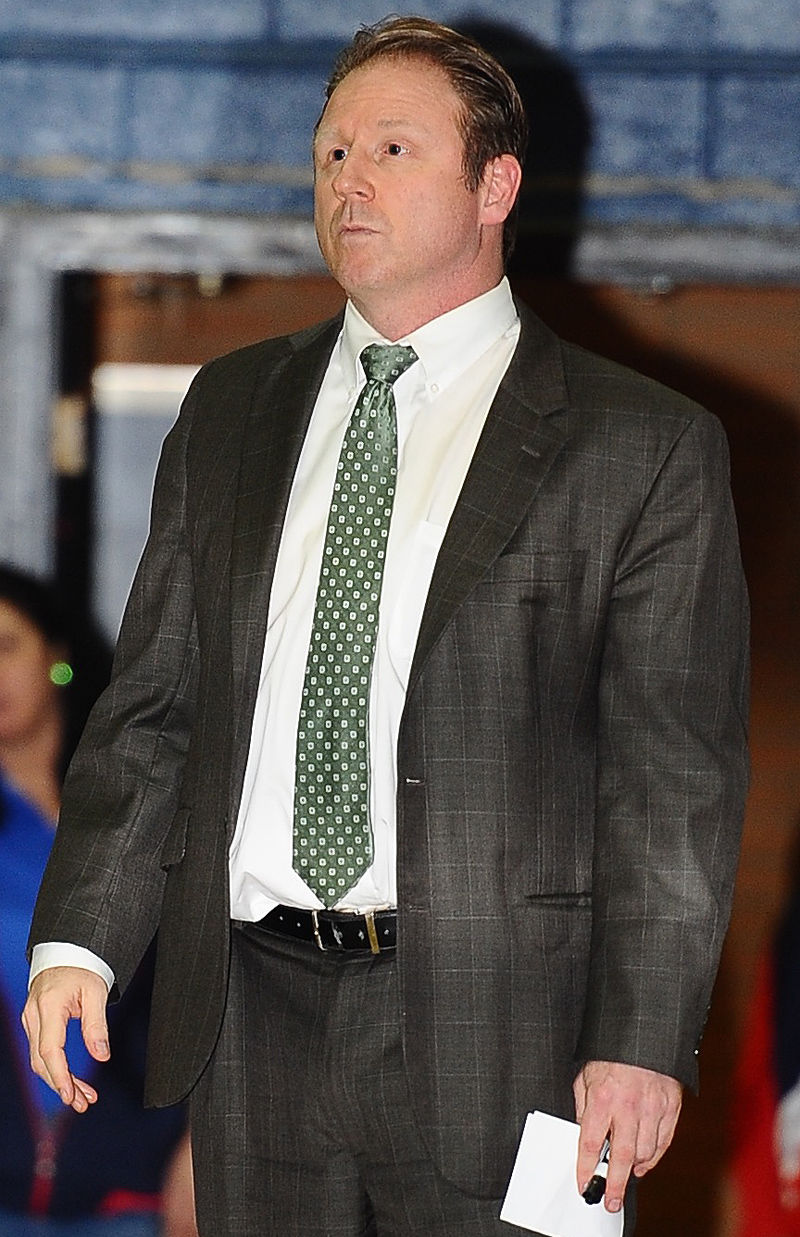 Rob Jones prevents Socrates Boulis (10) from making his way to the basket by deflecting a pass intended for the Chartiers Valley forward. During opening action in the Upper St. Clair Tip-off Tournament, Jones helped Taylor Allderdice to victory against the Colts in overtime.

David Pantelis (11) confronts a roadblock on the way up to the basket during Upper St. Clair Tip-off Tournament action.

David Mislan is hoping South Fayette continues to have a December to remember, because what the Lions learn this month will determine how successful the boys basketball team will be in 2020.

The Lions are 3-0 having opened with a championship in the South Park Tip-off Tournament before following up that triumph with a 72-66 victory against Beaver.

“We are very encouraged with our progress, attitude and work ethic,” said Mislan, “and we expect to continue to get better and learn from our mistakes.

Additionally, Mislan said for the Lions to achieve their goals, they need to “navigate” through a tough stretch of a schedule that features eight road trips in the first nine games.

“We need to continue to improve each day while we integrate some our our newcomers to find our identity,” he said. “I believe we will be playing our best basketball come January.”

The Lions demonstrated they are ready to go toe-to-toe with section foes like Chartiers Valley, Montour and Trinity. South Fayette edged the host Eagles, 61-60, and Cornell, 80-73, to win the South Park tournament.

SF’s four returning starters led the way and blended well with Brandon Jakiela. The sophomore filled out the starting line-up and is one of five newcomers expected to make a difference this season.

Kade St. Ledger exploded for a game-high 29 points against Cornell. The junior pulled down 10 rebounds. He scored 18 points and eight rebounds in the win against South Park.

Connor Mislan provided 14 points, six assists and three steals against Cornell. The senior pumped in 13 points, including seven in the final quarter as well as the game-winning field goal at the buzzer, against the Eagles. He also collected six assists.

Drew Franklin missed the championship contest because of a family funeral, but provided six points, seven rebounds and seven assists against Cornell.

“Our senior leadership was fantastic throughout,” said Mislan. “Drew, Connor and Joe all made impact plays in the last two minutes against Cornell.”

Mislan said the trend continued in the championship as his son scored seven of the Lions’ last 10 points, including the buzzer beater, and Alcorn buried a “huge 3” down the stretch.

Additionally, Dom Thomas came through in the final. The senior pitched in nine points and grabbed six rebounds.

“The team played extremely unselfish,” Mislan said of the tournament. “We played very gritty, particularly down the stretch in both games.”

Because they are quite experienced, the Lions are playing well out of the gates.

Meanwhile, Mislan, Franklin and Alcorn have played together for three years. The seniors are returning starters along with St. Ledger.

A two-time, first-team all-conference selection, Mislan led the Lions in scoring last season with a 15-point average. He also dished up four assists and grabbed three rebounds a game.

In addition to Jakiela, the Lions are relying on five additional newcomers. Logan Yater and Landon Lutz, like Jakiela, are sophomores while Danny Beck and Jake Dunay are juniors.

While the Lions continue to mesh together, they are also working on their limitations.

“We need to be a better rebounding team and create some easier baskets,” Mislan said, “but our guard play is our team’s strength. We are experienced at all three spots and have depth at all those guard positions.

“We are pleased with our progress and intent to keep getting. We plan to be playing our best basketball later in the season.”

Upper St. Clair and Mt. Lebanon tipped off the scholastic boys’ basketball season by capturing the championship in their own tournament.

The Panthers defeated Seneca Valley, 77-52, in the opener and Taylor Allderdice, 74-61, in the final.

In the championship contest, Andrew Casey and Luke Gensler tossed in 15 points each while David Pantelis and Josh Russell pitched in 12 and 11 markers.

Against the Raiders, Russell, Casey and Pantelis each tallied 10 points.

The Panthers followed up the victories with an overtime loss to Pine-Richland, 57-56.

Meanwhile, Jake Hoffman has paced Lebo to a 3-0 start. The senior exploded for 30 points in each of the victories.

In the process, he earned MVP honors in leading the Blue Devils to tournament wins against Obama Academy, 81-46, and Altoona, 73-36. The Blue Devils also beat North Allegheny, 75-39.

Tommy DiReinzo lit it up for 51 points as the BP boys blazed to victory, 107-80, against Trinity. DiRienzo buried nine, 3-point field goals.

Previously, the Hawks beat North Hills, 70-53, but lost to Fox Chapel, 55-48, in tip-off tournament action. Against the Foxes, Meis exploded for 27 points.

The USC girls beat Fox Chapel, 43-34, but lost to Quaker Valley, 34-24, in the championship of the Quaker Valley Tournament.

Against the Foxes, Mia Brown fired in 16 points. She and Ava Keating earned all-tournament honors.

South Fayette succumbed, 50-38, to Beaver in the championships of the Lady Lions’ own tip-off tournament. Clare Relihan and Maddie Webber scored eight points each for the Lady Lions in the loss.

Peters Township defeated Thomas Jefferson, 65-48, however, the Indians dropped decisions to Central Catholic, 58-38, and North Catholic, 54-35, to start the boys' hoop season at 1-2.

Against the Jaguars, Colin Cote topped 20 points. Sam Petraca and Connor Duane pitched in 14 and 13 markers while Julian Mascio followed with eight tallies.

Cote and Petraca were the leaders in the losses. Cote fired in 15 against North Hills and 12 against Central. Petraca pumped in 10 tallies in both games.