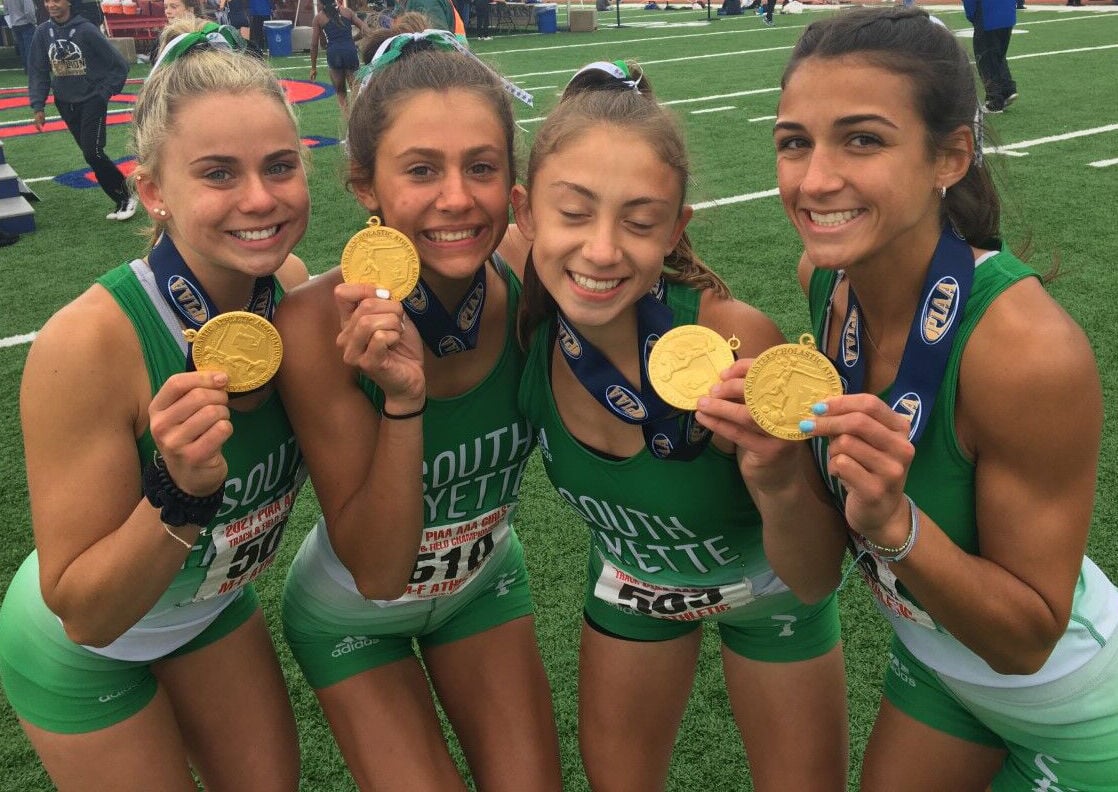 South Fayette's Amanda Marquuis, Malana Schumaker, Olivia Renk and Amy Allen show off the gold medals they earned after winning the 4x100-meter relay during the PIAA track and field championships held May 29 at Shippensburg University. 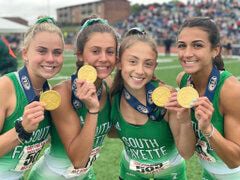 South Fayette's Amanda Marquuis, Malana Schumaker, Olivia Renk and Amy Allen show off the gold medals they earned after winning the 4x100-meter relay during the PIAA track and field championships held May 29 at Shippensburg University.

South Fayette’s track season did not end May 29 with an historic gold medal in the 4x100-meter relay during the PIAA championships in Shippensburg.

The Lions will compete, along with the 4x400-meter unit, in the Outdoor National Championships to be held July 1 at Hayward Field on the University of Oregon campus.

“We are all really excited about this opportunity,” said SF head coach Scott Litwinovich, who added he is confident his runners are up to the challenge.

The Lions demonstrated their mettle throughout a coronavirus pandemic that saw them lose a track season in 2020 to accomplish something never before achieved in the history of the program.

Amanda Marquis, Melana Schumaker, Olivia Renk, and Amy Allen combined for that feat when the group lowered its school record to win the event in 47.85. The foursome clocked a 48.17 in winning a WPIAL title May 19 at Slippery Rock University.

“The 4x100-meter relay accomplished exactly what we knew they would be able to do,” said Litwinovich. “I actually sent them a text before the race that reminded them they didn’t need to do anything different from the WPIAL meet.

“I was actually very impressed with their calm and demeanor,” he continued. “To perform that well on the biggest stage in the state says a lot about their preparation and confidence.”

Allen, who has anchored the relay for four years, said her teammates worked hard at practice every day since missing out on last season when all spring sports in the state were canceled in 2020 because of COVID-19.

“I don’t think any of us were expecting this to happen especially if you would have told us we would be state champs at the beginning of the season,” Allen said. “Since my freshman year, we haven’t even qualified for states. So to win a gold medal my senior year is insane.”

Allen said the Lions overcame obstacles to reach the top of the podium. The weather posed the biggest opposition.

During the week, the group tracked the storms that beset the track at Shippensburg University and pushed some events like the high jump and pole vault indoors. The Lions practiced handoffs in the rain up until they boarded their bus for Shippensburg and they stayed warm until their race began.

“We embraced the fact that we were going to have to deal with the weather,” Allen said. “We also got a lot closer as a team. All that leading up to our run made us want to work harder for each other during the race.

“I have never experienced anything like it before,” she added. “Winning a state championships is unbelievable but to share the experience with my teammates and coach Lit, who put so much effort into working with us all year, is even more exciting. It has been great to share the success with everyone.”

Litwinovich said Allen could have placed higher in both individual events had she not run in the relays. That thought never crossed her mind, he said, because Allen is the ultimate track teammate.

“It was more important for her to take a chance to win with the rest of the team than to focus on herself,” Litwinovich said. “We have been so lucky to have her as a leader and member of this track team for four years. She has probably had one of the most decorated high school track careers in recent memory and certainly for our program.”

Before she left Shippensburg to focus on graduation and her upcoming enrollment at Duquesne University, Allen added to her medal collection. She helped the 4x400 relay capture a fourth-place medal. She led off the unit that included Baylee Carpenter, Emma Fleck and Marquis. The group clocked a 3:57.80, which was 1.55 seconds faster than their WPIAL championship time.

“We went out and did everything we were expected to do,” Allen said of the relay, which was seeded fourth. “It was exciting that we could get on the podium as a team. I think we deserved that.”

Allen said she had been running the 4x400 with Fleck since the two were freshmen. They have been paired with Marquis and Carpenter for two years.

“So, I’m happy we finished on a good note with a state medal,” Allen said.

“All three relay teams qualified for the PIAA championships and earned a spot on the podium,” Litwinovich said. “That is a feat that will be very hard to duplicate.”