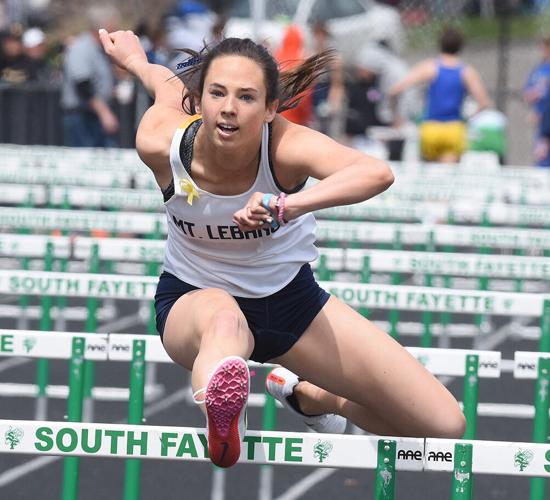 Megan Cain clears the hurdle on her way to victory. During the South Fayette Invitational, Cain won both the 100- and 300-meter events and helped Mt. Lebanon to a runner-up showing in the team standings. 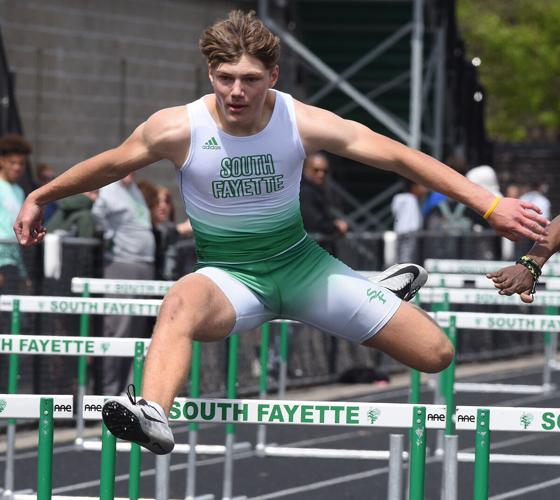 Michael Gimigliano bounds over the hurdles. He finished first in the 300 hurdles and second in the 100 event and helped South Fayette to a runner-up showing in the team standings. 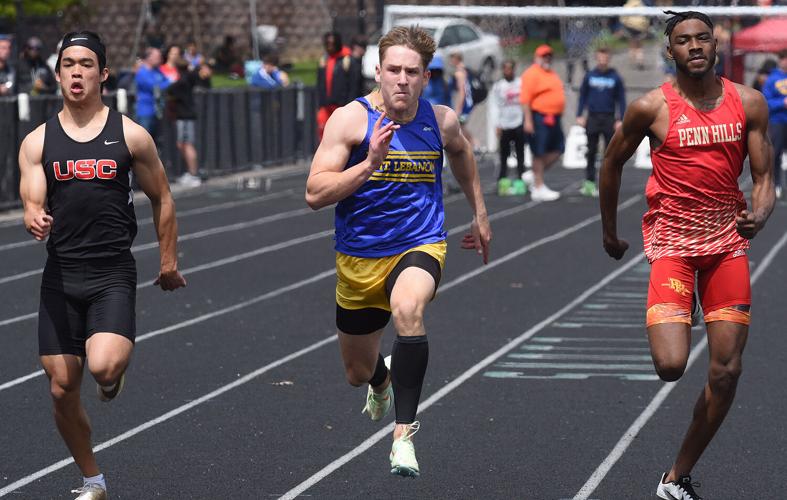 Megan Cain clears the hurdle on her way to victory. During the South Fayette Invitational, Cain won both the 100- and 300-meter events and helped Mt. Lebanon to a runner-up showing in the team standings.

Michael Gimigliano bounds over the hurdles. He finished first in the 300 hurdles and second in the 100 event and helped South Fayette to a runner-up showing in the team standings.

South Fayette and the Lebo ladies finished 1-2 in the team standings with combined scores of 149 and 83.50 points. The Upper St. Clair girls followed in third place with a 66.50 score.

Lebo won the boys team title with 107 points. Taylor Allderdice was the runner-up while the Lions took third place with a 58 score.

Melanie Schumaker paced the Lady Lions. She won the pole vault with a personal record of 12 feet, 3 inches. She also ran a leg on the winning 4x100 relay unit that included Dea Monz, Amanda Marquis and Olivia Renk.

A Youngstown State recruit, Schumaker also secured silver in the long jump ahead of USC’s Evie Ellenberger (third) and Emily Powell as well as her own teammate Grace Howard.

Howard and Sydney Bair finished 1-2 in the high jump ahead of USC’s Tayla Kurzawa. Ellenberger and Lebo’s Molly McKenna followed in fifth and eighth place.

Erica King dominated the throwing events, winning both the discus and javelin for the Lady Lions. Lebo’s Hailey Latona was fifth and fourth in the respective events while Chartiers Valley’s Eva Tokar medaled with seventh and eighth places. Bethel Park’s Ella Milliken was eighth in the discus.

Other SF champions included: Lily Colombo in the 800-meter run and Lauren Iagnemma in the 3,200. Colombo and Iagnemma combined with Siya Joshi and Zoe Poe for second place in the 4x800 relay behind the Lebo foursome of Justine Meta, Kate Mooney, Emma McGreevy and Caroline Adams.

Lebo’s Megan Cain was a double winner in the 100- and 300-meter hurdles. Her teammate, Julianne Gallo, secured second in the intermediates and fifth in the 100 hurdles.

Others to pick up points, contributing to the Lady Lions’ victory, were: Emily Sinton, third in the 400; Poe, seventh in the 800; Sadie Mohnkern, sixth, 1600; Gabby Baiano, fourth and seventh in the 1,600 and 3,200, respectively; Evabella Cox, third in the hurdles; Bair, seventh, triple jump.

Other top performers on the girls side included: USC’s Jaclyn Martinelli, who took second in the 1,600 and 3,200 runs and Lydia Rhodes, who took sixth in the 3,200 and helped the 4x800 relay of Molly Maher, Mia Skeel and Meredith Rhodes finish sixth.

Anderson winsDepth proved the difference for Lebo in the boys division as the Blue Devils produced only one individual champion in earning their team title.

Brendan Anderson led a sweep of the 400 dash. He won the race in 51.36 while teammates Connor Rychcik and Nicholas Hendrick followed in second and third place. CV’s Jeremy Uher and Ethan Snyder finished fifth and sixth.

In the 200 dash, Anderson and Rychcik scored fourth and fifth ahead of BP’s Jaden Goodman.

Andrew Freedy and Luke Cramer were silver medalists for the Blue Devils in the discus and triple jump respectively. James Kline took third in the discus.

Cramer added fifth in the 100 and eighth in the 300 hurdles while Fritz Stengel was eighth and third respectively.

Michael Gimigliano was the lone winner for SF. He finished first in the 300 hurdles. He added second in the 100 hurdles and ninth in the high jump, which was won by CV’s Max Lewis.

Borgesi and Galioto combined with Tim Danziger and Zack Warchol for second in the 4x800. Individually, Borgesi, Galioto and Warchol took second, fifth and eighth in the 800 run.

Jadon Peterson (eighth, 1,600); Alaa-Eddine Guetari and Danziger (fifth and sixth in the 3,200) and Nate Sinton (third, triple jump) completed the scoring for SF.

Individually, Max Blanc took second in the javelin while Isaac Nirella earned a similar medal in the pole vault.

USC and CV had medal winners at the meet. For the Panthers, Carter Chui, Evan Sarkett, Cole Jooste were fifth, fourth and third in their respective events —100 dash, 800 run and 1,600. For the Colts, Kaden Crump, Tyler Glover and Eric Allen were third, eighth and seventh in their races — 800 run, shot put and discus.

In winning the discus, Gavlik shattered the school record with a throw of 146 feet, 11 inches.

Kaitlyn Divine and Halley Rist also were gold medalists for the Indians.

The South Fayette girls and the Mt. Lebanon boys advanced to the WPIAL team championships for track and field.

The finals will be held at 3 p.m. May 11 at West Mifflin High School.

Tickets are $10 and available at the gate or in advance at www.gofan.co/wpial.

SF will battle Butler, Norwin and North Allegheny for the title.

The Blue Devils will battle North Allegheny, Norwin and Butler in the boys’ championship meet.

Butler is the defending WPIAL Class AAA champion in both boys’ and girls’ track.