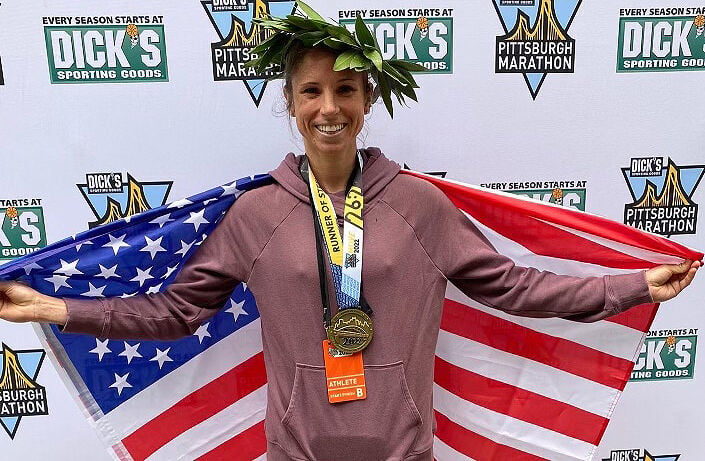 Nicole Hilton of South Fayette won the women’s division of the Pittsburgh Marathon. 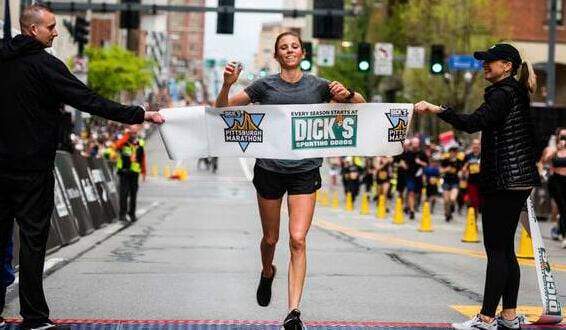 Nicole Hilton of South Fayette crosse the finish line of the Pittsburgh Marathon in first place.

Nicole Hilton of South Fayette won the women’s division of the Pittsburgh Marathon.

Nicole Hilton of South Fayette crosse the finish line of the Pittsburgh Marathon in first place.

Nicole Hilton of South Fayette surprised herself when she won the Pittsburgh Marathon on May 1.

“Never expected that,” she said of her first 26.2-mile race.

Joe Winans, on the other hand, was less than shocked.

More than a decade ago, Hilton made a lasting impression on Winans.

The South Fayette cross country coach had just completed the Great Race. Recovery drink in hand, he headed back to the finish line to cheer on the other participants. A mere minute past and a young girl, clad in a Kelly green SF basketball t-shirt ended her 6.2-mile journey.

“I tracked her down and I told her, ‘I don’t know what other sports you play but I can guarantee you are not as good at those as you will be at running.’”

After a lot of coaxing and conversations, Hilton agreed to run winter track.

“It was a chance encounter on a great fall afternoon but it was the catalyst,” Winans said.

Hilton recollected the chat and she agreed.

“I give Coach all the credit,” she said. “If he had not pursued me, I never would have considered running. He realized the potential that I did not realize in myself.”

However, she always enjoyed running with her father, Jamie. The pair have run numerous events together such as the Turkey Trot, Great Race, EQT 10-miler and Crested Butte 5K in Colorado. Many of these fun runs have also included Hilton’s younger sister, Natalie, who ran for the University of Pittsburgh after her own scholastic career at South Fayette.

“It’s the joy or running,” Hilton said. “I just run for fun and I think that is the reason why I have done so well.”

Once she shifted gears, Hilton blossomed into a track star at South Fayette.

Hilton raced for the Buckeyes at Ohio State University while she pursued a degree in kinesiology. She enjoyed early success, becoming one of a handful of freshmen from around the country to individually qualify for the NCAA cross country championships. Hilton also competed in a variety of races for the track team, including the steeplechase.

“Nicole took to running at all levels,” Winans said. “She possesses one of the biggest assets an athlete can have and that is her ability to adapt. She was able to handle and adjust to a bump up in distance and training as well as running with regularity.

“So it wasn’t surprising that she handled the marathon as well as she did,” he added. “When you talk about talent and skill, Nicole brings a lot to the table. She is motivated. Plus she has that intangible quality of being level-headed and even-tempered. Not a whole lot gets her shaken or rattled.”

Lightning and thunder did not phase Hilton in her march to the finish line in 2:49.49.

“I was about halfway through it at that point. I kept saying to myself ‘please don’t cancel’ because I was feeling pretty good,” Hilton said. “Once I headed into Oakland, I felt my legs. Those hills are wicked and the back half of the course is more difficult than the first half but I kept fighting, especially through the torrential downpours.”

Mile 24 proved the hardest for Hilton

“I could fee the wheels falling off,” she said. “It got difficult at the very end but I thought, ‘You can do this. You’ve got to make it’ and I was able to make those last two miles.”

Hilton’s training prepared her for the severe conditions she faced in the race.

Though she registered for the marathon in November of 2021 and smoked Winans in the annual Turkey Trot, Hilton did not start her marathon training until New Year’s Day. She had mapped out a four-month program. It was no resolution, Hilton said, rather Jan. 1 just fell perfectly on the calendar.

Regardless of marathon training, Hilton typically rises at 5 a.m. to go for a daily run before she showers, eats breakfast and goes to work as a physical therapist in Bridgeville. Typically, Hilton logs 30 miles a week. The mileage bumped up to 50 for the marathon with longer runs of 18 to 20 miles reserved for weekends.

“I had to have a big buildup to get up to the distance. So that was a challenge,” said Hilton. “The winter weather though was difficult. There were a lot of snowy, icy, windy, cold long-run days.”

Hilton noted those runs were negotiated in worse weather than the conditions she encountered in the marathon.

As a result of her Pittsburgh win, Hilton qualified for the Boston Marathon. She is entertaining thoughts of competing in that prestigious race but she has no intentions of pursuing the dream of an Olympian or professional runner, though she won’t turn 30 until Oct. 15.

“I’d like to do Boston. It would be a great experience,” she said.

The timing could be tricky because Boston is usually in mid-April and Hilton said she certainly wants to try to defend her Pittsburgh title next May.

“I run more for myself, and I know how competitive I am and how you can easily get on the crazy train and how running can become intense,” she said.

“As great an opportunity as the thought of Olympic Trials is or being a professional, I don’t want to go in that direction. It would be a neat experience but the training has to be more focused. I wouldn’t say it’s off the table but I don’t want to put all my eggs in one basket and get too involved that I don’t enjoy the process or running.”

Another day at the office

Nicole Hilton just won the Pittsburgh Marathon. So what did she do next?

Unlike other famous champions, the South Fayette High School graduate did not make a victory stop to Disney World.

Rather, she put in a full day of work at the Ridgeview Physical Therapy & Wellness Center in Bridgeville. Her shift did not end until 7 p.m.

“Mondays are usually very busy but fortunately it was a slower day. Steady but not crazy,” Hilton said. “I was tired by the end of the day.”

Hilton said she never considered taking time off to recovery form completing her first 26.2-mile race. She finished the race in 2:49.49, well under the 3-hour limit she had targeted for herself.

“I knew I was going to hurt but I did not expect to run that pace and that hard,” she said. “So I did not know what was coming and how I would feel.”

Hilton was ecstatic about her triumph. She earned a $7,000 paycheck and a spot in next year’s Boston Marathon. Plus, they placed a wreath upon her head as the victor.

“I had no idea about the prize money. I guess I can get my cable back,” Hilton laughed. She had canceled her subscription only a month earlier.

“I was just really excited to win,” she continued. “It was thrilling. I felt like an Olympian. But anything more than that, I think I’ll keep to my day job.”