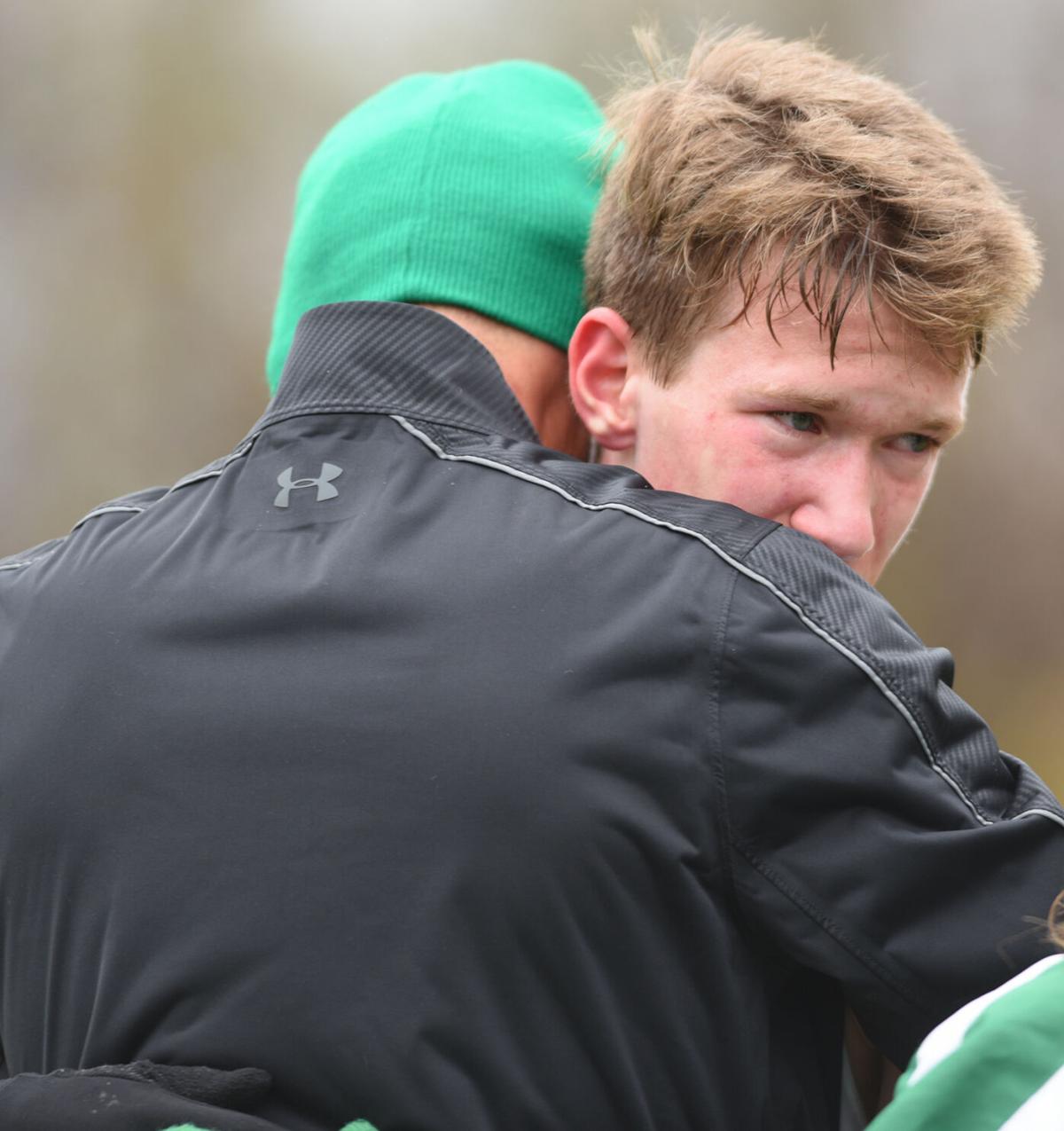 Aaron Skerbetz of South Fayette gets a conciliatory hug from his father after just missing out on a PIAA berth. The senior finished 43rd overall with a 17:25 time during the WPIAL Class AAA boys cross country championships. 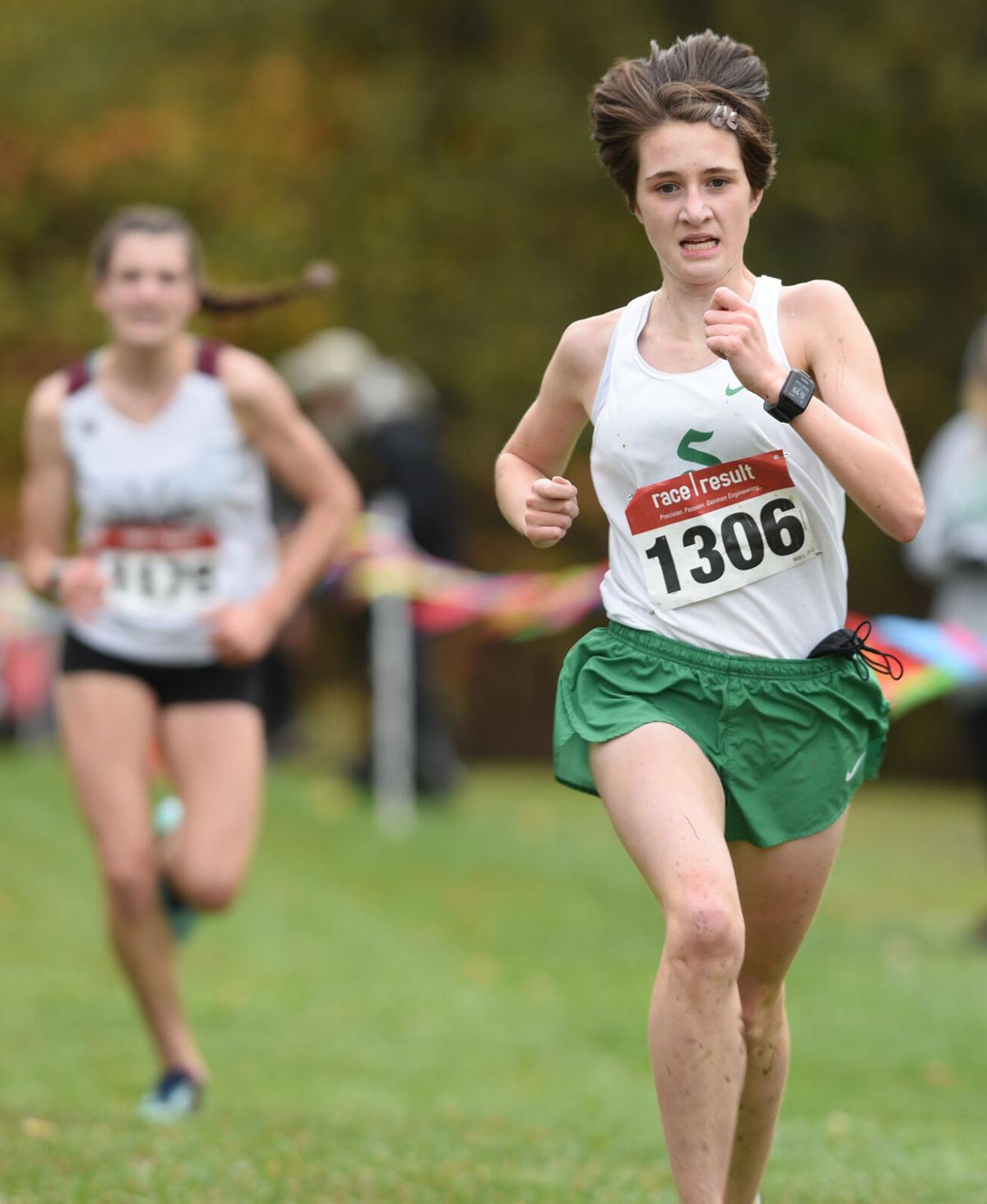 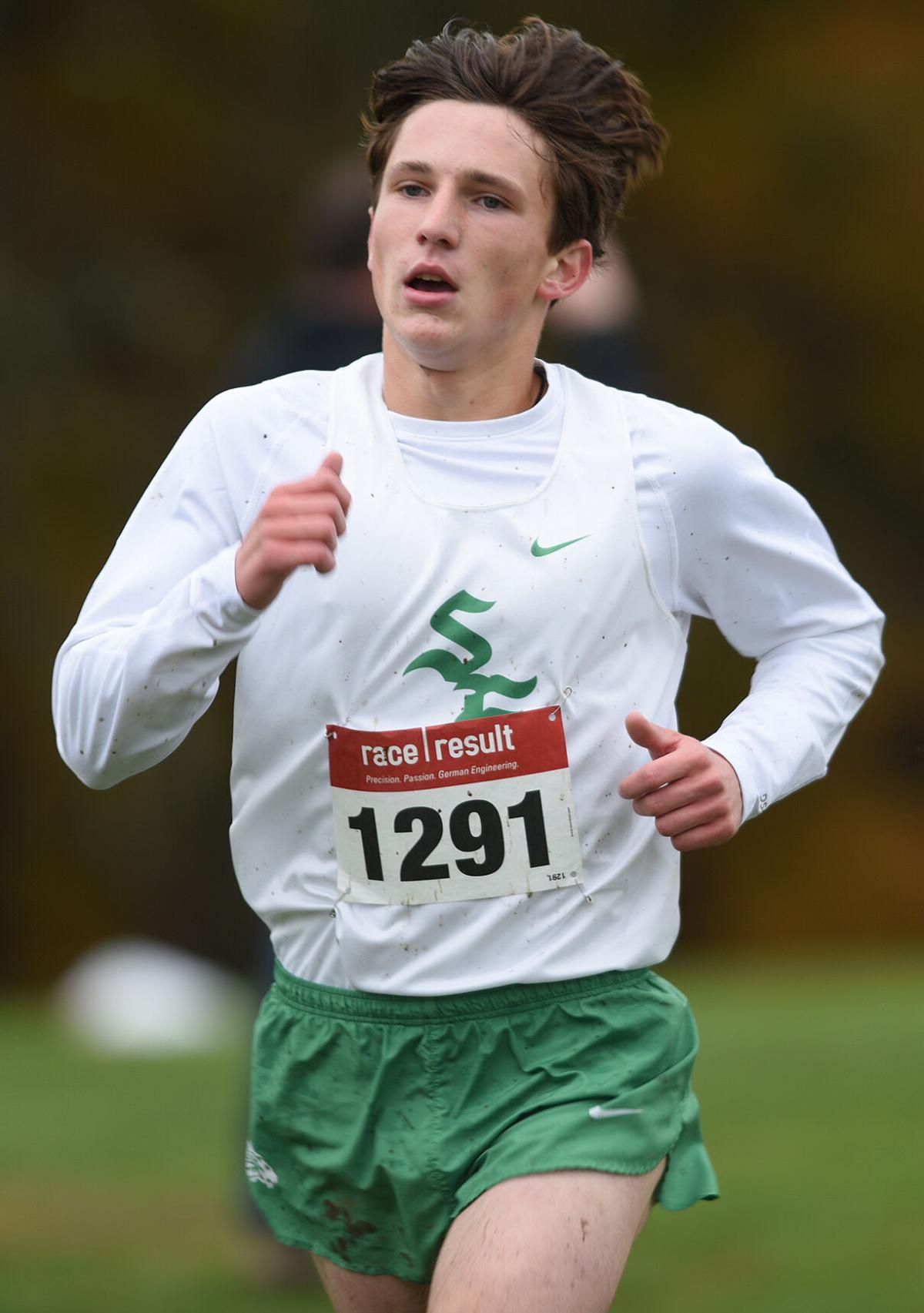 Jake Borgesi placed 13th overall in 16:32 during the WPIAL Class AAA boys cross country championships and qualified for the PIAA meet to be held Nov. 7 in Hershey. 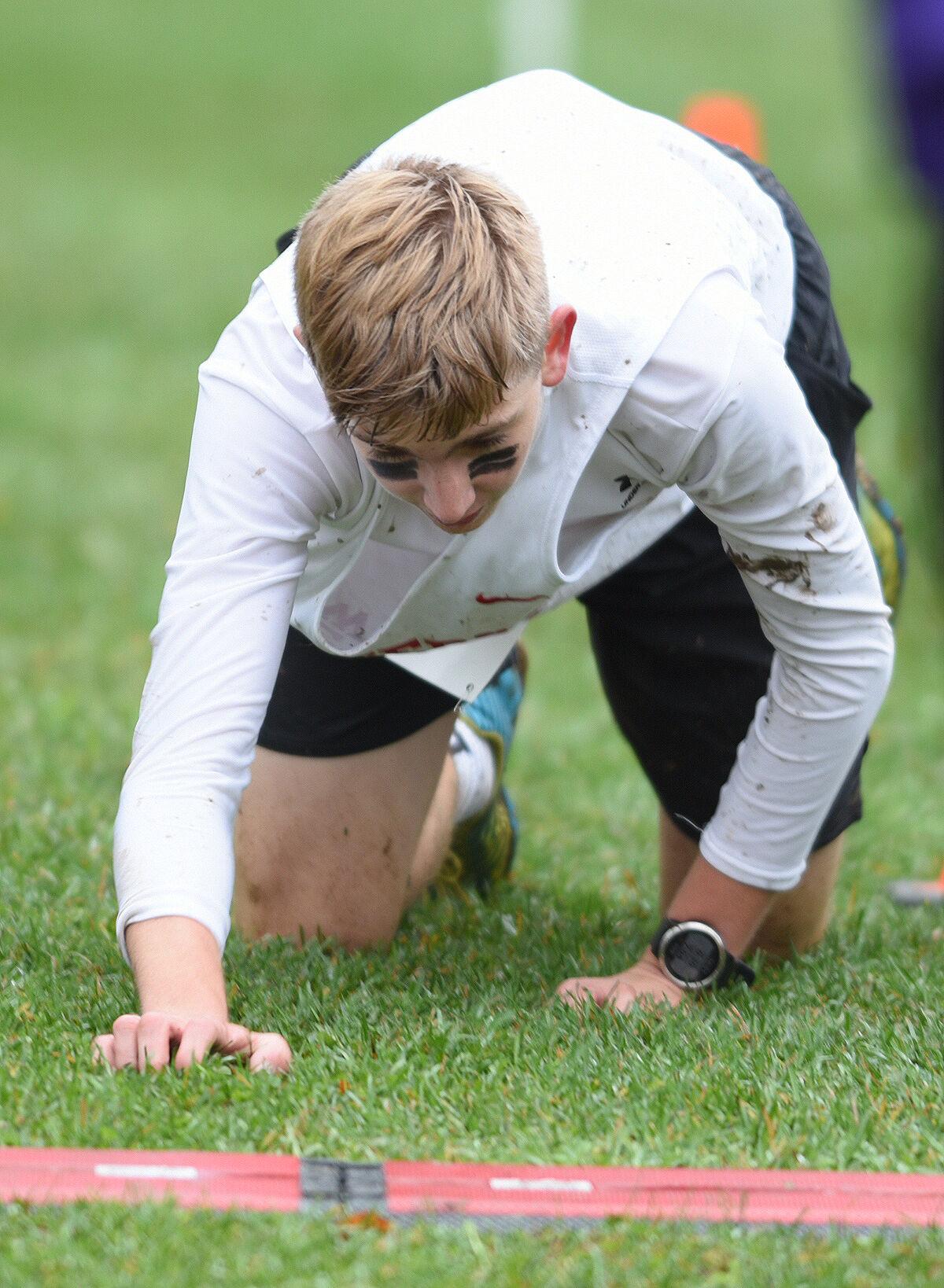 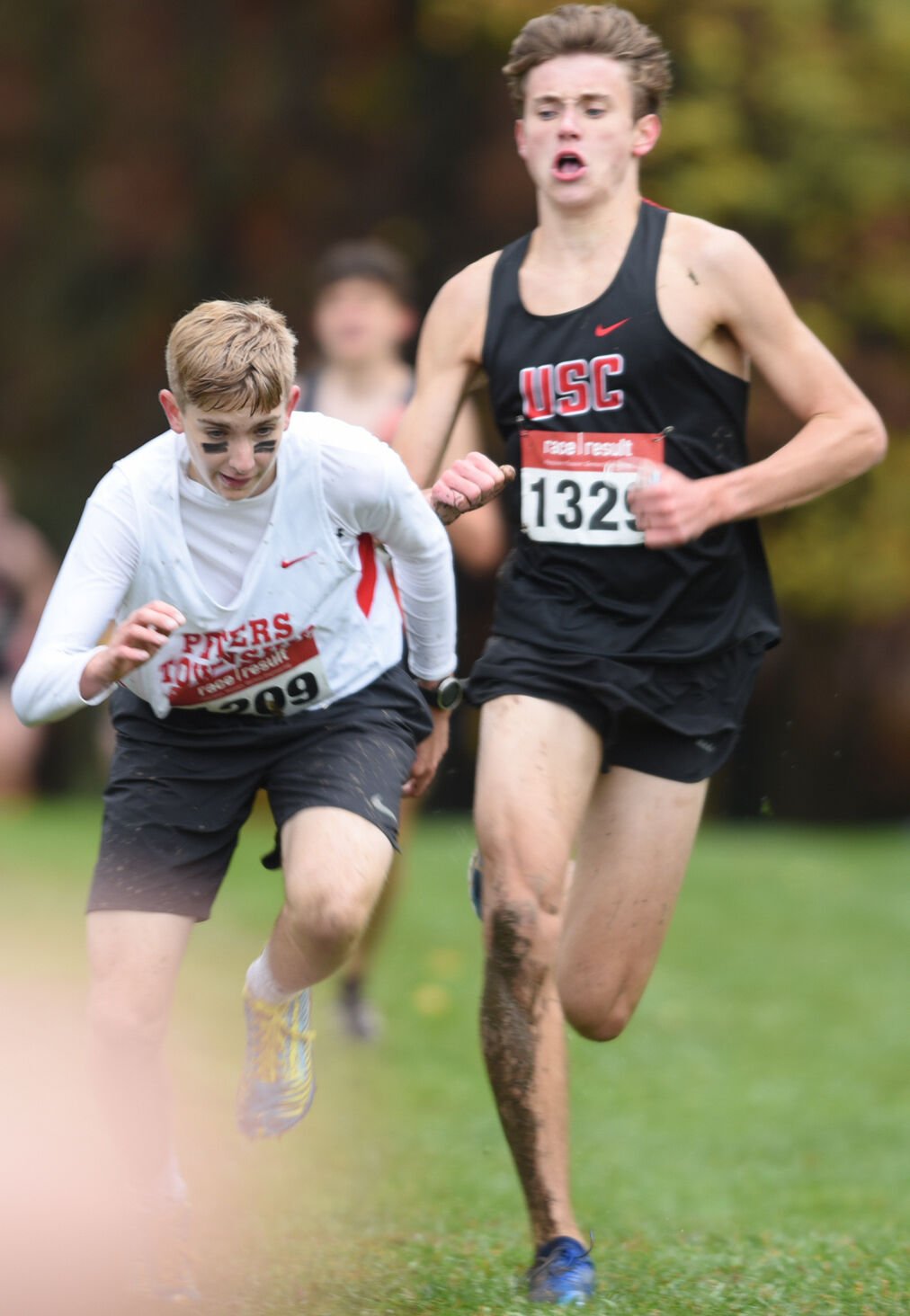 Aaron Skerbetz of South Fayette gets a conciliatory hug from his father after just missing out on a PIAA berth. The senior finished 43rd overall with a 17:25 time during the WPIAL Class AAA boys cross country championships.

Jake Borgesi placed 13th overall in 16:32 during the WPIAL Class AAA boys cross country championships and qualified for the PIAA meet to be held Nov. 7 in Hershey.

Each qualified for the PIAA Championships in Hershey.

Bloodied, battered and barely able to stay on his feet, Borgesi finished 13th overall. His time 16:32 was more than a minute behind champion C.J. Singleton of Butler, who finished with a time of 15:50.

Noting he did not fall during the race and he did not know how he skinned his shin, Borgesi admitted to “being spent” at the end of the race.

“I gave it my all. I had nothing left. I couldn’t feel anything,” he said. “Normally, I’m not feeling like this at the end. It wasn’t a great race.”

For Iagnemma, it was a textbook race. The junior positioned herself in the right pack and finished ninth overall. Her time was 19:04, more than a minute behind Mia Cochran of Moon. Despite a COVID-19 scare, the Moon junior competed after testing negative twice for the virus. She defended her title, posting a 17:46 time.

A little muddy but nonetheless fresh after her 5-kilometer run, Iagnemma said conditions were different than usual because of the soaking rains the past two days.

“So much mud,” she said with a wide smile. “It’s a bit of a challenge but I like it. It makes the run more interesting for sure and you really have to think on your feet.

“I definitely found the group that I needed to stay with and held on,” she added. “My plan was just to come out here and try to qualify for states. Do the best I could and I think I did that.”

Winans said she put herself in contention from the word go and it paid off because “Lauren’s a tough kid.”

“When you watch her run, she takes everything we talk about and puts it into practice; the advice, the constructive criticism,” he said. “She takes it all to heart and trusts that it’s going to work and pay off.”

Self-assurance pays dividends for Borgesi, particularly since he is a sophomore often jockeying with more seasoned runners.

“Jake is a great kid,” Winans said. “When he gets to the line, he thinks he’s the best runner out there no matter who is standing next to him. I admire that because it’s tough for some kids to be confident when you are up against such tough competition. But he absolutely believes and has that faith that he is a top quality runner and he’s been proving it race after race.”

Borgesi felt he had a top-10 finish in him but the slip at the end cost him a couple slots. He was nonetheless pleased he earned a PIAA berth

“As long as I qualified, I was happy with what I did. It feels good,” he said but noted he was not at his best.

“I hadn’t been sleeping well. I worried about this but when I got to the starting line I actually was really calm for some reason.”

He hopes to do better at states.

“I would like to medal,” he said, “but I would have to perform better than I did today.”

Winans could not argue with the performance of the Lions girls team. While they had won WPIAL titles at the Class AA level, they moved up to Class AAA this fall. South Fayette finished fifth in the team standings.

North Allegheny, like its male counterparts, won the title with a 67 score. Pine-Richland was the runner-up. Seneca Valley and Mt. Lebanon also finished ahead of the Lions.

“The girls did real well,” Winans said. “I’m not sure we could have expected a better performance from our kids. If somebody ended up beating us, it was because they ran really great races and that’s nothing negative about us.”

Because of COVID-19 restrictions, only the WPIAL championship team and the top 10 overall finishers advance to the PIAA Championships.

Singleton and Sage Vavro finished in first and second place for Butler, and NA placed four runners in the top 10 to win its third team title in a row. The Tigers have won 13 of the last 15 championships.

Barak Asher of Mt. Lebanon earned the only other PIAA berth in the boys competition. The senior finished 10th overall with a 16:29 time. He also helped the Blue Devils to a fourth-place showing in the team standings.