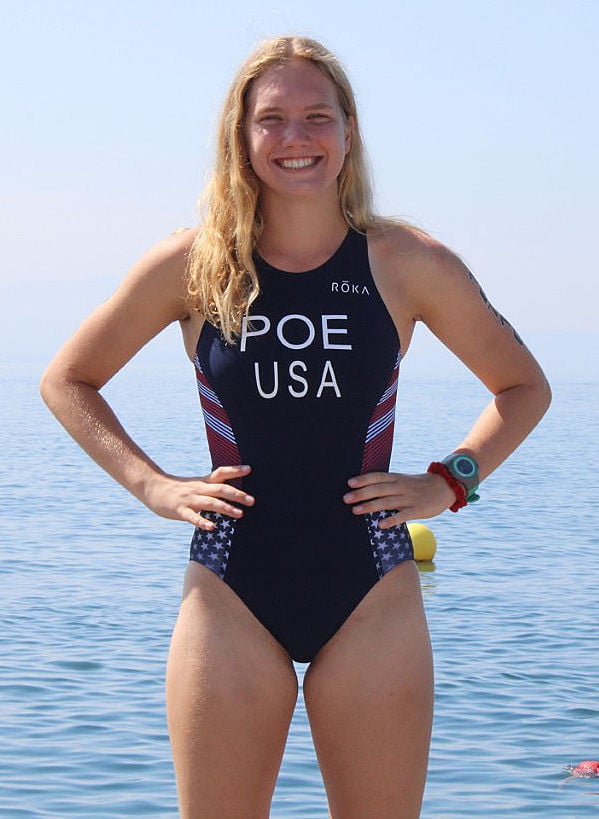 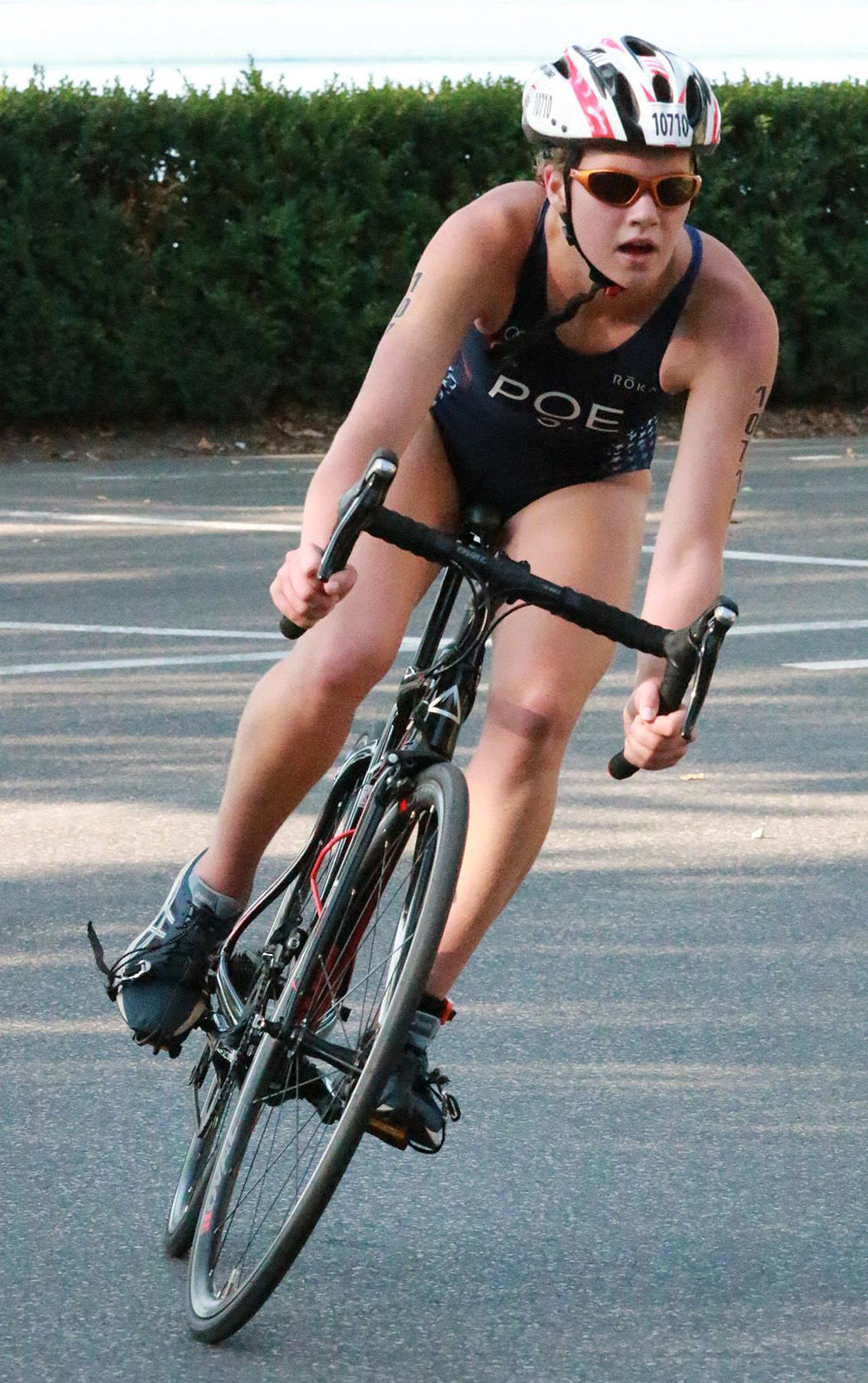 Hailey Poe turns a corner during the cycling portion of the triathlon. 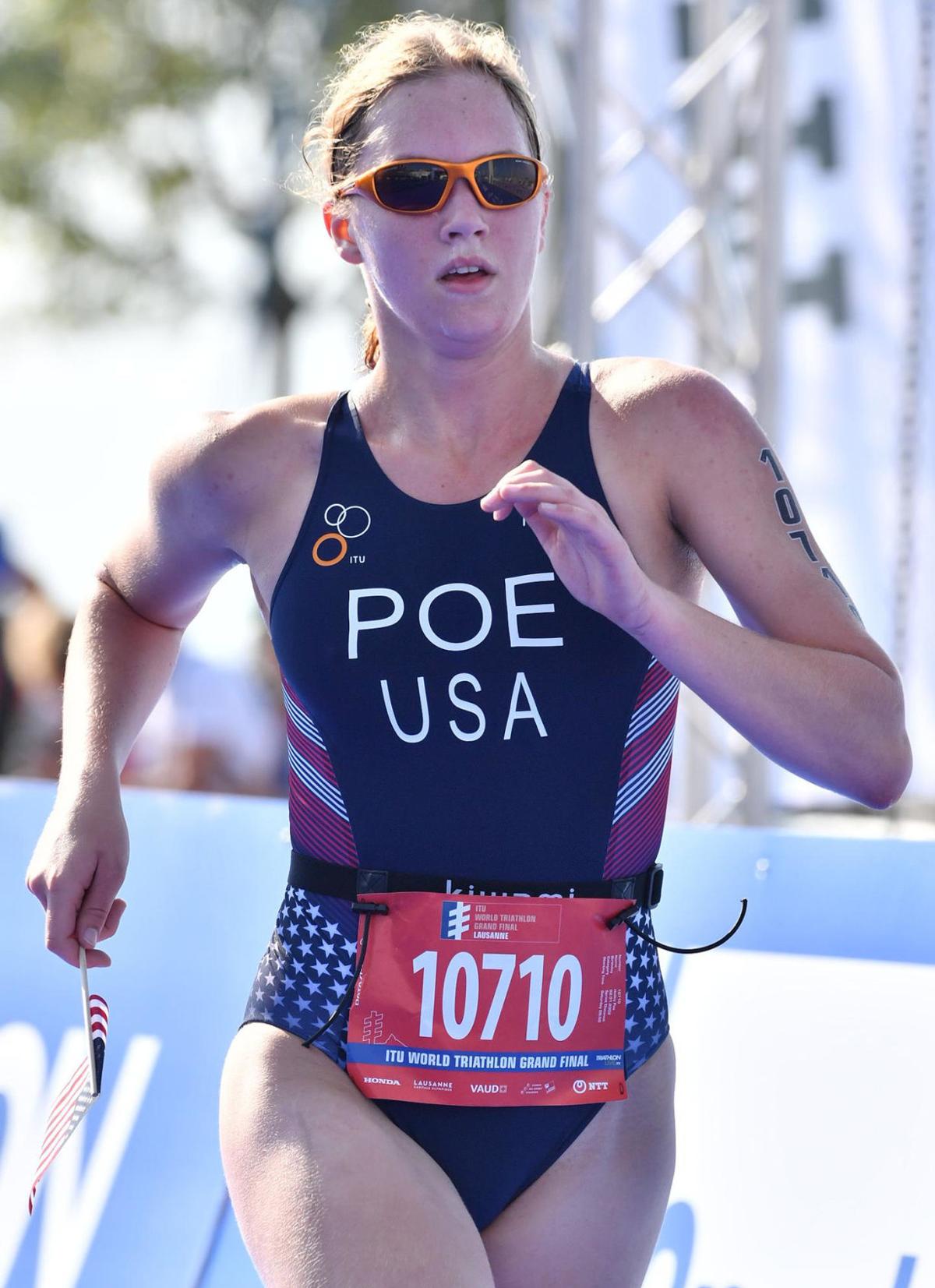 Hailey Poe during the run portion of the triathlon. 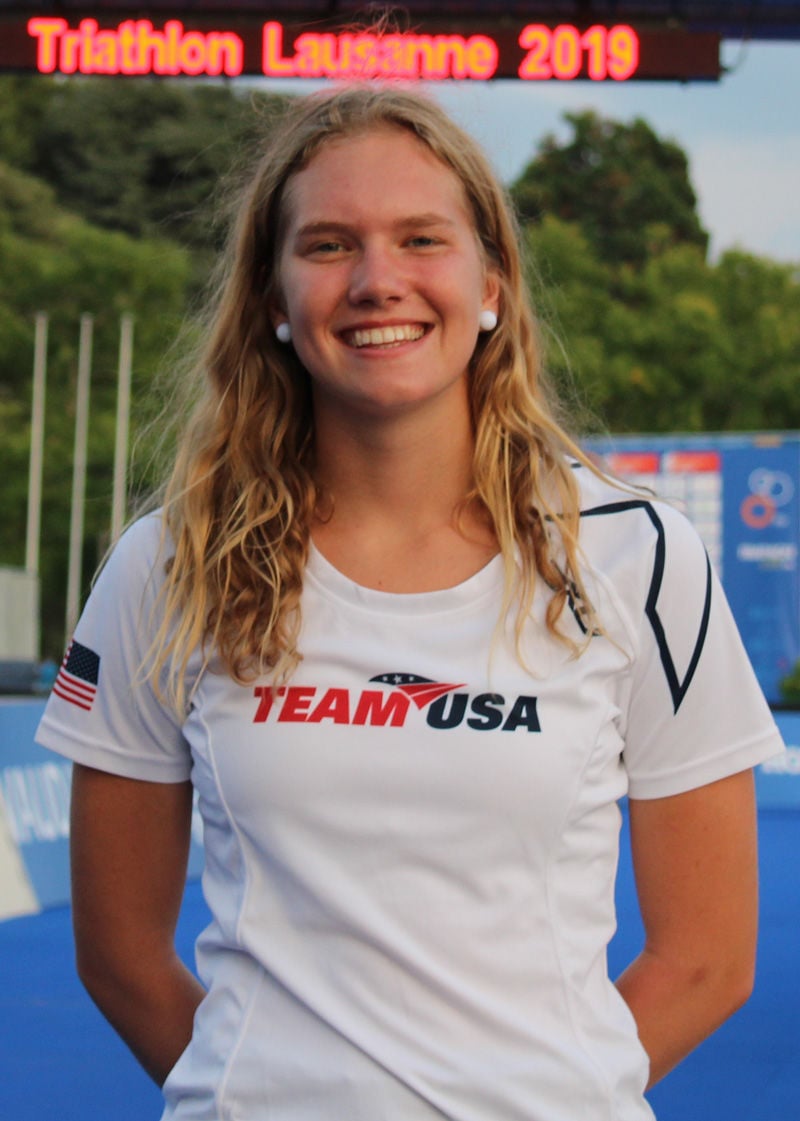 Hailey Poe turns a corner during the cycling portion of the triathlon.

Hailey Poe during the run portion of the triathlon.

Hailey Poe never desired to do the expected. Instead, the South Fayette High School senior opts for the extraordinary.

Instead of following exactly in her parents’ running footsteps, the 17-year-old daughter of Lori and Dave Poe has become a world-class triathlete.

In fact, she recently competed for Team USA at the International Triathlon Union Age Group Sprint World Championships in Lausanne, Switzerland. She placed 16th in the 16-19 female age group.

“I used to hate running as a child,” she said. “Since my parents were both runners, I didn’t want to do what everybody expected me to do.”

So Poe played soccer and occasionally entered road races in which her parents participated. She recalled the Brookline Breeze. Stressing her parents did not push her to enter, Poe acknowledged that one-mile fun run was not only her “fondest memory,” but it also was an eye-opener.

“I learned I’m super competitive,” she said. “As this little boy passed me, he said that he was going to beat this girl and I said, ‘oh no you’re not’ and I made sure that I beat him. After that, no, I still didn’t like running, but I loved competition. I think it’s just in my nature.”

And, at age 7, Poe discovered a natural outlet for her competitive instincts and entered her first triathlon, the Kids Triathlon at South Park. A novice in the water and astride her pink Barbie bike, she managed a top 10 performance.

“I think I got seven or eighth,” she said. “What I remember was my dad saying I wouldn’t like it. After I completed it, he asked me again and I said, ‘yeah, I loved it.’ It was so different from anything I had ever done before.”

“That’s my favorite part,” Poe said. “A triathlon is three different sports all contained in one event.

“It’s not the same thing over and over. If you are running, it’s just running. With swimming, you are practicing swimming over and over. Doing laps just gets boring. You are doing all this practice just to shave a fraction of time. After you do it so long, you get burned out. It’s nonstop, not doing anything else. With a triathlon, though, you change things up. You can shake up the training. It never gets boring.”

Poe said the international triathlon was different from others in which she participated because drafting was legal in the bike portion of the event and the swim was not confined to a swimming pool. Plus, the transition area, as well as the finish, was lined with a blue carpet.

“That was super cool to run on that,” she said. “I liked the swim, too, because the water was nice and cold.”

Poe hit a snag when three minutes before the race, her goggles snapped. After flagging down an official, she said she was able to “sprint over” to the transition zone to pick up a new pair.

“That shook me up,” she said, “especially at a World Championship. My start could have been better.”

Nevertheless, Poe clawed her way to the front of the pack and was one of the first out of the water.

“It’s a mass start,” she said, “so there definitely is a lot of kicking, pulling and scratching because you have to force your way into the swim. You can’t compete, if you don’t. If you don’t get out aggressive, then you will be in back of the pack. So you do your best to get out fast.”

Poe said she makes up the most time when transitioning from the bike to the run. Unlike other competitors, she cycles in cages and not special shoes, which enable a rider to clip in and out of the pedals quickly.

“Some people in the transition zones are super fast. Their googles are off and they are grabbing the bike. I’m not super fast, but by no means am I slow. I am super efficient, but transitioning takes a lot of practice because each triathlon is different. One of the biggest difference for me and others are the shoes. I wear my running shoes so I am able to keep with the others girls. For me, the seconds I made up on the bike, I would lose in the transition. So I definitely have one of the fastest transition from bike to run.”

Poe said she excelled in the cycling and running portions of the race because she likes competing on hills.

“I felt I gave it may all on the course,” she said. “Others thought it was super hard, but I felt like I was able to attack the hills and I was catching people. I enjoyed the run and bike course because it was hilly and I like that. It’s the strong aspect of my race. I am able to go up hills more efficiently and faster. Hills are a difference maker.”

The trip is sure to make a difference in Poe’s scholastic activities.

A three-sport athlete at South Fayette, she plans to play an integral role in leading the Lions to their first PIAA championship in cross country.

“It would be definitely hard to win a state individual championship because two of the best runners in the country are in our division,” Poe said. “They are running crazy times. Unless they have an off day, it’s going to be hard for anyone to crack the top 3, but top 10 is the best position.

“But the goal, really, is to help my teammates win a title,” she added. “We are looking toward the state championships. We expect a good showing.”

Poe also excels in swimming. She swims the fly in the event and hopes to help her medley relay team of Abby Duncan (back), Lexi Ray (breast) and Allie Whalen (free) qualify for states and break the school record.

In track and field, Poe hopes to help the 4x800-meter relay win a WPIAL title and medal at states. Were it not for a mishap on the baton exchange, Poe and her teammates Steffanie Kozak, Lauren Iagnemma and Emma Fleck would have achieved that goal this past spring. Individually, Poe also plans to qualify for the 3,200-meter run and perhaps the 1,600 as well.

Nothing, said her coach Jeff Winans, is beyond Poe’s reach.

“Hailey is one of those tremendous leaders,” he said. “She is probably one of the best all-around student athletes that I have had the pleasure of coaching. She’s fantastic — very focused, very driven, incredibly supportive, brings everybody together as a team. (She is) instrumental in our team’s success.

“She’s a top-notch triathlete,” he added. “She has had a great deal of success in her age group. A lot of that success is translated into other areas. We see that in cross country and track.”

Poe has drawn interest from Duquesne, Washington & Jefferson, Rochester and the College of Charleston in South Carolina to compete at the NCAA level. She maintains a 4.1 GPA and plays the clarinet in the Wind Ensemble.

Poe also has scholarship offers to North Central College in Illinois and Daemen College in New York. Both have women’s NCAA triathlon teams. Poe, who is the president of the Student Government Association and is a member of National Honor Society, plans to major in history or leadership.

“I would not be upset to run in college, but my No. 1 goal is to do triathlons. It’s my favorite sport,” Poe said.

Having had her first taste of international competition, Poe would welcome an opportunity to represent her country at an Olympiad.

“That would be super cool. I would enjoy doing that,” she said.

Poe said during the Summer Olympics in 2020 in Tokyo the games will feature a mixed-relay triathlon. Though she has never competed in that event, Poe said she would embrace the competition.

“Honestly, I would love to compete in that because I love the team dynamic of sports,” she said.

That aspect of the Switzerland triathlon, Poe said, proved the biggest highlight in her experience abroad.

“The universal team USA atmosphere was amazing,” she said. “We were all super close. People I didn’t know, knew you because you were wearing a Team USA shirt. I heard my name or go USA and get pumped. Everybody was so supportive, even other countries. They all cheered for everybody else. That was the highlight of the trip.”

Realizing running is now an integral part of her life is another highlight Poe cannot deny.

“I like swimming a lot, but I like cross country better,” she said. “I’m really just discovering my potential.”

College: Undecided but has offers from North Central College in Illinois and Daemen College in New York, which have triathlon teams as well as W&J, Duquesne, College of Charleston, S.C. and University of Rochester for cross country and track.

Career choice: Undecided. "I love the aspect of helping people but not in a medical way. I'm keeping an open mind except I am not interested in anything to do with hospitals, doctors or the medical field."

Food: Bread. "I love all types. At our team pasta parties, I always go for the bread."

Most influential person? South Fayette cross country coach Joe Winans. "He riminds me of me. He brings his kids in a stroller to practice and my mom used to do that with me. He's awesome and his kids are wonderful."

Dream Destination: Disney World. "I've been there three times and I love going back there. But if it had to be a new place then somewhere in New England like Maine, Vermont or New Hampshire. It's nice and cold in winter there and then maybe I could go cross-country skiing. Our bike shop,has rentals for it but there never is any good snow here to do it"

Person you would like to have dinner with? "This night sound silly but the fictional character Hannah Montanna. I loved her. As for a real person, it would have to be Sally Grabowski. She's my grandma and I love her a lot."

People might be surprised to know this about you? "While a lot of people close to me know this, I am into historic preservation. I love anthropology and archaeology."