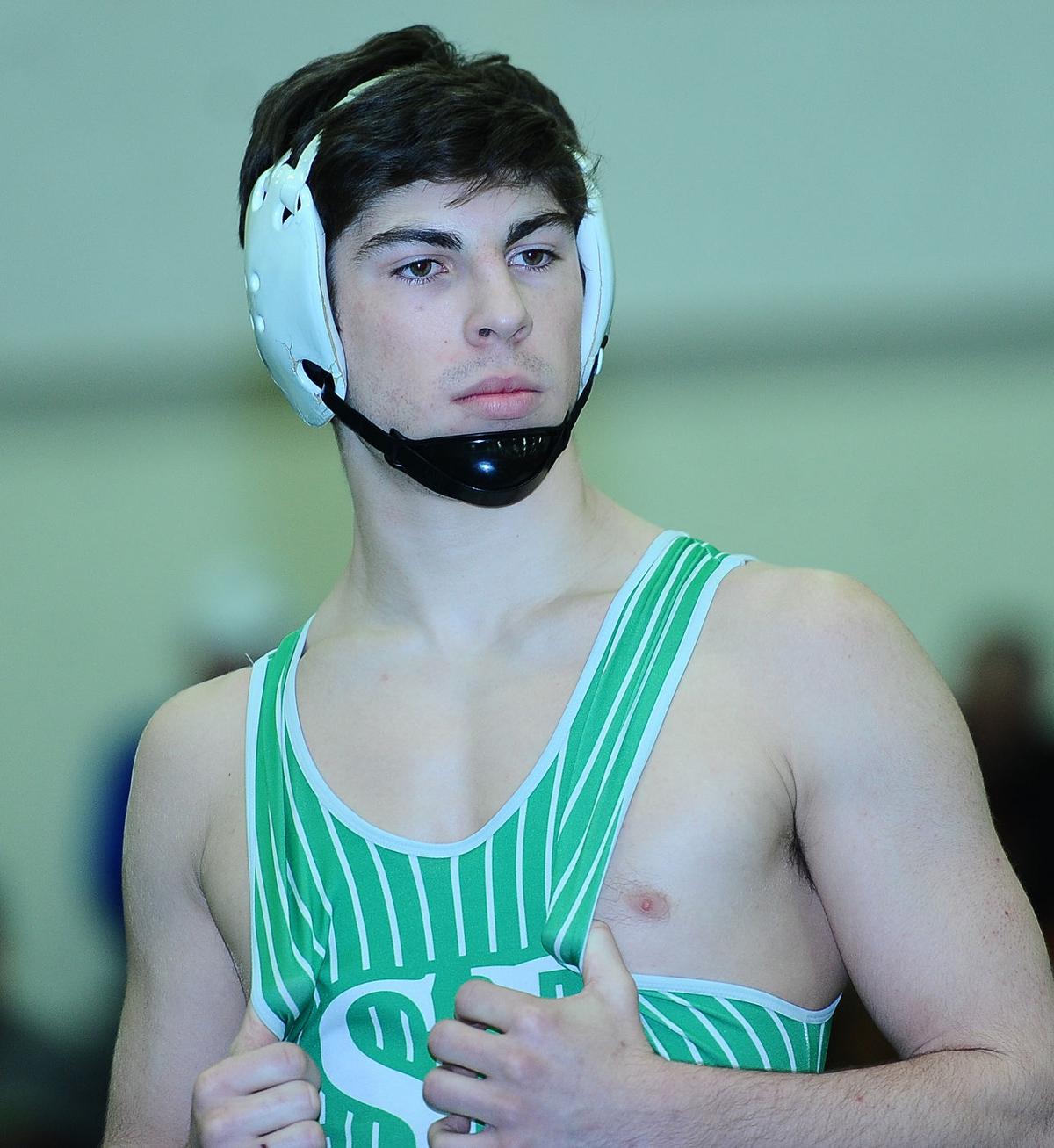 Eli Brinsky entered the Century Club when the South Fayette senior defeated (fill in the wrestler) for his 100th career victory during the semifinals of the TRICADA Tournament. 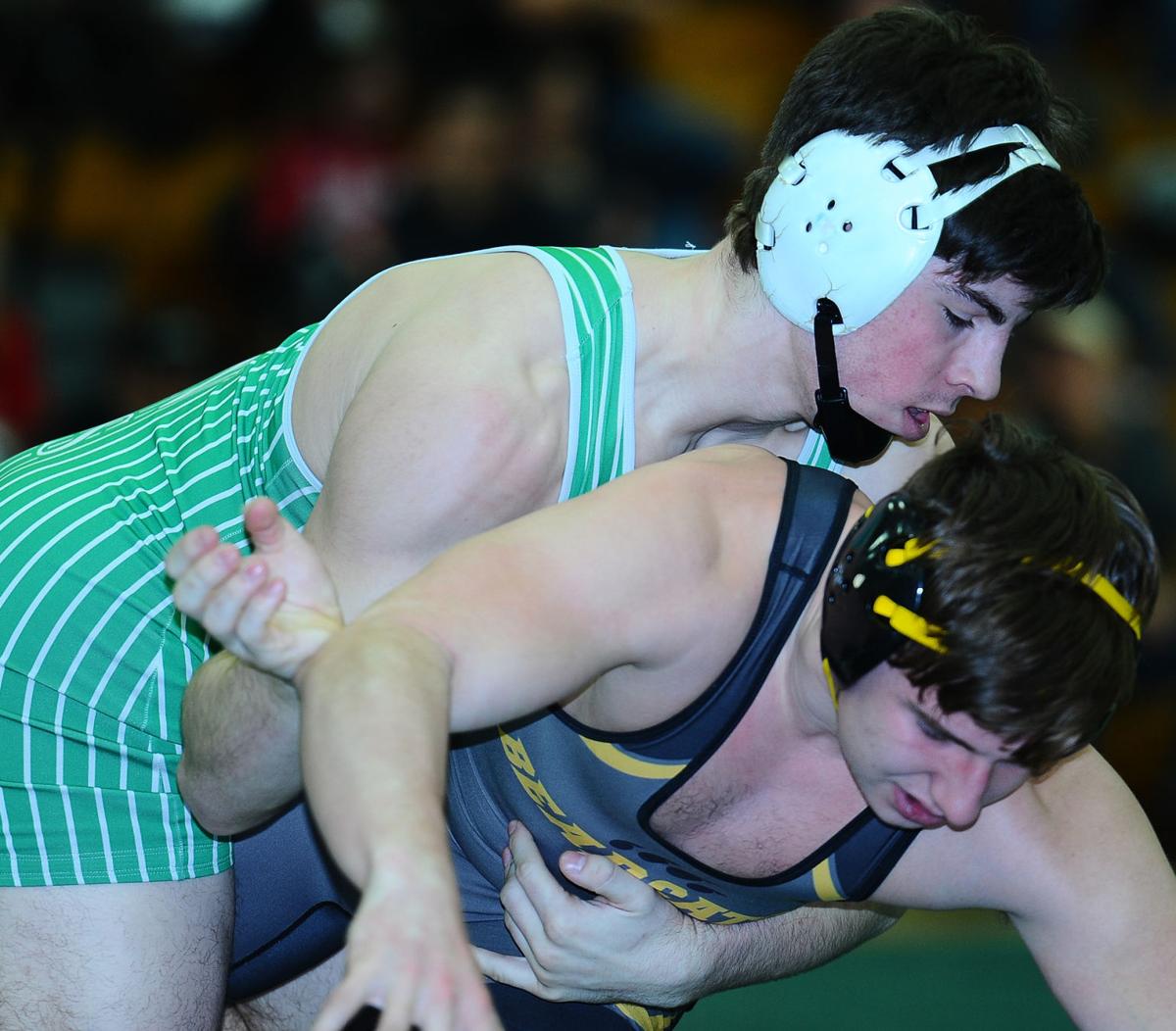 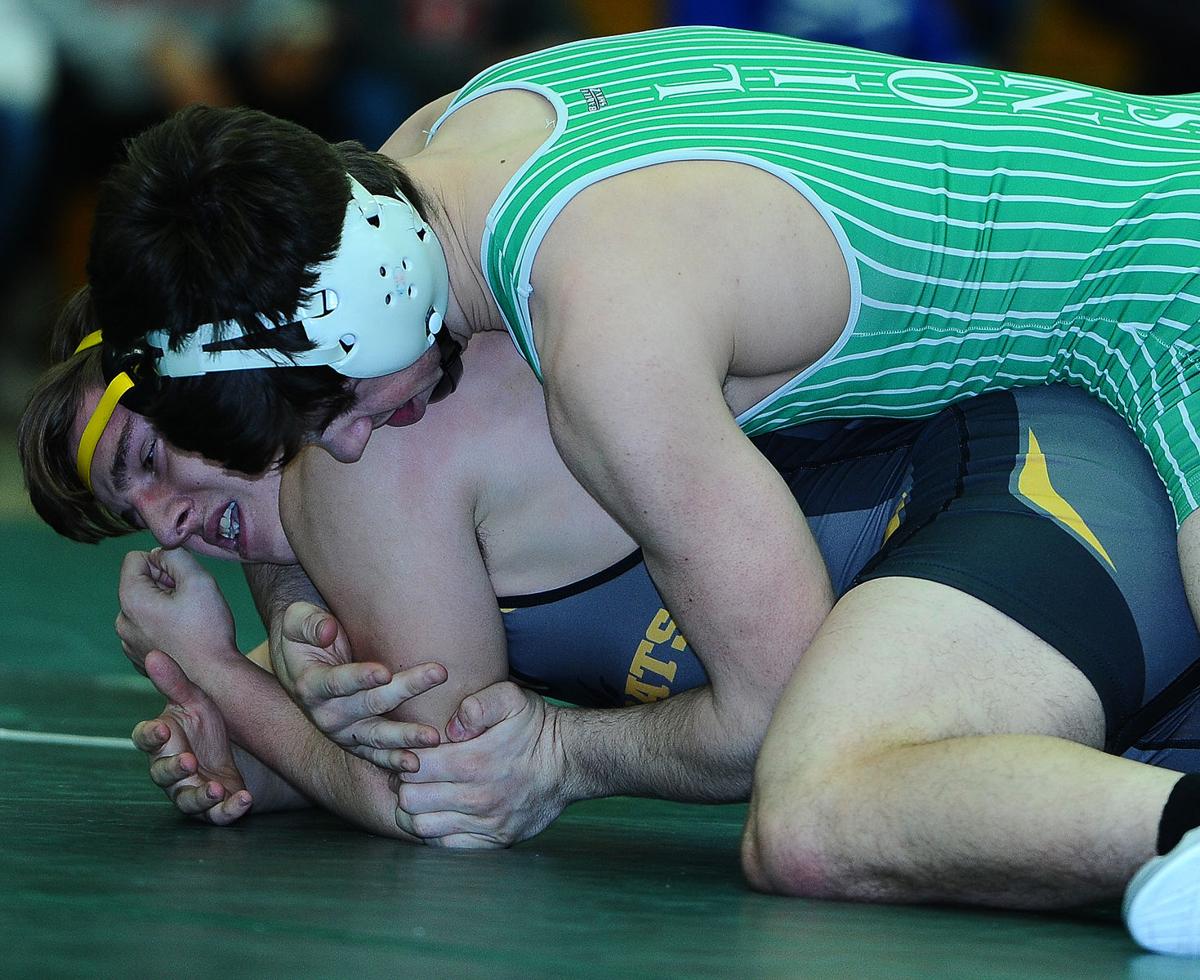 Eli Brinsky puts a hold on Owen Petrisek of Bentworth that he is unable to escape from as the South Fayette grappler picked up a pin on his way to winning the 170-pound weight class at the TRICADA tournament.

Eli Brinsky entered the Century Club when the South Fayette senior defeated (fill in the wrestler) for his 100th career victory during the semifinals of the TRICADA Tournament.

Eli Brinsky puts a hold on Owen Petrisek of Bentworth that he is unable to escape from as the South Fayette grappler picked up a pin on his way to winning the 170-pound weight class at the TRICADA tournament.

“The goal is to pin someone,” he said of the sport, “so you might as well look for it.”

The South Fayette senior found the fall twice on his way to capturing a championship in the 15th annual Tri-County Athletic Directors’ Association Wrestling Tournament. He posted two pins and picked up his 100th and 101st career wins in clinching the 170-pound weight class.

“I always look for the fall when I can get it,” Brinsky explained. “(A pin) is more a dominance factor and a bigger way to win but personally, I love overtime matches and I like to win that way. But, I was happy with that and how I performed. For me, it’s more about the performance than the result.”

From start to finish, Brinsky’s performance, indeed, was dominant.

After he pinned Eli Makel from Waynesburg in 80 seconds in his opening match, he decisioned Matthew Furman from Canon-McMillan, 5-1, for his milestone win. Brinsky then dropped Owen Petrisek from Bentworth in 1:25 to win the crown.

“Basically, my strategy was to stick to my stuff because, although they were all quality opponents, I hadn’t wrestled any of them before. I tried to get the first takedown and it got quick after that. It’s a pressure thing. If I keep the pace high, then things open up.”

Brinsky opened up tournament action, knowing he was two wins from entering the Century Club. He did not, however, focus on recording his 100th victory.

“I just wanted to wrestle clean and crisp. Just focus on technique,” said Brinsky, who acknowledged he got a little away from the strategy in the semifinal match against Furman.

“Overall, I executed well, but I didn’t control the match as well as I would have liked.” He added getting the 100th win was “a relief” and “another step” in the process. “I have a lot more to achieve. It’s just one goal along the path.”

“It’s a milestone that (Eli’s) worked hard to achieve,” Chaussard said. “We’re really proud of him but he has bigger goals.”

He added it was nice to see Brinsky accomplish the feat in his home gym.

Chaussard said the expectations for Brinsky are to contend for a state individual wrestling title. Brinsky knows it’s a tough road as among the top competitors in his weight class are Mac Stout. The Mt. Lebanon sophomore was a placewinner at the prestigious Powerade Tournament over the holiday break. Again Brinsky assumes a practical attitude to wrestle-offs.

“I really try not to look at rankings. The WPIAL is tough and I assume all (my opponents) are tough but I don’t put anybody on a pedestal. I just focus on who is in front of me.”

Brinsky added that everybody’s objective is to “be on top of the podium” at states but he is looking to first “finish as high as he can” in the district. The top four finishers in the WPIAL/Southwest Regional to be held Feb. 28-29 at Canon-McMillan High School advance to the PIAA championships set for March 5-7 at the Giant Center in Hershey.

Brinsky also said that winning the TRICADA title is a “stepping stone” for the rest of the season. And, he intends on continuing doing what earned him a championship. He plans to keep working hard in the practice room and lifting. In addition to his school routine, Brinsky often lifts at home with his father, Paul, who was a standout safety at Carnegie Mellon University.

The home gym, Brinsky says, “has everything I need.”

Chaussard noted that extra effort defines Brinsky and makes him a role model for the rest of the team.

“Eli’s a great leader in the room and an example to all on the team of what with hard work you can achieve your goals,” Chaussard said. “His work ethic, his willingness to learn and commitment to getting better in the weight room and on the wrestling mat are unparalleled.”

Brinsky wasn’t always committed to wrestling. At one time, he also played football and baseball.

Ironically, it is his brother, Jack, that is the football player today for the Lions. Though his sibling started wrestling first, Brinsky has 10 seasons under his belt.

“Jack signed up and when my dad took him to practice, I decided I didn’t want to sit around and watch him practice so I started to wrestle, too. Jack’s priority is football and he wrestles now to get in shape for football. He’s naturally a good athlete. But I love wrestling best,” Brinsky said.

Brinsky enjoys wrestling well enough that he will participate in the sport in college. Currently, he is receiving interest from Seton Hill, Washington & Jefferson College, Marshall, West Liberty and Clarion.

“I want to continue to wrestle and I am looking at good schools that are the best fit for me and my career goals,” he said.

Brinsky plans to major in health sciences. He plans to become a physician’s assistant. Part of his interest in medicine is due to his mother, Tanya, a breast cancer survivor.

Brinsky is also involved in volunteer and fundraising activities such as Pin Cancer. The non-profit organization gives wrestlers an avenue to inspire awareness and raise funds for cancer research. This past Wednesday, South Fayette sponsored such an event against West Allegheny. Donors could commit a one-time amount or donate per pin. Additionally, wrestlers wore different designed singlets for the match

“(Cancer) changes you a lot. It’s something I got involved in because of my mom. She’s healthy now and doing great but this and planning a career in medicine are ways that I can also help others,” he said.

Brinsky’s performance wasn’t the only effort that helped the Lions secured a seventh-place showing as a team in the TriCADA Tournament.

The Lions put five other wrestlers on the podium in the TRICADA tournament.

Quentin Franklin earned runner-up honors at 285. The tournament was the senior’s first live action since recovering from a football injury.

“Even though he suffered a tough loss in the finals,” Chaussard said, “I thought he wrestled well. But we also know and found out that he has a lot of time to make up. And he will work hard to do that.”

According to Chaussard, Carpenter’s showing was an improvement from last year. “He wrestled well throughout the tournament,” Chaussard said. He added that after a tough loss in the semifinals, Anderson wrestled back “very well.”

In general, Chaussard was satisfied with his team’s performance.

“I was very pleased with the outcome of the tournament even though I thought we left some wins on the mat and could’ve placed a little higher team wise,” he said.

Book: How To Win Friends and Influence People by Dale Carnegie

Diet: “I don’t usually have to cut weight so I can eat as much as a I want. But no candy or junk food. I eat a lot of lean meat to build muscle and healthy foods.”

Favorite athlete: Jordan Burroughs. “He’s a common one for wrestlers but a role model for me because of the way he shoots and uses the double legs like I do.”

People might be surprised to know this about me? “I don’t really socialize that much. I’m friends with my teammates and I’m real close to my parents.”

Dream destination: Nowhere really. “I’m a homebody. I have always been a simple person.”

Person you would like to have dinner with: Dan Gable. “He was amazing at wrestling and he’s a great coach and an interesting person.”

Best thing about wrestling. “Oh my. There are so many. It’s what you get out of it. Everything is all controlled by you. Your success is how much you put into it. The extra work and all that stuff comes back to you. In the practice room and on the mat, it’s all you. You have to rely upon yourself.”

Life lesson wrestling has taught you: “Discipline with a doubt. It’s not just with eating or your training regiment. You can’t procrastinate and leave things undone. You only have a certain amount of time to get things done so you don’t have time to put things off.”