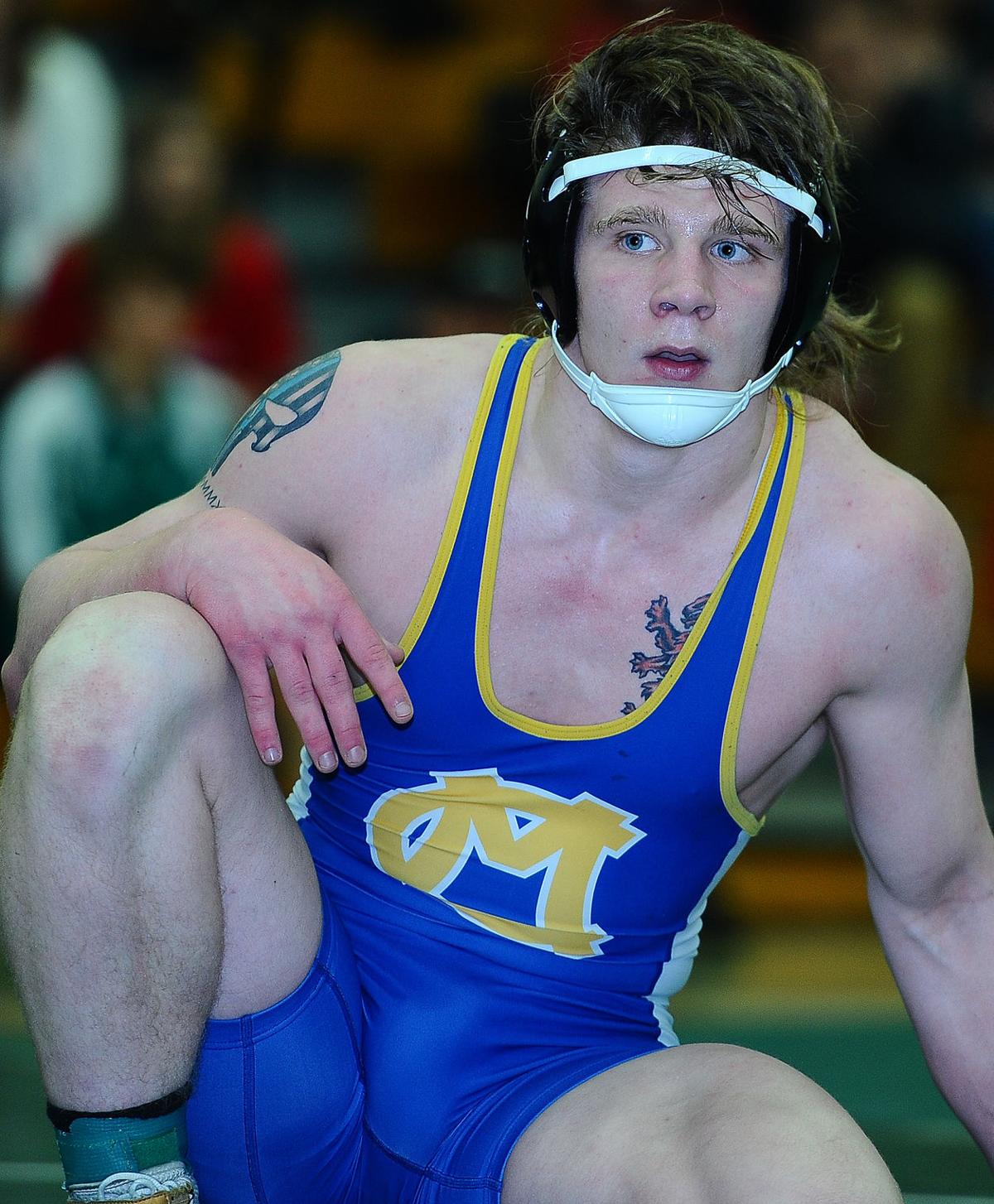 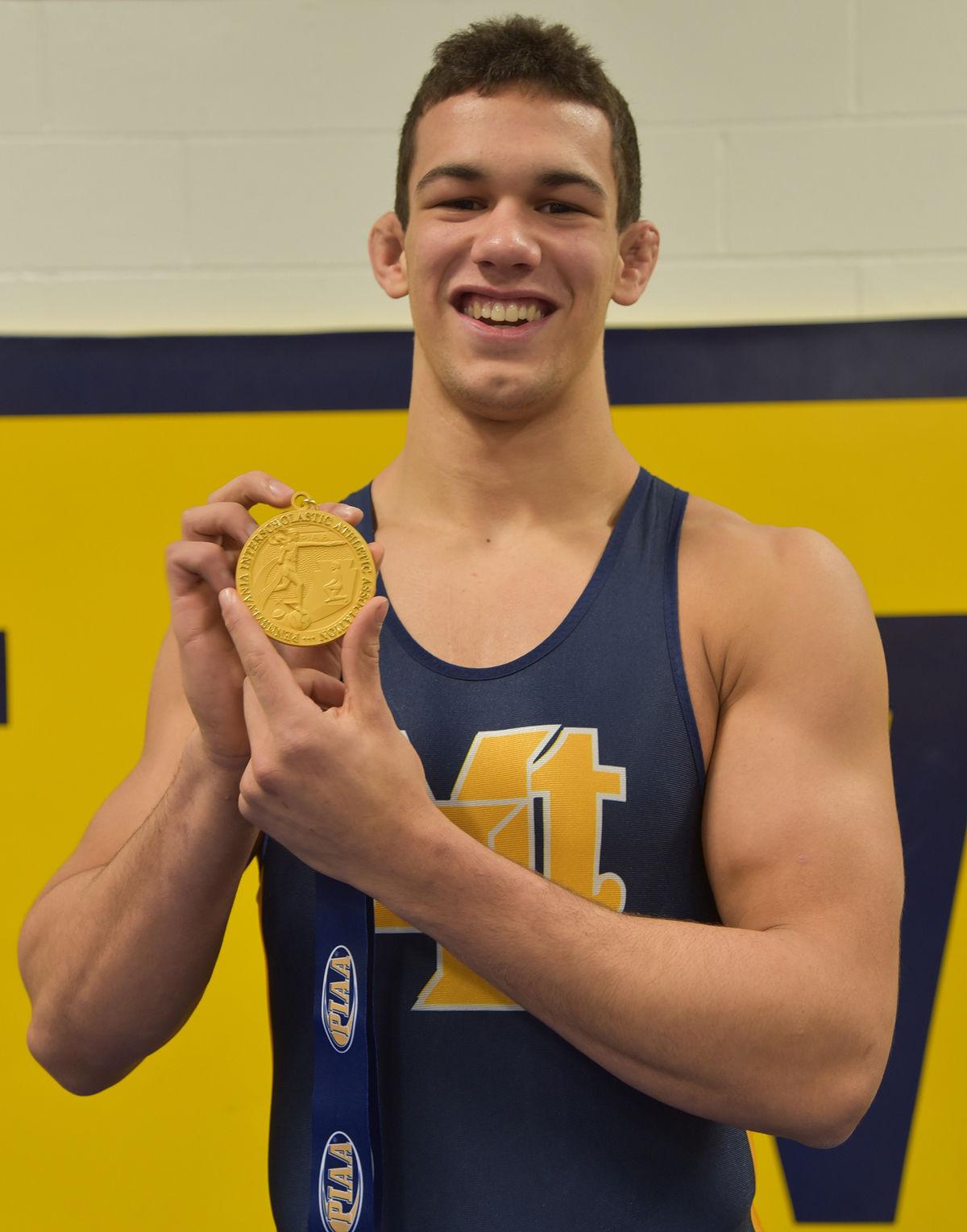 Luke Stout shows off the gold medal he captured at the PIAA wrestling championships. The Mt. Lebanon senior capped his scholastic career by defeating Luke Montgomery of Bethel Park, 12-1, in the 195-pound final.

Luke Stout shows off the gold medal he captured at the PIAA wrestling championships. The Mt. Lebanon senior capped his scholastic career by defeating Luke Montgomery of Bethel Park, 12-1, in the 195-pound final.

Canon-McMillan’s Gerrit Nijenhuis and Mt. Lebanon’s Luke Stout had only one thing on their minds this wrestling season.

“I was only thinking about becoming a two-time state champion,” said Nijenhuis.

Stout joined Nijenhuis in his desire to be atop the podium in Hershey.

“It’s the one thing I’ve worked toward all my career. A state title was my dream all these years,” he said.

On March 7, both wrestlers grabbed that brass ring. In doing so, they cemented their names in scholastic wrestling history.

When Nijenhuis defeated Donovan McMillon of Peters Township, 6-0, in the 182-pound title bout in the PIAA Class AAA Wresting Championship at the Giant Center, he polished off a 47-0 campaign and a 181-16 career.

“It feels amazing.” Nijenhuis said. “I just go out and wrestle the same way.”

With the same result.

With his victory in the PIAA finals, Nijenhuis also broke the record for most wins in WPIAL history. He broke the record of 180 victories shared by Dane Johnson and Geoff Alexander, both from Central Catholic.

“My career definitely had some ups and downs,” Nijenhuis said, “but I definitely wouldn’t change a thing about it.”

Stout, too has had his share of ups and downs. His lowest point occurred last year when he lost in the state finals. The defeat propelled him.

Since the loss, Stout said he was “relentless” in his training.

“In wrestling, you have to consistently work hard and not cut corners,” he said. “You have to be constantly disciplined. The sport forces you to do the right things always. When you do, then you’ll succeed in whatever it is you do.”

When Stout scored a major decision against Luke Montgomery from Bethel Park in the 195-pound state finals, he also succeeded in completing an undefeated season. Stout finished 42-0 overall. He owns a 153-16 career record.

Stout has the most wins in Mt. Lebanon history. He’s also the second member of his family to win a state title. His brother, Kellen, won a PIAA crown in 2015. His younger brother, Mac, will have to wait until next year as he was a state runner-up this season.

“My family has been very instrumental in my success. My parents have always supported me,” said Stout. “My father and my brothers pushed me. They have helped me progress.”

Both Stout and Nijenhuis progressed through the season with one big triumph after the other leading up to their state titles. Both were Powerade Champions to start the 2020 campaign.

Nijenhuis also won the King of the Mountain and the Tri-County Athletic Directors Association tournaments. He was also a section and WPIAL champion.

Stout won the Eastern Area Tournament in addition to being crowned a section and WPIAL champion. He was named Outstanding Wrestler after pinning his way to a title in the Allegheny County championships.

Before they matriculate to their respective universities to continue their wrestling careers, Nijenhuis, a Purdue recruit, and Stout, a Princeton recruit, added one last feather in their caps. Both share Almanac tops all-star honors as Wrestlers Of The Year.