Abby Liebert leads the way while safely distancing during a circle swim lap of the breaststroke. 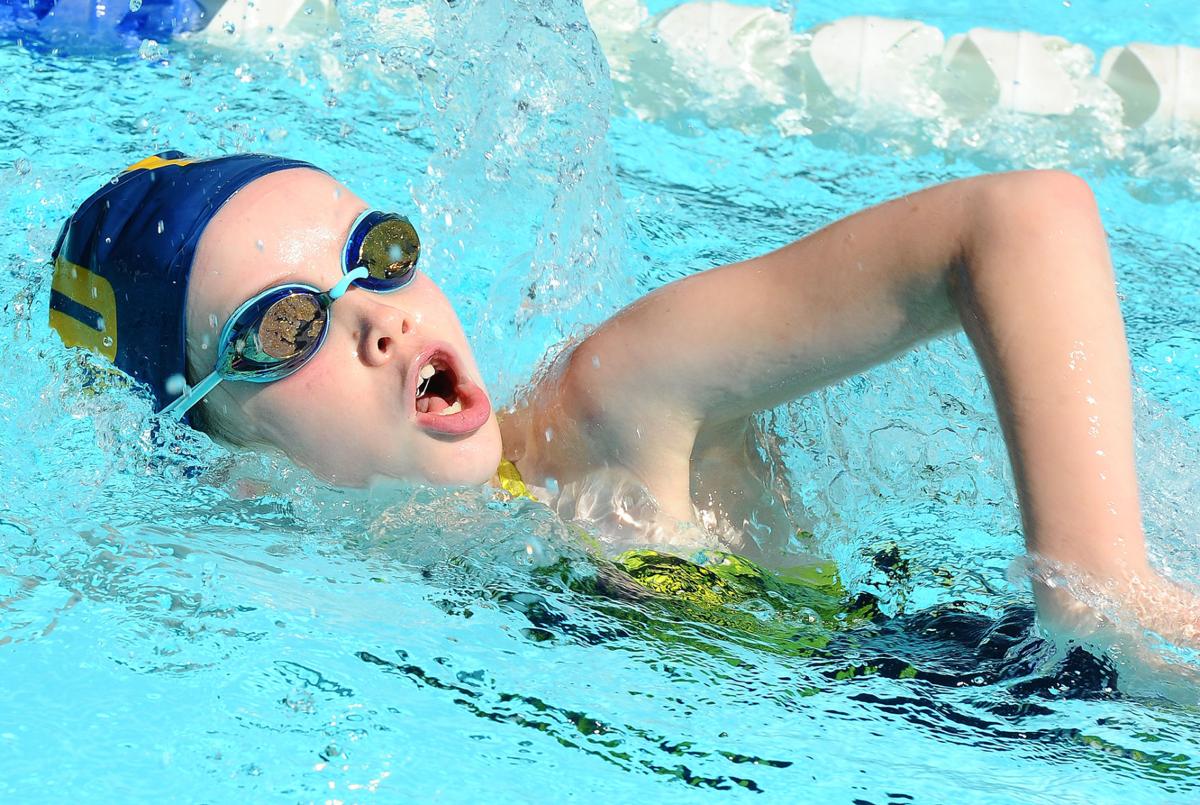 Paige Fronczek takes in some air while doing the freestyle during a MLAC workout. 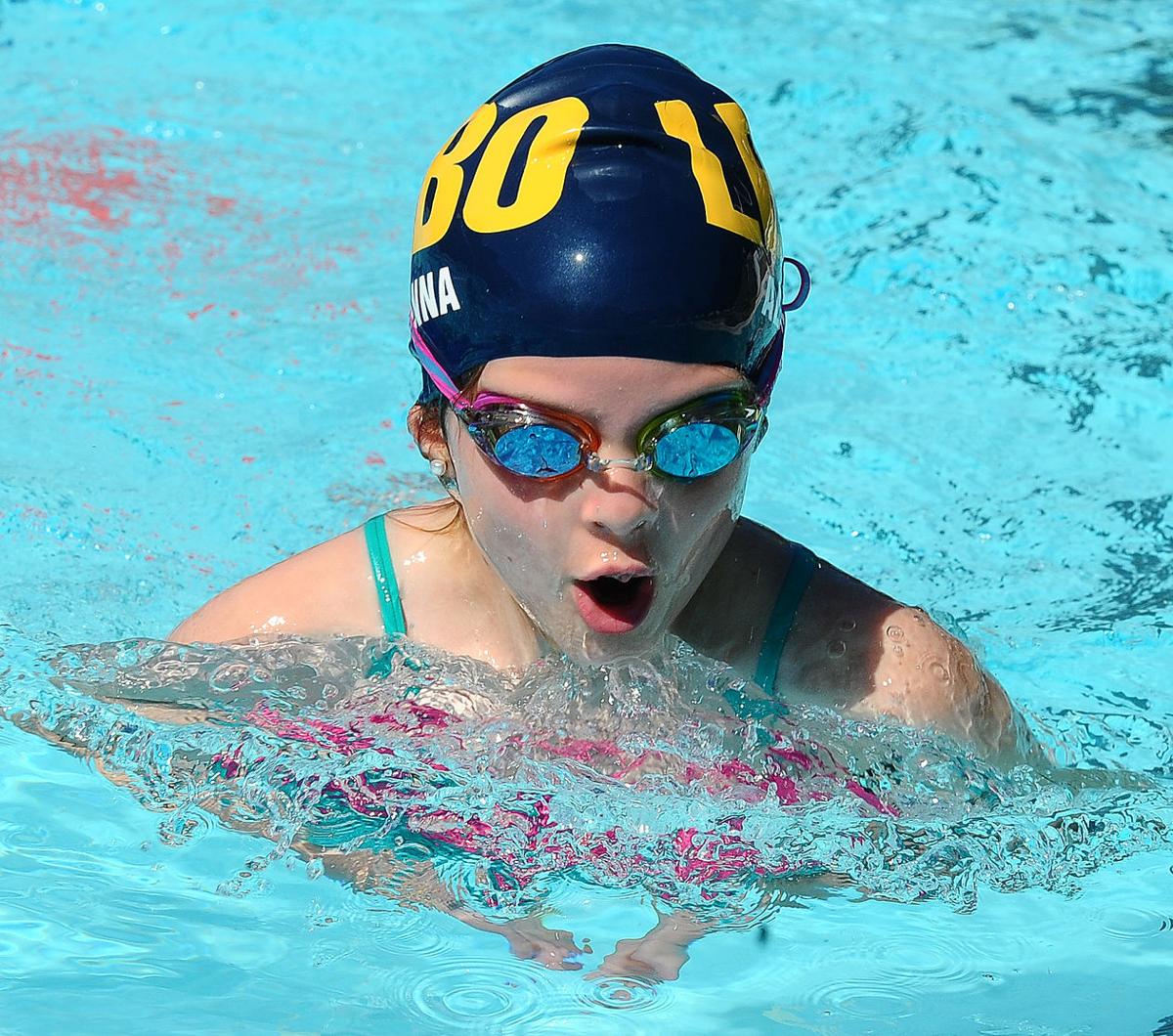 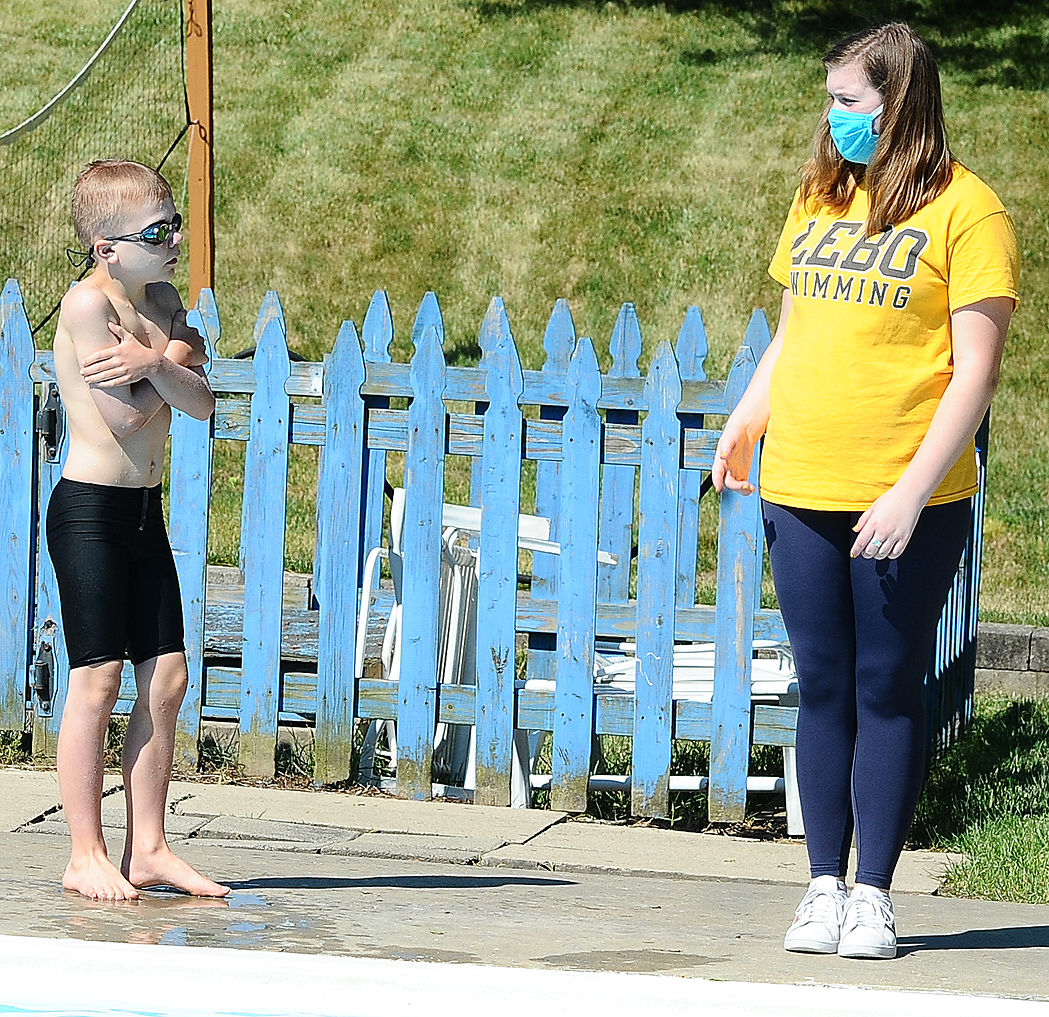 Harry Miller receives instruction before working on his breaststroke. 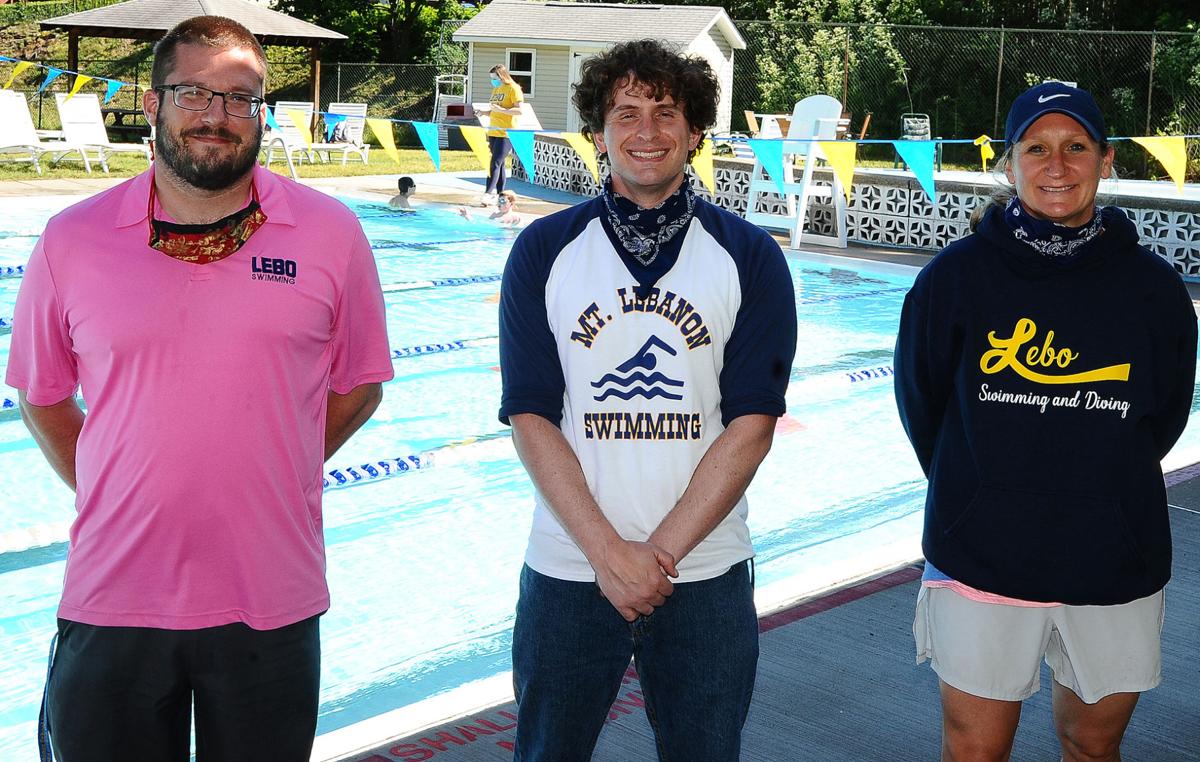 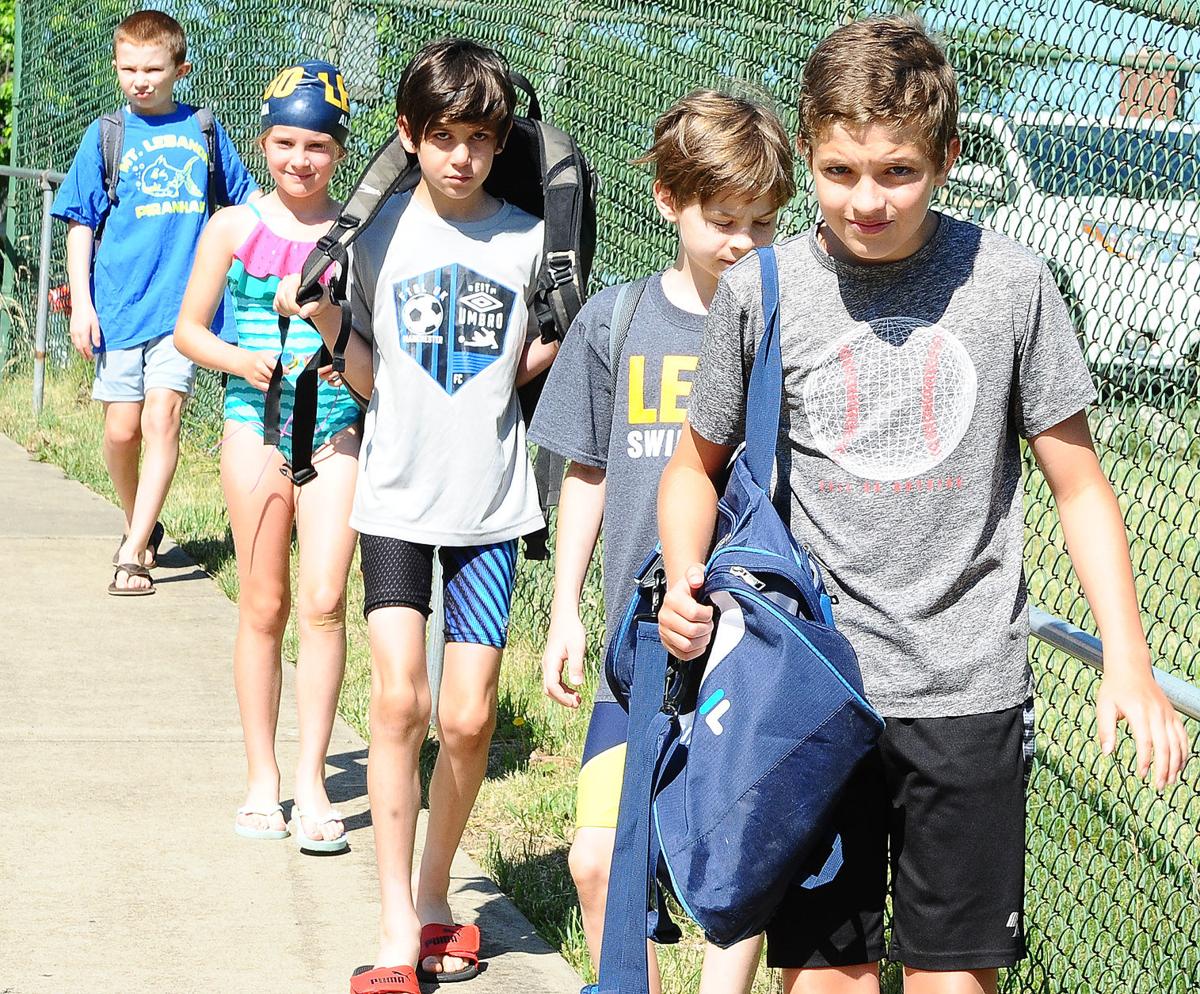 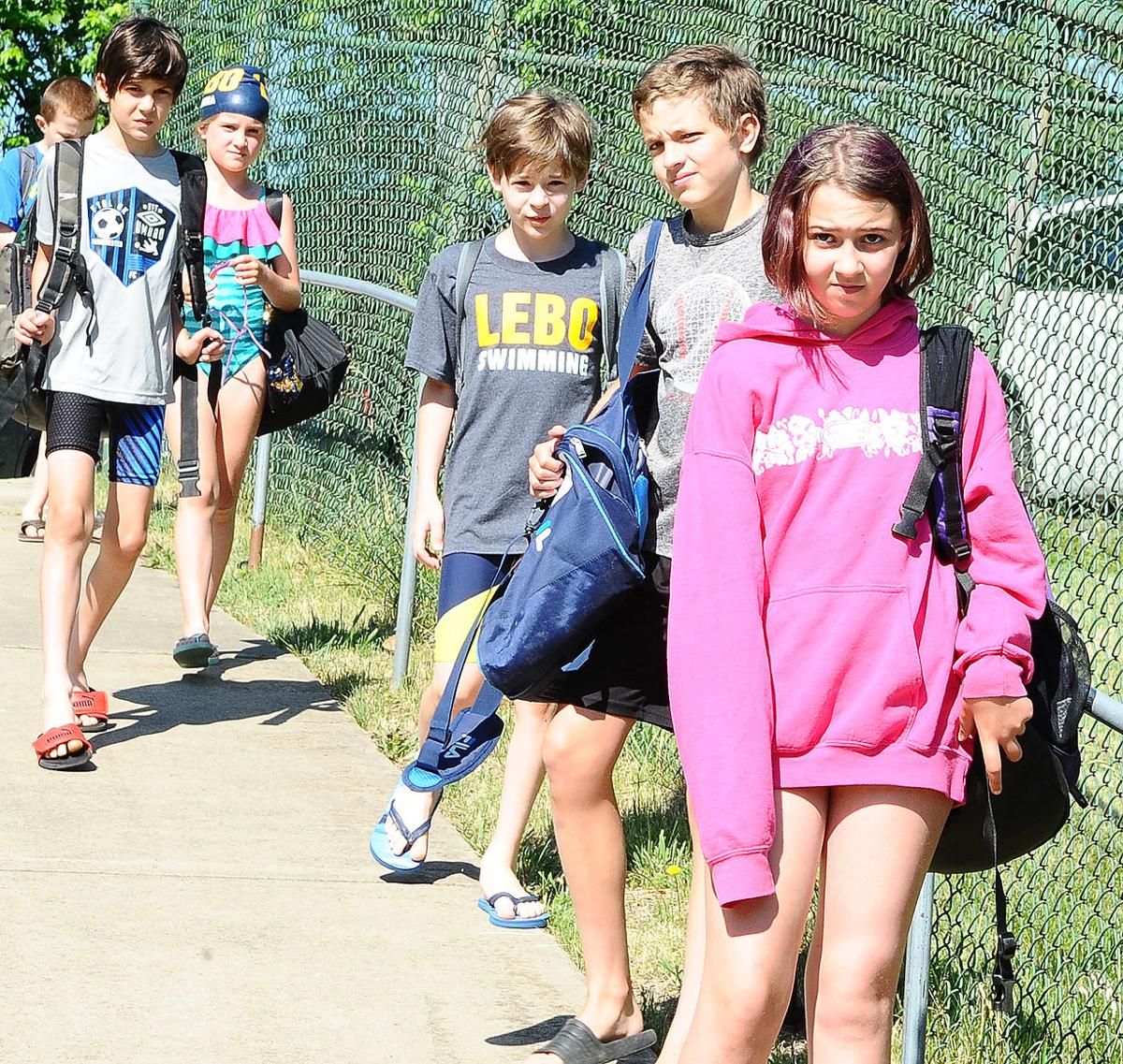 Sophia Chiappetta waits to be checked in before entering Bower Hill swimming pool for her morning workout with Mt. Lebanon Aqua Club.

Abby Liebert leads the way while safely distancing during a circle swim lap of the breaststroke.

Paige Fronczek takes in some air while doing the freestyle during a MLAC workout.

Harry Miller receives instruction before working on his breaststroke.

Sophia Chiappetta waits to be checked in before entering Bower Hill swimming pool for her morning workout with Mt. Lebanon Aqua Club.

Adam Ryan remembers swimming as a youth in Bethel Park in the mid-1990s. He went on to excel for Bethel Park High School’s swimming team as well as at Clarion University of Pennsylvania.

Even now as a coach, he can relate to the struggles facing the members of Mt. Lebanon Aqua Club. Most of the organization’s swimmers are adjusting to being back in the water. They have experienced a near-four month hiatus from workouts because of the coronavirus pandemic.

“This is a brutal sport,” Ryan said of swimming. “You learn a lot about yourself because when you are swimming, it’s just you and your head.”

“I try to put myself in their shoes,” he said. “If this were to happen when I was in school, sure I’d hop in the pool and that would be great. It’s an escape. It’s something comforting. It’s just nice. You get that energy out and feel good.”

Workouts have resumed for Mt. Lebanon Aqua Club members this summer at the Bower Hill Swim Club. Even though there are no competitions lined up, swimmers are back in the water, doing laps and sharpening their skills.

“These kids have been through so much at a drop of a dime,” Ryan said. “So to even have some sort of normalcy – just coming to practice even if we are not competing – is real important. These kids love swimming. Just to have the feel of the water for 75 minutes and to escape all the craziness outside and get your mind where it needs to be is invaluable, especially for one’s mental well-being.”

In the hours between 6 and 11 a.m., before the Bower Hills Swim Club opens for general swim, Sharks, Marlins, Barracudas, Dolphins and Stingrays line up in an orderly fashion to enter the pool area for practice. Class sizes vary from 24 to a maximum of 30 and swimmers all maintain physical distances of six feet or more while practicing. Cones are positioned at the bottom of the pool in each lane to insure boundaries are maintained and swimmers do not mingle.

According to general manager Michael Kristufek, USA Swimming and American Swim Coaches Association has been helpful with providing guidelines. The organizations looked at teams from around the country and what they were doing and tried to figure out what was and wasn’t working.

“To be honest,” said MLAC instructor Leslie Becki, “as far as the organization of it, we are getting a lot cooperation. It’s very orderly, which in turns allows for a very effective workout. They are paying more attention.”

“All of a sudden the kids are paying more attention to this is where I am supposed to be,” he said. “This is my starting point. Since we have all the kids starting at the same time, everybody is swimming together. The level of focus has increased noticeably.”

Appreciation is also evident. Hoyson said the swimmers are punctual, getting to practice on time.

“They are all so grateful to have somewhere to swim again and to be back in the water. They are getting right in and right to work. Their attitude is different.”

So far this summer, MLAC coaches are seeing positive results in the pool.

“For the most part, everybody is doing their part,” said Kristufek. “They are being respectful and so far it’s going well.

“The kids are having fun,” he added. “We are all excited to be back in the pool and swimming.”

During their time out of the pool, the MLAC staff found ways to keep fit and on top of techniques.

Kristufek, who exercised on the Montour Trail, said USA Swimming provided “a whole bunch of things” for coaches and kids to keep active. By utilizing those resources he said, the staff was able to figure out how to swim better while being unable to be in the water. The staff emphasized dry-land training workouts.

“It was pretty cool,” said Hoyson, “whenever I was just running around Mt. Lebanon, I would see swimmers out for runs too. They were just as anxious as I was to be in the water and were finding ways to stay in shape.”

With the summer program, the objective is to return to “some semblance” of swimming condition, Kristufek said.

“It’s like a whiteboard. We are starting over, getting rid of bad habits and building up new, good ones,” he said.

The biggest thing swimmers tend to lose after a long layoff is a feel for the water.

“If you are doing a land sport, the fact of it is, you are walking around on land, you are utilizing your muscles in roughly the same way,” Hoyson said. “But imagine trying to play soccer or basketball without having walked for three months. That’s roughly what the challenge is here. You’ve lost a lot of that feel in the water.”

“There’s no other sport where you are told when to breath,” he said. “You have to really love it, to do it.

“Though everything is so different,” he added, “it’s really cool to see how they have all adapted. It’s almost normal.”

“Everybody is at a different point,” Kristufek said, “but we are all glad to see a pool. It’s going great and I think we’ve tried to figure out how to best fit swimming back into our lives in as safe a way as possible.”

Jake Hoyson is not the water rat that his fellow Mt. Lebanon Aqua Club coaches are.

While Mike Kristufek works full time for the swim club and Leslie Becki supplements her income as a manager at the Bower Hill swimming pool, Hoyson is a set-light technician by day, working on movies and television programs.

“I’ve worked on all the big movie projects that come into town,” said the 2004 Mt. Lebanon High School graduate.

Hoyson is known for his work on A Beautiful Day in the Neighborhood, The Cobbler and the Diamond, Actors On and Sweet Girl. The 34-year-old Kenyon College product also worked on Mindhunter, the American crime thriller web television series.

“They are big productions that are just as big or as involved as anything we would be shooting in Hollywood or Atlanta or Toronto or any of those big cities,” Hoyson said.

During the coronavirus pandemic, however, most projects were suspended. That put Hoyson on the unemployment line.

“It’s good to be back coaching here (with MLAC) or otherwise I would not have any work in any of my jobs,” said Hoyson, who swam at Lebo as well as Kenyon College. “Thanks to the club and throughout this whole pandemic, I have been able to have some income. It’s been a huge help. Really great,” he said.

By the end of summer or early fall, Hoyson anticipate production to pick up in the movie industry.

“I don’t see it happening any sooner than that. Until our industry figures out the ins and outs of resuming work with all the things we need to be aware of,” he said.

Hoyson used his talents to help MLAC figure out a way to resume workouts this summer. He directed a video that helped prepare swimmers for a return to the water. MLAC has been holding practices since mid-June at the Bower Hill Swim Club.

“When Jake has a vision,” said Adam Ryan, “it’s usually a good one. As a team we came up with the concept and he did the video.”

The production, which showed members how to practice while physically distancing and adhering to CDC guidelines, was made in four days. It was distributed three days before practices commenced.

“We have such a large group of kids so the video really helped,” explained Ryan.

“Visually, especially being at the pool and the ways to work out the social distancing, really worked out well. The first day, we had at least 130 kids in the water and there were no hiccups at all. Practices have gone on without a hitch thanks to Jake’s video.”