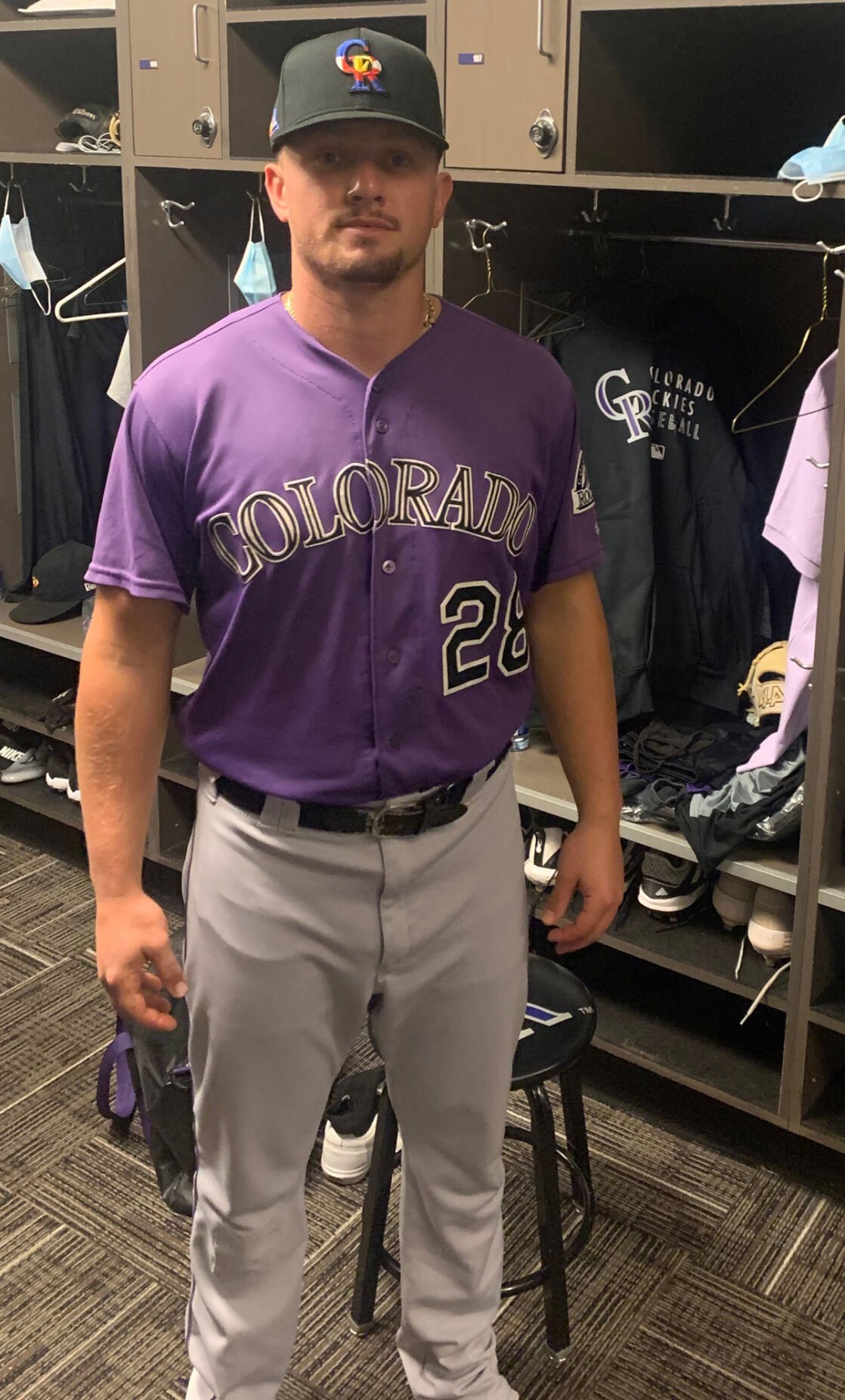 Austin Kitchen in the clubhouse at the Colorado Rockies’ training center in Scottsdale, Ariz. 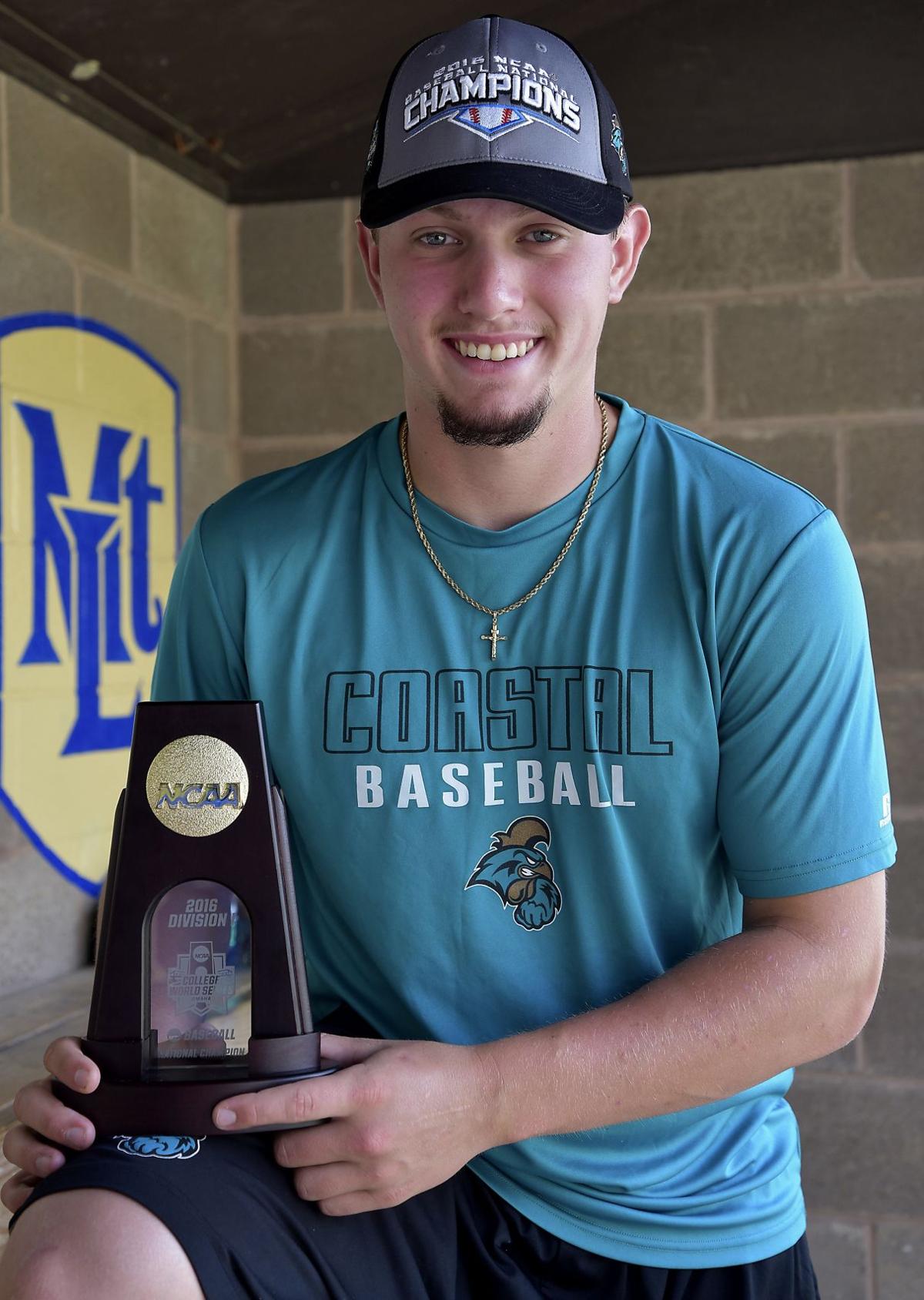 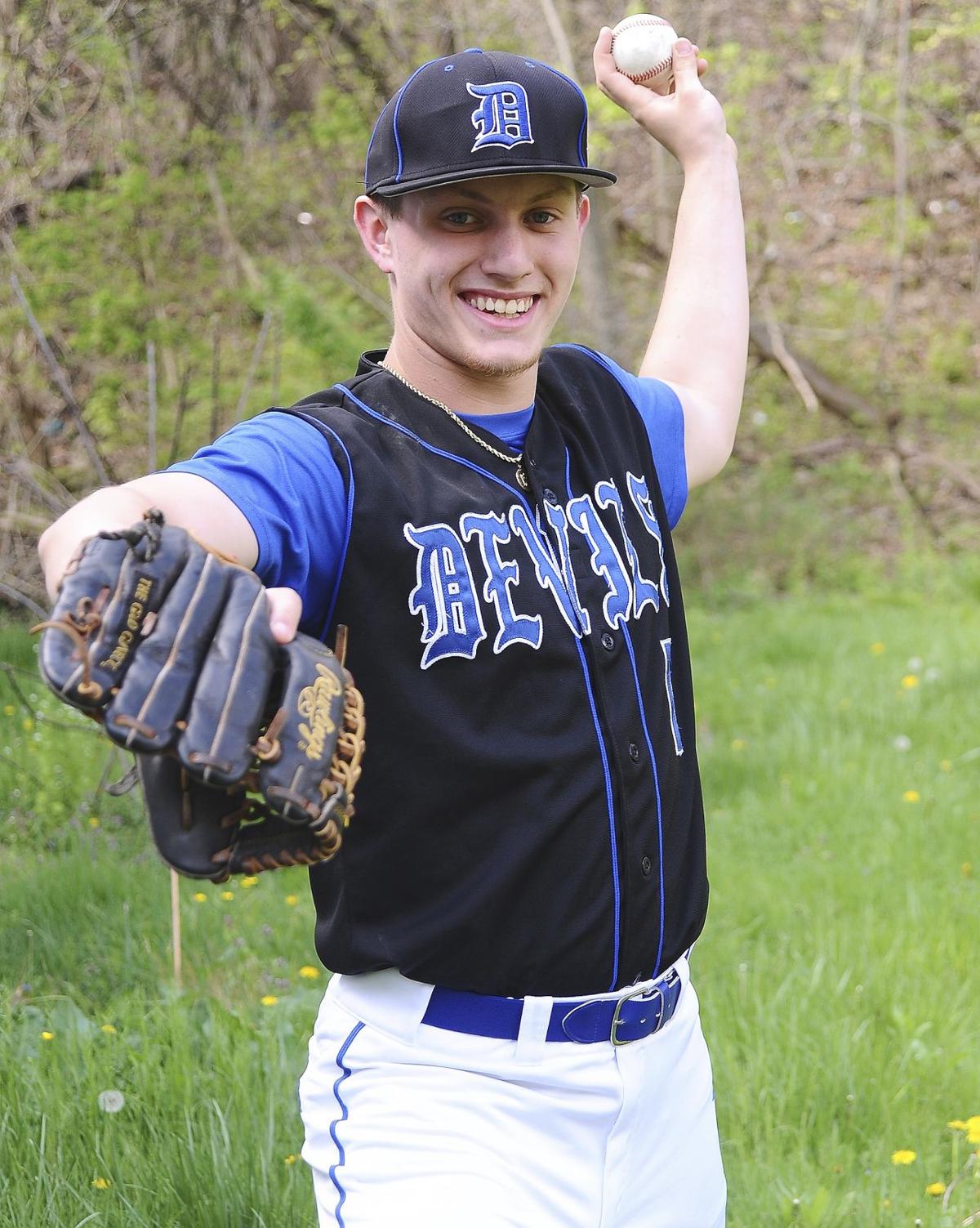 Austin Kitchen recently signed a contract with the Colorado Rockies. 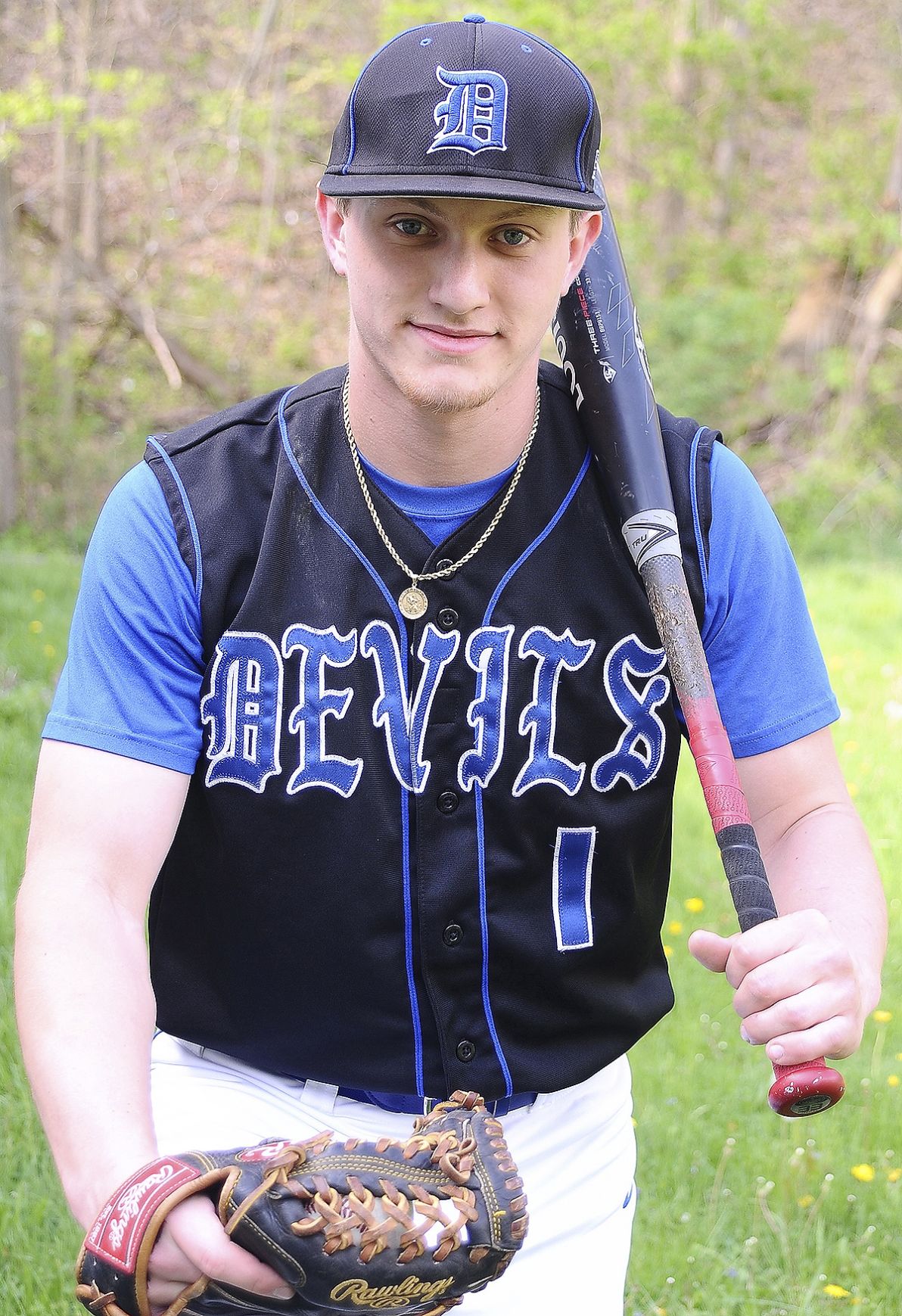 Austin Kitchen was The Almanac Most Valuable Player after his senior season at Mt. Lebanon where he struck at a school record 85 batters and posted a 6-1 mound record.

Austin Kitchen in the clubhouse at the Colorado Rockies’ training center in Scottsdale, Ariz.

Austin Kitchen recently signed a contract with the Colorado Rockies.

Austin Kitchen was The Almanac Most Valuable Player after his senior season at Mt. Lebanon where he struck at a school record 85 batters and posted a 6-1 mound record.

Austin Kitchen fantasized about playing baseball for a living.

The Mt. Lebanon native went the next step, however, and planned his path to the major leagues.

Kitchen recently signed a contract with the Colorado Rockies. He is now participating in the league’s extended spring training in Scottsdale, Ariz. He anticipated making his debut May 3 at the organization’s Salt River Field at Talking Stick facility.

“A goal without a plan is just a dream,” Kitchen said. “It doesn’t happen unless you put the work in. It takes execution.”

Part McCloskey, head coach of Mt. Lebanon’s baseball team, agreed. He coached Kitchen in high school when he compiled a 12-1 record in his final two varsity seasons and garnered multiple accolades from Quad-A Pitcher of the Year to The Almanac MVP.

“Austin possesses an absolutely relentless work ethic which is second to none,” McCloskey said. “He has been training as if he is a professional athlete for the past two years. He lifted nonstop, threw nonstop and trained nonstop. While he was always naturally talented, he has been out-working people since high school.”

Since the fall of 2019, Kitchen’s schedule from September through December had him kneading loaves of bread and rolling a thousand balls of pizza dough working the 4 to 12 p.m. shift at Cibrone’s Bakery in Castle Shannon.

From 7 a.m. to 7 p.m. from late December through May, he detailed cars at Rorhrich Cadillac, a stone’s throw from his apartment dwelling in Dormont.

All the while he found time to workout at the Mt. Lebanon Baseball Association’s indoor practice facility on Mayview Road in Bridgeville and complete his classwork toward his bachelor’s degree from Coastal Carolina.

“There were a lot of days where I was ready to hang it up, especially detailing cars because it was cold outside,” he said. “But I pushed through. No. 1, I had to put food on the table and pay the rent. I never quit. I never gave in because I had this goal.”

McCloskey and Chris Koutsavlis helped keep Kitchen on pace. They supplied their expertise.

McCloskey advised his former player on lifting and weight training. Koutsavlis, who is remembered for throwing the first no-hitter in PNC Park history when Lebo beat Blackhawk for the 2002 WPIAL Class AAA title, refined Kitchen’s mechanics and helped fix the flaws in his delivery.

“It was crazy times, but I am so very thankful for the people in my life,” Kitchen said. “They have all helped my development during each step of the process.”

A stint in the independent Frontier League paved the way to the pros. Kitchen threw 12 innings for the Steel City Slammin’ Sammies in pod play this past summer. The 24-year-old southpaw allowed 10 hits, two walks, struck out 11 and only yielded three runs, two of them earned.

“Playing with the Wild Things really helped develop me and prepare. I learned the speed of the game, how to carry myself around the field, how to prepare and call a game. Really, just how to be a pro,” Kitchen said.

At Coastal Carolina, he made an immediate impact on the 2016 NCAA championship team. He gained Louisville Slugger/Collegiate Baseball Freshman All-America status after posting a 4-0 mark with two saves in 21 appearances. Opposing hitters managed just a .185 batting average against him.

In 2017, Kitchen led the team with 24 appearances and six saves.

Kitchen competed in the Cape Cod League before he tore his ACL two weeks before the 2018 season.

The injury setback his career plans.

Kitchen was projected to be selected in the top 10 rounds of the amateur draft.

“Honestly, it was devastating,” he said.

McCloskey said he expects Kitchen to excel in professional baseball.

“This is an amazing opportunity especially in (today’s baseball) climate and Austin must have really impressed some people to get signed at this time,” McCloskey said. “He’s physically and mentally tough enough to withstand the grind and the pressure of professional baseball. I have no delusions about how hard it is to advance in pro ball, but I think he has the make-up to make the most of this opportunity.”

Kitchen said he will embrace the opportunity to work out of the Rockies’ bullpen.

“I like it way more because you get the opportunity to pitch maybe three times a week,” he said. “If you are a starter and it goes great, then good but then if you have a bad outing, then you are anxious to fix things and you have to wait some time to improve things. But being a reliever you can throw back-to-back games.”

After his training stint in Arizona, Kitchen hopes to be placed with one of the Rockies’ minor-league affiliates.

“The ultimate goal is to make the major leagues, but to be honest I have set no timetable,” he said. “I know it sounds so cliche, but I’m just taking it one game at a time. If I get the outs and put up the numbers, it will all work itself out. I just have to remain disciplined and dedicated because without either you never succeed.”